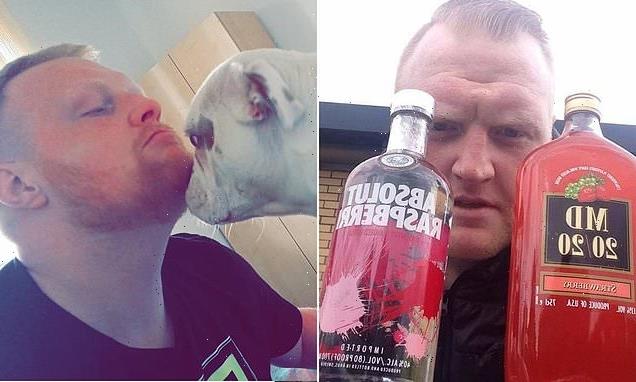 Britain’s most heartless crook: Drifter, 29, posed as a patient at hospital to rob an amputee who had just woken from a six-week coma to learn he had lost his leg

A drifter who posed as a patient on crutches at a hospital to rob a defenceless double amputee the day he woke up from a coma before he pushed his wheelchair into a wall has been jailed.

Liam Dallimore, 29, stole the bankcard of George McEwan-Jones, 67, which he used to spend on cigarettes after the vicious and callous attack.

McEwan-Jones, a father-of-one, had awoken just hours earlier to discover he had lost a leg and was accosted wearing only a surgical gown and sat in a wheelchair outside a WH Smith store at Manchester Royal Infirmary. 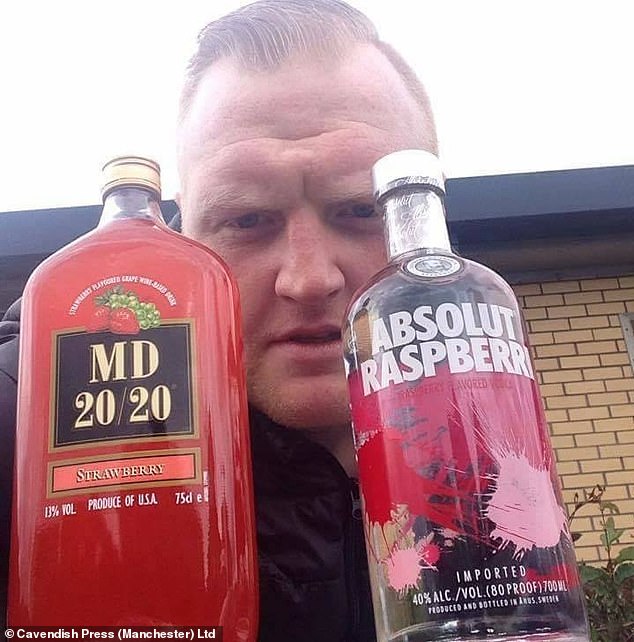 Liam Dallimore (pictured), 29, stole the bankcard of George McEwan-Jones, 67, which he used to spend on cigarettes after the vicious and callous attack

As doctors treated the victim’s wounds, Dallimore, 29, used the stolen debit card to try and withdraw £270 cash from an ATM before splashing out on cigarettes and getting cashback at a Morrisons supermarket.

In a statement Mr McEwan Jones who lost his right leg to deep vein thrombosis just four years after his left leg had to be amputated said: ‘I think it’s absolutely diabolical that someone could do this to a man with no legs.

‘How am I supposed to defend myself? This person must not have a heart to do such a diabolical thing.’

He added: ‘I had just come out of a coma when I was robbed in the Manchester Royal Infirmary. It was the first day I had been awake. I wanted to get a drink because I was so thirsty. Then this man has taken hold of my wheelchair and rammed me into a wall. 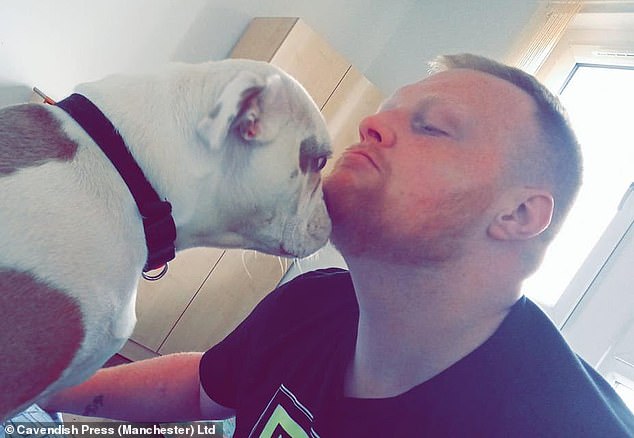 ‘When the robber pushed my wheelchair into the wall, I have had to use the stump of my left leg to stop the impact. The wound I suffered was about the size of a 50 pence piece and did not stop bleeding.

‘The whole incident affects me to this day. I feel very worried going out to the shops and I have to take medication to help me sleep.’

At Manchester Crown Court, Dallimore, originally from Glasgow and of no fixed abode, was jailed for 45 months after he admitted robbery and fraud by false representation. He refused to leave his cell and was dealt with in his absence.

The robbery at 1.30pm on July 14 this year occurred six weeks after Mr McEwan-Jones, from Salford had been admitted to hospital after collapsing unconscious with DVT.

David Lees prosecuting said: ‘He was in a coma for five to six weeks and came out of it to find his right leg had to be amputated. He had already had his left leg amputated sometime earlier.

‘Later that day he decided to use his wheelchair to go to the shops as he felt thirsty. he was still in his surgical gown and having no pockets, he sat on his mobile phone, keeping it under his legs.

‘He noticed Dallimore loitering outside the entrance to WH Smiths and noticed he was on crutches but not limping. Dallimore approached Mr McEwan-Jones asked him initially for £18 for taxi money then asked to borrow his phone to find out how much a taxi was. Dallimore, originally from Glasgow and of no fixed abode, was jailed for 45 months after he admitted robbery and fraud by false representation

‘Mr McEwan-Jones was reluctant to lend him the phone but offered to dial the number for him. He confirmed he had no money, thought the interaction had finished and went into WH Smiths where he bought a bottle of cola.

‘However it seems that Dallimore followed him inside and watched Mr McEwan-Jones make payment by using his pin number. Mr Ewan-Jones started to wheel himself out of the store intended to get back to the ward only to again become aware of Dallimore who approached the wheelchair, put the crutches on the back and pushed him out onto the corridor out of the main entrance into to the car park.

‘He continued to push him to a quiet area of the grounds and it was witnessed by a doctor working in a first-floor office. The doctor initially thought it was one patient doing another patient a favour by pushing him around but then he realised they were going towards a secluded area and he was suspicious as to what might happen.

‘As they got to the secluded area, Dallimore has grabbed Mr McEwan-Jones’s bank card from his right hand then pushed the wheelchair into a wall. He let him go and the chair went down a slope towards a wall. All Mr McEwan-Jones could do to stop himself from running into the wall was to use the stump of his left leg and the impact of the wall caused a wound the size of a 50 pence piece.

‘Dallimore even ran down the slope and grabbed the drink that Mr McEwan-Jones had just purchased before running off. Medical staff ran to Mr McEwan-Jones’s assistance. Nurses dressed the wound at the scene and took him back to the ward. Doctors looked for Dallimore but couldn’t find him. 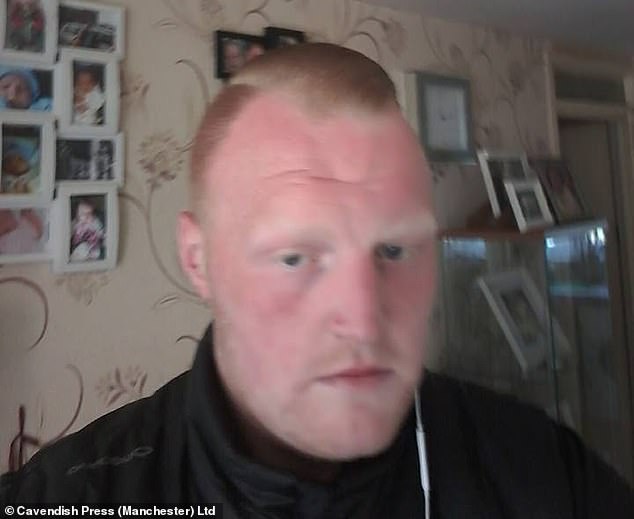 ‘Mr McEwan-Jones was on anticoagulants, and because of that, the wound wouldn’t stop bleeding. When the doctors came to the scene, they described him as bloodied and bruised. The impact was so hard that the doctor heard the impact. He heard Mr McEwan-Jones say, ‘Ah! My leg!’

‘He remained in hospital for a further four weeks after the incident. Subsequent inquiries revealed there was no record of Dallimore’s attendance at hospital on that day or any other day for treatment prior to there events. He wasn’t there for any legitimate purposes.’

Jailbird junkie Dallimore originally from Govan in Glasgow and was expelled from school when he was just five had 77 offences on his record including a 2020 assault on his own mother in which he spat in her face and said he hoped she would get coronavirus on her. He also had other convictions for battery, robbery and having a bladed article and had an addiction to heroin.

His counsel Daniel Calder said the robbery was ‘cruel and abhorrent’ but added: ‘His attendance at the hospital was to ask for treatment in relation to abscesses to his legs. He would wish the court to accept that the offence was opportunistic rather than planned.’

Sentencing the judge Mr Recorder Michael Maher said: ‘Medically speaking, the last four years have been grim for Mr McEwan-Jones and Dallimore then took advantage of him. He effectively abducted him by grabbing his wheelchair and controlling his movements. It is clear that he did opportunistically target a man, and the circumstances in which he did target him most right-thinking people would think as appalling.

‘A doctor initially thought the defendant was acting in a selfless manner. How wrong he was. This defendant in fact acted with utter contempt for Mr McEwan-Jones, casting him aside as though he was a piece of rubbish. He was completely helpless.’

After the case Det Con Anthony Calvert of GMP’s Operation Valiant team, said: ‘This was a horrific assault on a particularly vulnerable victim who had just undergone major and life-changing surgery. This was clearly a premeditated assault and Dallimore was on the prowl for a victim he knew would be unable to defend themselves, clearly demonstrating how much of a coward he is.

‘No one should ever be made to feel unsafe particularly in a care setting such as a hospital.’