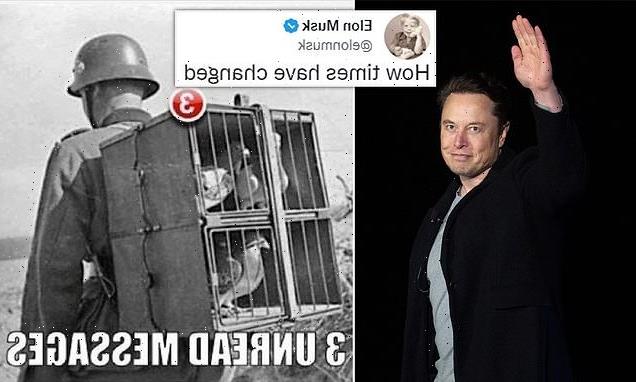 Chief Twit Elon Musk has found himself in hot water after posting an insensitive joke with an image of a Nazi soldier.

The Tesla and Twitter CEO posted a photo of a World War II soldier with a crate and three carrier pigeons on his back and the caption ‘three unread messages.’

Musk, the world’s richest man, then commented ‘how times have changed’, before adding: ‘Back when birds were real. But if Twitter is bird, that’s means….’

He compared the pigeons in the image to Twitter’s own blue bird to his 115 million followers, with the image of the soldier sparking outrage.

Users picked up that it was of a Wehrmacht soldier from Nazi Germany, but it did not feature any obvious insignia.

One, who claimed they were a ‘descendant of ta survivor of the Holocaust’ called the post ‘unacceptable beyond belief’.

They said: ‘It actually sickens me … there must be consequences for using such images. Advertisers should withdraw their spend on Twitter.’

The picture is of a German Wehrmacht soldier, part of the unified Nazi armed forces, carrying messenger pigeons on the Western front during the German invasion of France, known as the Battle of France, in WWII, circa May 1940.

It carries a warning on Getty that it may contain ‘themes, or have descriptions, that do not reflect current understanding.’ 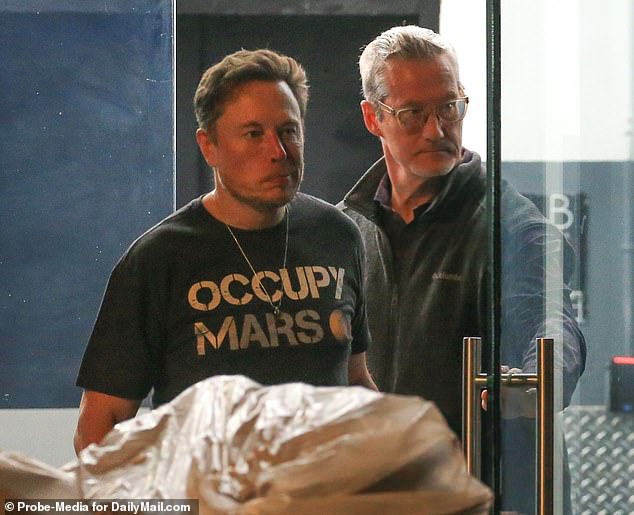 Elon Musk has found himself in hot water after posting an insensitive joke with an image of a Nazi soldier. He is pictured here leaving the Twitter headquarters in New York City 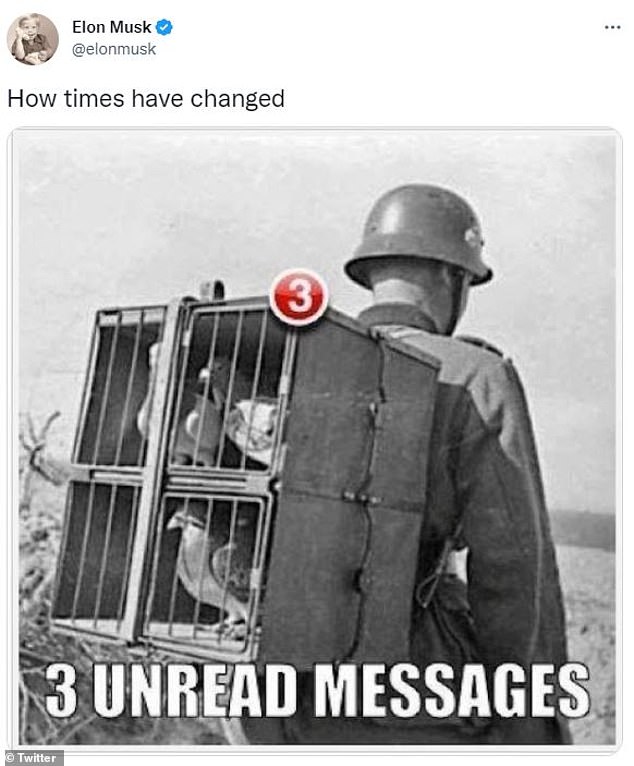 Musk, the world’s richest man, then commented ‘how times have changed’, before adding: ‘Back when birds were real. But if Twitter is bird, that’s means….’

Human rights lawyer Arsen Ostrovsky pointed out that it was of a Nazi soldier, asking Musk if it was ‘intentional’.

Some were quick to point out that it did not show any actual insignia, but others were angry at the way he chose to depict his off-color joke.

Musk, who has dubbed himself the ‘Twitter Complaint Hotline Operator’ has kept the post up despite the backlash.

It comes after reports claim the CEO could put the social media giant behind a paywall in an attempt to monetize the site.

The company reports that it has gained users since Musk took over the site after his $44billion buyout.

The 51-year-old billionaire has been discussing the idea of creating a paywall for all Twitter users with tech investor David Sacks, sources familiar with Musk’s plans told Platformer on Monday.

The proposal comes as the company reported that it has actually gained more users since he became the CEO, tweeting over the weekend: ‘Twitter user numbers have increased significantly around the world since the deal was announced.’ 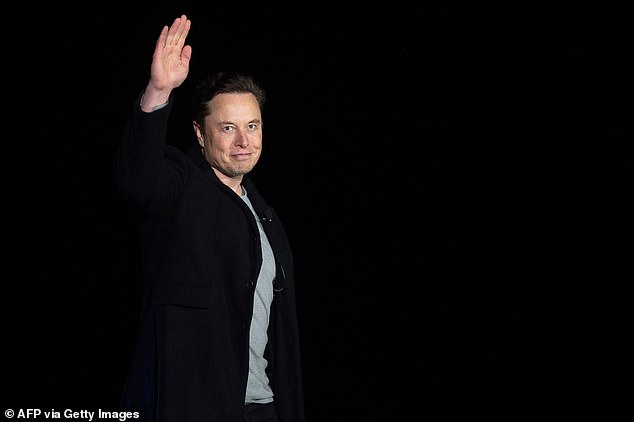 Musk, who has dubbed himself the ‘Twitter Complaint Hotline Operator’ has kept the post up despite the backlash 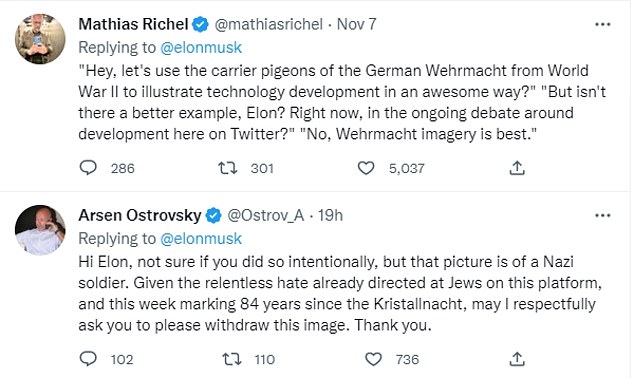 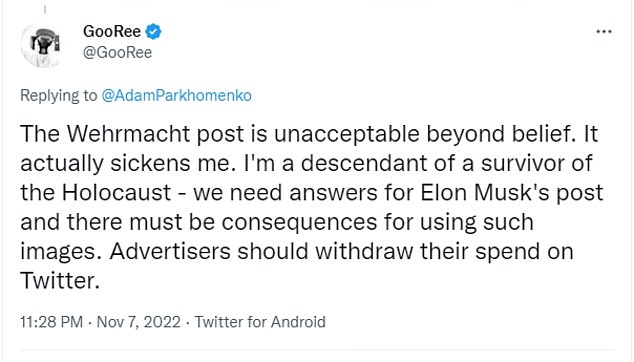 Hundreds of users hit out at Musk for using the image of the Nazi soldier, with one calling it ‘unacceptable beyond belief’

It remains unclear what a paywall for Twitter may look like, but one person familiar with the plans said an option would be to allow everyone to use the site for a set amount of time each month, and pay a subscription to keep browsing.

The amount a user spends to get past the paywall would then be in addition to the $8 Twitter users could spend each month for verified blue check marks as Musk seeks to monetize the site he bought for $44billion.

But the SpaceX founder is also struggling to hold on to the sites existing revenue streams after several advertisers fled the site amid fears that the platform won’t be a ‘safe place for brands.’

In one apparent attempt to get advertisers like General Mills, Audi and Pfizer back on the site, Twitter executives distributed an internal FAQ to its sales team on Monday to refer to when talking to potential advertisers.

The FAQ, obtained by The Verge, stresses that more users have been joining the social media site since Musk took over.

It says that Twitter’s monetizable daily users — a measure advertisers use to determine profitability of a site — has grown more than 20 percent while ‘Twitter’s largest market, the US, is growing even more quickly.’

According to the FAQ, Twitter has added more than 15million daily users who are able to see ads (mDAUs) ‘crossing the quarter billion mark’ at the end of the second-quarter, when it stopped reporting financial information as a public company.

At that time, Twitter reported that it had 237.8million mDAUs and a 16.6 percent yearly growth rate. 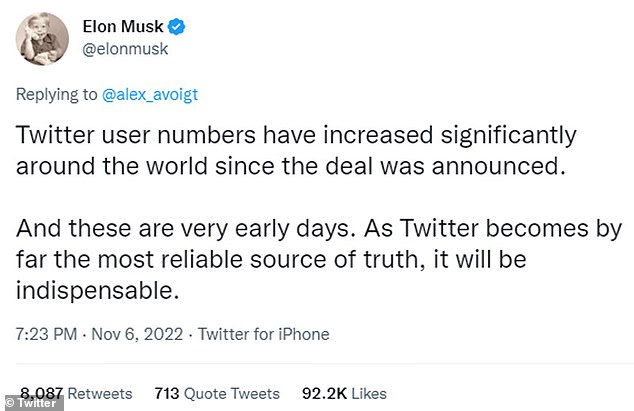 Over the weekend, Musk tweeted that ‘Twitter user numbers have increased significantly around the world since the deal was announced’

Twitter rolled out the new subscription plan over the weekend, only to later postpone its launch until after the midterm elections.

As part of the revamp, the company — largely via Musk’s personal account —said it will be launching new features, like reduced ads, the ability to post longer videos and a feature that allows users to receive priority ranking in replies, mentions and searches.

But the proposal has been met with much skepticism amid Twitter employees and users alike.

The existing version of Twitter Blue only had a little more than 10,000 subscribers, according to Platformer, and the new version will be 37.5 percent more expensive, requiring verified account holders to pay $8 a month to keep their blue check mark.

Employees had reportedly tried to sell Musk and Sacks on the idea of just asking business accounts to pay for the extra features, since many use Twitter to reach larger audiences.

And, as some employees pointed out, the new feature that would cut ad loading time in the Twitter app by half would also cost the company revenue, with some estimates showing that Twitter will lose about $6 in ad revenue per user in the United States under the scheme.

But, Platformer reports, those ideas were dismissed in favor of offering wide-scale verification — though it remains unclear how many people or businesses would sign up for the new experience.