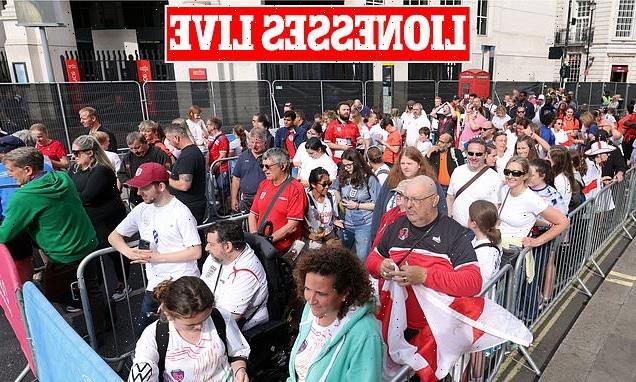 Follow MailOnline’s coverage here as thousands of fans gather at Trafalgar Square in London to celebrate England’s Euro 2022 victory with the Lionesses team:

Among those at Trafalgar Square today is Lindsay Parslow, 32, who says the Lionesses’ win was a ‘big thing for women’s football.’

‘It’s more out there, more noticed – because it wasn’t before. And let’s be honest, they beat the men!’

Ms Parslow, from Rochester, Kent, was in London for the celebrations alongside her partner and sons, aged 10 and 12.

She said she thinks her sons, who are ‘big football fans’, will now start taking more notice of women’s football. 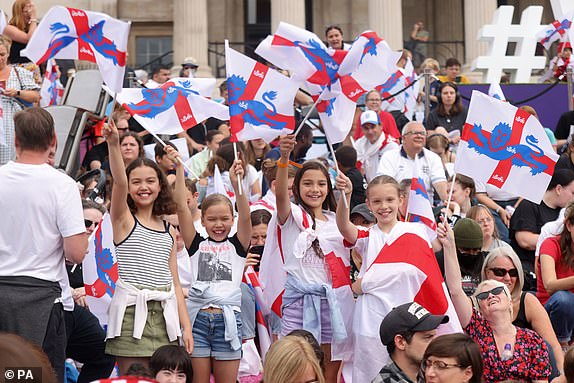 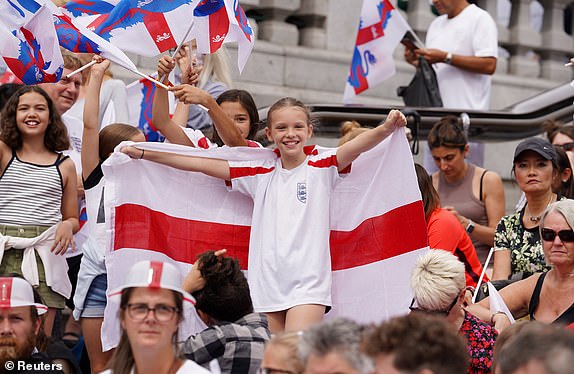 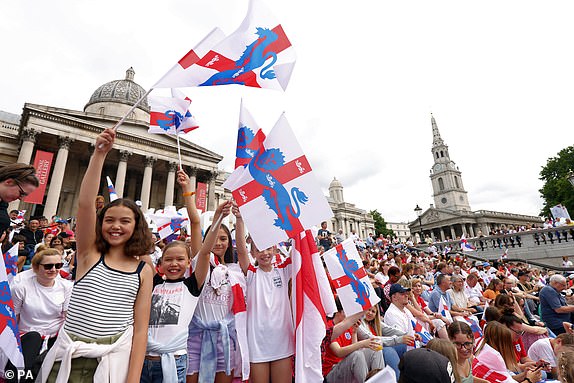 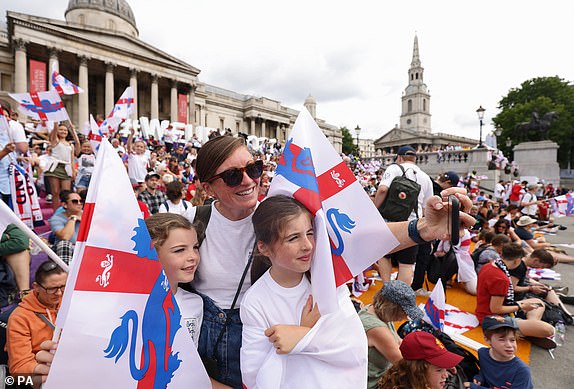 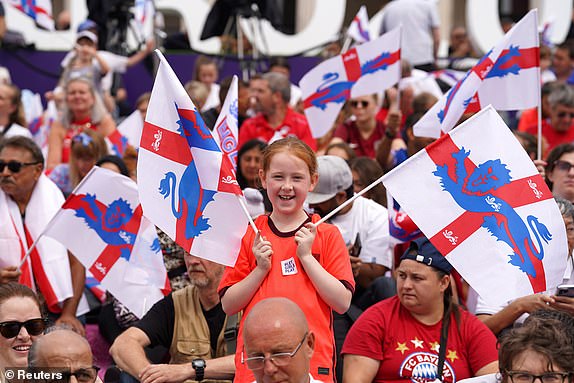 The BBC’s Emma Sanders has just tweeted this video of thousands of fans waving flags as they gather at Trafalgar Square for the celebrations:

The victory party at Trafalgar Square is filling up! pic.twitter.com/qfRE2axPDY

Thousands of supporters, many draped in England flags and wearing replica shirts, queued outside the fanzone at Trafalgar Square in London today ahead of the Euro 2022 victory celebrations.

Among them was Chris North, 52, who said it was ‘amazing’ to be able to celebrate the victory with his two children.

‘My wife’s an ex-women’s rugby player so we always had women’s sport in our family, but they were so inspiring last night,’ he said. ‘The game was so exciting to watch. It’s definitely a new dawn, which is fantastic.’

He said his six-year-old daughter is excited to see her ‘new role models’. Mr North said it’s ‘about time’ that women’s football received the ‘level up’ it deserved.

‘There are still massive discrepancies between the two, and this is only going to help, because it’s just not fair – not in today’s society,’ he added.

‘Cheated at Wembley again!’ is how the country’s largest tabloid, Bild, summed up a night of broken dreams at the home of football, harkening back to Geoff Hurst’s infamous goal 56 years ago that helped England to a 4-2 World Cup final win. Read more on MailOnline here:

People have taken to social media to share memes about England’s victory, with pne sharing a mock image of the country’s men’s team line up, supposedly chosen by manager Gareth Southgate, depicting the women’s team overlaid with moustaches:

England fans are arriving at Trafalgar Square in London ahead of a fan celebration to commemorate the historic Women’s Euro 2022 triumph: 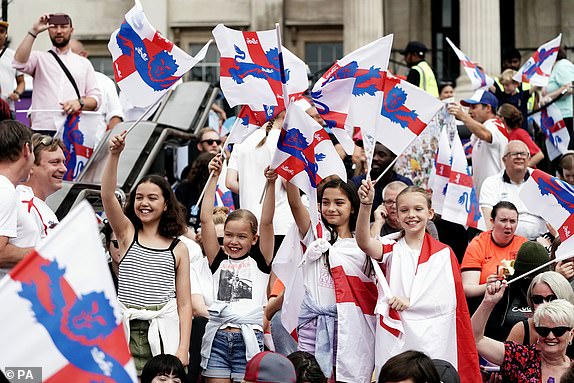 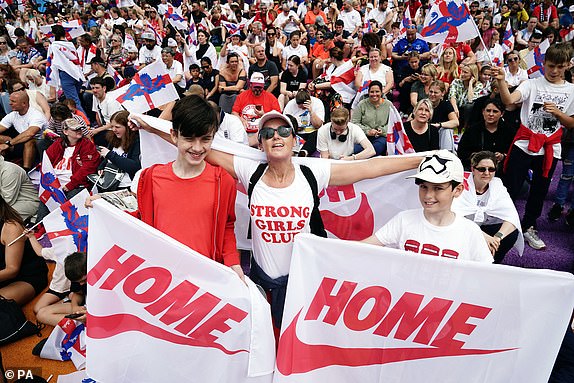 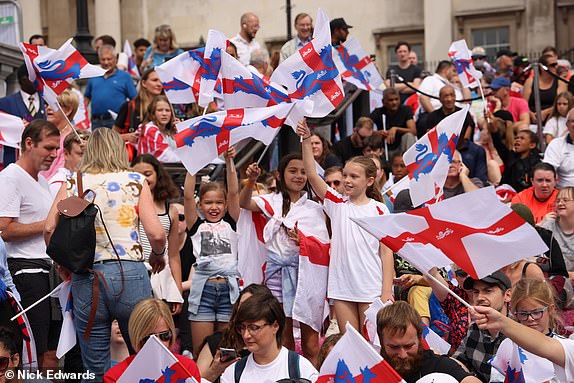 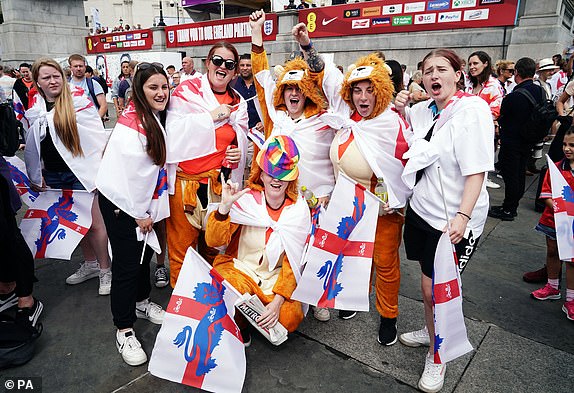 England’s Euro 2022 final with Germany attracted a peak TV audience of 17.4 million, a record for a women’s football match in the UK, according to overnight ratings released by the BBC.

The previous record was set during England’s 2019 World Cup semi-final defeat by the United States, which enjoyed a peak audience of 11.7million.

Read more: Chloe Kelly taking off her shirt is hailed as ‘instantly iconic’

The moment Chloe Kelly whipped off her shirt to run across the pitch in her sports bra after scoring the winner in the Euro 2022 final has been hailed by fans as ‘feminist image of the decade’. Read more from MailOnline’s Femail team here:

Find out more on MailOnline about Chloe Kelly, England’s match-winner who was the youngest of seven children and embraced the sport from the moment she followed her five brothers to a caged gravel pitch on the Windmill Park Estate in West London:

England’s pride of heroic Lionesses have emerged from their hotel including matchwinner Chloe Kelly following a night of partying until 4am ahead of the Trafalgar Square victory party.

Photographs show England fans gathering at Trafalgar Square in London today to celebrate the country’s 2-1 victory over Germany in the Euro 2022 final: 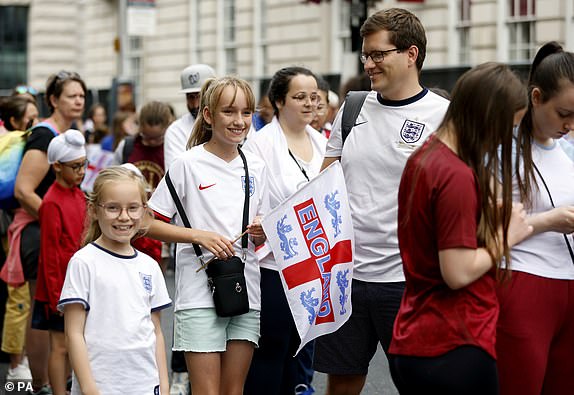 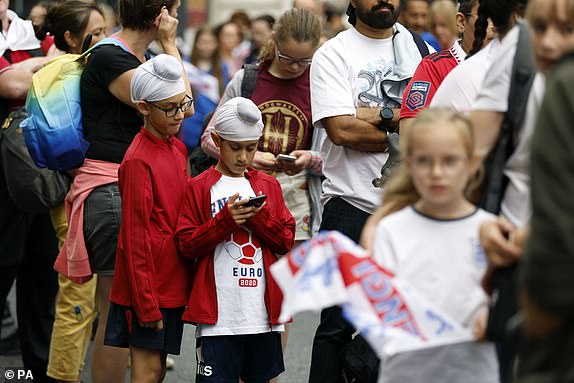 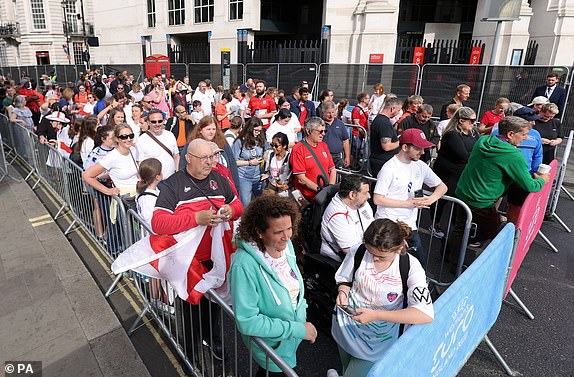 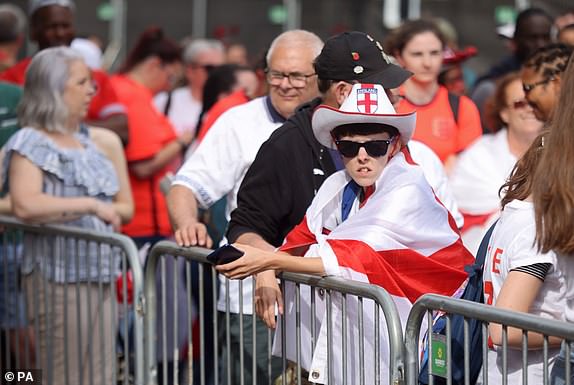 Up to 7,000 supporters will be able to gain free entry on a first-come first-served basis at Trafalgar Square from 11am today.

Fans will be able to bring their own food and disposable or reusable water bottles – except glass – on site, with free water refills also available.

The event celebrating England’s historic Euros win will be broadcast live from Trafalgar Square on BBC One and BBC iPlayer from 12.40pm. It is expected to end at 2pm.

Good morning and welcome to MailOnline’s liveblog as thousands of fans celebrate England’s win at Euro 2022 with the players at Trafalgar Square.

Up to 7,000 supporters will have the opportunity to join the team for the event in London hosted by veteran Lioness Alex Scott.

Supporters will be able to gain free entry on a first-come first-served basis from 11am this morning.