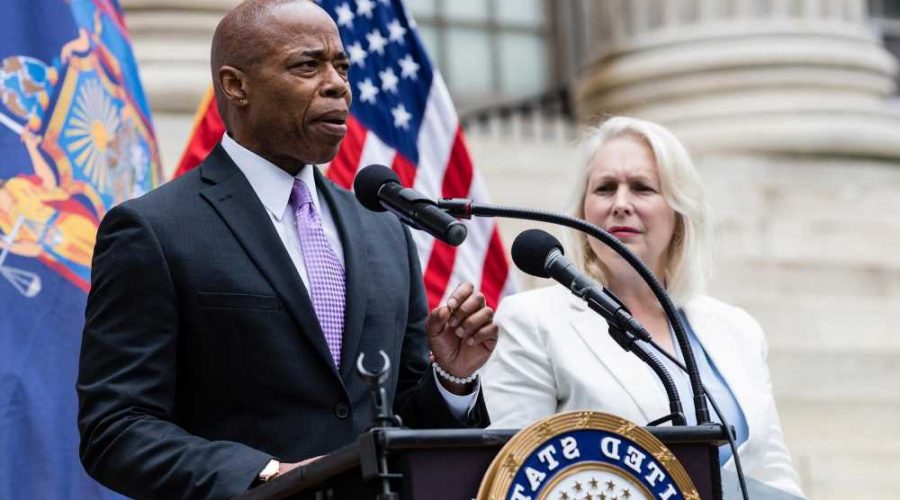 “Let’s sit down with law enforcement experts, those who have advocated for reform,” Adams, the current Brooklyn borough president and a retired NYPD captain, said at the event citing the National Organization of Black Law Enforcement and The Guardians Association of The New York State Courts.

“Let’s look at the list: are there crimes on this list that should not be there? I don’t believe any predatory crimes — the seven majors — should be on the list,” Adams said.

Most of those violent offenses — murder, manslaughter, rape, assault with intent to kill, arson, burglary, larceny — are already excluded from bail reform but some types of grand larceny and burglary are included. The state reforms, passed in 2019 and then revised in 2020, limit the types of offenses for which judges can require bail.

“We should definitely not be allowing a person that discharges a gun to be out the next day,” Adams said.

“They should not be out based on technical reasons. We need to have violent offenders incarcerated until the trial has determined if they committed a crime or not if they cannot meet the bail requirements,” Adams said.

Ramon Gil-Medrano, 16, had three open gun cases against him including an armed carjacking when he was killed in a Bronx gang war earlier this month.

Adams also said judges need to keep people locked up where the law allows it.

“Judges need to do their job and give bail. The strange thing about this is if you do an analysis on the cases where you can give bail, there’s a reluctancy to give bail. We cannot allow the slogans and bumper stickers to make their way into our courtrooms and impact the actions our judges are taking,” Adams said.

Adams spoke about changes to bail reform with reporters after joining Gillibrand (D-NY) to call for passage of a law that would criminalize gun trafficking across state lines. The bill was originally created in 2009 at the behest of then NYPD Commissioner Ray Kelly.

“When I first wrote this bill it was with Commissioner Kelly. He sat down with me and said, ‘We don’t have the authority to cross these state lines to go after these guys who are bringing guns into our city and giving them straight to gang members and I need it,” Gillibrand recalled Monday.

The bill gained 58 votes immediately after the Sandy Hook shooting in 2012. Gillibrand, who once earned an ‘A’ from the National Rifle Association, thinks she’ll have the votes to pass it now in part because “the NRA has declared bankruptcy” and is “in a tailspin.”

Adams said he backs the bill because, “We have a growing gun crisis in this city- shooting incidents are up 22 percent, shooting victims are up 29 percent. In Brooklyn alone 306 people have been shot year to date.”

Opponents to the bill have said similar laws are not enforced.