The European Union is set to spend an extra three million euros on funding private jets for its officials, while also aiming to be a ‘global climate leader’.

Although still two years away from the ‘air taxi’ contract ending, the EU has decided to raise the amount that can be spent to €10.71 million, a 50 per cent increase on the starting amount.

Originally the deal, which runs from 2016 to 2021, had a value of €7.14 million but it is not thought that will not cover all the travel needed, reports Politico.

When agreed two years ago, the contract was for an estimated 871 flight hours and to destinations including Strasbourg, Berlin and Stuttgart. 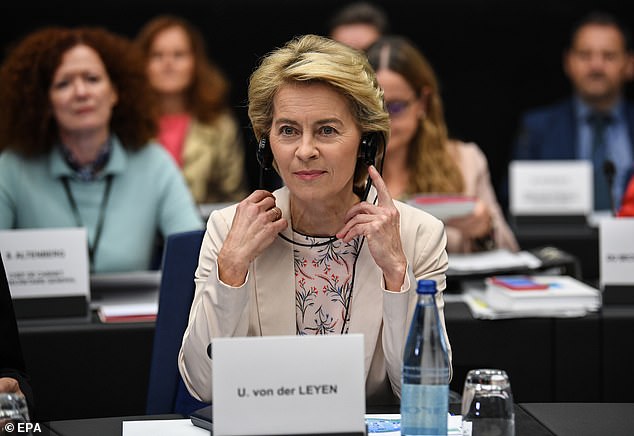 The EU has increased the amount that can be spent on private jet ‘air taxis’ for its top officials to €10.71 million. Pictured is EU Commission President-elect Ursula von der Leyen

Yesterday the European commissioner for climate action and energy Miguel Arias Cañete said: ‘The EU has a strong story – we are global climate leaders.’

His comments came during the UN’s Climate Change summit in New York where activists including Greta Thunberg have spoken.

Speaking in a video shared on Twitter he added: ‘We are the world’s biggest donors of climate finance. 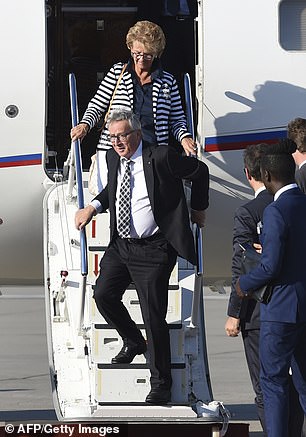 Commission President Jean-Claude Juncker, pictured in Hamburg in 2017, has faced criticism for using private jets in the past

‘It is important to us that all parties in the Paris Agreement play an active part, as it’s the only way to reach our common goal which is to reverse the dangerous global warming.’

The German politician pledged to present a European Green Deal within her first 100 days in office.

However despite this apparent commitment to change, the decision to increase the ‘air taxi’ contract was published earlier this month on the EU’s tenders database.

The document said: ‘Analysis of expenditure during the period already elapsed has led to the conclusion that this threshold will not be suffice to cover the needs of the European institutions until the expiry date of the contract.’

It also explained that the fund was for travel used by the President or other members of the European Commission, for the European Parliament Presidency.

The President of the European Council, for the High Representative of the Union for Foreign Affairs and Security Policy, and any accompanying people, mostly in the European Union, were also listed on the contract. 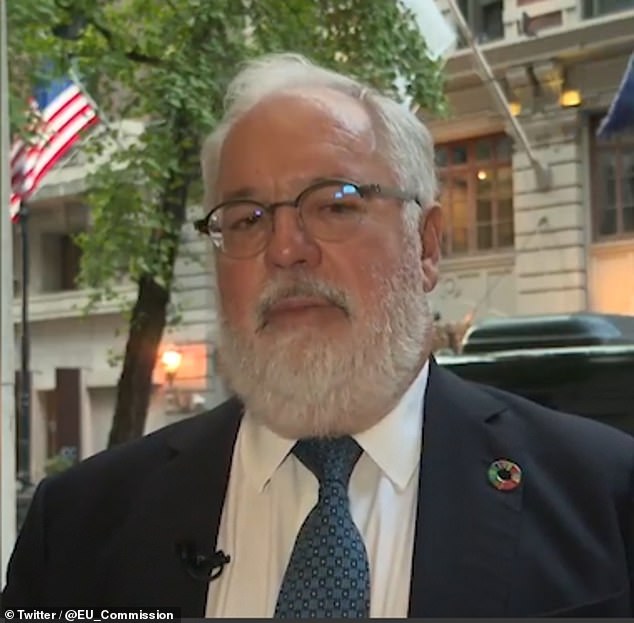 Miguel Arias Cañete, pictured, said the EU are ‘are global climate leaders’ during a video shared on Twitter yesterday. He is in New York for the UN’s climate change summit

Originally the contract was awarded to Luxaviation Group’s Masterjet, Unijet and Abelag for an estimated 871 flight hours.

Outgoing EU Commission President Jean-Claude Juncker has faced criticism for his use of private jets in the past, according to Daily Mail analysis.

Last year he chartered private jets for 21 out of 43 official trips between January and November, racking up a bill likely to have ran into hundreds of thousands of pounds.

The cost of one private jet for a one-night trip to Tunisia alone was up to £32,943.

The EU Commission declined to give the exact bill, but confirmed that Mr Juncker flew with a 13-person delegation and that travel costs averaged £2,357 per person.

Commission rules state ‘air taxis’ should only be used when no suitable commercial flights can be found.

European Council President Donald Tusk took 23 ‘air taxi’ flights in 2018 and five of these were provided by the Belgian air force, according to Politico.

A Commission spokesperson told Politico that just because the budget on the contract has been increased, it may not all be used.

They said: ‘The amended contract just provides a guarantee that the threshold will be sufficient to cover the needs of the EU institutions for the remaining period.’