We called it the “Silicone Line of Rochester”, even though it was just a seal over an air vent about 30 centimetres above the ground at our motel.

Yet, the line came to symbolise much more – a marker of the flood’s intensity when the murky water surged above it and a trigger for celebration when it re-emerged later. 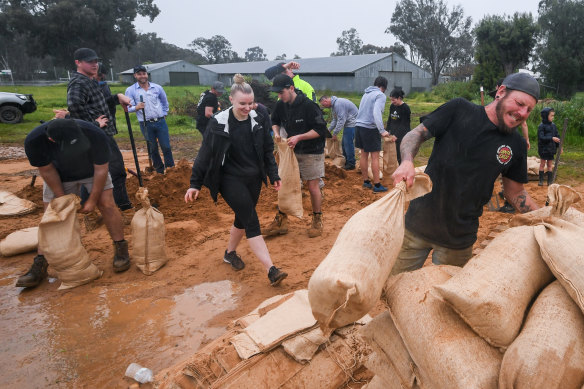 The north Victorian town was engulfed in disaster during my five days there – pelting rain followed by torrents raging in the streets that swept into homes and left thick sludge behind.

But that was long enough to feel momentarily entwined with the community – a bond shared by surviving the worst floods in memory together.

When Age photographer Justin McManus and I arrived, Rochester Motel owner Meagan Keating assured us her place had remained dry in the 2011 floods.

It would take a calamity to exceed that event. 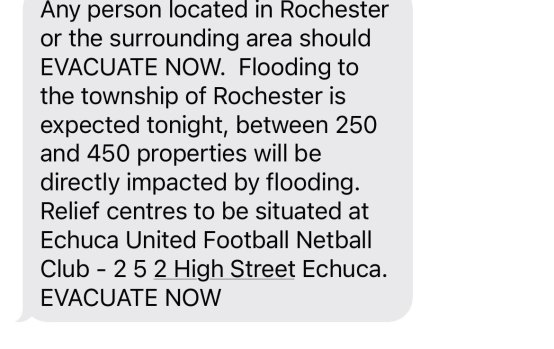 But at 5.18pm the next day, my phone pinged with a message from an unknown number warning floods would hit up to 450 properties.

“Any person located in Rochester or the surrounding area should EVACUATE NOW,” the message read.

I fought the urge to panic, but we had an important job to do, so we stayed. And then we went to the pub.

Over dinner, Justin and I decided we had a duty to report on the people who were leaving or staying, and then make our own plans.

The rain cleared by dawn. We drove to the swollen Campaspe River, which was slowly spreading toward surrounding houses.

While TV news crews sent live crosses from the town centre and roads filled with water, we decided to find a household staying put and experience part of the flood with them.

In our dark green waterproof waders, we pushed through the currents surging down the streets.

Justin, who is about a head taller than me, walked a few metres ahead, feeling his way with his feet to avoid gutters and potholes covered by the dark rolling water. 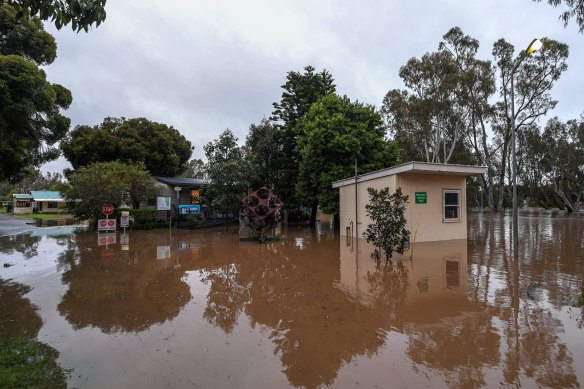 In the depth of disaster, the Mulcahys welcomed us. Glenys gave us bottles of water and apologised that she couldn’t offer us a proper lunch.

By the time we waded back to the motel in thigh-high water, the other news crews had left. We were the last guests remaining. It was too dangerous to leave.

Meagan, her husband Matt and their friends built a sandbag wall. We sat behind it, watching water creep up the driveway. 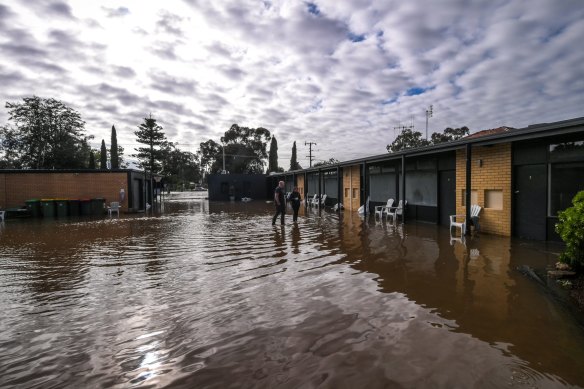 Owners Matt and Meagan Keating in the car park of the Rochester Motel on Saturday.Credit:Justin McManus

I climbed onto the roof to find the town quiet and strangely serene, in contrast to the noise of a thunderstorm or raging fire.

The four of us ate dinner as darkness fell, and the floodwater pushed against the sandbags. Our initial hope it would not reach this far crumbled.

The night wore on, and the water streamed in, sometimes at seemingly impossible angles. It stormed into a downpipe and sprayed up through holes in the metal, continuing its relentless march across the car park towards our rooms. 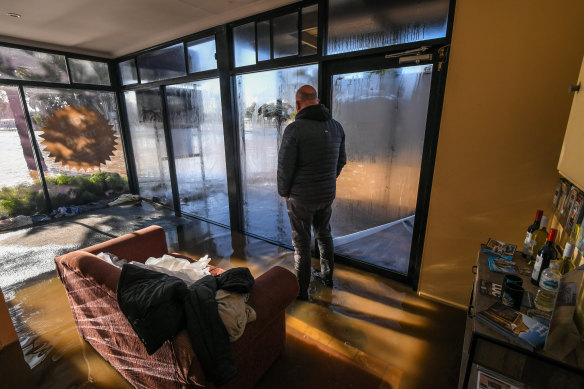 We retreated further back on plastic chairs and briefly discussed escaping on a boat in the dark with the river stubbornly refusing to peak.

At that point the silicone line was lost beneath the chocolate-brown water,

If the water reached knee height, we decided, it would be safest to climb a ladder and spend the night on the roof. I felt a rising dread we may be stuck for days.

By then the water trickled across the carpet of my room and bubbled up through air vents and holes in the ground. The bubbling continued through the night. Somehow we slept. 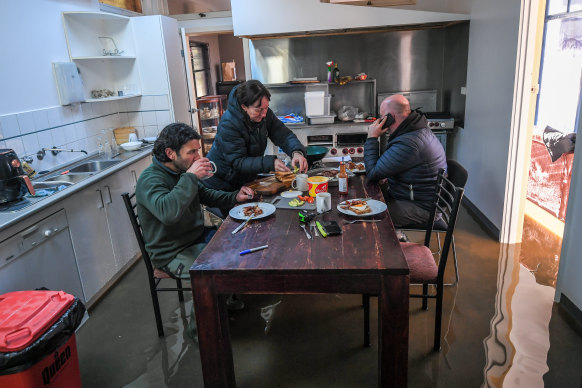 I woke to find the water had only risen a couple of centimetres in my room, stopping short of my mattress. But there was further relief: the river had peaked.

Matt and Meagan had already woken and prepared breakfast in their flooded kitchen. We ate bacon and eggs and drank instant coffee with water lapping our ankles.

Outside, the ground and the swimming pool began to reveal themselves as the car park reclaimed its original form.

Friends of the Mulcahys dropped by, casually recounting how they’d helped ferry elderly people to safety in the darkness – incredible acts of bravery.

By Saturday night the water was dropping steadily, and we celebrated with local red wine into the night.

We danced in the kitchen and Meagan jumped onto the table – a victory dance at having survived together.

Before coming to Rochester I used to puzzle over why anyone would want to rebuild in a flood-prone area.

Now I see how, for many in Rochy, the community spirit is enough for them to stay.

But with more rain coming and the ground already saturated, I worry there is another flood coming.

I desperately hope they will not need the silicone line again.