Authorities say seven people on the ground have been injured in the crash of a Navy jet in California's Mojave Desert.

There's no word yet on what happened to the pilot of the F/A-18 Super Hornet, which went down during a training mission Wednesday morning. 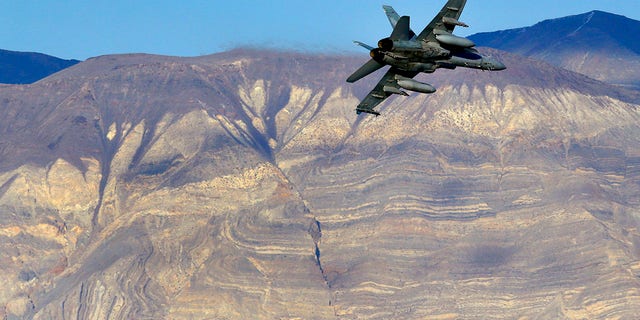 FILE – In this Feb. 27, 2017 file photo, an F/A-18D Hornet from the VX-9 Vampire squadron at Naval Air Weapons Station China Lake, flies out of what is known as Star Wars Canyon toward the Panamint range in Death Valley National Park, Calif. On Wednesday, July 31, 2019 a U.S. Navy F/A-18 Super Hornet jet crashed Wednesday in the California desert and a search-and-rescue operation was underway, officials said. The single-seat warplane went down at 9:50 a.m. during a routine training mission north of the China Lake base. (AP Photo/Ben Margot, File)

The crash area is about 60 miles (96.5 kilometers) north of the Naval Air Weapons Station at China Lake.