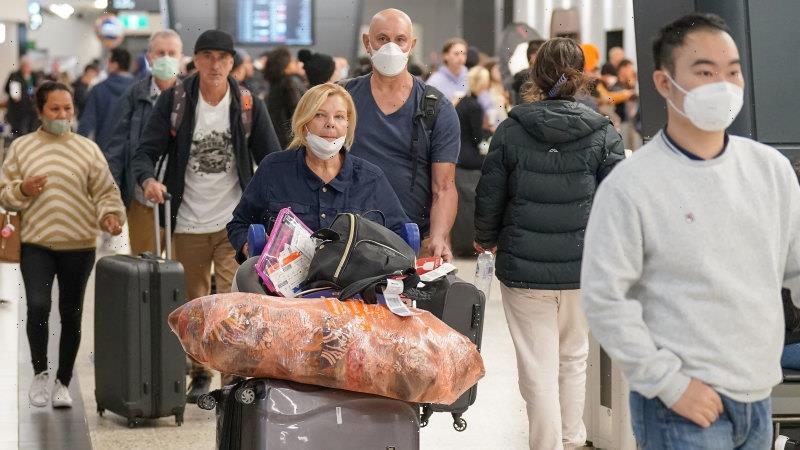 Holidaymakers returning from Indonesia say they faced little scrutiny as they passed through customs, despite the federal government insisting it was rolling out biosecurity measures at airports as quickly as possible to prevent a catastrophic foot and mouth disease outbreak.

On Saturday morning, weary travellers toting surfboards through Melbourne and Sydney airports reported few additional measures, aside from an extra announcement on their flight from Denpasar.

The federal government on Friday announced what it said was the toughest biosecurity rules ever introduced at Australian airports, including requiring passengers flying from Indonesia to walk over sanitisation mats, and clean their shoes.

But travellers arriving on Saturday said they were not asked to clean their shoes on sanitisation foot mats while going through customs, nor were they asked if they had cleaned the dirt from their belongings.

The detection of foot and mouth disease in Bali has triggered fears of a catastrophic local outbreak, with more than 120,000 people travelling to the island from Australia in June, according to local tourism authorities. 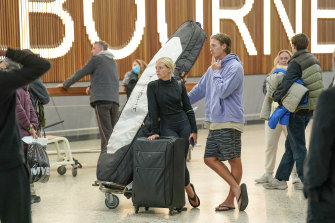 Geelong pair Georgie Allen and Sean Holroyd returned to Melbourne on a flight from Denpasar on Saturday.Credit:Scott Barbour

Just one positive case of the disease – which causes lesions and lameness in livestock – on an Australian farm could halt the $27 billion livestock export trade for months or even years. The federal government has estimated the total cost of a major outbreak to be $80 billion.

Federal Agriculture Minister Murray Watt told The Age and The Herald on Saturday that sanitisation foot mats had arrived at airports and were being “rolled out as quickly as possible”.

He said as part of the ramped-up customs measures, there would be “100 per cent risk assessment” of passengers flying from Indonesia.

“It’s excellent to see travellers following the advice and throwing away or thoroughly cleaning their shoes before returning to Australia,” he said.

Asked whether measures to combat an outbreak should have been put in place at airports by now, Victorian Employment Minister Jaala Pulford, a former agriculture minister, suggested it required time and preparation.

But she said Victoria was better prepared for an outbreak than the rest of the country, having introduced a mandatory tagging system for sheep and goats.

“The messaging for people arriving from overseas, and particularly Indonesia, has geared up over recent days,” Pulford said. “Our Agriculture Victoria team are working with our farming communities; they know what they have to do. Animal biosecurity is their bread and butter. They know how important it is.”

A pamphlet handed out to travellers on arrival in Australia urged them not to bring meat or dairy products into Australia and to clean any shoes and clothing used in rural areas. The flyer warned of $2664 fines for breaching biosecurity laws and the potential for tourists to be denied entry into Australia.

Georgie Allen and Sean Holroyd, of Geelong, said there was no extra information given to them about the virus from customs officers on Saturday morning.

While Holroyd said he felt many travellers flying to Australia were still “blasé” about foot and mouth disease, he and Allen had taken a cautious approach.

Melbourne woman Bella Curtis, returning home after 10 days in Bali, said she was “surprised” by the low-key biosecurity response on arrival in Australia. “It wasn’t crazy … there was just an announcement and we filled out a form,” she said. 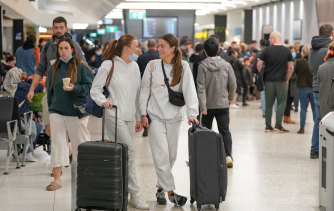 Bella Curtis (L) and Charlotte Powell arrived home from Bali on Saturday and were surprised at the lack of biosecurity measures in place.Credit:Scott Barbour

“Minister Murray Watt is working night and day to make sure we are doing everything we can to address this,” she said. “This includes putting sanitation mats into some international airports. It includes giving a million vaccines to Indonesia, and it includes working very closely with the National Farmers Federation and other groups that represent our agricultural sector.”

Nationals senator Bridget McKenzie, the Coalition’s spokeswoman for regional development, said the government was doing too little, too late.

“The government now has been flat-footed on this,” she told the Nine Network on Saturday. “We have known that this outbreak occurred just across the waters, in Indonesia, from May.“

Senator McKenzie said the option to close the border should remain on the government’s table. “We can’t emphasise enough that the kitchen sink needs to be thrown at this.”

Australian Border Force – which handles customs within Australian airports and assists biosecurity officers – declined to answer questions on Saturday about why biosecurity measures for foot and mouth disease were not yet in practice.

The Department of Agriculture said there had been escalating border biosecurity measures in Indonesia for livestock vessels returning to Australia.

“When, as expected, the disease reached Bali, our biosecurity measures were again enhanced (with on arrival announcements, provision of flyers and preparation of foot mats),” a spokesman said.

“The measures will continue to be reviewed in line with risk assessments.”

23/07/2022 World News Comments Off on Federal government insists foot and mouth controls on track, despite relaxed measures at airports
Lifestyle