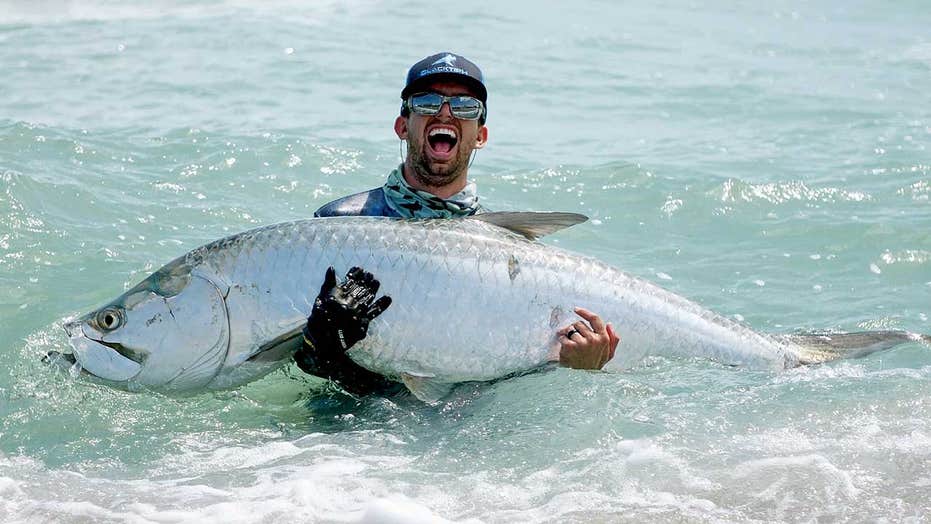 Joshua Jorgensen has hooked a lot of fish in his lifetime, but he ranks a 100-pound-plus tarpon among his proudest personal achievements.

Jorgensen, the creator of the online fishing series BlackTipH, tells Fox News he’s caught plenty of bigger tarpon, but never such a massive catch while fishing from the shore.

“I’d say it’s one of the biggest accomplishments for a Florida angler to catch a tarpon from the shore – it’s a very challenging fish to catch,” Jorgensen says. “Everyone was freaking out.”

It all started a few weeks back, when Jorgensen and cameraman Davis Bennett decided to head south in Palm Beach County, after finding that Hurricane Dorian had muddied the more northern waters to the point where they looked like “chocolate milk.” The mullet were running, Jorgensen said, and he knew bigger fish couldn’t be far behind.

“We just winged it, we went south,” he said, the two of them eventually stopping in Boca Raton.

As seen in a recent episode of BlackTipH Fishing, Jorgensen and Bennett also chose that day to try out a new tactic for dropping bait via drone — something they learned from an Australian fisherman who developed the process.

“It’s like sonar from the sky … a total game-changer,” Jorgensen said. 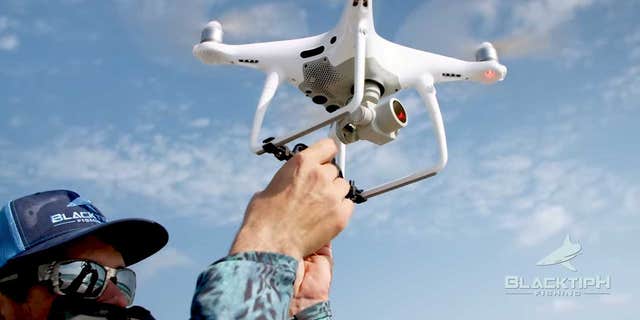 Jorgensen and his buddies dropped the baited line with the aid of a drone — a technique he learned from an Australian fisherman, and was trying out for the first time that day.
(BlackTipH/Joshua Jorgensen)

But even though it was a game-changer, it wasn’t an immediate one: Jorgensen said they were out there from 5 a.m. until noon before they had any real luck.

“Morale was pretty low,” he said, adding that he and Bennet, along with a new buddy Trevor they met that day, were thinking of throwing in the towel and finally grabbing lunch. But Jorgensen had a feeling, and sent out one last mullet to try to get a bite. It worked.

After what he describes as a “good fight” that went on for over a half-hour, he headed out into the surf to go grab his catch — but not without a bit of trepidation.

“You know the sharks eat those things,” he said. “It’s very nerve-wracking, going in the water and grabbing it — who knows what’s following behind.

But it was also a big deal to Jorgensen, who described the catch as a major accomplishment.

“From the shore… people dream of doing that,” he said. 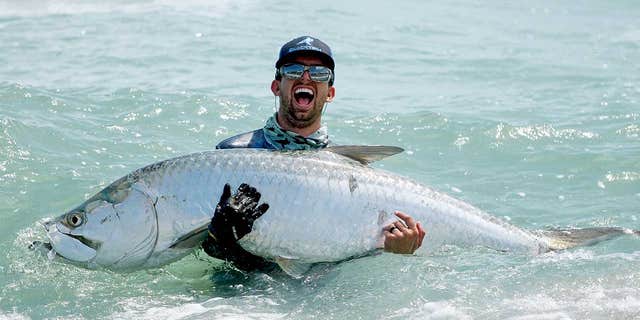 Jorgensen estimates the tarpon weighed between 110 and 120 pounds.
(BlackTipH/Joshua Jorgensen)

Jorgensen released the fish back into the ocean after making sure it was healthy, and estimates that it weighed between 110 and 120 pounds. He’s pretty sure that’s not a record, but it’s the biggest tarpon he’s ever seen taken from the shore, and he’s pretty proud.

“It’s so funny," he said, "I’m a big believer that if you work really hard, you give 100 percent effort, things are going to work out.

“The more time you put in, the harder you work, the more likely you are to catch a fish.”

03/10/2019 World News Comments Off on Florida fisherman catches enormous tarpon from shore with help from drone: 'People were freaking out'
Lifestyle