A former Nazi concentration camp guard accused of being an accessory to 5,230 murders testified Monday at his trial that he regrets serving in the role — and that “the images of misery and horror" have continued to haunt him.

Bruno Dey, a 93-year-old former SS private who worked in Stutthof, Germany, also apologized to the victims of the camp, saying that he had been posted there unwillingly after being deemed unfit for combat duty due to a heart ailment, according to the Associated Press.

"The images of misery and horror have haunted me my entire life," he was quoted by the German DPA news agency as saying. 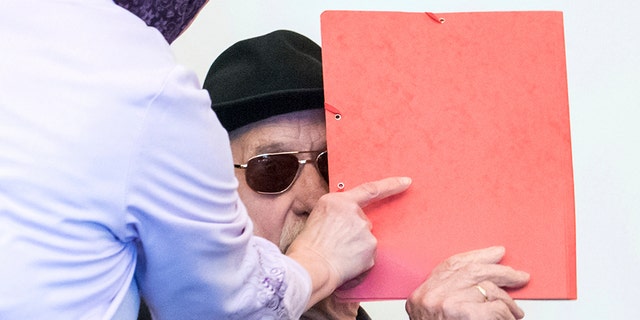 Bruno Dey, a 93-year-old former SS guard in the concentration camp Stutthof, arrives at the regional court in Hamburg, Germany, on Monday.
(AP/dpa)

The comments from Dey, which were in answer to questions from Judge Anne Meier-Goering, were his first at his trial in Hamburg, which started last week.

Though there is no evidence Dey was involved in a specific killing at the camp near Danzig, today the Polish city of Gdansk, prosecutors have argued that as a guard he helped the camp function.

Dey said he had frequently been assigned to watch over prisoner labor crews working outside Stutthof. He claimed he never fired his weapon and had once allowed a group to smuggle back to camp meat from a dead horse they’d discovered.

Despite his advanced age, Dey's being tried in juvenile court because he was 17 when he started serving at Stutthof.

He faces a six months to 10 years in prison if convicted. In Germany there are no consecutive sentences.

Fox News’ Thairy Lantigua and The Associated Press contributed to this report.