Eleven days after the cargo ship carrying 43 crew and almost 6000 cattle capsized in the East China Sea, the loved ones of crew are holding onto hope that they'll be found alive.

Tom Suttor is half expecting William Mainprize to turn up at his door or send him a text. The pair have been friends for eight years and it was Mr Suttor who introduced him to working as a stockperson, responsible for monitoring the welfare of animals. 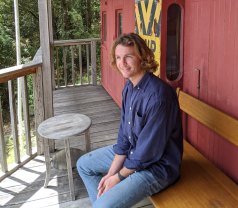 William Mainprize has been missing since September 2, when the ship he was on with 40 other crew capsized off off the Japanese coast.

Mr Mainprize's sense of adventure and love of animals has kept him working on cargo ships.

After completing a trip, Mr Mainprize, from Avalon on Sydney's northern beaches, would set off to explore: cycling around the Middle East or exploring Mongolia. He also worked as a wilderness guide in Tasmania and the Northern Territory, and had plans to get a master's degree in teaching.

Mr Suttor is hoping his friend is able to draw on his wilderness and survival knowledge to keep himself alive.

"Will has got so much survival experience … I am sure he is leading the survival efforts of the whole crew," Mr Suttor said. "If there was one person I’d want to be in a liferaft with, it would be Will."

Before the 140m Gulf Livestock 1 ship capsized in 200 km/h winds on September 2 off the coast of Japan, Mr Mainprize sent Mr Suttor a message saying the engine room was taking on water and the ship was parallel with the waves.

Mr Suttor thought the situation sounded serious but knew it wasn't the first time his friend had experienced rough seas. Throughout the following day, news broke that the ship had capsized and its crew were missing.

While search efforts have been hampered by weather, accounts that the crew boarded lifeboats before the ship capsized gives Mr Suttor, and others, "a sprinkle of hope" that their friend is alive.

"The most ideal outcome is that every other person is found and alive and safe. But as the days go on, it’s getting a bit grim," he said.

Queensland vet Lukas Orda is among the 40 crew missing. The total crew included 39 from the Philippines, two from New Zealand and the two Australians.

Mr Suttor and others have praised the efforts of the Japanese authorities but are calling for further assistance from federal or state governments and fellow Australians to support the search. The friends have started a change.org petition to garner support.

The Australian Veterinary Association, LiveCorp and the Australian Livestock Exporters’ Council have written to Deputy Prime Minister Michael McCormack urging him to ramp up search efforts.

"You will appreciate the families of missing crew members hold out hope there will be survivors, and time is now of the essence," the letter reads.

"We must leverage all available resources to help find our countrymen that are lost at sea."

In a joint statement on Friday, Mr McCormack and Minister for Foreign Affairs Marise Payne said Australia was engaging with Japanese authorities to assist in the search and rescue effort.

"Australia is encouraging Japan’s ongoing air and sea efforts, and continues to offer the Japanese authorities any supporting capability needed," the statement said.

"Japan’s Coast Guard has assured Australia it will not give up its search for those missing."

DFAT said it was unable to comment further than the joint statement.

Our weekly newsletter will deliver expert analysis of the race to the White House from our US correspondent Matthew Knott. Sign up for the Herald‘s newsletter here, The Age‘s here, Brisbane Times‘ here and WAtoday‘s here.