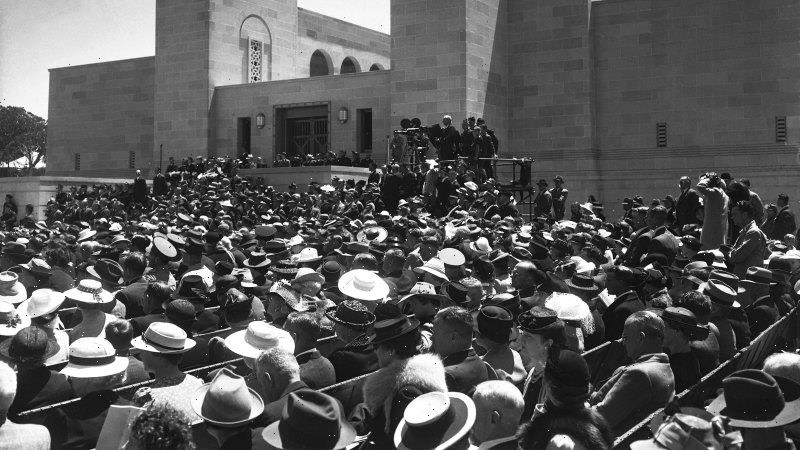 A SYMBOL OF SACRIFICE

CANBERRA, Tuesday. Four thousand people from all parts of the Commonwealth, who assembled to attend the opening of the Australian War Memorial, stood in silence at the approaches to the memorial at 11 o’clock this morning. Their thoughts were not only of the armistice 23 years ago, but also of the Australians who have fallen in the present war, and whom the memorial also commemorates. 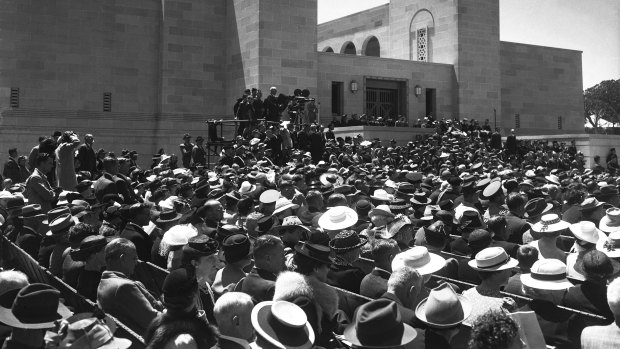 Opening of the Australian War Memorial in CanberraCredit:Harry Martin

A distinguished gathering attended the ceremony. Next to the Governor-General stood the Prime Minister, and on Mr. Curtin’s left was General Blamey, Commander of the A.I.F. Close at hand were representatives of the churches, members of the diplomatic corps, the Federal Ministry and the Returned Soldiers’ League.

In adjacent enclosures were Victoria Cross winners, members of Parliament, members of the R.S.L. and kindred associations from all parts of Australia. In the foreground were detachments of the three fighting services and of the women’s auxiliary services.

The memorial itself, built at a cost of £250,000 on the tree-clad slopes of Mount Ainslie, towered over the assemblage which, for the half hour before the silence, led by church leaders of various denominations, had sung hymns and heard prayers. At the conclusion of the two-minutes silence, the buglers sounded the Reveille, and the Governor-General, Lord Gowrie, declared the Memorial open.

His Excellency said that from the very moment the Great War started until the close of hostilities, Australia gave unsparingly and ungrudgingly the best and bravest of her young manhood, and the record of their heroic deeds, of their self-sacrifice and devotion to duty, furnished, without any doubt, one of the most inspiring and romantic chapters in the history of the British Empire. Many of those splendid men did not return. They gave their lives for their King and country, for the freedom of mankind, and to the everlasting glory of the land from which they came.

“It is in their honor that this Memorial has been erected – this Memorial so artistically fashioned, so magnificently carried out,” said Lord Gowrie. “We pay tribute today to those splendid young men, who gave their lives for their country, but we also pay a tribute to the silent heroism and the patriotic spirit of those who were bereaved.” 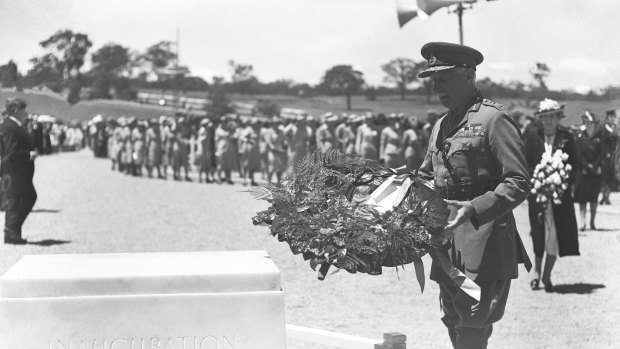 Lord Gowrie said that when it was decided to erect the Australian Memorial, it was hoped that the story it unfolded would not only be a record of the heroic deeds of those who fought and fell in the last war, but it would also be a reminder for future generations of the brutality and the utter futility of modern war, and that if civilisation was to be saved we must devise some better, some less savage, some less inhuman method of settling our international disputes than by international slaughter.

“But alas, these hopes have not been fulfilled,” his Excellency went on. “The cease fire that sounded this day 23 years ago was not the final dismiss, but only a temporary truce. One lesson was not enough, a second and sterner lesson was required, and we are now engaged in the most deadly contest that the world has ever known.

“Human life, money and material are being poured out like water, and every instrument that human ingenuity can devise, that human skill can construct, is being utilised for the slaughter of our fellow men. Whole populations are being exposed to methods of destruction hitherto unheard of, and which once launched are well nigh impossible to control.

“We are fighting for our very existence and for all the things that make life worthwhile. When we read the names inscribed on the walls of this monument – when we read the daily casualty lists, let us ask ourselves, ‘What can we do for those who did so much; what can we give to those who gave us all ?’ Our answer will be that we are determined that those heroes shall not have died in vain – that we are prepared to make any sacrifice to put an end once and for all, to this diabolical menace to mankind, and ensure the peace of the world for generations to come.”

The Prime Minister made a brief but impressive speech. The Memorial, he said, would house relics of the past and the present war, and would keep alive the unquenchable spirit of sacrifice and service, which was the cornerstone of the people’s greatness. It recorded the first great crisis in Australian history; it contained accounts of innumerable acts of heroism, and it was a sanctuary of Australian traditions.

It was extremely appropriate that such a place was within sight of the building which was the seat of ordered Government. The Parliament of a free people sat there day by day, and must be inspired and strengthened in the performance of its duty by the ever present opportunity of contemplating the story that had gone before – the deeds which had helped to make the nation and the unifying purpose which linked the ordered ways of a free people with the matchless courage that inspired its sons to maintain it.

“The symbolism of this structure is associated with the basic ways of life of the people of Australia and of the whole British race,” added the Prime Minister. “The memorial will perpetuate the memories of brave men. It is built upon land which is the property of every man and woman in Australia, and not the property of any particular State. It is the tribute a grateful nation paid to those who served it so steadfastly.”

At the conclusion of the ceremony wreaths were placed on the Rock of Commemoration by the Governor- General, Prime Minister, diplomatic representatives and citizens.

10/11/2022 World News Comments Off on From the Archives, 1941: Australian War Memorial opens in Canberra
Lifestyle