Wider war is the big fear

LONDON, June 5. — Israel and Egypt are at war. The sudden explosion of confrontation into armed conflict has dramatically demonstrated that calls for restraint by the great powers could no longer contain the inflammatory feelings and hatreds which have been building up in the past fortnight. 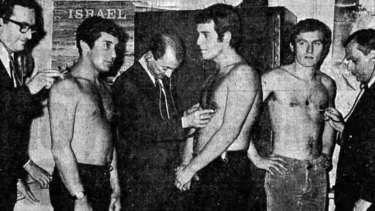 It is not yet clear who or what began the outbreak of hostilities.

This morning each side was blaming the other.

The question fades into insignificance against the far more ominous one of whether this is a clash that can be limited and localised or whether it is the beginning of a larger, more dangerous conflagration.

Is this, for the freshly united Arab world, the long-awaited holy war against the alien State of Israel?

Is this, for Israel, the final fight for national survival in an environment of un-relenting hostility? 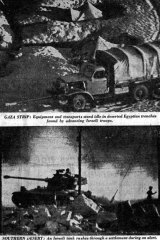 Or will the conflict escalate into a confrontation between the great Powers that could rival or exceed Berlin, Cuba and Vietnam in menacing brinkmanship?

At the moment of writing, neither Britain nor America has indicated what action it will now take to part the belligerents and to support their seemingly reluctant declarations.

The trouble is that Vietnam had made it extremely difficult for Russia and America to co-operate in any other crisis.

Certainly the great Powers and their maritime partners should not be astonished that events moved so quickly over the weekend. It had been obvious for some days that Israel had become impatient with expressions of good intentions for the West, backed by no more than equivocal declarations of military support.

The return of General Moshe Dayan as Israeli Defence Minister marked the return of the Hawks to power in Tel Aviv, buoyed by powerful pressures within Israel to strike before it was too late.

Reaction in Canberra to the outbreak of fighting was highly cautious.

The acting Prime Minister (Mr. McEwen) said he had no comment at this stage. 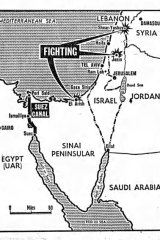 "When official information comes in I will be watching the position very carefully," he said.

"As I indicated on Friday, if it is thought necessary I will call Cabinet back again."

It is thought unlikely Cabinet will meet before the Minister for External Affairs (Mr. Hasluck) returns from New Zealand tomorrow.

Mr. McEwen is keeping in close touch with the Prime Minister (Mr. Holt) who is In Canada.

The Department of External Affairs is receiving information from its posts in the Middle East.

A spokesman said last night relevant departments were being kept informed of developments. He said embassy staff had not yet been told to leave their posts.

The Israel embassy in Canberra was manned throughout last night to receive messages from Tel Aviv.

The second secretary (Mr. Haggai Eylon) said the embassy had received a message from Israel that the first Egyptian attack was made at 4 p.m. EST.

Neither the United Arab Republic ambassador (Mr. Abdel-Hamid) nor any of his staff could be contacted last night.

The Acting Minister for Defence (Mr. Bury) made a hurried return to Canberra early this morning in a RAAF aircraft. He cut short a visit to Northern Queensland to return for departmental discussions and to be ready for any Cabinet meeting.

He was due to return on Thursday.

The Minister for Defence (Mr. Fairhall) is overseas. Defence department sources said no plans had been made to arrange his immediate return to Canberra and he was not expected back until the end of the month.

Related posts:
04/06/2019 World News Comments Off on From the Archives, 1967: War erupts in the Middle East
Lifestyle