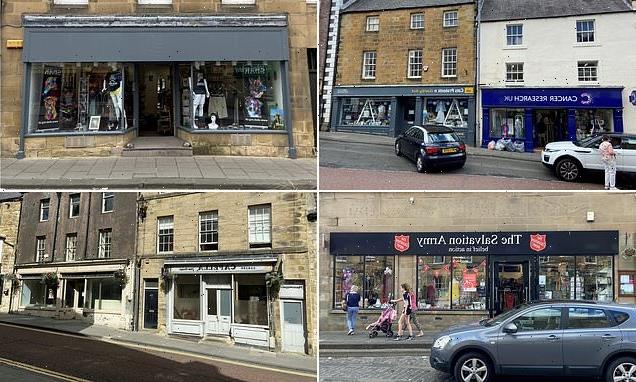 Residents living in an historic market town have slammed an influx of second-hand stores amid claims it is becoming a ‘charity shop capital’.

Is YOUR town overrun with charity shops?

A total of nine charity and second-hand shops are trading in the Northumberland town of Alnwick – including two Cancer Research outlets just yards apart.

The ancient cobbled street of Bondgate Within is home to shops run by the Salvation Army, RSPCA and local charity Lions Books.

Cancer Research boasts two shops, one next to a branch of Cats Protection and the other 50 yards away, competing with Oxfam.

On the same road, and in the shadow of the world famous Alnwick Castle, are shops run by dog charity Shak, Cats Protection, Mind and Oxfam.

And the rush of charity shops is still ongoing – a new shop in aid of Hospice Care has recently opened for three days a week just yards from the castle gates.

The Duke of Northumberland Ralph Percy, 62, and his wife Duchess Jane, 60, live in Alnwick castle which starred as Hogwarts in Harry Potter, and also featured in TV’s Downton Abbey and Blackadder.

But the Duke, who is close friends with Prince Charles and is worth an estimated £315 million, has been accused of not doing enough to promote businesses in the town – instead drawing it away. 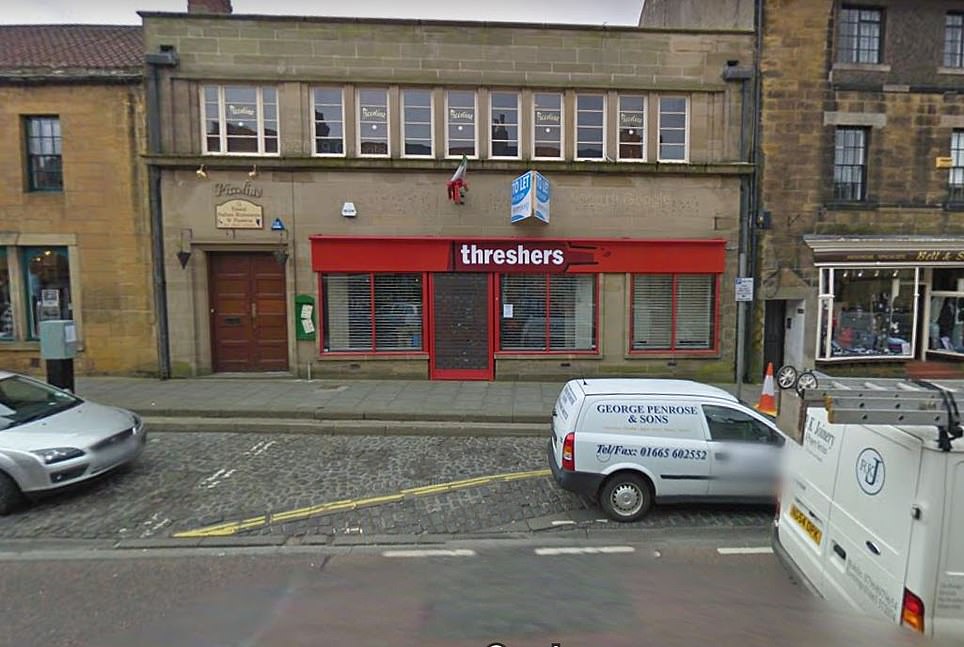 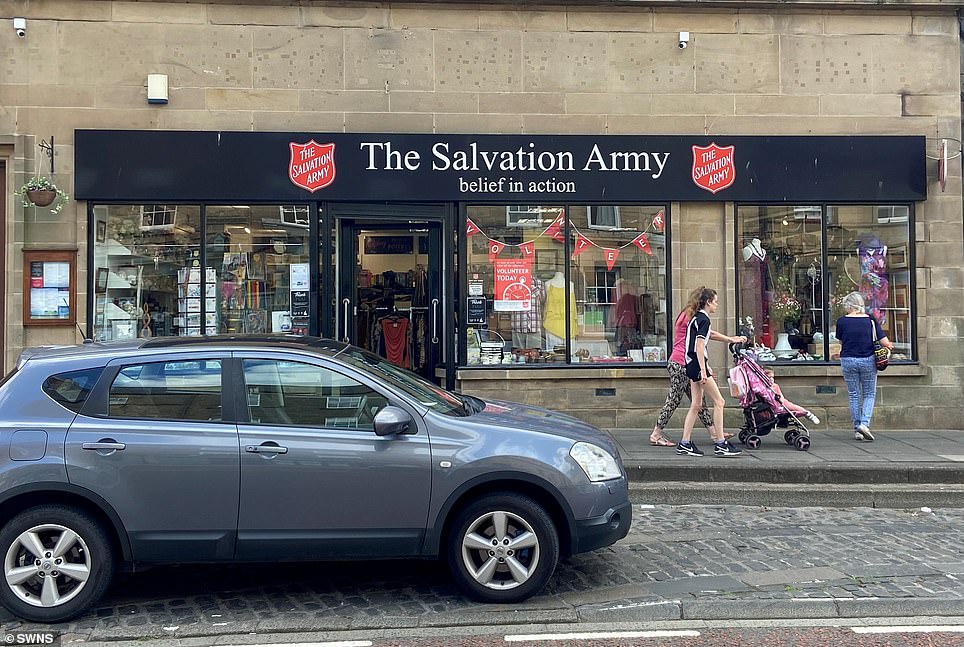 The town used to have a Threshers alcohol store, but the site has since been a charity shop branch of the Salvation Army 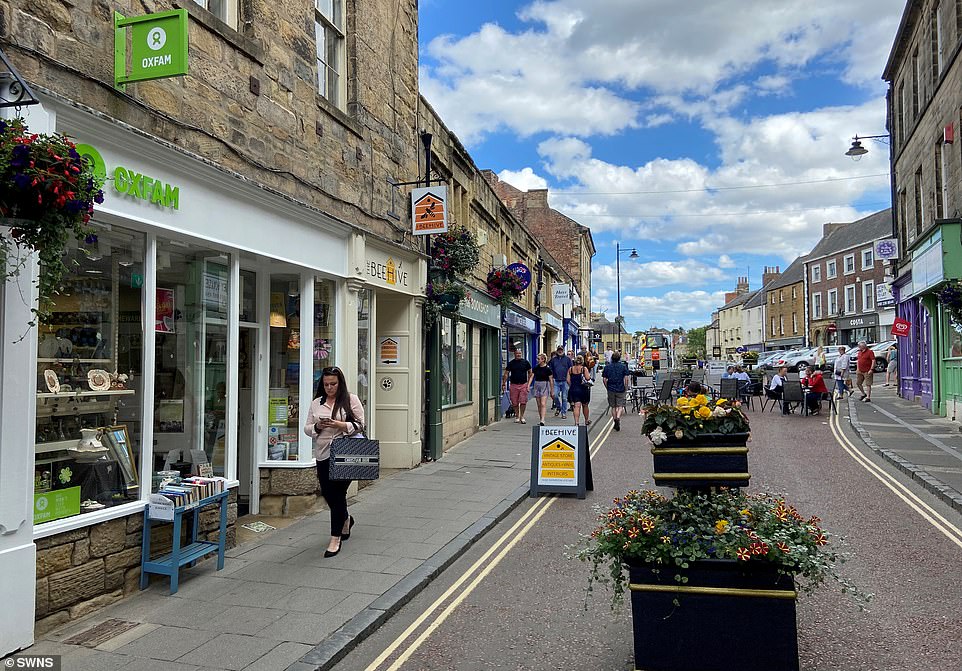 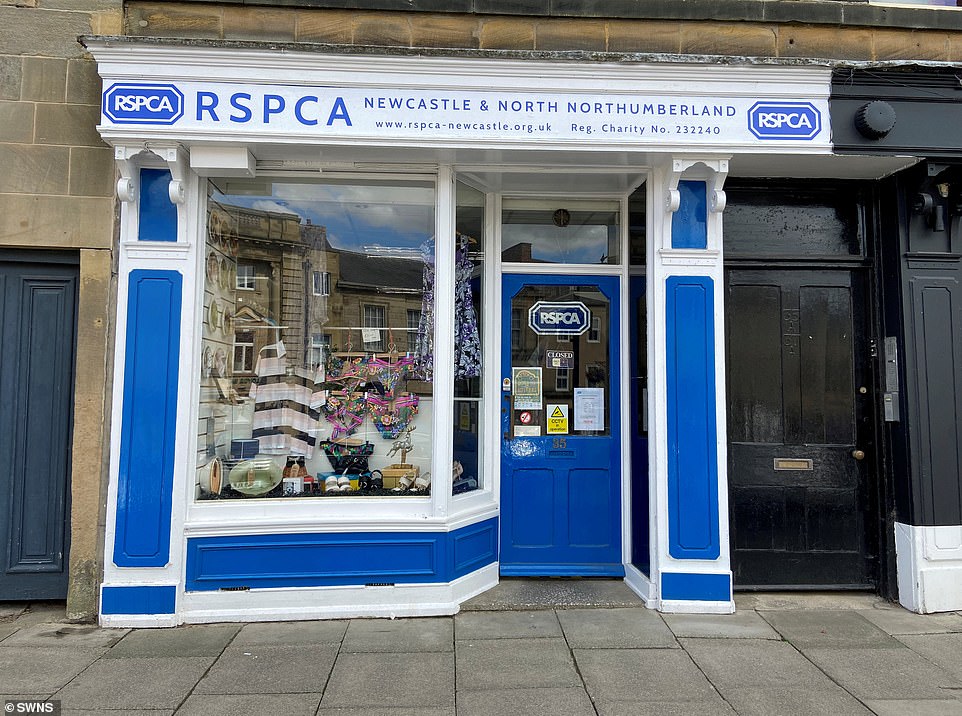 Charity shops such as the RSPCA are some of the only high street stores to have survived, after the Willowburn Retail Park is said to draw visitors away from the town 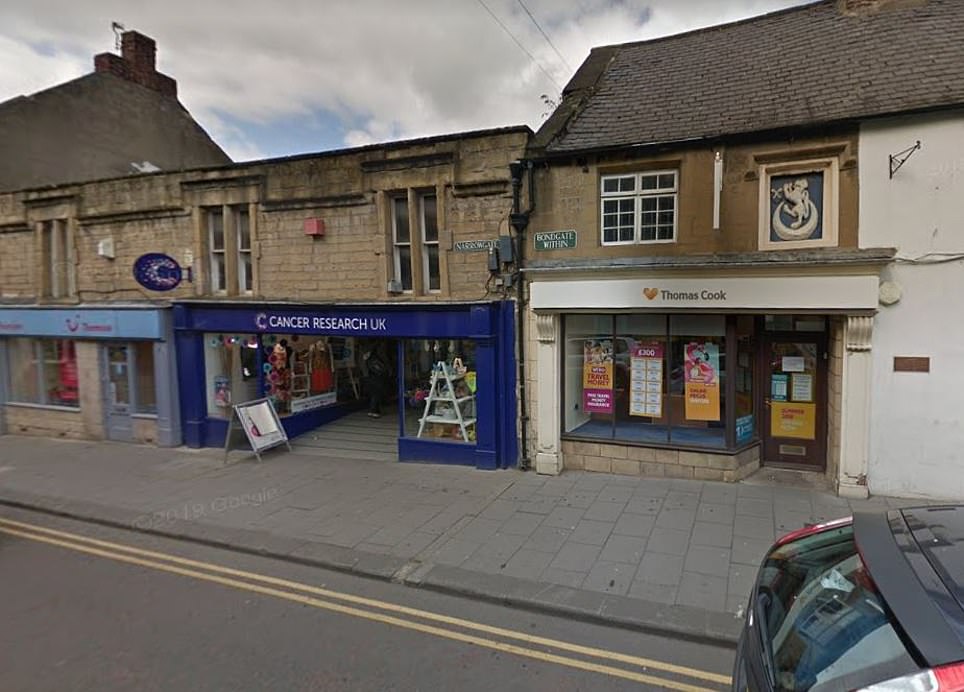 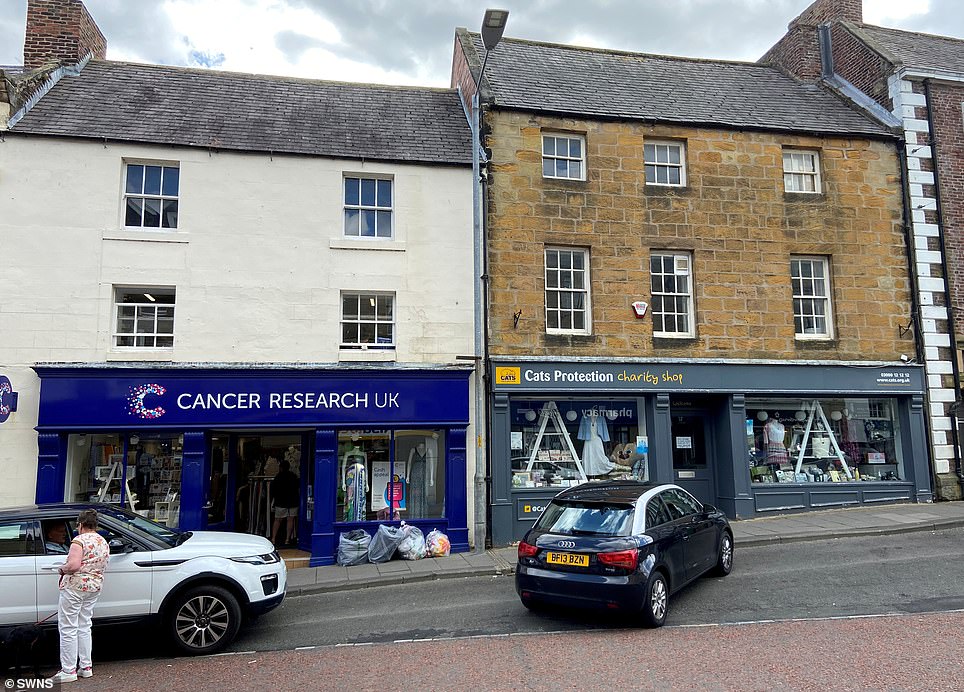 Residents describe the town centre as a ‘ghost town’ and the ‘capital of charity shops’, with nine different stores in the town’s tiny centre 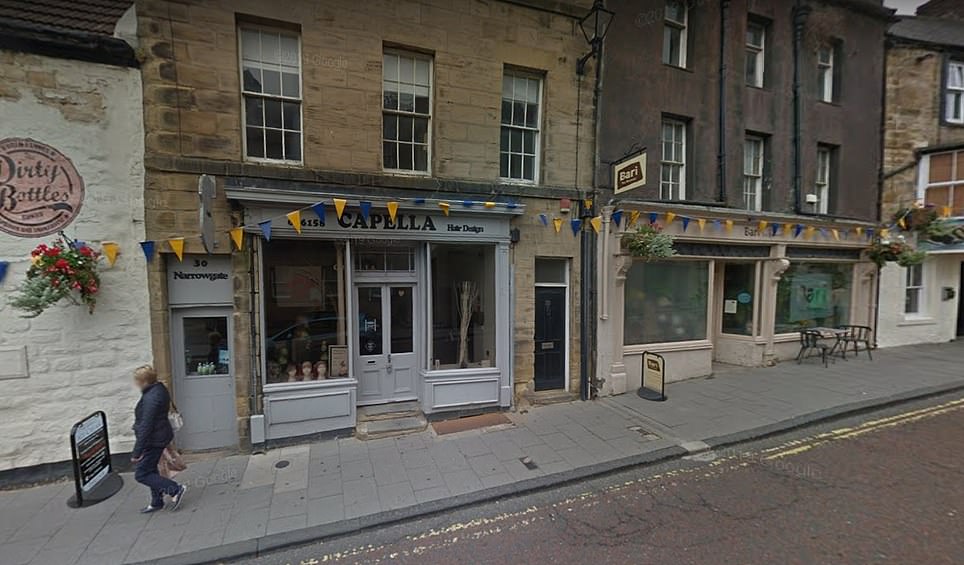 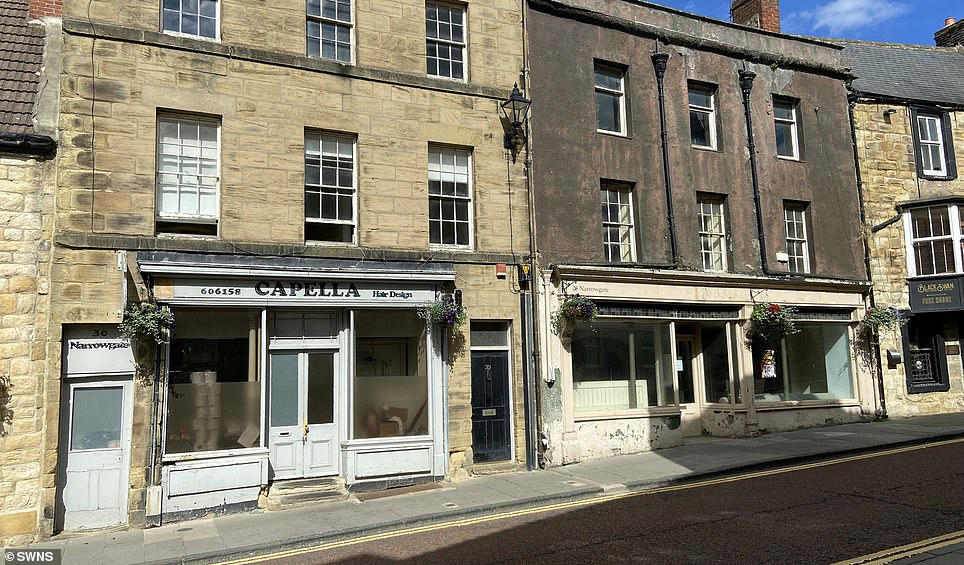 Streets that were once full of thriving shops now feature empty premises and boarded-up restaurants, while charity shops continue to open

The castle’s own website states that the current Duke and Duchess have taken significant steps to turn the site into a tourist attraction: ‘As well as managing the more traditional estate businesses of agriculture, forestry and minerals, the Duke has overseen expansion of the portfolio to include planning and development and commercial property.

‘With his Duchess, Jane, they have developed Alnwick Castle as a significant visitor attraction while the Duchess has masterminded a garden renaissance in the creation of The Alnwick Garden.’

One business owner, who did not want to be identified, said: ‘Alnwick should be like a mini York but instead it’s like a ghost town.

‘We’ve got a world famous castle and grounds literally on our doorsteps but visitors take one look around the town and get in their cars and leave.

‘There was a time when Alnwick was full of little businesses and cafes but now we’ve become the charity shop capital of the North East.

‘I do think the Duke should be doing much more to promote the town and attract businesses to trade here.’

Resident Janet Bennett, 50, said: ‘There is a view here that visitors come to the castle and the shops and restaurants nearby don’t benefit.

‘Alnwick Castle is almost like a little retail park in its own right, its got restaurants, shops and food stalls so visitors needn’t go into the town at all. 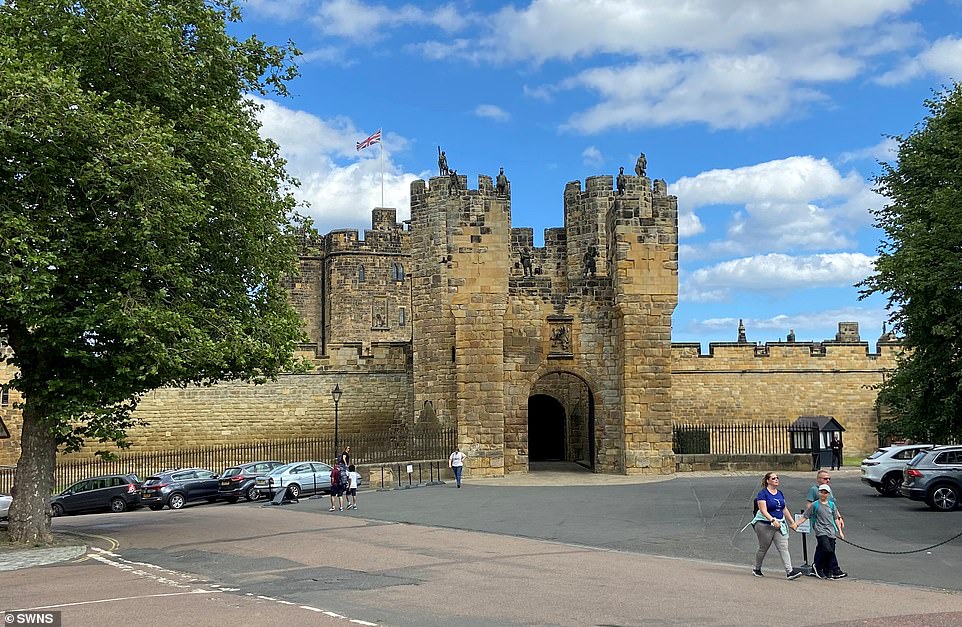 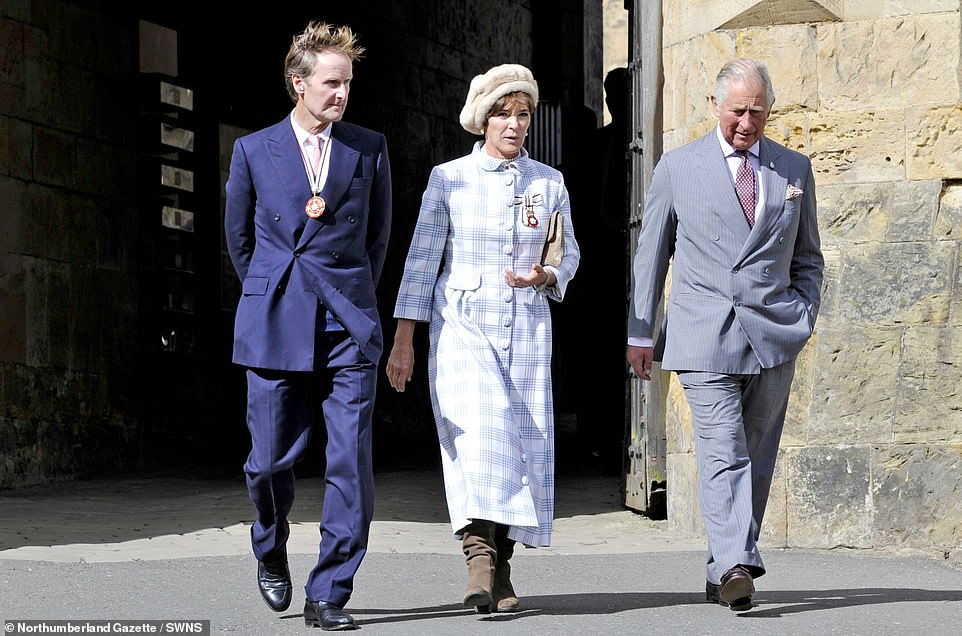 Ralph Percy (left) and wife Jane, the Duke and Duchess of Northumberland, are long-standing friends of Prince Charles 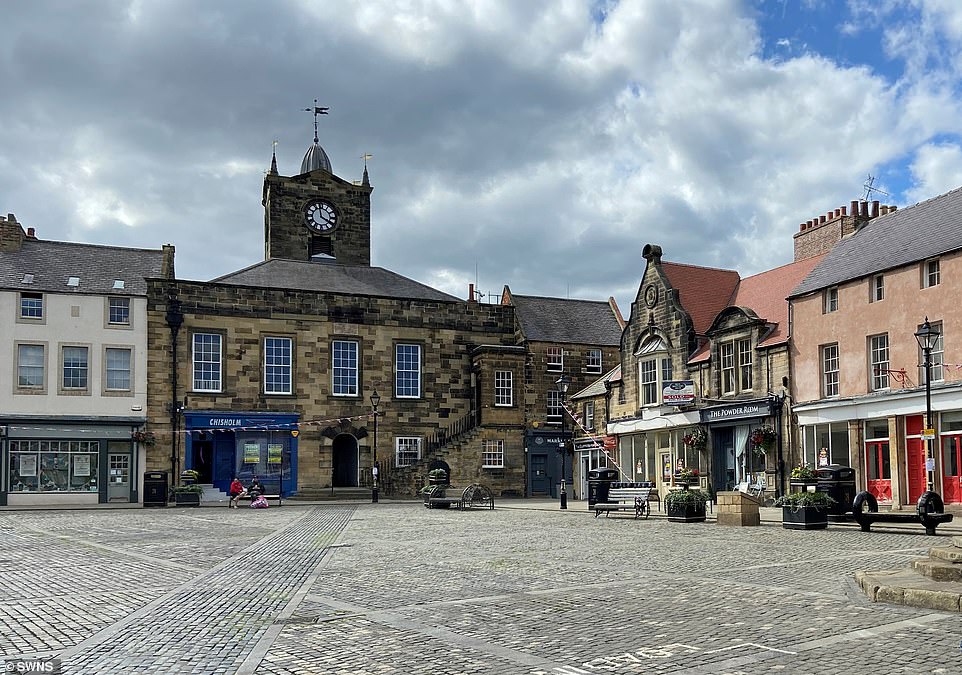 The historic town dates back around 1,000 years, but despite its local charm visitors favour the Duke of Northumberland’s castle instead 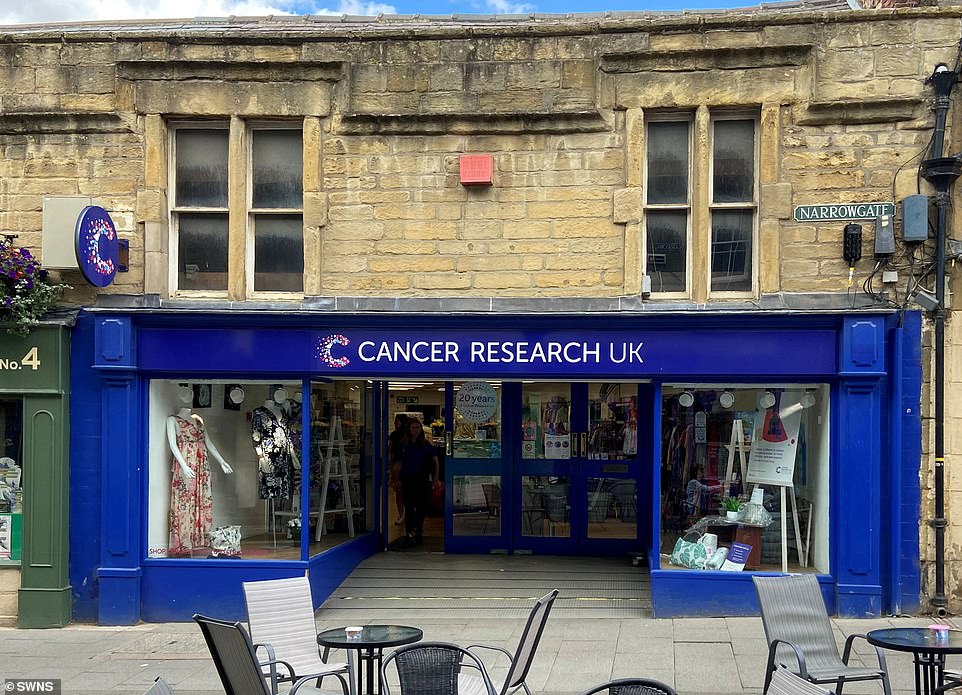 Alnwick has two different Cancer Research UK stores within yards of one another – a fact resident Janet Bennett is up in arms about: ‘Just how many Cancer Research shops does one town need?

‘A friend recently visited me from London and she said that if you’re into bargain hunting and second-hand clothes then Alnwick is the place to be.

‘I think it’s a real shame to see so many boarded up shops while these charity shops take over. Just how many Cancer Research shops does one town need? We’ve got two for goodness sake.’

Elsewhere in the town, which has a population of 8,000 and dates back almost 1,000 years, once thriving shops, cafes and restaurants lie derelict.

Half-a-mile from the town square, the Ford garage lies empty after it closed earlier this year while engineering firm Hardy Advances Composites, which employed 50 people, is for sale.

The new Willowburn Retail Park, which is owned by the Duke’s Northumberland Estates, is also blamed for drawing businesses and visitors away from the historic town centre.

It already hosts a large M&S Foodhall and Turnbull’s butchers have opened a shop and deli on the retail park and a large B&M store is set to open next year.

Last year Alnwick was named among several other towns in Northumberland to benefit from a share of a £3 million regeneration fund.

Northumberland County Councillor John Benyon said at the time: ‘On Alnwick, yes, they have the castle and the gardens.

‘But the town centre is suffering because of the out-of-town shopping.Also, as the gardens and the castle aren’t in the centre, they draw people away from the centre.’