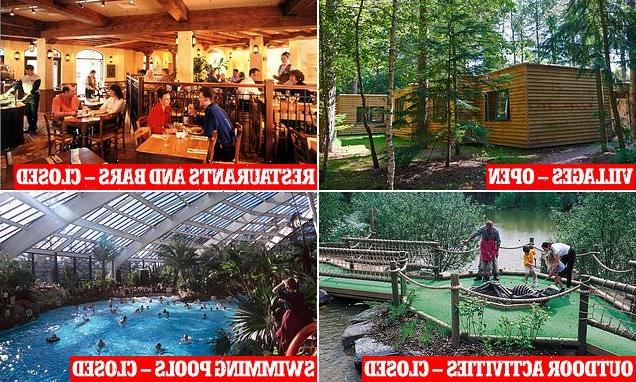 Center Parcs faced further backlash today after it revealed their facilities would be closed for guests staying at their resorts while also warning new arrivals not to arrive on the day of the Queen’s state funeral.

The holiday chain had been inundated with complaints after it said its five sites would close from 10am on Monday September 19 ‘as a mark of respect’, leaving guests scrambling as they struggled to find alternative accommodation.

The company was earlier forced into an embarrassing U-turn after being contacted by thousands of furious families whose holiday plans were left in tatters by Center Parc’s plan to turf them out.

Parks will be now remain open for those who planned to stay there on Monday, though the villages will still be closed and there will be limited activities as the Queen’s funeral goes ahead. Swimming pools, sports activities, restaurants are all expected to be shut on Monday.

And although guests who arrive before the state funeral will now be allowed to stay on the resort, Center Parcs has advised those hoping to arrive on Monday that they should not travel and said it will be offering discounts.

Have your holiday plans been scuppered?

Penny Smith, an NHS nurse from Dover, Kent, had been due to start her break in the expansive Elveden resort with her husband and daughter’s family on Monday, but were told by Center Parcs they should not travel until Tuesday.

She told MailOnline: ‘We only have a five day holiday booked and it’s the only holiday we will be having this year due to recent financial hardships.

‘I am a nurse with the NHS and we are still expected to work at times like these, it’s just unlucky if you’re rostered to work on that day, so why does Center Parcs not do the same?

‘Our grandchildren are so upset about the fact that they only have four days there now, and in fact, we are all very upset and appalled that they can do this to people who pay a lot of money to this company and yet get treated like this. I am very upset about the Queen’s death, but do think that this is very unnecessary.’

Other holidaymakers took to social media to blast the decision to ‘penalise’ customers. One person writing on Twitter said: ‘So you’re allowing people to stay but won’t accept new arrivals Monday? Still pretty poor because now you’re only penalising one set of customer rather than all customers.’

In an updated statement, a spokesman for the holiday village chain told MailOnline: ‘Like many businesses we have taken the decision to close all our UK villages on Monday 19th September.

‘This decision was taken as a mark of respect and to allow as many of our colleagues as possible to be part of this historic moment.

‘We have contacted all the guests due to arrive on Monday 19th September and offered them a number of different options. Our villages will be open to welcome guests on Tuesday 20th September.’

‘The vast majority of our guests are either due to arrive or depart on Monday 19th September. We have however, reviewed our position regarding the very small number of guests who are not due to depart on Monday and we will be allowing them to stay on our villages rather than having to leave and return on Tuesday.

‘The villages will still remain closed on Monday and we will be offering a discount for the lack of facilities available on that day.’ 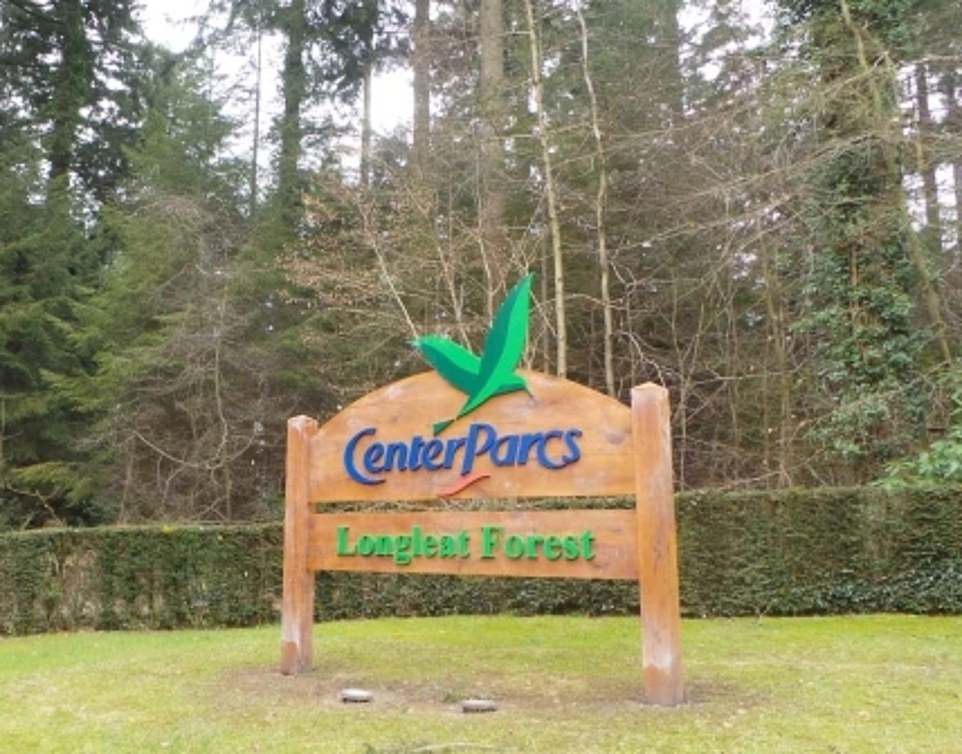 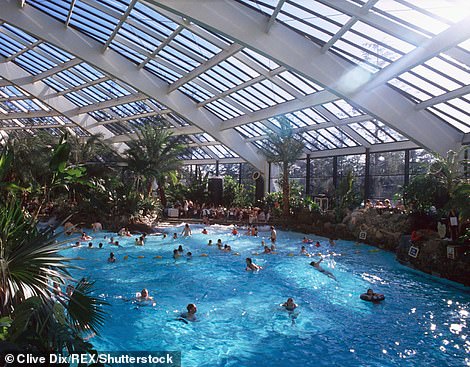 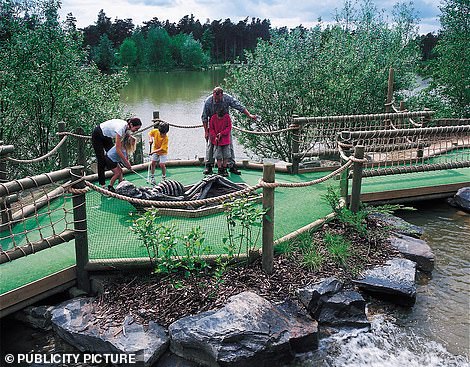 Popular activities at Center Parcs, including the large swimming pools (left) and outdoor events such as crazy golf or climbing ranges are understood to be shutting on Monday as a ‘mark of respect’ to the late Queen Elizabeth II 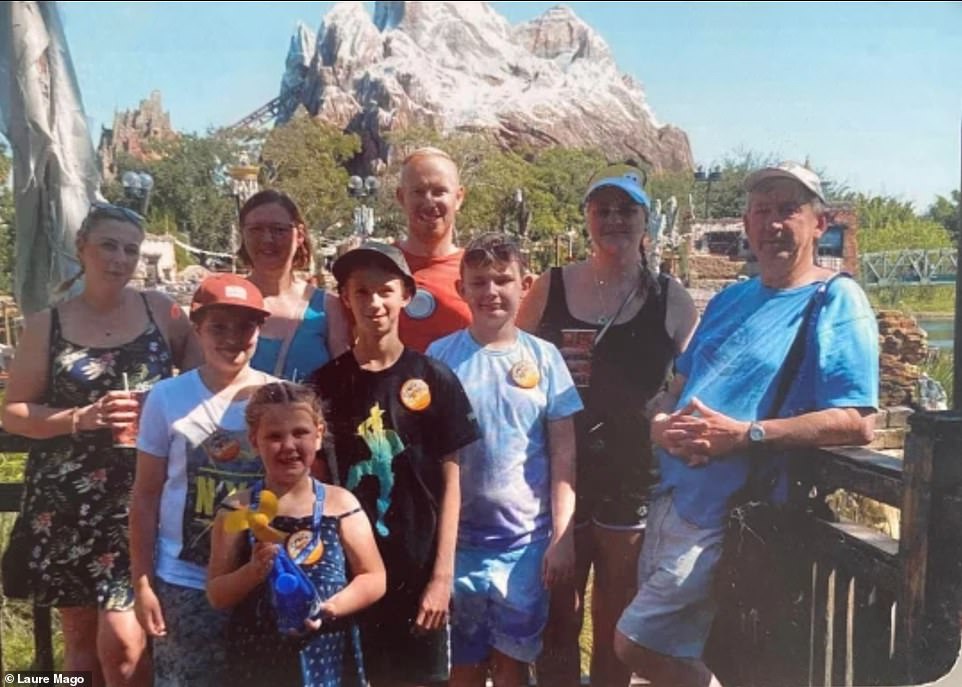 Laura Magor, 33, (second from right) plans to celebrate her birthday along with her mother and sister on September 19 in Longleat Forest in Wiltshire after a 70-mile trip from South Wales 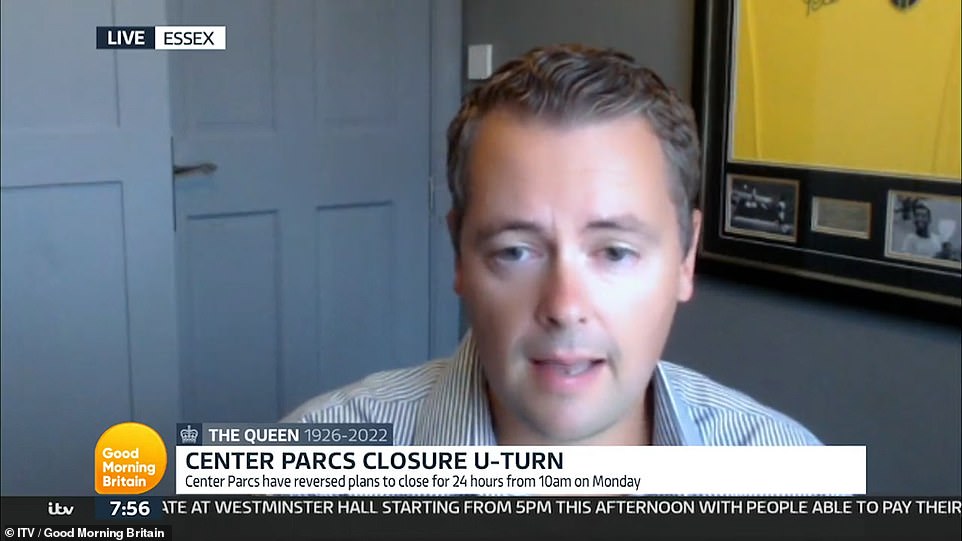 Jamie Nice, (pictured) who had booked a last-minute trip to visit Center Parcs with his family and his terminally ill mother-in-law said he felt the decision to boot customers out was ‘ridiculous’ 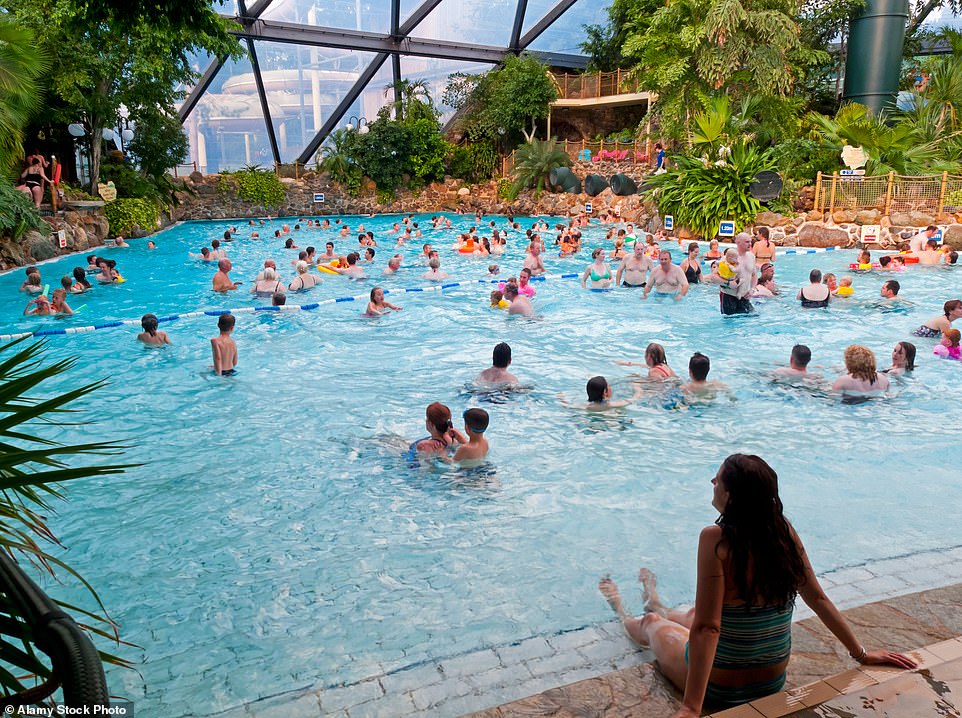 Center Parcs said its parks would still be closed on Monday September 19, but guests would no longer be made to leave. Pictured: Guests swimming in the large domed pool at Center Parcs Sherwood Forest

Jamie Nice, who had booked a last-minute trip to visit Center Parcs with his family and his terminally ill mother-in-law said he felt their earlier decision to boot customers out was ‘ridiculous’.

He told Good Morning Britain: ‘My mother-in-law is terminally ill and we booked this trip at short notice so she could enjoy that… We’re just trying to enjoy holidays with [her] while we can.

‘These aren’t cheap holidays, so to have that much cut off of the holiday isn’t great.’ Mr Nice later clarified that Center Parcs had offered him a 15% discount on his booking as a gesture of goodwill.

Another holidaymaker, Denzil Demarara, added: ‘I have paid for a week and I have a written contract stating my arrival date and my departing date, I will not be leaving early. They will have to drag me and my children out.’

Amid the fury, social media users were also quick to poke fun at the holiday chain’s puzzling decision, sharing their best memes and mocking jokes at the situation.

Many of those affected expressed their anger on Center Parcs’ Facebook page before the U-turn was announced.

One wrote: ‘We were five related families getting together for our annual family holiday – with two small children and two dogs, three hours from home!

‘Where the hell are we supposed to go for one night?! It’s that or cancel some or all of the much-anticipated holiday!

‘Sorry, but this is an awful, awful decision that has left us devastated. By all means close the restaurants and activities, but let us stay on the park!!’

Another wrote: ‘Center Parcs have left us in a right mess. Party of six – including one toddler and one adult with special needs. Driving four hours for a Friday to Friday break in [a] four-bedroomed cabin.

‘Get kicked out of our accommodation at 10am Monday and can’t return until the same time on Tuesday. What the hell are we supposed to do???!!!’

One holidaymaker tweeted: ‘We are just starting a two week break, but now are expected to go all the way home on Monday, then come back the next day.’

Another tweeted Center Parcs saying: ‘It would appear respect only flows one way, and that respect for your guests is not something that is a priority. An appalling decision, made worse by the lack of any kind of recompense for those who are now unable to use facilties that they have paid for on Monday. Unacceptable.’ 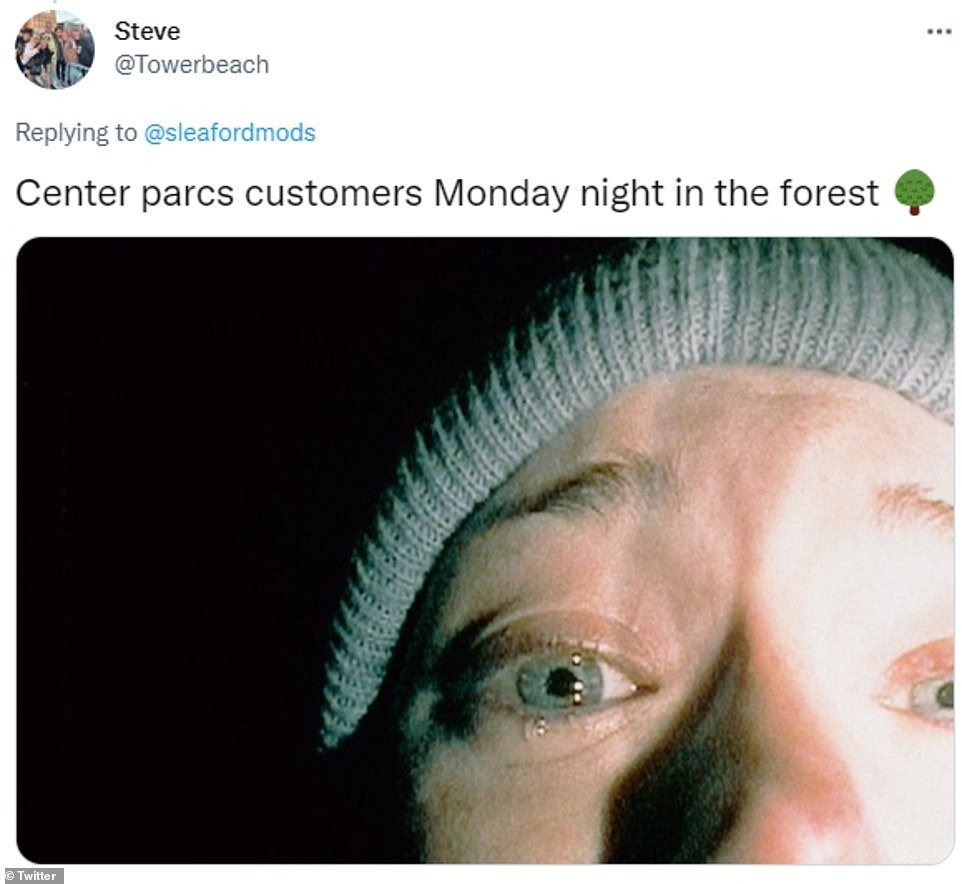 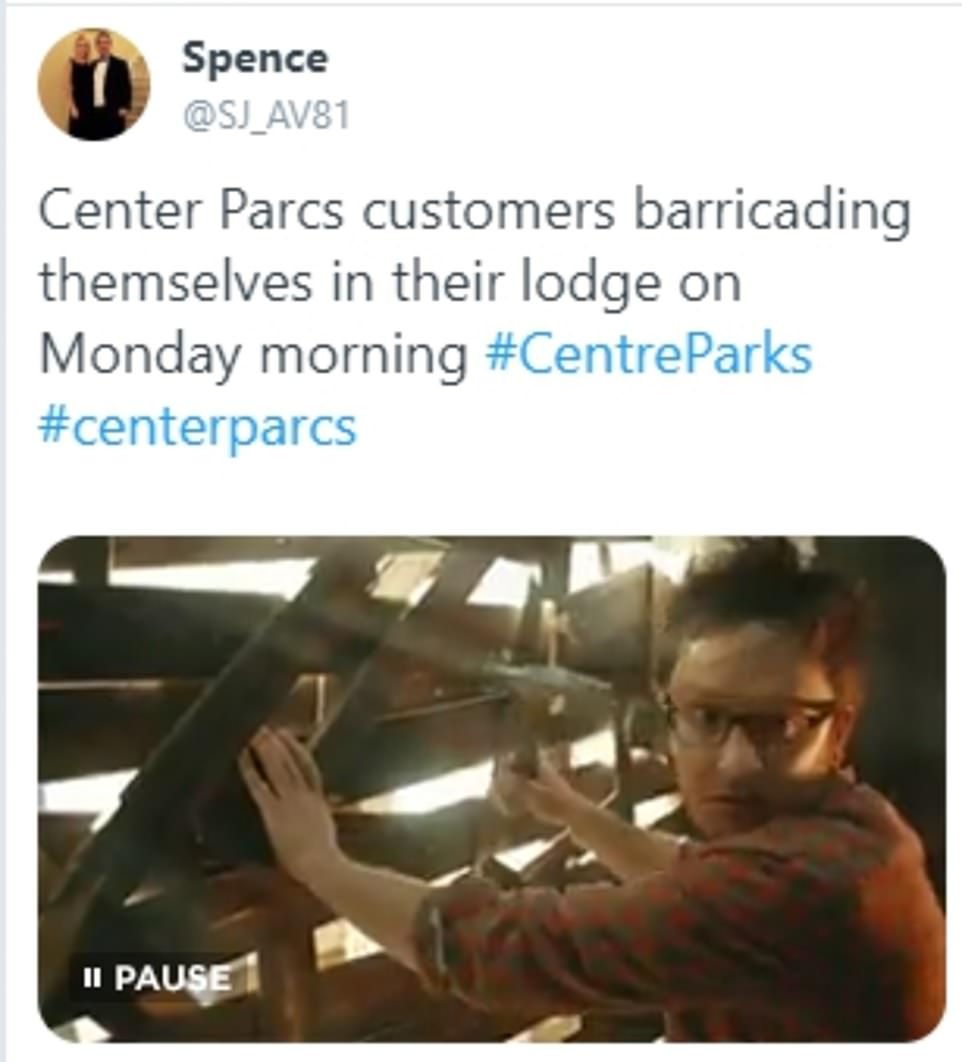 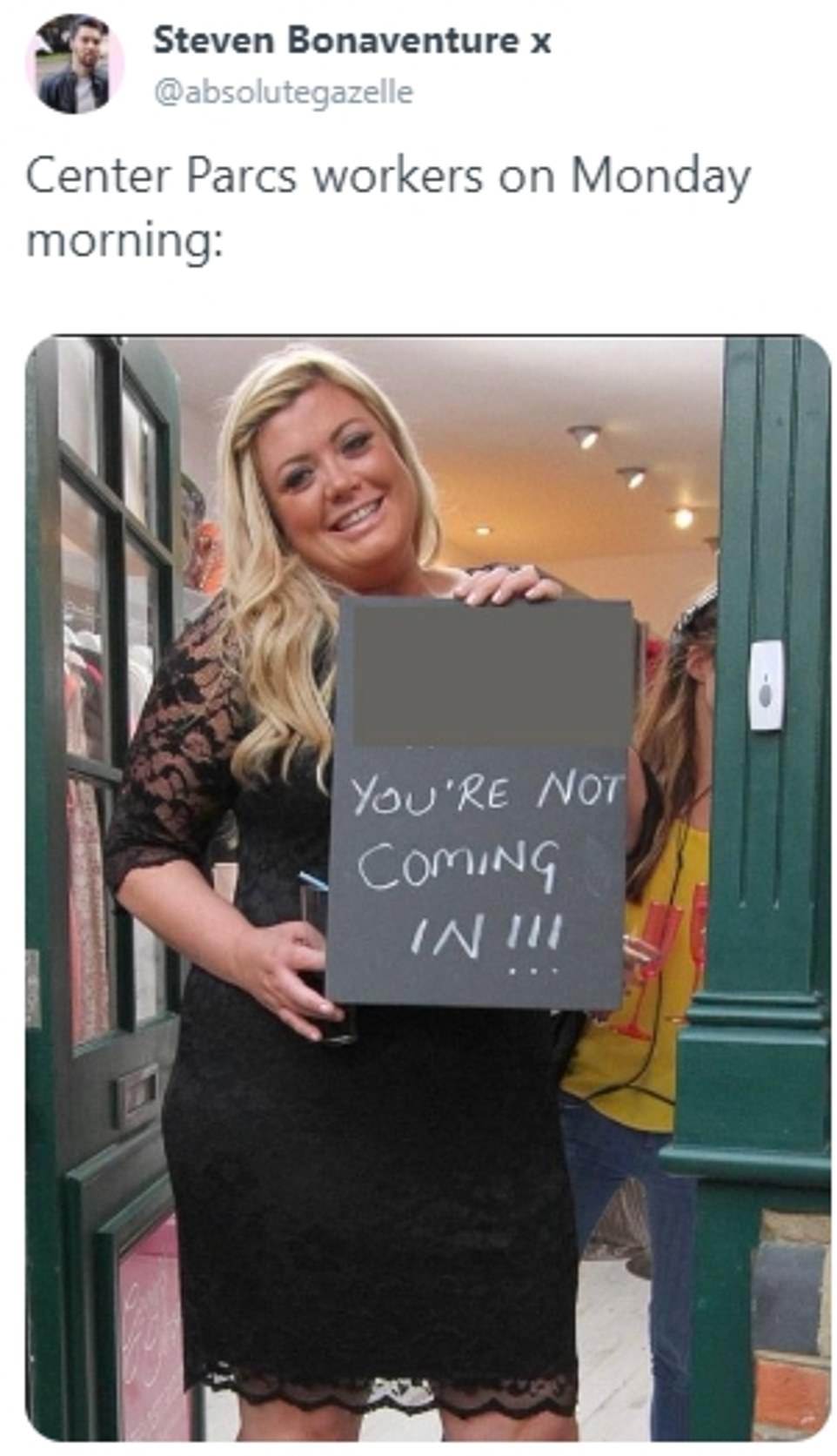 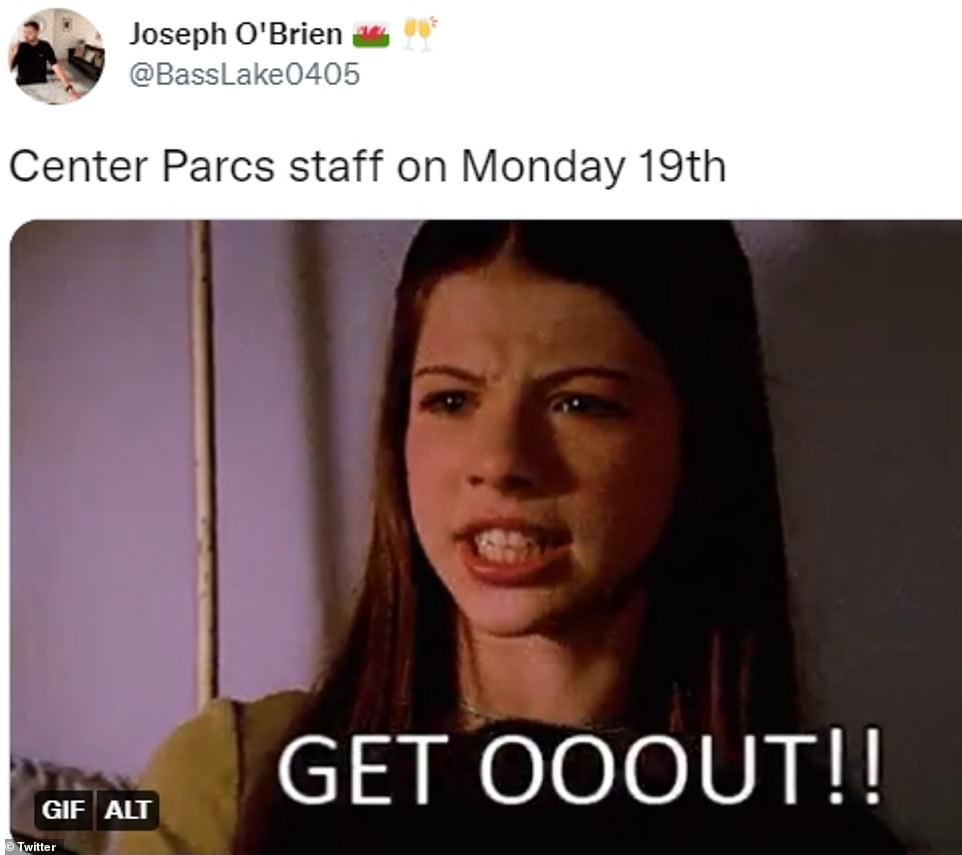 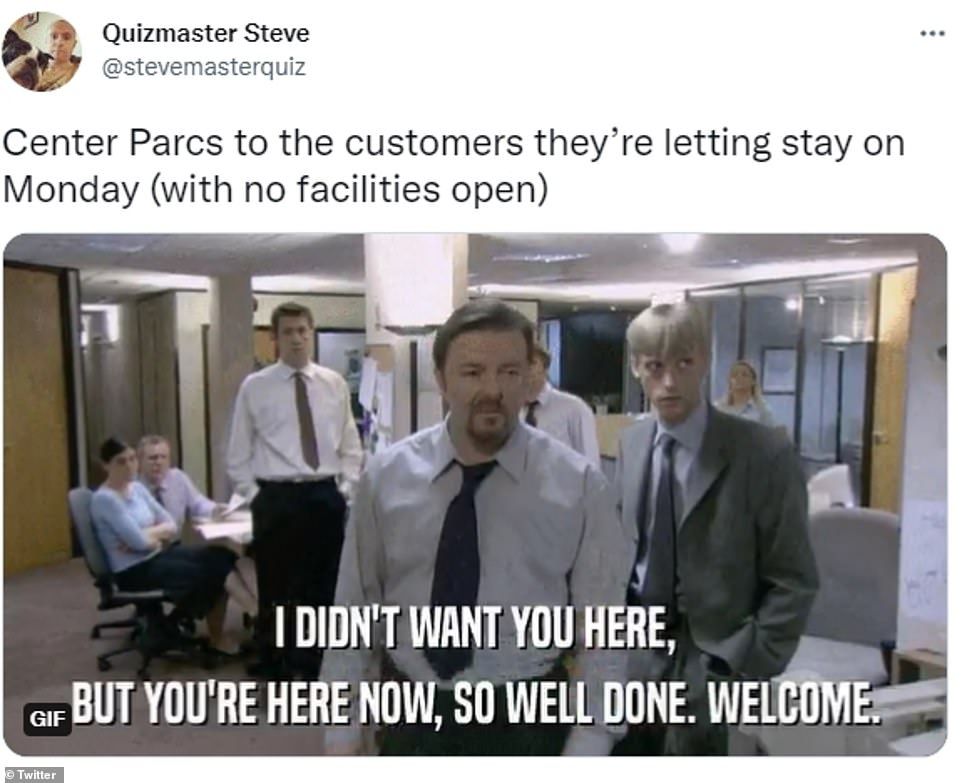 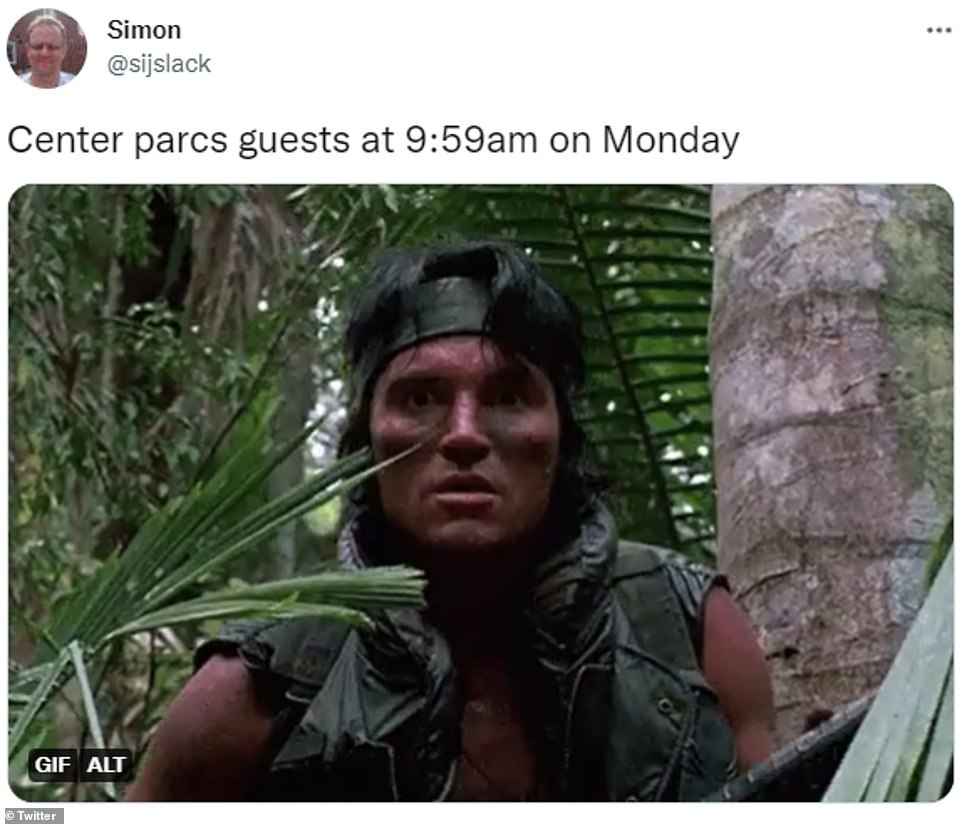 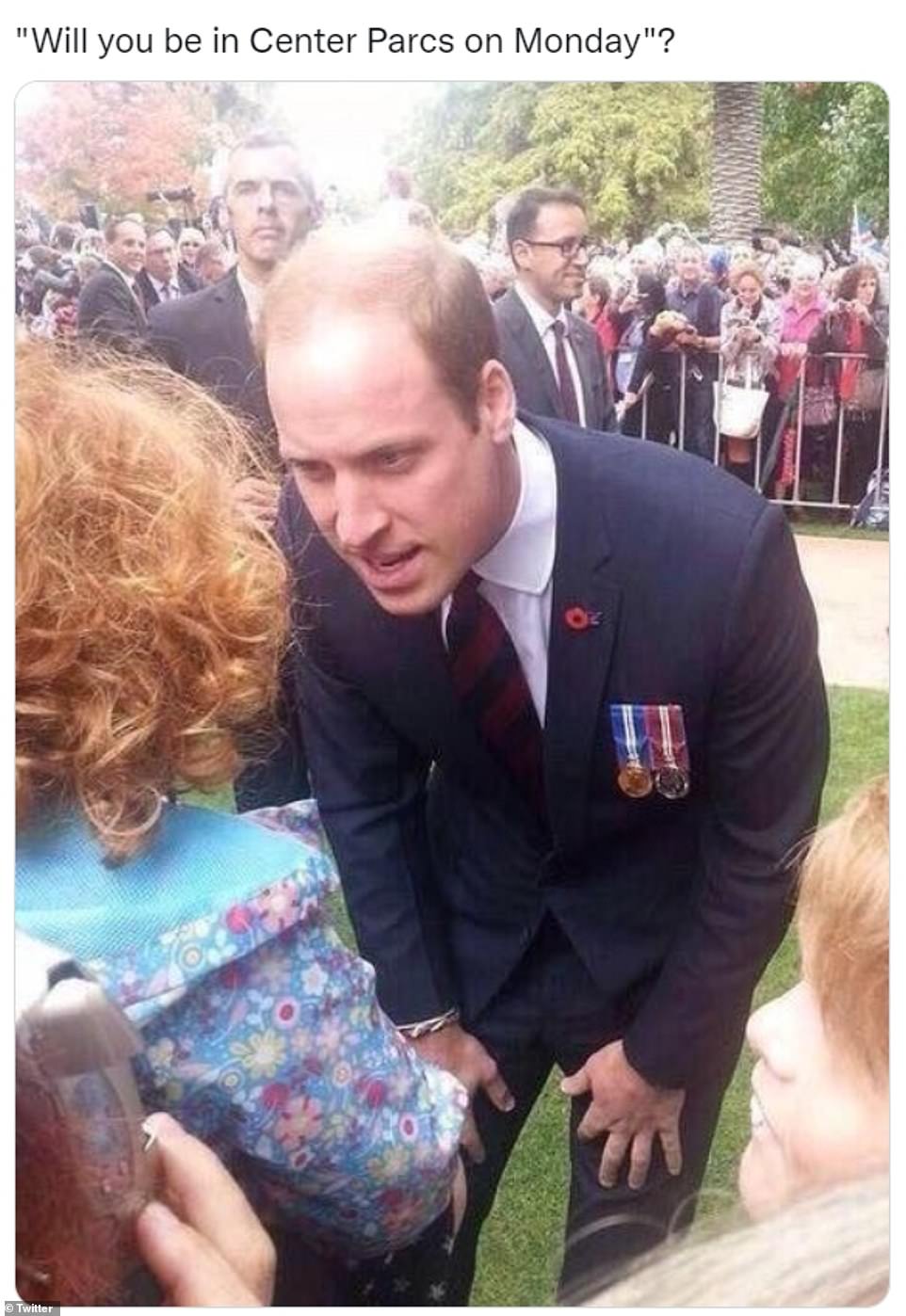 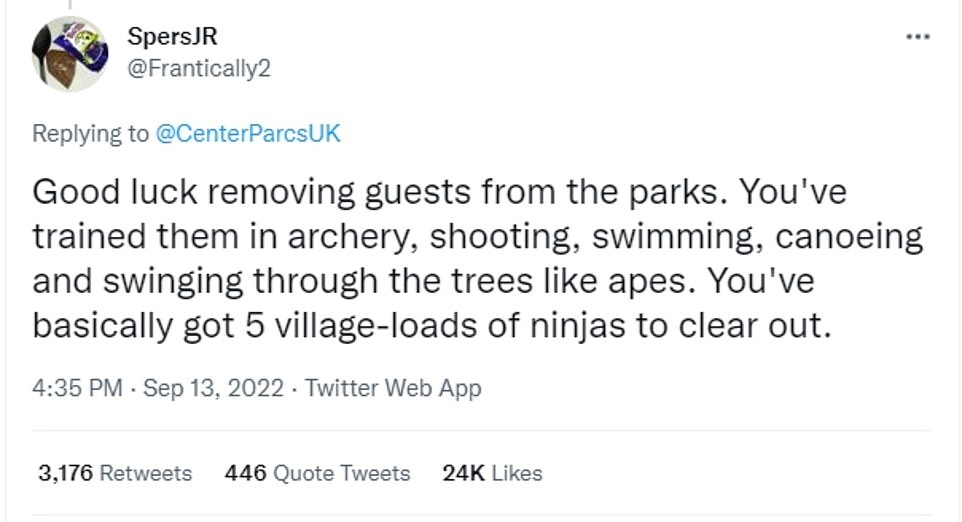 Amid the fury, social media users were also quick to poke fun at the holiday chain’s puzzling decision, sharing their best memes and mocking jokes at the situation

Official government guidance states the decision to close on the day of the state funeral rests on individual businesses, but the Cabinet Office advises consideration on the nature, location and tone of planned events.

A spokesman for rival resort Butlin’s said it will remain open, with new arrivals asked to arrive from 3pm Monday, two hours later than usual. This will ‘allow our team time to watch the funeral and pay their respects’, he added. 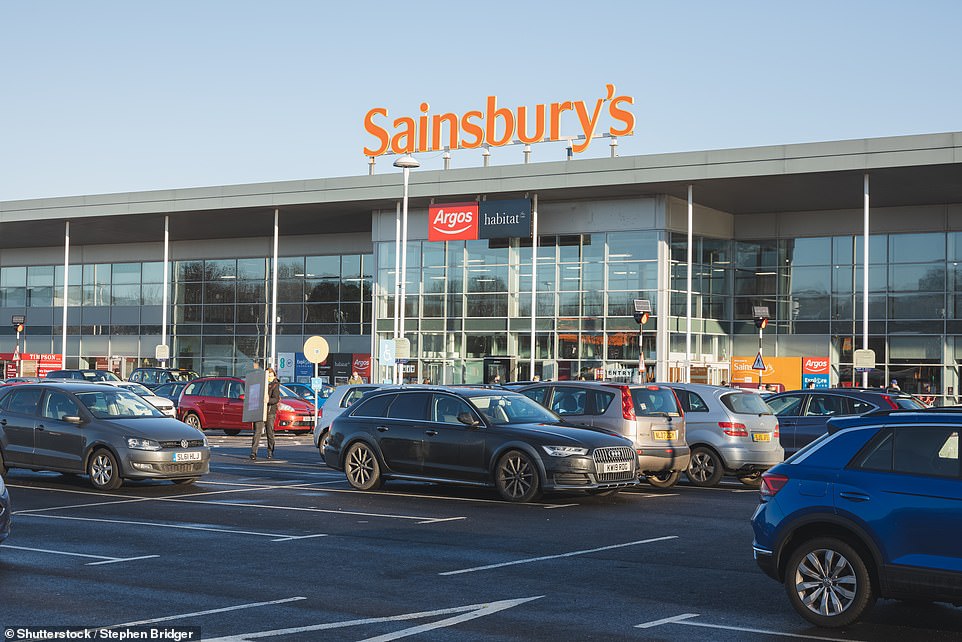 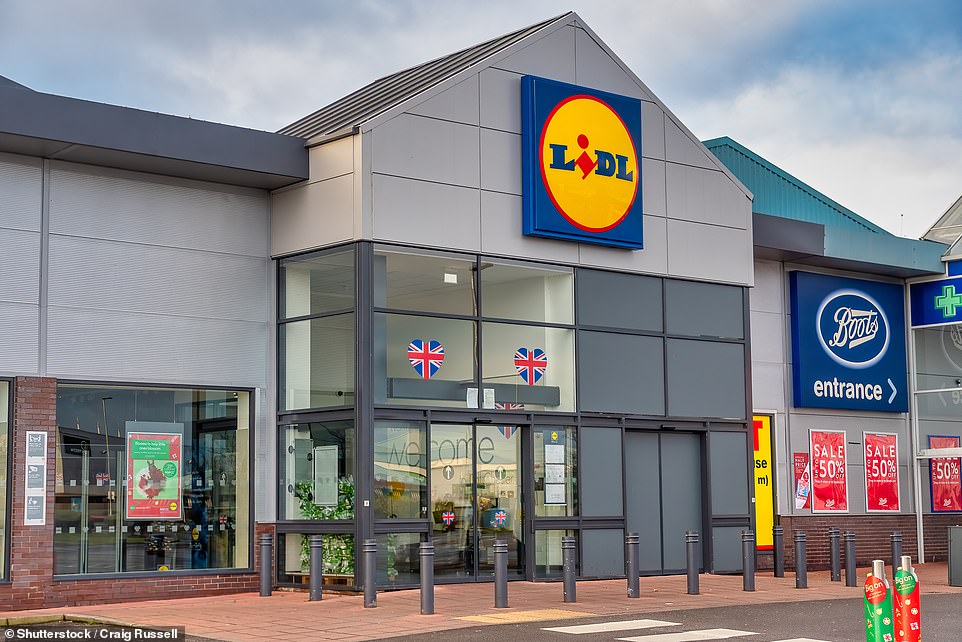 Lidl said they would be closing their stores across England, Scotland and Wales in honour of Her Majesty 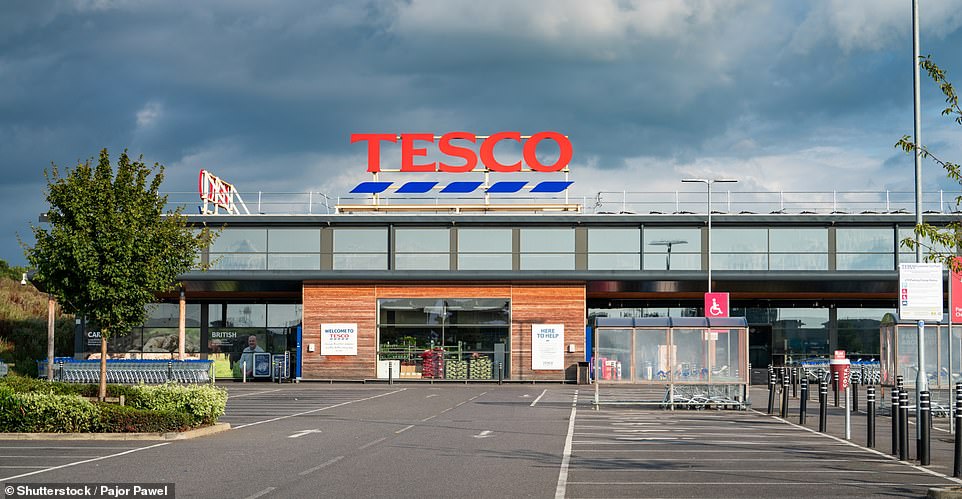 Tesco has said its large stores will also be shut all day and it will not be fulfilling online orders, while Express stores will remain closed until 5pm

What are the ‘Big Four’ supermarkets doing on September 19?

Tesco – The UK’s largest supermarket chain is closing all of its large stores all day on September 19. It is also cancelling all home deliveries scheduled for Monday.

Its Express stores will be open from 5pm, while a small number of stores in central London and Windsor will remain open all day for people attending the commemorations.

Sainsbury’s – Britain’s second biggest chain has announced it will be closing all of its supermarkets and Argos stores on the day of the funeral.

It added that convenience stores and petrol filling stations will only be open from 5pm to 10pm, while select stores in central London will be open for those attending the funeral in person.

Asda – The third largest supermarket chain in the country will be closing stores until 5pm and will not be offering online deliveries.

Morrisons – The retailer is another that plans to close its stores on September 19.

Other puzzling closures, cancellations and initiatives designed to show respect for the late monarch during the national period of mourning have raised eyebrows.

A local council was forced to change signs banning people from using bike racks due to the period of official mourning caused derision online, while a number of local authorities across England announced the decision to delay bin collections as a ‘mark of respect for Her Majesty’.

People complained after Norwich City Council’s decision to close various bike racks throughout the city to mourn the late monarch, who died on Thursday. The metal racks have been closed from September 9 until September 21.

Supermarket chain Morrisons later announced it had turned its checkout bleeps down and music and tannoy announcements have been switched off in stores as a mark of respect to the Queen.

The change was noticed by one customer, who took to Reddit to explain he was struggling to pay for his shopping after not being able to hear the ‘bleeps’.

Busking on the London Underground has also been suspended while the nation mourns. Transport for London (TfL) said the suspension applies to underground and railway stations throughout the period of national mourning, which ends following the Queen’s funeral on September 19.

A TfL spokesperson said: ‘During the period of national mourning, we have taken the decision to pause the busking scheme across our network, and we will reopen the scheme following this’.

And the Met Office was mocked last week after announcing a partial pause in its social media posts out of respect for the Royal family following the Queen’s death.

The forecaster told its followers it would ‘only be posting daily forecasts and warnings’ as ‘a mark of respect.’ But users were quick to question why sharing more detailed weather forecasts could be seen as ‘disrespectful’ when it is a vital public service.