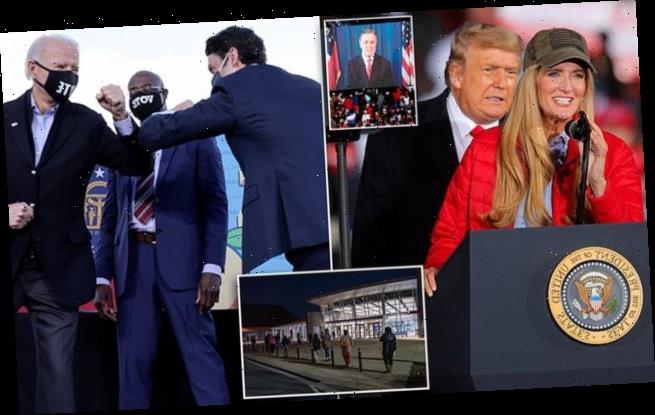 Georgia votes: Hundreds of thousands set to go to the polls to decide who controls the Senate after most expensive campaign in history, dueling Trump and Biden rallies – and Republicans torn apart by president’s desperate fraud claims

All eyes are turning to Georgia on Tuesday as hundreds of thousands head to the polls to cast their ballots in the two consequential runoff races that will decide Senate control – after a record-shattering 3 million voted early.

Voters began lining up in the Peace State at the crack of dawn Tuesday and voting ends at 7:00 p.m. – setting up Washington for a day of speculation and nail biting as the two races will not only determine which party controls the Senate, but also the trajectory of Joe Biden’s presidency.

If either Loeffler or Perdue hold onto their seat, Republican will maintain a majority in the upper chamber and more than likely block all legislative actions pushed by Biden.

But if both Warnock and Ossoff emerge victorious after Tuesday’s election, Democrats will have successfully split the Senate 50-50 with Vice President-elect Kamala Harris holding the tie-breaking vote.

The runoffs were triggered after none of the four candidates were able to reach the 50 per cent threshold needed in Georgia to outright win their Senate race on November 3. The state does not hold primary elections, but rather has all candidates on the primary ballot with a requirement that they earn at least half the vote to win. 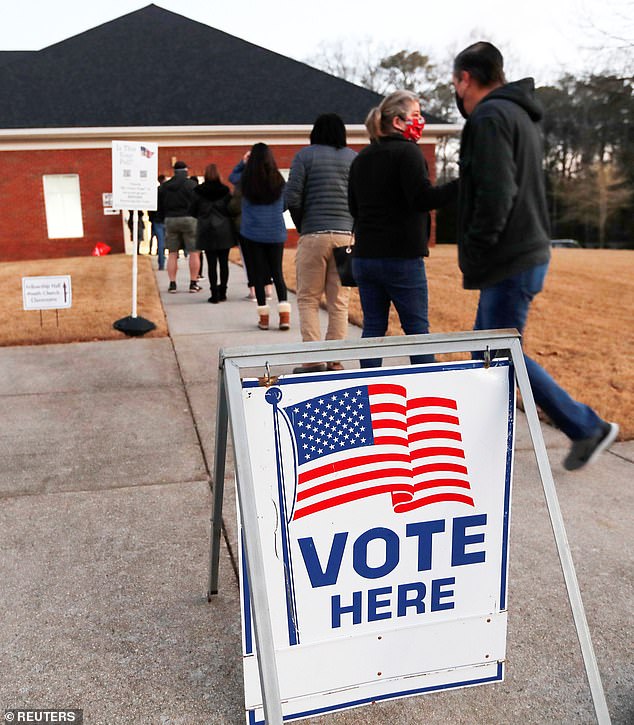 Voters in Georgia started lining up and casting their ballots Tuesday morning in the two runoff elections in the state, which will determine what party controls the Senate 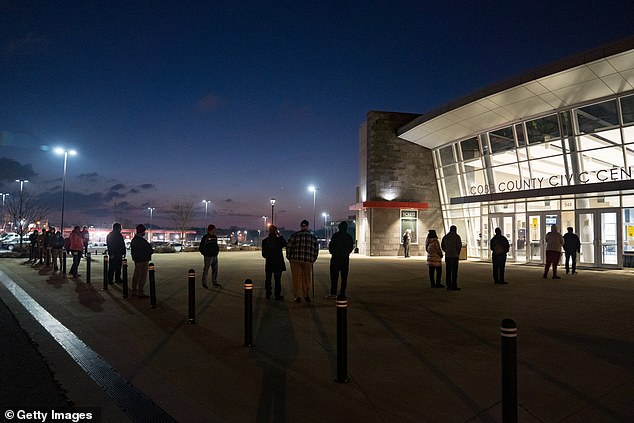 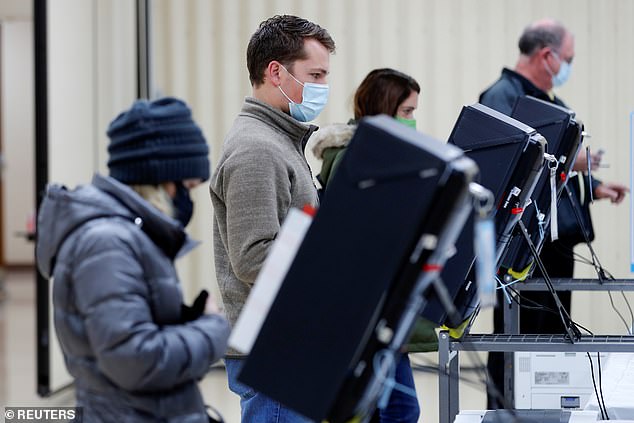 Hundreds of thousands of Georgians are expected to vote on Tuesday before the polls close at 7:00 p.m. – after a record-shattering 3 million already voted in the runoff elections early by mail or in-person 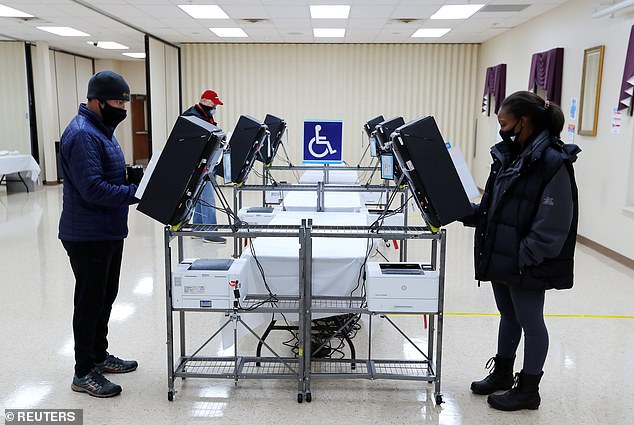 President Donald Trump and President-elect Joe Biden held dueling events in Georgia Monday to try and use their coattails to increase enthusiasm for their respective parties’ candidates.

The rallies, however, could be too little, too late.

Before Monday, more than 3 million Georgians already voted early in the Senate races – whether by mail or in person. This early voting figure far surpasses the previous record of 2.137 million votes cast overall in a runoff election before this year.

With around 5.5 million registered voters in Georgia, more than half of those who can vote have already done so before runoff election day on Tuesday.

Data from Georgia Secretary of State’s office indicates much more people showed up to vote early in person rather than absentee by mail – even in the midst of the pandemic.

Historically, Democrats do better in mail-in and early voting and Republicans perform better on Election Day. But in a year plagued with coronavirus restrictions and accommodations, it’s hard to say if that rule will still apply here. 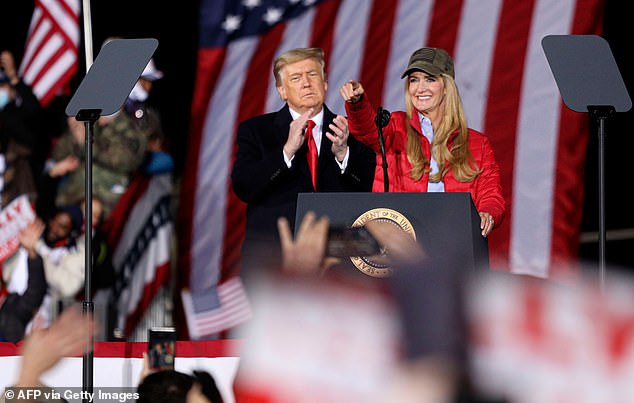 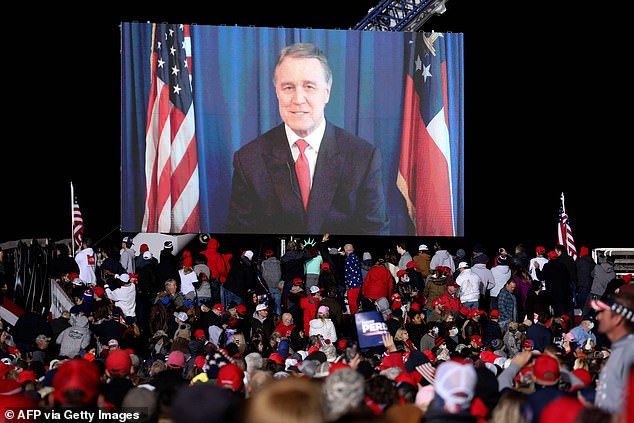 Perdue joined the rally remotely to address the crowd at one point. He is still quarantining at his home after contracting coroanvirus 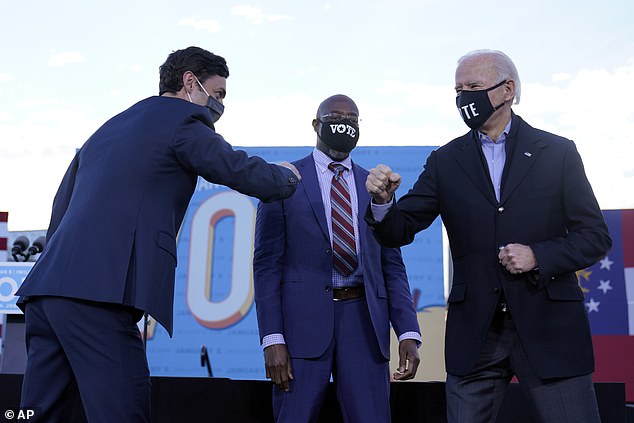 As it stands, Republicans expect to win both races – even though a Sunday poll shows Warnock and Ossoff ahead in their races by less than 2 per cent with Perdue standing a slightly better chance than colleague Loeffler.

The GOP is relying on earning at least 62 per cent of Election Day turnout, which is what Perdue got in November.

Trump, while pushing for Loeffler and Perdue’s reelections, also used his Monday night rally in Dalton County, Georgia to complain of his claimed widespread voter fraud and push his repeated – and largely unproven – allegations that the presidency was ‘stolen’ by Democrats.

Loeffler told Fox News on Monday night that she would join a dozen other Republican senators in a plot to challenge at least one state’s Electoral College results when Congress moves to certify the election for Joe Biden on Wednesday.

A group of House Republicans, led by Representative Mo Brooks of Alabama, started pushing the plan last month and have gained a lot of traction since then after the group of senators joined the effort.

Loeffler attended the rally Monday night, but Perdue is still quarantining after contracting COVID-19. He joined the rally by video for a short time to address the crowd gathered on the tarmac for one of Trump’s last rallies of his presidency.

During the rally, Trump demanded that Vice President Mike Pence ‘come through’ as he presides over Congress certifying the election on January 6 and Republicans carry out their plan to challenge the results.

‘I hope Mike Pence comes through for us. He’s a great guy,’ Trump told an audience Monday night. ‘Of course if he doesn’t come through I won’t like him quite as much.’

While the president’s biggest Capitol Hill allies challenge some of the states’ Electoral College counts, which could elongate the Congressional session for hours or even days, Pence will arrive just to announce the results.

Even though there is little to nothing Pence can do to change the outcome, Trump is suggesting he has the power to do so.

Thousands of the president’s most staunch supporters are descending on Washington D.C. on Wednesday to protest the election results, demanding Democrats ‘stop the steal’ and Trump be declared the true winner.

The GOP has been tearing itself apart from the inside out in the midst of the Georgia runoff as Republicans pick sides on standing with the president on his claims of widespread voter fraud or not.

Specifically, Georgia Republicans are publicly split on the matter.

In a call with Georgia Secretary of State Brad Raffensperger on Saturday, Trump pressured him to find 11,780 votes for him in the Peach State to overturn Biden’s win there.

Audio of the call was leaked – by Raffensperger himself – on Sunday, and revealed a desperate Trump who, at times, begged, flattered and threatened the Georgia official, who is a Republican.

Trump has also attacked Georgia’s Republican Governor Brian Kemp for not doing enough to try and overturn the results after the state went blue in the presidential elections.

Loeffler and Perdue, however, have stayed on the president’s side – not wanting to upset him and his supporters before their runoff elections.

05/01/2021 World News Comments Off on Georgia votes: Thousands go to the polls to decide control of Senate
Lifestyle