A giant cardboard cut-out of a cow has been erected on a Cotswold Common in an attempt to make drivers cut their speed – and save grazing cattle from being hit by cars.

Scores of cows and horses graze freely on the Minchinhampton, Rodborough and Selsley Commons during the summer months and ever year there are casualties, some fatal.

Now, Stroud Police have deployed the ‘Road Safety Cow’ cardboard model on Minchinhampton Common in an effort to reduce the number of accidents by making drivers slow down. 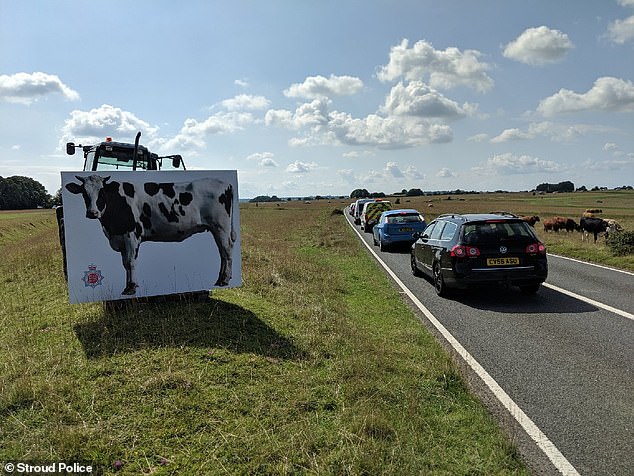 And they are asking motorists to think of a name for the black and white bovine which appears to dwarf the real thing.

The move is designed to cut crashes on the common where several animals are killed every year in collisions with motorists.

The arrival of the cut-out comes days after local woman was banned from driving after crashing into Alfie, the well known donkey who roams Rodborough Common. 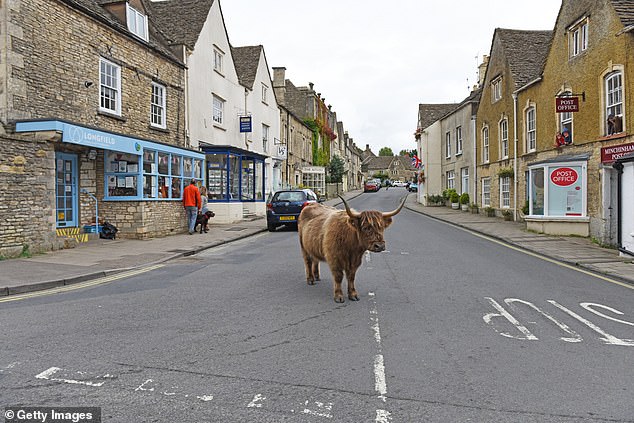 The move is designed to cut crashes on the common where several animals are killed every year in collisions with motorists. Pictured: A long-horned cow enters the town centre of Minchinhampton

Drivers are warned that they don’t just have to slow down but to be aware that the cattle can be unpredictable and are often difficult to see during the night.

A Tweet by Stroud Police says: ‘Our Road Safety Cow has just been deployed on Minchinhampton Common. Comment with your suggested names. We will choose one from the comments on Saturday morning.’

And it adds: ‘Our £CardboardCow has some top tips on Road Safety around grazing animals.

‘If animals are crossing the road do not try and squeeze past. Stop and wait as you would for a pedestrian.’ 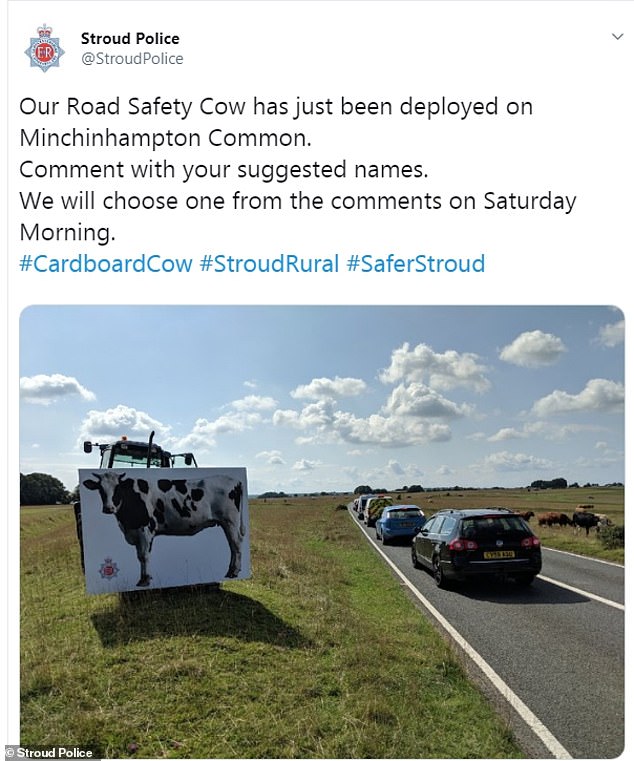 Stroud Police showed off their new sign in a tweet, before asking readers to send in suggestions for a name for the new cow

Minchinhampton Parish Council invested in a new Speed Indicator Device (SID) which has been deployed to several locations advising drivers to ‘slow down’ when approaching above the speed limit.

Residents say the cows continue the unique farming heritage of the area and help with the conservation of the local biodiversity.

In 2016, a cow and her calf were killed by a police car and van in separate incidents, days after being released on to Gloucestershire Commons.

Police say drivers stop and call the police on 101 or in the case of a death call 999.