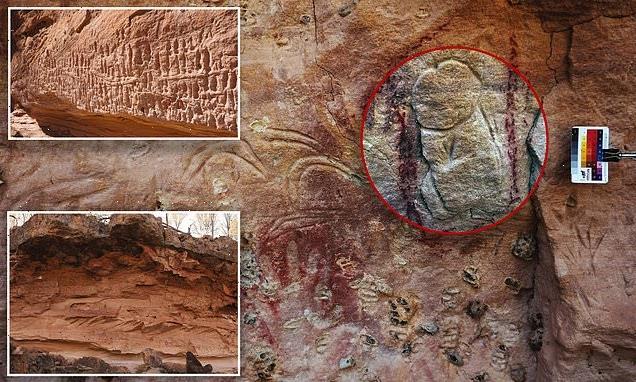 Giant penis carved into a rock face is discovered deep in the Australian outback – and it could be up to 5,000 years old

A giant engraved penis discovered at an Indigenous rock art site is not vandalism but part of an ancient Dreaming story.

Archaeologists from Griffith University and Iningai Traditional Owners worked together to catalogue the artwork inside a 160m-long rock shelter known as Marra Wonga located near Barcaldine, about 110km east of Longreach in Queensland’s outback.

The shelter is filled with more than 15,000 rock carvings, with a large portion of the artwork focused on telling the story of the ‘Seven Sisters’ from start to finish. 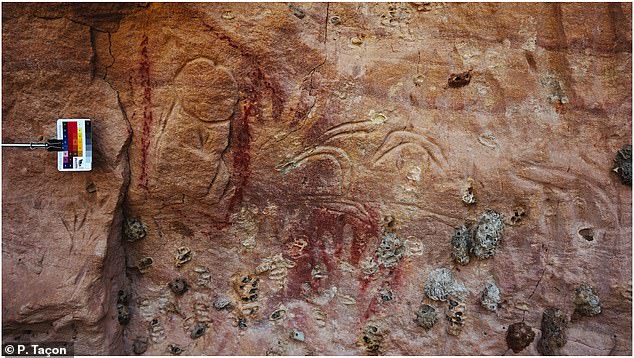 A large engraving of a penis following boomerangs in an Indigenous rock art site near Barcaldine, Central Queensland, is part of a 5,000-year-old Dreaming teaching site (pictured, the penis, representing Wattanuri, chasing after the sisters in the Seven Sisters story) 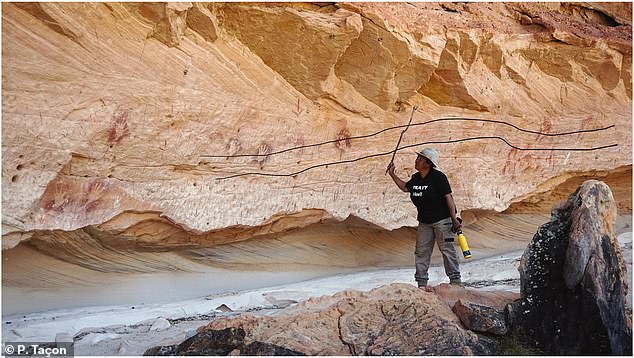 The site is believed to have been used as a teaching space (pictured, Indigenous researcher Suzanne Thompson in front of a Rainbow Serpent depiction)

The story is one told around the world and is often related to the Pleiades star cluster.

The penis engraving is part of the Seven Sisters story, representing Wattanuri.

‘In the story the sisters are pursued by a powerful ancestral being known as Wattanuri, who is often associated with the Orion constellation,’ Griffith University Professor Paul Tacon told Sydney Morning Herald. 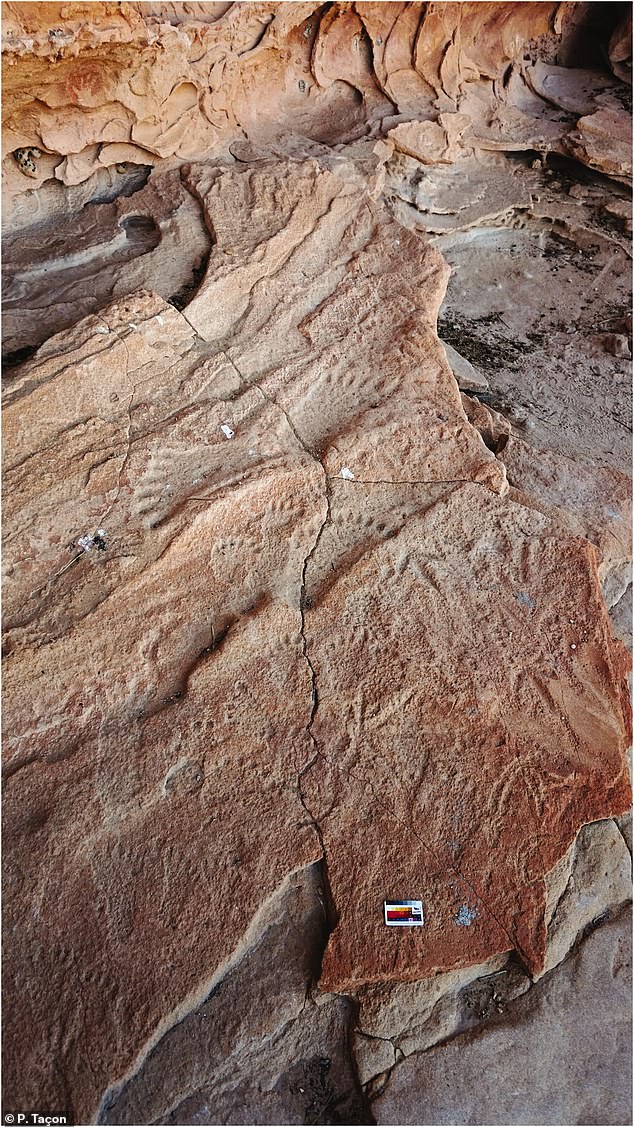 Other engravings, like six-toed feet, show the site was used to tell Dreaming stories (pictured, feet with varying numbers of toes, up to 11)

‘At one stage he goes under the ground and emerges as a giant penis and throws boomerangs at the sisters, which we see illustrated quite clearly in that panel.’

Mr Talcon said Marra Wonga, meaning ‘place of many stories’, is an extremely unique site and could have been used as a teaching space.

‘There’s no other site in Australia that features art like this telling the story from one end of the shelter to another,’ Prof Tacon said. 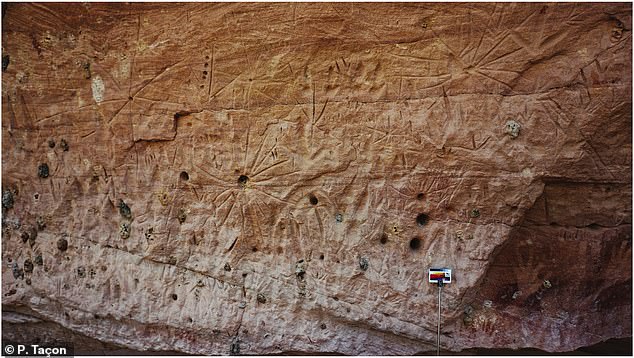 The site is the first in Australia to tell a story from its beginning to end (pictured, star designs representing the Seven Sisters)

Other artwork inside the cave, such as six-toed feet, show the cave was used to tell Dreaming stories.

Some engravings inside the cave are believed to be about 5,000 years old.

Yambangku Aboriginal Culture Heritage and Tourism Development Aboriginal Corporation managing director Suzanne Thompson initially called for the site to be documented in 2019 but the Covid pandemic prevented archaeologists from travelling to the site.

The rock shelter is located in Turraburra station, about 130km north of Barcaldine, and is managed by the Yambangku Aboriginal Cultural Heritage and Tourism Development Aboriginal Corporation. 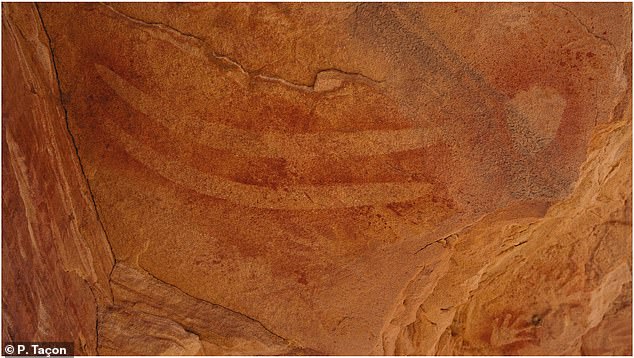 The unique site is located in Turraburra station, about 130km north of Barcaldine in Central Queensland (pictured, the outline of two boomerangs)

The Star Dreaming story of the Seven Sisters is one of the most widely distributed ancient stories amongst Aboriginal Australia. The songline for this story covers more than half the width of the continent, from deep in the Central Desert out to the west coast. The songline travels through many different language groups and different sections of the narrative are recognised in different parts of the country.

In the Seven Sisters story in Aboriginal Australia, the group of stars are Napaljarri sisters from one skin group. In the Warlpiri story of this Jukurrpa, the sisters are often represented carrying the Jampijinpa man Wardilyka, who is in love with the women. Then the morning star, Jukurra-jukurra, who is a Jakamarra man and who is also in love with the seven Napaljarri sisters, is shown chasing them across the night sky. They are seen to be running away, fleeing from the man who wants to take one of the sisters for his wife. However under traditional law, the man pursuing the sisters is the wrong skin group and is forbidden to take a Napaljarri wife.

So the Seven Sisters are running away from the Jampijinpa man, they travel across the land, and then from a steep hill they launch themselves into the sky in an attempt to escape. But the Jakamarra man follows the sisters into the sky, travelling in the form of a star seen in the Orion’s Belt star cluster, which is also seen as the base of the Big Dipper. So every night the Seven Sisters launch themselves from earth into the night sky, and every night the Jampijinpa man follows after them across the sky.