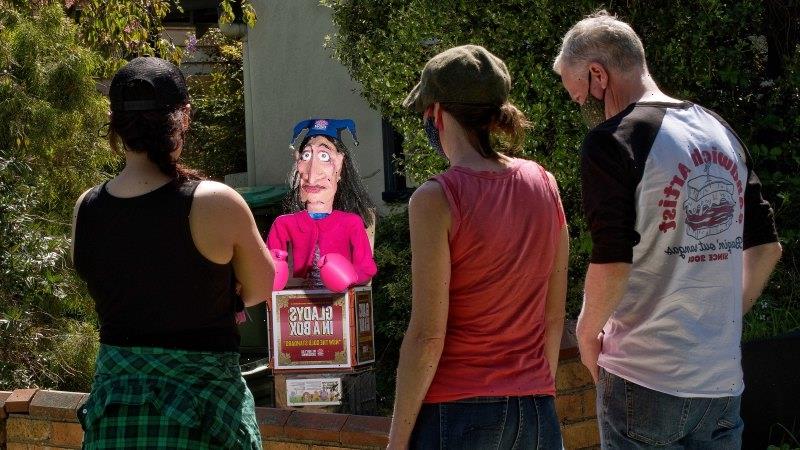 The news that NSW premier Gladys Berejiklian had resigned broke on Friday, just as a Melbourne couple were finishing making a “jack in the box” scarecrow that sends her up.

At first, Jodee and Ted feared they would have to scrap their papier mache caricature, which they planned to install that day in their front garden in Shaftesbury Parade, Thornbury. 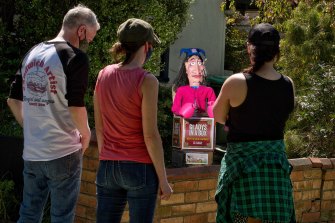 Then they realised Ms Berejiklian’s exit from office, following allegations of impropriety over grants, was a big talking point for passers-by.

“I think the timing has actually been very helpful — she’s in the news,” said Jodee, who did not want to give her surname.

The couple’s bold piece is one of the first entries in this year’s Scarecrow Season, running through October, in which residents make and display effigies, whether they are whimsical, personal or political.

The program, run by volunteers since 2012, was initially for residents of Rossmoyne Street in Thornbury but this year, due to popular demand, entries are open to all City of Darebin residents.

And Heidi Marfurt, one of the organisers, said people from elsewhere would not be turned away. 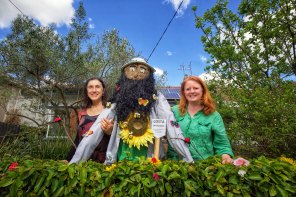 In previous years, the scarecrows have included Prime Minister Scott Morrison in a rubbish bin, Liberal politician Bronwyn Bishop with a helicopter and a mop-headed woman working from home. This year a Rossmoyne Street family have a Facebook site called Mice-olation for their installation about a family of mice.

Entry is free, but there will be no judging or prizes this year.

“Everybody gets the good karma from creating a bit of joy and excitement for others,” Ms Marfurt said. “We don’t need any pressure at the moment. We just need more fun.”

Jodee said in her model, Ms Berejiklian is depicted as a jack in the box, with fitted jacket and boxing gloves, because the real Gladys “pops up on the box all the time, and comes out fighting”. 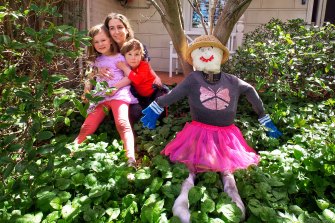 Some of Ms Berejiklian’s famous sayings are on the box, such as: “It’s not for me to comment on what other governments do.”

Jodee said it was a way “to vent about Gladys because she’s been on high rotation in our conversations this year”.

Allison Lamb of Clifton Hill, who on Sunday was touring the scarecrows with her husband, a friend and the friend’s two young children, said: “I think it’s fantastic. It’s really well done, and it’s very topical at the moment.

“I think everybody has to laugh and find some sort of light in the current situation, and this is a great activity for families to be outside and have community engagement without any risks.”

Ms Marfurt, of Rossmoyne Street, has made a scarecrow depicting Gardening Australia host Costa Georgiadis, using an old wig for a beard, button eyes and a shirt over milk bottle arms.

Her neighbours, Natalie Jamieson and her daughter Emma, 17, crocheted and knitted bees, butterflies and beetles for the piece.

Ms Marfurt hopes Scarecrow Season connects people. “I think it’s really important, especially in lockdown, for people to think that they’re part of something bigger than themselves,” she said.

Darebin Libraries has produced a video on how to make a basic scarecrow. The map of sites and entry details are on the Facebook page Rossmoyne Street Thornbury.