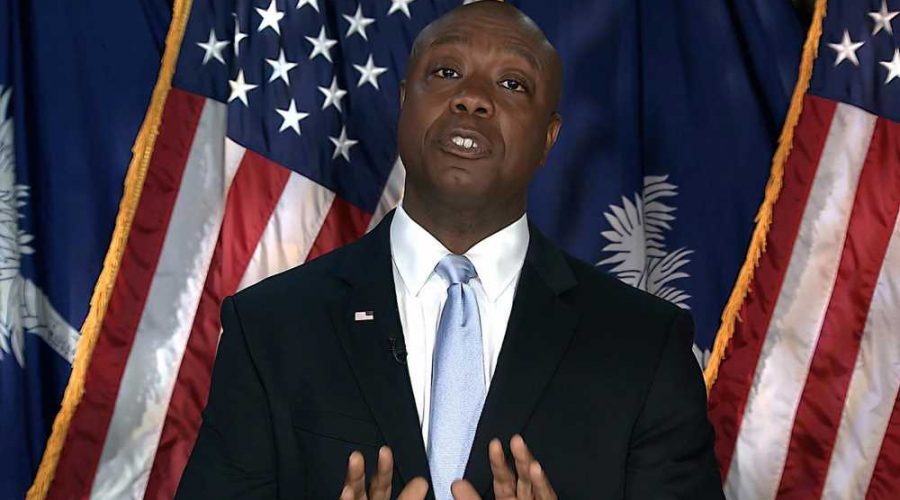 Andrew Yang has momentum — can he keep up to be next NYC mayor?: Goodwin

Media cheers a return to the failed Iran deal: Goodwin

There were two big speeches in Washington last week, and one was terrific. President Biden gave the other one.

Offering the opposition party’s response to a president’s address to Congress is not easy. The trappings of the office and the House chamber are impossible to compete with when you’re standing alone in front of a camera, not to mention that the other guy is the commander in chief and you’re not.

Those built-in disadvantages make Sen. Tim Scott’s achievements all the more remarkable. The South Carolina Republican’s answer to Biden wasn’t just an effective political counter. It was, in all ways, a far superior speech.

Had it been given by a president, it would have been a national sensation.

The many contrasts were striking. Biden talked America down by building the government up, painting 330 million people as hopelessly lost unless Washington takes more and more control of the economy and everyday life. His plans for $6 trillion of spending and tax hikes are so far out of the mainstream that they are by definition radical.

Similarly, Biden’s continuing refrain of “systemic racism” is fundamentally at odds with his promise to unite the country. A reckless charge of racism might silence speech in college dorms, but coming from a president, it’s an intolerable insult to millions of people and fuels growing rancor.

Scott, the only black GOP senator, gracefully sliced and diced Biden’s remarks with a tone of disappointment, lamenting “this feeling that our nation is sliding off its shared foundation.”

He pushed back against the unaffordable price of Biden’s overreach and Democrats’ determination to ram the measures through Congress on party-line votes.

Scott offered contrast by noting how, with Donald Trump in the White House and the GOP holding the Senate, “we passed five bipartisan COVID packages,” with all five bills getting 90 votes in the Senate.

Yet it was on racial issues where Scott put Biden and the entire left to shame.

“I have experienced the pain of discrimination. I know what it feels like to be pulled over for no reason. To be followed around a store while I’m shopping,” he said evenly before quickly adding: “I’ve also experienced a different kind of intolerance. I get called ‘Uncle Tom’ and the N-word by progressives, by liberals.”

He cited his efforts to get a police reform bill through the Senate after the deaths of Breonna Taylor and George Floyd, only to have Dems use the filibuster to kill it. Dems, Scott said, “want the issue more than they wanted a solution.”

He called the practice of having children focus on skin color a new racism and said it was “absurd” for Biden to refer to Georgia’s new voting law as worse than Jim Crow.

“Hear me clearly,” he said. “America is not a racist country. It’s backwards to fight discrimination with different types of discrimination. And it’s wrong to try to use our painful past to dishonestly shut down debates in the present.”

Given the shaky state of our union, Scott’s speech is the most valuable thing said in Washington this year. In under 15 minutes, he made vastly more sense than Biden did in 65 minutes, while also outlining the case against the nihilistic attacks on America’s history, culture and institutions.

But what happened after his speech is almost as important. The reaction on social media and elsewhere confirmed everything Scott said about the left’s intolerance and bigotry.

He was instantly insulted as an “Uncle Tim” on Twitter for saying America is not a racist country and, revealing its own bias, Twitter highlighted the offensive term for 12 hours.

This is the same left that is quick to label as racist anyone who doesn’t subscribe to its agenda. Yet here it is, actually using racist language against a black man because he dares to disagree.

Joy Behar and Jimmy Kimmel, two white television personalities who previously wore blackface, scaled the heights of hypocrisy by mocking Scott’s heartfelt speech. Kimmel called Scott a token and Behar said he didn’t know what he was talking about.

For Scott, the outpouring of vitriol was proof that blacks “cannot step out of your lane,” as he put it the next day.

The attacks were indeed brazen but, sadly, consistent with the mindset of many Dems. Black supporters of Trump were mocked as traitors to their race, mostly by far-left whites who presume to know how blacks should think.

Biden himself scolded a black interviewer, saying “You ain’t black” after the interviewer suggested he was undecided about how to vote last year.

Sadly, this is increasingly leftists’ approach to all people on all issues. Your authenticity and legitimacy are recognized only if you behave in the way they say you should, based on your race, ethnicity or gender.

There is only one accepted path, and those who disagree are stupid or racist or misogynist — and that includes blacks, Latinos, Asians and women. No honest disagreement is acceptable. It’s either conform or we will ridicule and silence you.

This intolerance is the greatest threat to America and is turning public life into a nightmare. It makes the nation brittle by leaving no room for disagreement and offers no respect for those who differ.

Worse, this coercive approach is force-fed into the education system. Even in kindergarten and elementary grades, children are being taught to judge themselves and others by race, with whites deemed oppressors and nonwhites victims. If you or your parents don’t agree, shut up or leave.

Biden, who seems besotted by this madness, is giving it a boost by handing out grants as an incentive for schools to teach critical race theory, which pits people against each other on the basis of race.

Thankfully, Scott, for one night at least, was the antidote. He finished his remarks in uplifting fashion, saying, “Original sin is never the end of the story. Not in our souls, and not for our nation. The real story is always redemption.”

With that, he recited the words to a song based on Scripture, ending with: “May His favor be upon our nation for a thousand generations, and your family and your children and their children.”

Call me cynical, but when the FBI raided Rudy Giuliani’s apartment, my first reaction was to wonder if the FBI is playing politics again.

Was this a new version of 2016? Was the raid payback for Giuliani’s work for former President Trump, or for helping to expose Hunter Biden’s laptop?

Leaks about the raid to the FBI’s favorite errand boys stoke more suspicions. I hope I’m wrong, but I fear I’m not.

Reader George DeSanto defends the annoying noise of motorcycles. He writes: “Straight pipes save lives. Loud exhaust makes pedestrians and motorists aware of the biker. Those e-bikes are silent and deadly, and crossing streets can be hazardous with delivery bikes zipping along, many going the wrong way. Some noise would make them safer.”