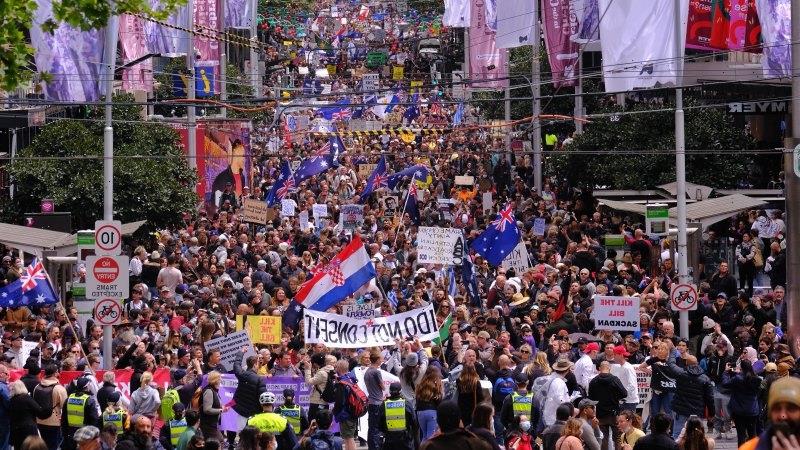 Victoria’s opposition has moved to distance itself from demonstrators who chanted death threats against Premier Daniel Andrews at a weekend rally, urging those upset with vaccine mandates and proposed pandemic laws to take their frustrations out at the ballot box.

Thousands of protesters – including controversial Liberal MP Bernie Finn, who addressed the crowd – gathered in Melbourne’s CBD on Saturday to march against the Andrews government’s proposed pandemic legislation and coronavirus vaccine mandates, with several angry demonstrators waving signs calling for MPs to be hanged, and others carrying nooses.

Opposition Leader Matthew Guy said he did not “endorse extremism” and that the protest reflected the “nervousness, angst and fear” felt by Melburnians after living through six lockdowns totalling more than 260 days since March 2020.

“People’s frustrations should be taken out at the ballot box,” he said.

Mr Guy, who attended a public forum on the pandemic laws in Wantirna, said the “silly images” some protesters brought to the rally were a reflection of individual demonstrators, not on everyone who attended.

Shadow treasurer David Davis, who addressed a similar protest on the steps of State Parliament last week, rejected the suggestion his presence damaged the Liberal Party’s brand. He described his speech, which encouraged people to “fight at all levels”, as “entirely responsible” and focused on the “flaws in this pandemic legislation”.

“People have a wide range of views, that is normal in a democracy,” he said. “I don’t believe in any violence or any wrongful approach to demonstrations. I think people should be civil, reasonable and fair,” he said. “We need to fight this legislation. That means in the Parliament and in the community.”

On Saturday, Mr Finn told the crowd of protesters they must “kill this bill”.

“This bill, it’s so evil. It’s so wrong. It’s something that must be defeated,” he said. “Despot Dan wants to become an emperor. Enough is enough.”

With State Parliament to resume on Tuesday, the opposition is expected to try to delay debate on the controversial legislation – which would give the Premier the power to make a pandemic declaration – until at least Wednesday, limiting the time crossbench MPs will have to amend the bill this week.

Pushing back the bill could also expose the government and crossbench MPs to another fortnight of public pressure and possible abuse as debate over the legislation intensifies.

The government initially planned to push its pandemic legislation, which will replace state of emergency powers, through Parliament this week before existing emergency powers expire on December 15.

On Sunday, The Age revealed the government was considering at least four substantive changes to appease crossbench concerns by improving transparency and making it easier to appeal detention orders at the Victorian Civil and Administrative Tribunal rather than through the court system.

Crossbench MPs also want the government to amend the legislation to force the publication of chief health officer advice, a statement of reasons and the justification for lockdowns more quickly than the 14-day time frame stipulated in the proposed laws.

Creative Industries Minister Danny Pearson, who voted in favour of the bill in the lower house, left the door open for further changes to the legislation, insisting the opposition and crossbench had the right to move amendments. He said negotiations were ongoing.

“I voted for the bill and I supported the bill,” he said. “We have worked very hard to get it right. The debate will occur and, ultimately, the Legislative Council will form its own view on this legislation”

The opposition, which has vowed to scrap the laws if elected, will move amendments in the upper house including an attempt to force the government to release health advice used to justify a lockdown within 24 hours of the order being issued.

Under the opposition’s proposals, any orders such as a curfews and border closures could be overturned by a chamber of Parliament. A special majority – three-fifths of members in both the upper and lower houses – would need to support a lockdown extension for it to continue.

Victoria on Sunday recorded 905 COVID-19 cases and four deaths. The Health Department said there were 394 Victorians in hospital with coronavirus.

Health authorities said 93.1 per cent of Victorians aged 12 and over had received at least one dose of a vaccine and 87 per cent had received a second dose.

On Sunday the Victorian government also announced an insurance scheme for event organisers as part of a multimillion-dollar package to support the return of live music. Music venues will be able to apply for financial assistance from an $8 million fund to recruit and train new staff. An additional $8 million will be offered to event organisers forced to cancel or reschedule concerts and festivals, and $4 million will be spent luring live artists back to Melbourne’s CBD.