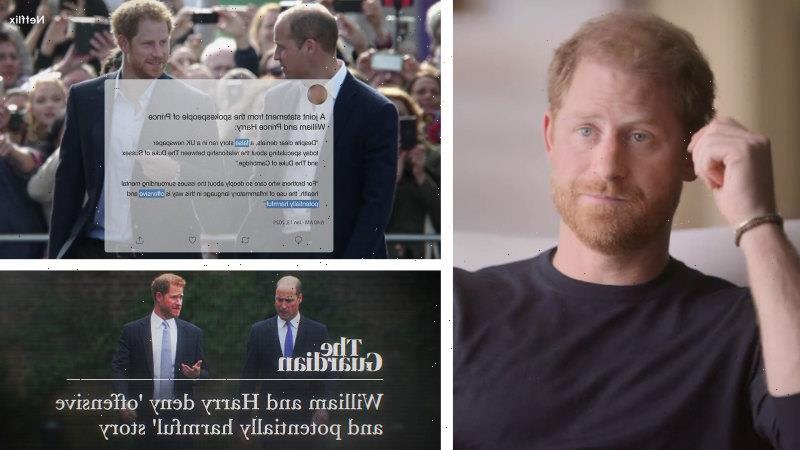 London: Prince Harry has escalated his personal war with his family and the British press beyond a point of no return, claiming he did not give approval on a joint statement with his brother denying he bullied them out of royal duties and blamed the media for his wife’s miscarriage two years ago.

The second instalment of the Duke of Sussex and wife Meghan’s Netflix documentary series has more than likely tipped the scales in the ongoing feud within the British royal family, with Harry claiming his brother, William, screamed at him and his father, the King, said “things that simply weren’t true” during a meeting with the late Queen about his future in the royal family. 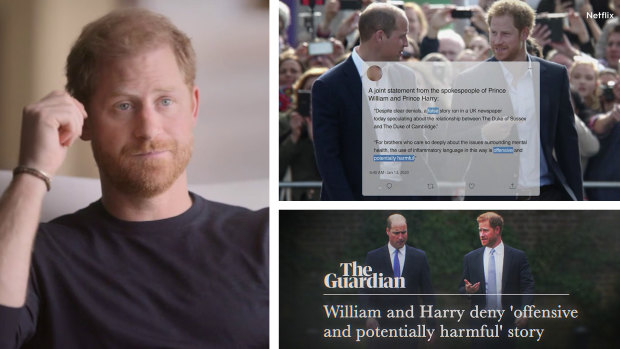 Prince Harry says he did not give approval on a joint statement with his brother William denying he bullied them out of royal duties.Credit:Netflix

As King Charles marks 100 days since his ascension to the throne, any hopes that the fractured relationship with Harry could be repaired now appears to be over.

The long-simmering family dispute has now become a “global event”, with claims of “institutional gaslighting”, and allegations that “they”, presumably Buckingham Palace, lied to protect one brother but were unwilling to tell the truth to protect another.

The Sussexes’ controversial documentary came to a conclusion on Thursday, giving the world unprecedented access to the couple’s private life while the spotlight was shone on their relationship with the Palace and senior members of the Royal family.

It was three hours of at time compelling and, at times, uncomfortable viewing. Whichever side viewers had previously taken in the debate it was hard not to feel some sort of sympathy for the plight of the pair while adjusted to life under intense public scrutiny. There are always, of course, mitigating factors, but it is clear they were both pushed to the brink and were met with unsympathetic ears.

It was hard not to think of those scenes in Helen Mirren’s The Queen, where Tony Blair, played by Michael Sheen, is tearing his hair out at the institution’s rigidness and inability to react to a crisis following the death of Harry’s mother, Diana, the Princess of Wales.

In a revealing segment, Harry conceded that he hated himself for how he initially reacted to his wife’s depression and suicidal thoughts.

Describing the moment that she confided in him, he said: “I was devastated. I knew that she was struggling, we were both struggling. I never thought that it would get to that stage and the fact that it got to that stage. I felt angry and ashamed.”

He said leaked plans he sent by email to his father which detailed how he and his family wanted to move to Canada led to a crisis meeting at Sandringham in early 2020, where it quickly became clear that wasn’t going to work out.

“It was terrifying to have my brother scream and shout at me and my father say things that weren’t true and my grandmother sit there quietly and take it all in.

“The saddest part of it was this wedge created between me and my brother so that he’s now on the institution side.”

Harry said he was not consulted before a joint statement from the brothers was issued denying a story that William had bullied the couple out of their duties. He realised at that point that the institution was willing to protect one brother ahead of the other.

Amid everything which has occurred in the past three years it was easy to forget Charles, the then Prince of Wales, led Meghan down the aisle at their wedding at Windsor.

Of her wedding, she said: “Harry’s dad is very charming. I said to him, I’ve lost my dad in this, so for him for be my father-in-law was really important to me.”

Meghan said she was close to her father growing up but that their relationship fell apart “when the media got involved”.

She said it was “very embarrassing for the family” when he started criticising the royals and the late Queen and Charles advised her to send a letter, which was subsequently leaked to the Daily Mail.

“It was horrendous,” she said. Meghan said that everything had spiralled out of control following that letter’s publication and her decision to pursue legal action.

“I believe my wife suffered a miscarriage because of what the Mail did,” Harry said.

“I watched the whole thing. Now do we absolutely know that the miscarriage was caused by that? Of course we don’t. But bearing in mind the stress that that caused, the lack of sleep and the timing of the pregnancy, how many weeks in she was, I can say from what I saw that that miscarriage was created by what they were trying to do to her.”

The series is unlikely to shift the views of the British public in any major way, or even those beyond the UK’s shores, many of whom long made up their mind as to which side they have chosen. But it should prompt a moment of reflection as to how the pair were, at times treated, even if they were willing participants in the game.

William and his wife, Catherine, remain the most popular royals in all published polling and they are unlikely to react publicly to Harry’s version of events. They have proved themselves to be shrewd operators and the documentary has reinforced that.

And ultimately the King’s favourability rating last month was 54 per cent, up 11 percentage points on a previous survey in March. His coronation in May could give his rating a further boost.

Whether Harry and Meghan will be at Westminster Abbey might hinge on what happens next. Harry’s tell-all book, Spare, is out in January. The chance for healing might have already passed all parties by.