The British government has pressed the reset button, hoping a new crop of MPs will give an unqualified, enthusiastic “yes” to its recompiled Brexit deal.

The debate over the election on Tuesday was typically dysfunctional. For hours in the House of Commons Conservatives and Labour argued over whether there should be an election on December 9 or 12. 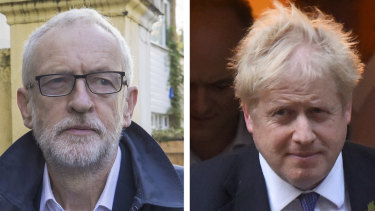 Basically, the former date would mean more students were more likely to vote for Labour in winnable seats.

But neither side could admit it was a bare political fight. So they came up with endless excuses.

Labour said it should be earlier, because voters didn’t like to vote in the dark, those three days representing a vital extra minute of daylight. 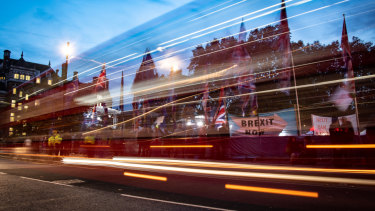 Supporters and critics of Brexit are seen through the trails of car lights as they protest opposite the Houses of Parliament on October 29.Credit:Getty Images

The Conservatives insisted it must be the 12th, because the 12th was a Thursday, and elections are always on Thursdays, so voters would be helplessly confused if one wasn’t.

But as plain-spoken Labour MP Jess Phillips pointed out, there were two bigger problems here.

The first is that a lot of people have been arguing against a second Brexit referendum on the basis that it would be an ugly affair that would further expose the country’s deepest divisions. 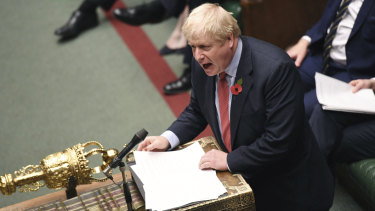 But this election is being explicitly, vigorously framed by Prime Minister Boris Johnson as a “get Brexit done” election – in other words, a quasi-referendum.

The second problem is, what happens if it doesn’t work? What if electors return a hung parliament still unable to deliver Brexit? In that case, all an election will have done is waste almost all of the three-month Brexit extension the EU has just granted.

On the face of it, this is an unlikely result.

Since Johnson’s arrival at Number 10 with a gung-ho Brexit strategy his party has soared in the polls, winning Brexiters back from Nigel Farage’s Brexit Party.

Labour slumped then flatlined, losing support to the Liberal Democrats who committed wholeheartedly to a “stop Brexit” policy, and due to disillusionment with Labour leader Jeremy Corbyn.

The Conservatives enjoy a steady 10-point lead over Labour, and Corbyn is the most unpopular political leader in the country’s history, on some figures.

But this may not be the last word.

Two years ago everyone was convinced Theresa May had Labour on the ropes, and she called a snap election to cement her advantage.

Her subsequent disastrous election performance, leaving her in charge of a minority, near-paralysed government, was partly her fault and partly her party’s. 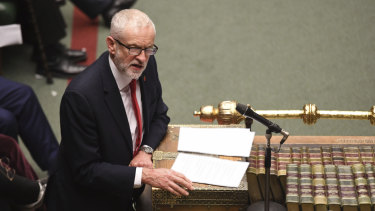 But it was also a credit to Corbyn, the Labour leader who appears uncomfortable and aimless in Parliament, but who proved adept at delivering cut-through messages on the election stump that boosted Labour’s core vote, though it failed to win over more moderate parts of the country.

The Prime Minister is personable and entertaining but can also come across as a snake-oil salesman, a man who craves power more than principle.

In the cold and dark of midwinter Britain, gloomy voters may cast a more cynical eye at Johnson, who has broken the central promise of his early prime ministership: to deliver Brexit in 2019.

They may resent being forced out of their central heating to a draughty village hall to cast a vote in an election that Johnson only a month or so ago was insisting nobody wanted and wasn't necessary because he would get Brexit done.

The Prime Minister is personable and entertaining but can also come across as a snake-oil salesman, a man who craves power more than principle.

Voters may also feel drawn to a socialist government promising to coddle the nation rather than expose it to the Arctic winds of post-Brexit international competition.

Johnson faces enemies on both sides: Farage is already campaigning loudly on the slogan that Johnson’s deal is “just not Brexit”, that it represents exactly the compromises he once promised never to make.

And there is plenty of ammunition for this: the Conservatives’ own former parliamentary allies, the Northern Irish DUP, are coldly furious at what they see as a betrayal Brexit that would cast their nation adrift on the other side of a customs border from the rest of the UK.

The Tories will lose seats to the SNP in Scotland and to the Lib Dems in the south, making it even harder to win a majority.

30/10/2019 World News Comments Off on Have you tried turning it off and on?: Johnson’s Brexit election ploy
Lifestyle