Honolulu: Abigail Kinoiki Kekaulike Kawānanakoa, the so-called last Hawaiian princess whose lineage included the royal family that once ruled the islands and an Irish businessman who became one of Hawaii’s largest landowners, died on Sunday. She was 96.

Her death was announced on Tuesday AEDT morning outside ʻIolani Palace, America’s only royal residence, where the Hawaiin monarchy dwelled but now serves mostly as a museum. 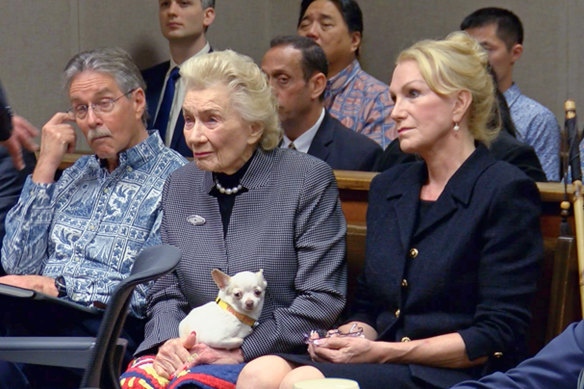 Abigail Kawananakoa, left, and her wife Veronica Gail Worth, right, appear in state court in Honolulu in 2018.Credit:AP

As it rained, Paula Akana, executive director of the palace, and Hailama Farden, of Hale O Nā Aliʻi O Hawaiʻi, a royal Hawaiian society, both walked down the palace steps and driveway to read the announcement in Hawaiian.

A news release later said she died peacefully in her Honolulu home with her wife, Veronica Gail Kawānanakoa, at her side.

“Abigail will be remembered for her love of Hawai’i and its people,” her 69-year-old wife said in a statement, “and I will miss her with all of my heart”.

Kawānanakoa held no formal title but was a living reminder of Hawaii’s monarchy and a symbol of Hawaiian national identity that endured after the kingdom was overthrown by American businessmen in 1893. 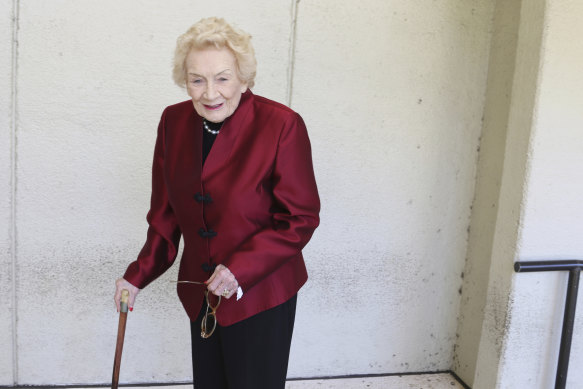 “She was always called princess among Hawaiians because Hawaiians have acknowledged that lineage,” Kimo Alama Keaulana, assistant professor of Hawaiian language and studies at Honolulu Community College, said in a 2018 interview.

“Hawaiians hold dear to genealogy. And so genealogically speaking, she is of high royal blood.”

He called her “the last of our alii,” using the Hawaiian word for royalty: “She epitomises what Hawaiian royalty is — in all its dignity and intelligence and art.”

James Campbell, her great-grandfather, was an Irish businessman who made his fortune as a sugar plantation owner and one of Hawaii’s largest landowners. 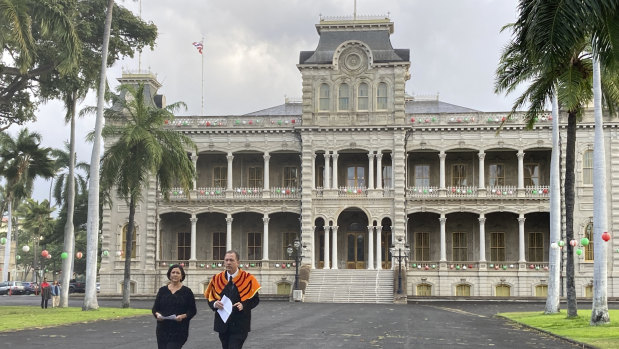 He had married Abigail Kuaihelani Maipinepine Bright. Their daughter, Abigail Wahiika’ahu’ula Campbell, married Prince David Kawānanakoa, who was named an heir to the throne.

After the prince died, his widow adopted their grandchild, the young Abigail, which strengthened her claim to a princess title. She acknowledged in an interview with Honolulu Magazine in 2021 that had the monarchy survived, her cousin Edward Kawānanakoa would be in line to be the ruler, not her.

“Of course, I would be the power behind the throne, there’s no question about that,” she joked.

Known to family and close friends as “Kekau,” she received more Campbell money than anyone else and amassed a trust valued at about $US215 million.

She funded various causes over the years, including scholarships for Native Hawaiian students, opposing Honolulu’s rail transit project, supporting protests against a giant telescope, donating items owned by King Kalākaua and Queen Kapiʻolani for public display, including a 14-carat diamond from the king’s pinky ring, and maintaining ʻIolani Palace.

“As a longtime benefactor for the Friends of ʻIolani Palace and many other Native Hawaiian causes, Princess Abigail’s generosity and contributions have greatly benefited our lāhui,” state Senator Jarrett Keohokalole and Representative Daniel Holt, leaders of the Legislature’s Hawaiian caucus, said in a statement, using a Hawaiian word that can mean “Hawaiian community”. 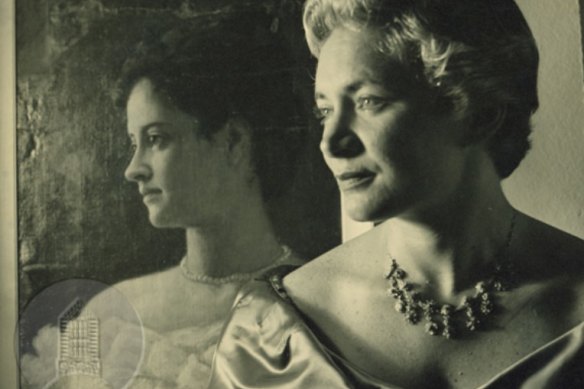 Governor Josh Green ordered the US and Hawaii state flags to be flown at half-staff at the state Capitol and state offices until sunset this Sunday, saying “Hawaii mourns this great loss.”

Critics have said because there are other remaining descendants of the royal family who don’t claim any titles, Kawānanakoa was held up as the last Hawaiian princess simply because of her wealth and honorific title.

Hawaiian activist Walter Ritte said many Hawaiians aren’t interested in whether she was a princess and that her impact on Indigenous culture was minimal.

“We didn’t quite understand what her role was and how she could help us,” Ritte said.

Many Hawaiians couldn’t relate to her, he said. “We call it the high maka-maks,” he said using a Hawaii Pidgin term that can mean upper-class.

Born in Honolulu, Kawānanakoa was educated at Punahou, a prestigious prep school. She also attended an American school in Shanghai and graduated from the all-female Notre Dame High School in Belmont, California, where she was a boarding student.

She was engaged briefly to a man, but most of her long-term relationships were with women.

“She was always curious about what people would do for money,” said Jim Wright, who was her personal attorney since 1998 until she fired him in 2017 during a bitter court battle over control of her trust.

He recalled a time when the bishop of the Catholic Diocese of Honolulu asked for a $US100,000 gift to mark the canonisation of St. Marianne. She told him she would give the church the money only if she could get a photo of Pope Benedict XVI accepting her check, Wright said.

When the bishop agreed, Kawānanakoa was disappointed. “She was really hoping they would tell her to buzz off,” Wright said.

Meanwhile, she found the Dalai Lama’s refusal to accept her monetary gifts in 2012 pleasing, Wright said: “She was so pleased that somebody actually had some integrity.”

One of her passions was breeding racehorses.

One of her horses, A Classic Dash, won $US1 million in 1993 in New Mexico’s All-American Futurity.

Aside from drawing attention with her racehorses, Kawānanakoa gained notoriety when she sat on an ʻIolani Palace throne for a Life magazine photo shoot in 1998. She damaged some of its fragile threads.

The uproar led to her ouster as president of Friends of ʻIolani Palace, a position she held for more than 25 years.

The battle over control of her trust began when a judge approved her lawyer Wright as a trustee after she suffered a stroke. She claimed she wasn’t impaired, fired Wright as her lawyer and married Veronica Gail Worth, her partner of 20 years.

In 2018, Kawānanakoa attempted to amend her trust to ensure that her wife would receive $US40 million and all her personal property, according to court records.

In 2020, a judge ruled that Kawānanakoa was unable to manage her property and business affairs because she was impaired.

For hearings in the case, her wife would drive them to a handicapped stall near the back entrance of a downtown Honolulu courthouse in a black Rolls Royce.

“My wife? Oh, wifey,” she said in a video interview her publicist released in 2019 to respond to allegations raised in the court case, including how her wife was treating her.

“If it wasn’t for Gail, I wouldn’t be as normal as you see me now,” she said in the video showing her coiffed hair, made-up face and red manicure.

It was “heartbreaking,” she said, to be unable to fulfil her obligation to the Hawaiian people amid legal wrangling over her trust.

“My heritage dictates that I must take care of the Hawaiian people,” she said during one court hearing.