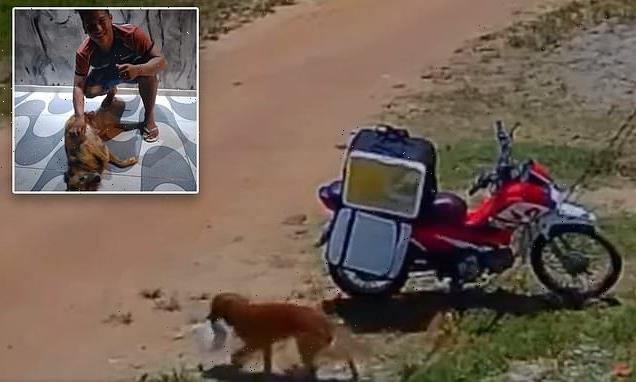 A stray dog may have to pay a hefty fine in animal court after it was caught stealing a delivery man’s lunch bag.

The mischievous, yet hilarious act, was captured on camera while Roseilson Melo was delivering an order to a home in the northern Brazilian state of Pará on Sunday.

The surveillance video showed Melo pulling up to the residence on his bike and the pooch strolling past him.

He removed the food delivery backpack and placed it on top of the seat to take out the lunch bag he was dropping off.

Melo then walked over to ring the doorbell and was chatting with the customer when the backpack tipped to the side, causing a plastic bag to fall out. 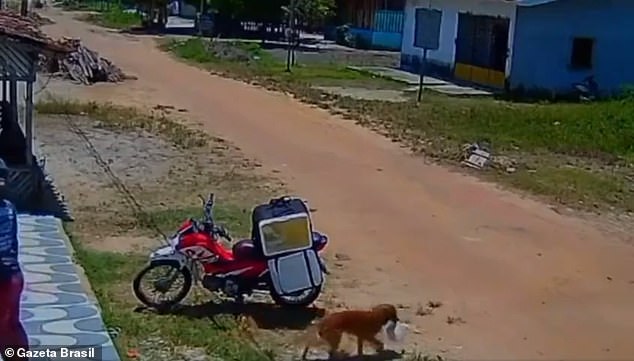 A surveillance camera captured the stray dog walking away with a customer’s lunch bag after it fell out of the backpack that deliveryman Roseilson Melo (left) had placed on top of his motorcycle Sunday in Pará, Brazil 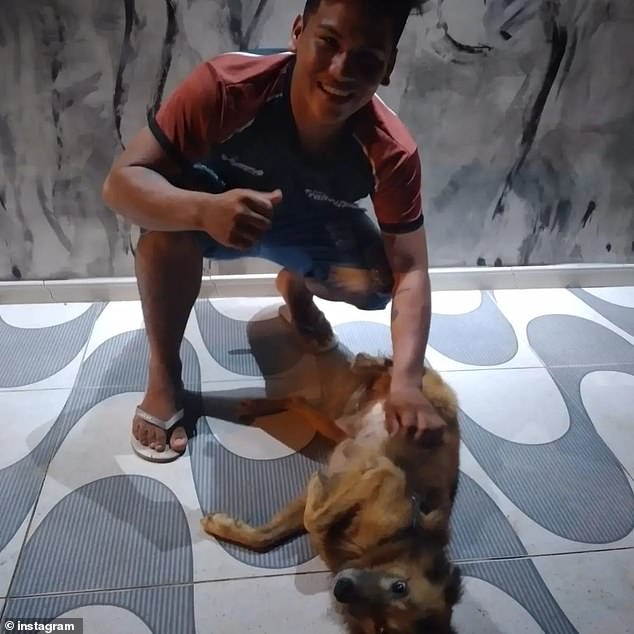 Tharles Costa, who owns Delícias de Francisca restaurant in the northeastern Brazilian state of Pará, was investigating a complaint over a missing order and requested to see the video which revealed the funny moment the stray dog (pictured) picked up a plastic bag containing a customer’s food and walked away with it

Subsequently, the four-legged animal passed by the motorcycle and spotted the plastic lunch bag lying on the ground. The dog picked it with its teeth and trotted across to the other side of the dirt-paved street.

The camera later showed the dog dropping the bag on the grass and sniffing it for a moment.

Apparently, the food smelled good enough that the dog snatched the bag with its teeth and started walking away.

Melo had a baffled reaction as he searched for the customer’s meal, which had been ordered from Delícias de Francisca restaurant, and informed the customer that his bag was missing from the backpack. 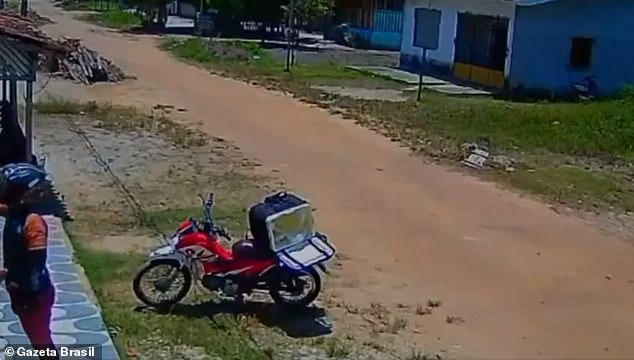 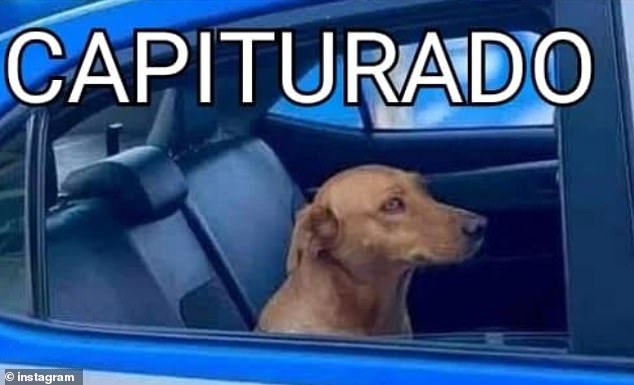 Tharles Costa, who owns Delícias de Francisca restaurant, made fun of the incident by taking a photo of the stray dog sitting inside a police car after discovering a surveillance camera video that showed how the pooch took off with a customer’s order after a lunch bag had fallen out of a delivery man’s backpack

The owner, Tharles Costa, told Brazilian news outlet G1, that they were able to discover the viral robbery after going over the security camera footage.

‘The customer couldn’t believe the food was gone. The delivery guy arrived here bewildered, not knowing what to do,’ Costa said. ‘After all, he didn’t see the dog. We decided to go to the place and ask for the video from the security cameras. That’s when we saw everything what happened. The story went viral.’

Costa shared the video footage on his restaurant’s Instagram account as well as a photo of him posing with the dog and another that showed the pooch sitting inside a police car.

‘The (dog) has already been released and is ready to rob another delivery person in the neighborhoods of Mocajuba (Pará), this is the Brazil we live in,’ he quipped.