Four-bed semi with a surprising secret: Ordinary-looking home in Stockport that has its own heated swimming pool goes on sale for £395,000

An ordinary-looking four-bedroom home in Stockport which has its own heated swimming pool has gone on the market for £365,000.

The house is on one of the town’s biggest housing estates and looks to be a standard 1960s redbrick build from the outside.

It has been described by estate agents as ‘unlike anything else on the market in Stockport’ and is on Brinnington Road in Brinnington. 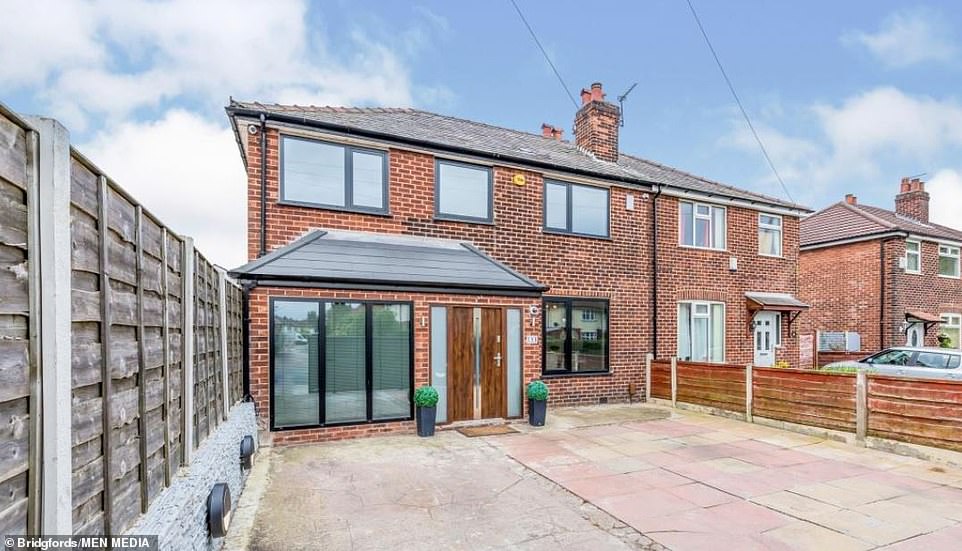 The four-bedroom house on Brinnington Road in Brinnington, Stockport, looks to be a standard 1960s redbrick build from the outside 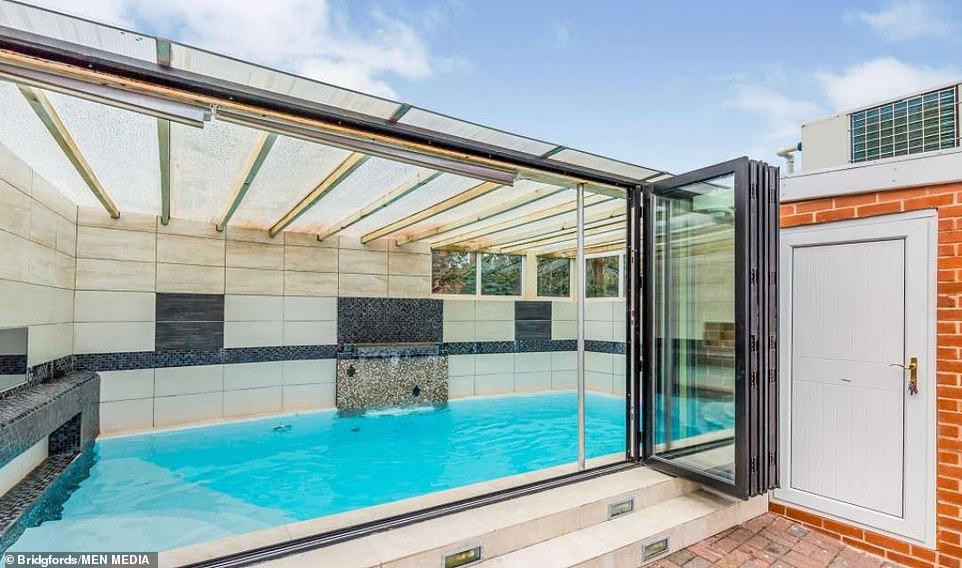 To the rear of the property, there is a triple-glazed pool house and an indoor, heating swimming pool which has a TV and a water feature 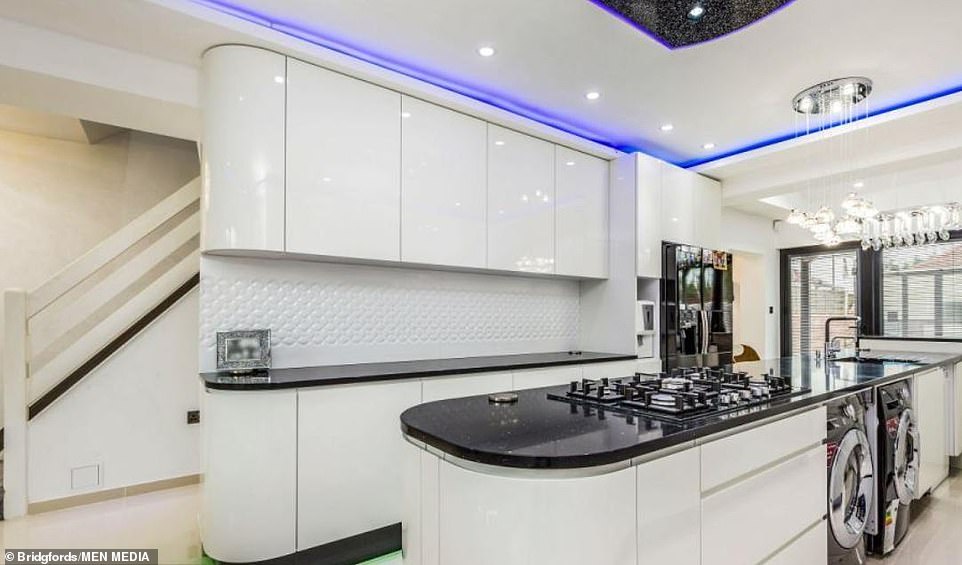 The master bedroom has an en-suite fitted with a rain shower while the separate family bathroom has a six-jet Jacuzzi bath.

The open plan kitchen and diner is decorated white with black accents, with an island and fully integrated appliances and an instant boiling water tap.

The house also has a contemporary lounge and an office on the ground floor. It also has loft space which the current owner uses as a second office. 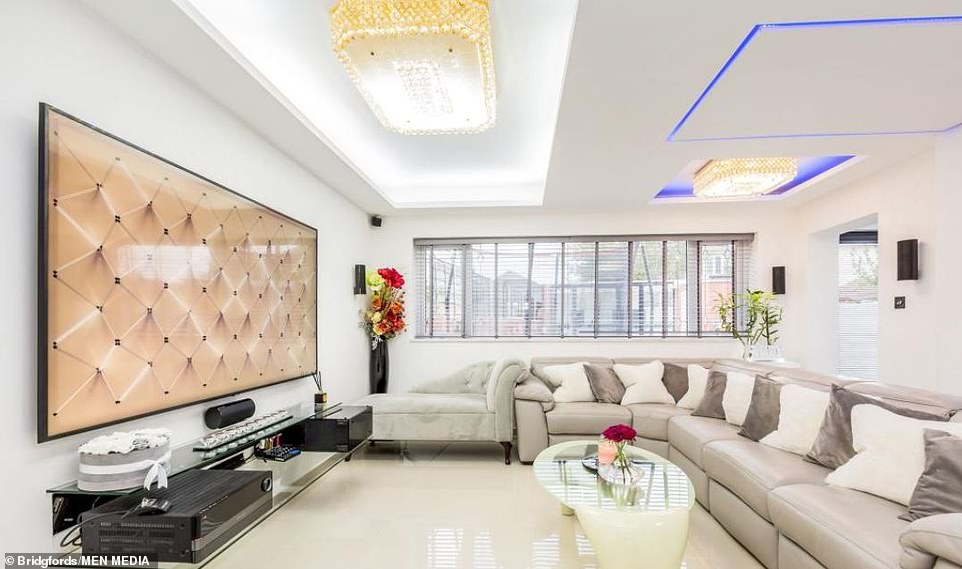 The contemporary lounge has a large sofa and TV, with LED lights and a large window across the back wall 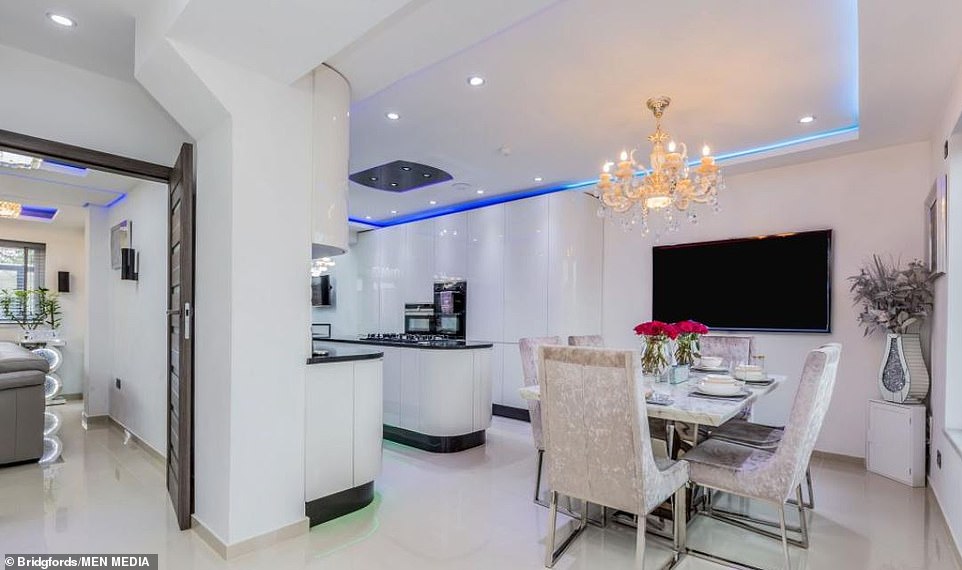 The property is fully wired with the latest technology, including voice-controlled underfloor heating. The lights are also powered by a voice-activated smart system 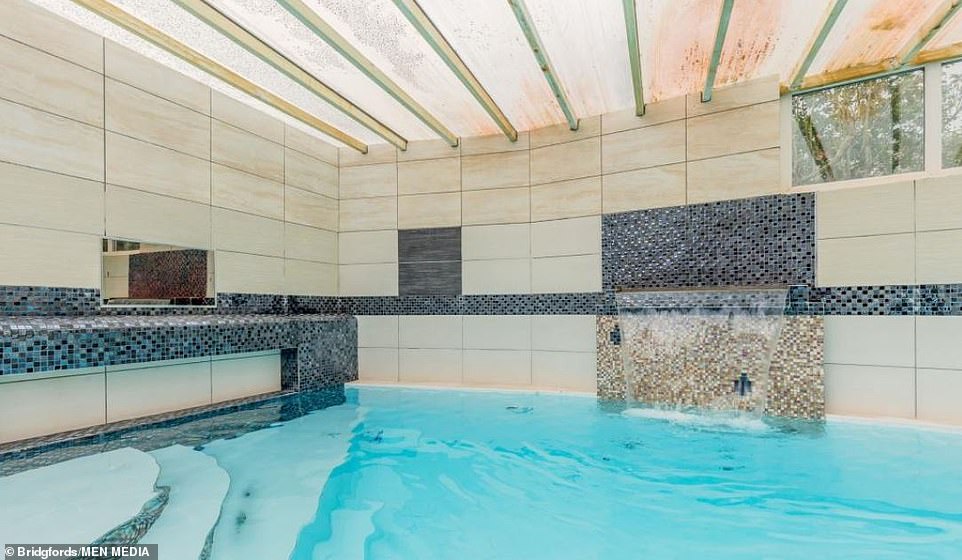 The pool house sits at the end of an enclosed, paved garden and is triple glazed. It has LED lights as well as a waterfall feature

At the front of the property, there are electric gates and a large driveway while an enclosed, paved garden sits at the rear.

Also to the rear of the property, there is a indoor, heated swimming pool in a triple-glazed pool house. It features LED lights, a TV and a waterfall feature.

It is fully wired with all the latest technology, including a 4k resolution home security system monitored by nine cameras and voice-controlled underfloor heating. 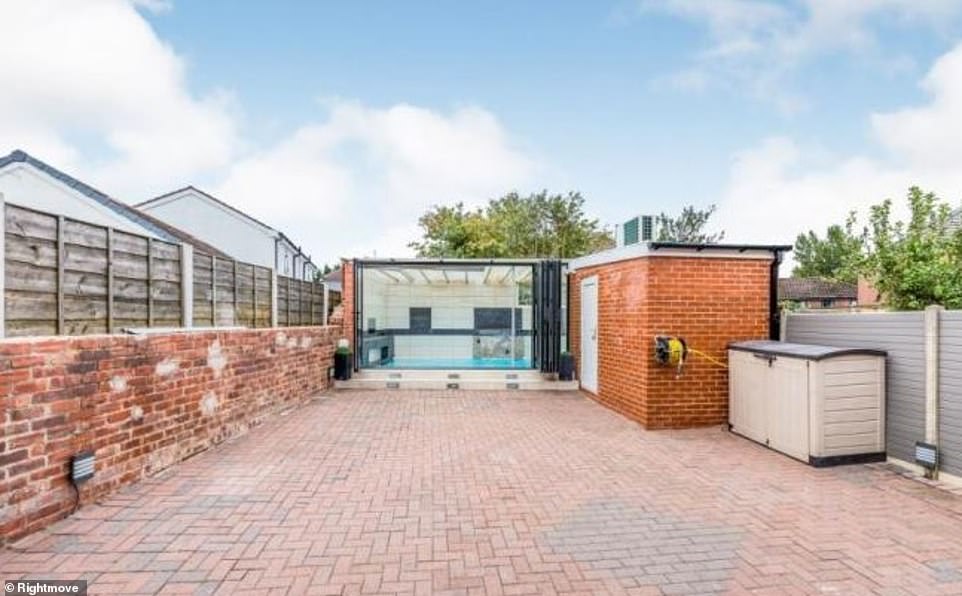 The property has a 4k resolution home security system monitored by nine cameras. Next to the pool house, there is a building which can be used for storage 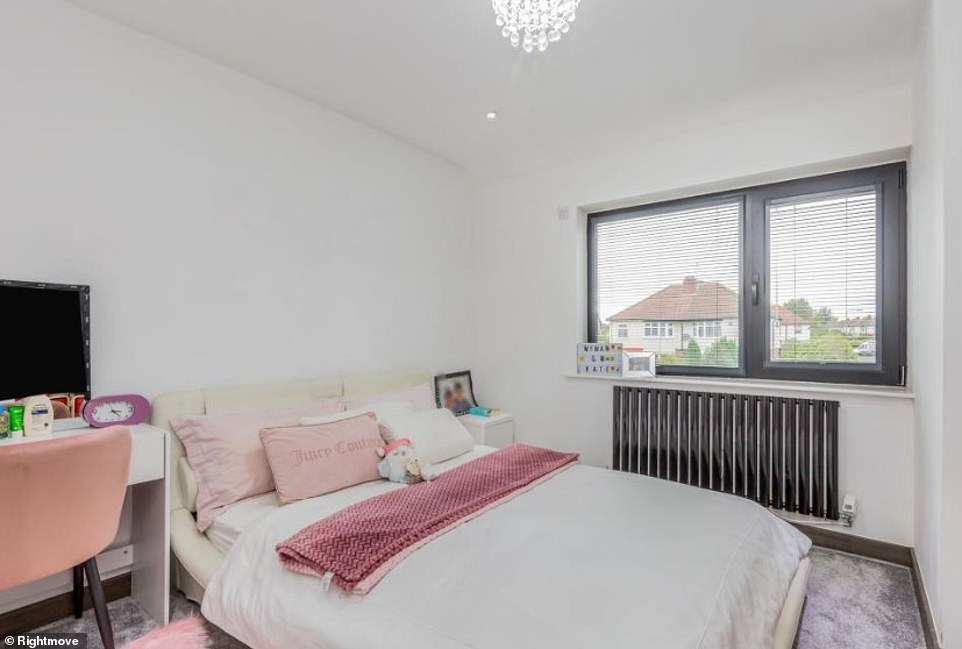 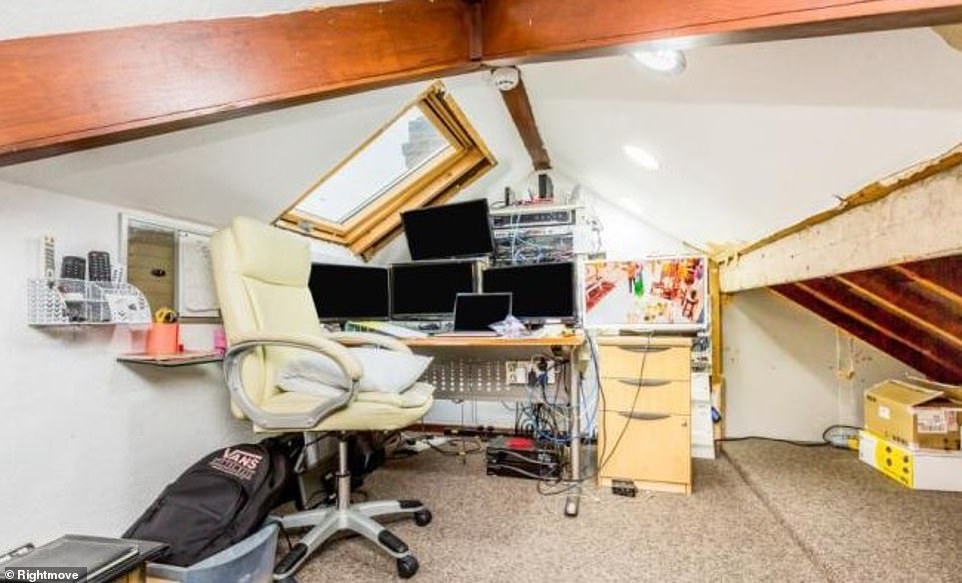 The property’s loft is a working room which the current owner uses as a second office. The property also has an office on the ground floor

The lights are also powered by a voice-activated smart system and each room has its own Ethernet and satellite points.

It is ideally situated just half a mile from Brinnington train station and close to the M60 and has only been on the market since September 29.

A property on the same street sold in March for £175,000, more than half the price of this home which was put on the market by Bridgfords with an asking price of £365,000. 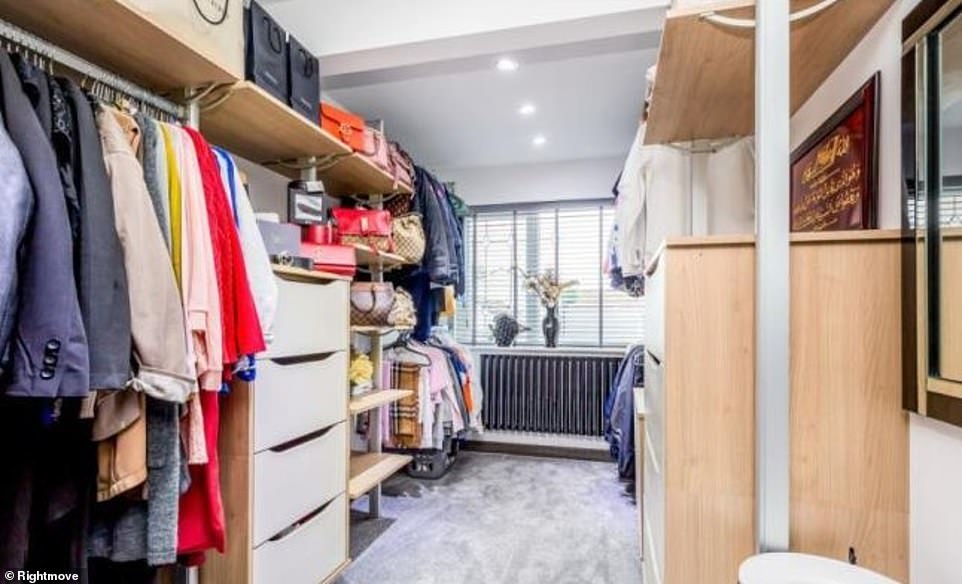 One room is currently used as a wardrobe, with clothes rails and drawers lining the walls for storage 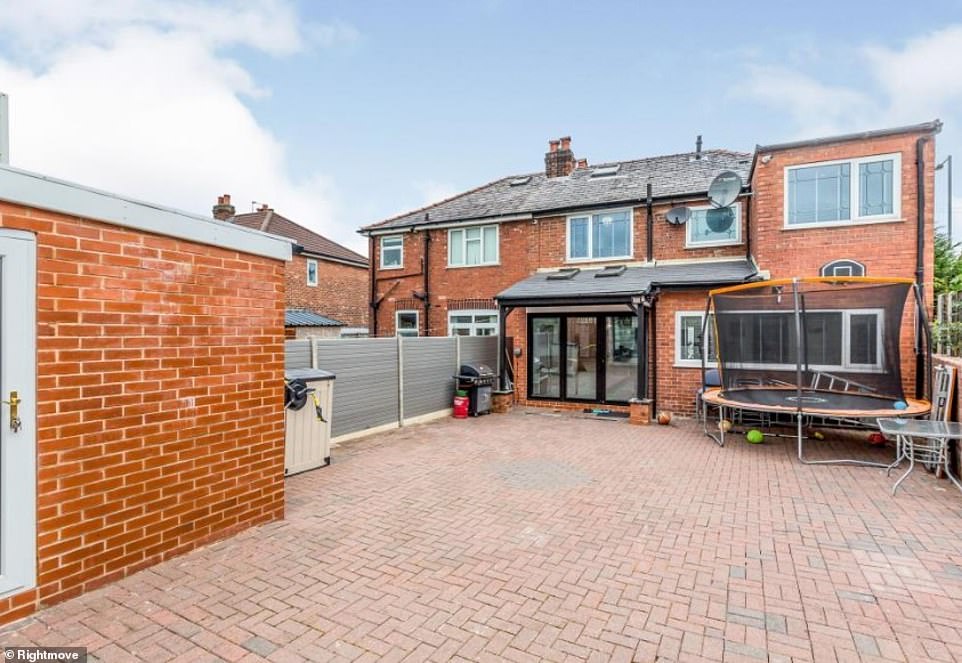 The rear garden is enclosed and paved. There is currently a basketball hoop on the back of the house and a trampoline outside