TIKTOK video captures the moment a cascading ceiling filled with poop erupts – and floods the bathroom of a couple that just moved in four days earlier.

A terrified couple incredulously looks on as the ceiling of their new bathroom caves in and releases some backed-up pressure. 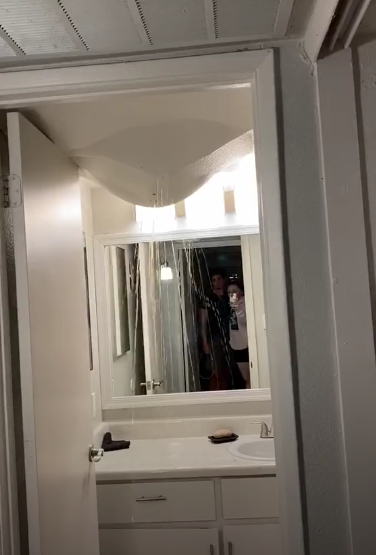 Disgusting TikTok video uploaded by the couple, their reflection barely visible as they inch away from the hemorrhaging bathroom ceiling, comes with the caption "4th day in new apartment. not happy."

The video starts with liquid pooling in the falling ceiling paint as spouts of a brown liquid fall to the floor.

Their stinky situation soon turned to a sticky one when the entire ceiling caved in.

Luckily, the man in the video got to the bottom of problem before the ceiling gave way, and closed the door just seconds before the brown liquid pushed passed the blockaged ceiling. 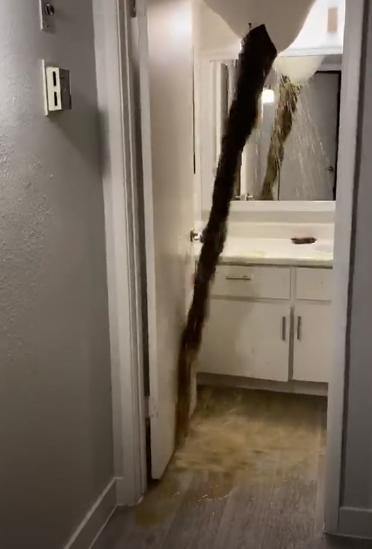 Taking their crappy situation with stride, the couple chose not to be party poopers and set "Wipe It Down" by BMW KENNY as the background song.

Although the couple looked flushed, comments on the video made light of their heavy backflow.

"imagine if that happened while you were brushing your teeth," wrote another.

"or imagine if that happened while you were pooopooo" another user said in response.

Users' jokes were on a roll, but it seems like the couple will need more than one to clean up that mess.