Home that’s had a full service: How a couple saved an ancient barn that used to be a car repair yard

With its wooden beams and panels, it looks like the perfect rustic home. But when owners George and Sue Craggs bought Deben Barn in Suffolk, it was a vehicle repair garage, with a pit, hoist and even an old Mini outside.

‘Immediately outside the barn’s front doors was a huge, beautiful, blue chrome hoist for lifting cars over a pit,’ says George. ‘And there was one car left, a Mini, which we gave to a young lad next door.’

In its many incarnations, Deben Barn, in the village of Debenham, has also been a stable block and an electrician’s workshop. But it started off as part of a farm, and when the Craggs took ownership of it, it came with the 16th Century farmhouse next door where the couple initially lived. 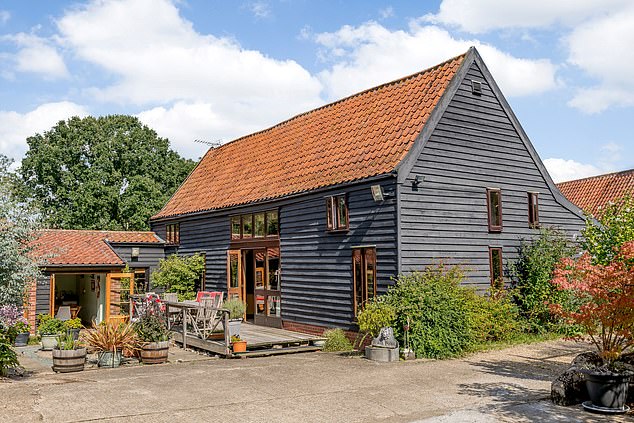 Barnstormer: The former garage in Suffolk. Deben Barn, in the village of Debenham, has also been a stable block and an electrician’s workshop, but it started off as part of a farm

‘During the time we were there, Sue and I converted the barn with the help of a local builder,’ says George, 80. ‘It took 18 months. Then we decided to move into the barn and sell the house.’

George and 76-year-old retired nurse Sue – who started converting the barn in 1997 – were blessed when it came to the building’s structure and beams, as barns often come with small rooms either side of one large central space.

‘We’re very lucky because we’ve got decent rooms either side of the beams,’ says retired jewellery agent George. 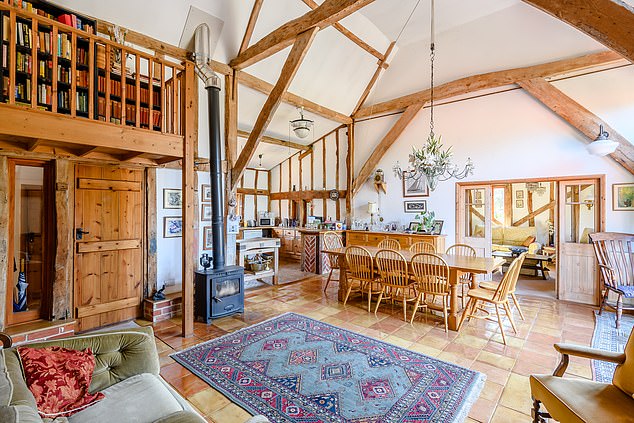 The double-height dining room, pictured. George, 80, and 76-year-old retired nurse Sue were blessed when it came to the building’s structure and beam

Unique features: Converted barn that used to be a vehicle repair garage, a stable block and an electrician’s workshop; four reception rooms and four bathrooms; two-bedroom annexe with shower room.

‘Planning regulations insist that the original beams are shown, and that restricts most barns with tiny rooms on either side. We’ve retained everything of the original structure. The barn dates from 1759, as inscribed on a beam.’

The couple, who are now selling the property, have converted the barn into a two-floor family home with a double-height dining/drawing room with a galleried landing.

There are three more reception rooms, as well as three bedrooms and four bathrooms. There is also a separate two-bedroom annexe with shower room. However, the project did not come without its challenges.

‘The surface of the old farmyard was basically concrete, and making features of the garden was hard,’ says George. ‘Some of the concrete was almost half a yard thick!’

But George and Sue had previous experience of such ventures to fall back on. ‘Both Sue and I over the years have designed and redone houses,’ says George.

‘We’ve messed about with buildings most of our life and enjoyed it. And Sue painted every board in this barn inside and out!’

The couple have four children and eight grandchildren, and their next project is to move to Kent, to be nearer to them.