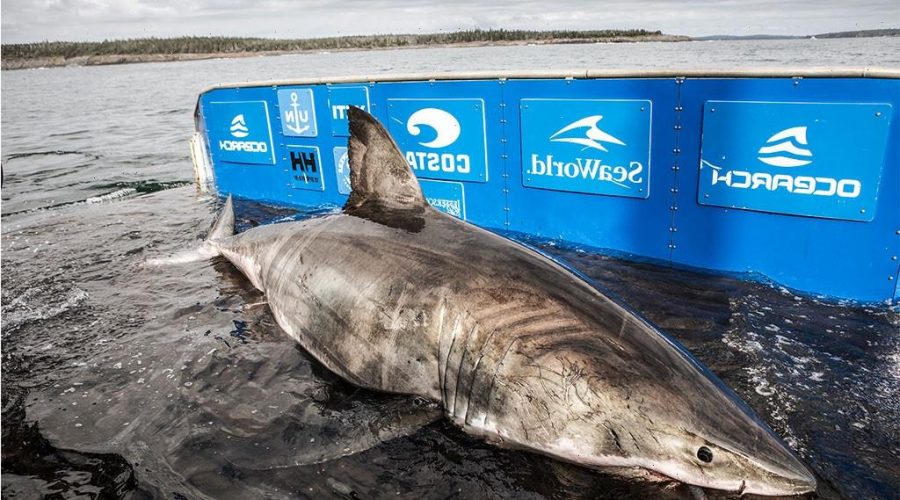 Surfer attacked by great white shark is lucky to be alive: expert

This beach season, every week is Shark Week.

Professional shark taggers warn there are at least four great whites lurking off Long Island and New Jersey en route to Cape Cod  – with a 600-pounder named Rose and a monster 16-foot, 3,456-pounder called Mary Lee right behind them.

“Right now the sharks are loading up on dog fish, seals and blubber over the summer,” said Chris Fischer, the founder of the Ocearch research foundation.

Osearch has tagged 70 sharks, but they represent a tiny portion of the maneaters out there. “There are thousands of them on the East Coast right now,” Fischer, who was in the Florida Keys launching the new Ulysse Nardin Lemon shark diver’s watch said. The numbers will peak in late summer near Cape Cod, and then they will turn around and migrate back to the Carolinas.

As of Friday, tagged sharks in the New York area included Charlotte, an 8-foot, 300-pound juvenile; Martha, a 7- foot, 184-pound juvenile, and Monomoy, a 6-foot, 7-inch juvenile male. Rose, a 10-foot, 5-inch, 600 pound behemoth, is expected to arrive this weekend from Delaware Bay; and Mary Lee, a 16-foot, 3,456-pound monster is lurking off Long Beach Island in New Jersey.

Andromache, a monster 11-foot great white, made a stop in local waters last month and was last detected summering off the coast of Cape Cod. Among the largest sharks Osearch has tagged is Nukumi, a colossal 17.2-foot female great white, who recently returned to Nova Scotia waters after a deep dive swim over the mid-Atlantic ridge.

The shark-curious — and nervous swimmers — can track the massive fish using the Ocearch Global Shark Tracker which shows where tagged sharks were last detected.

Fischer stressed shark attacks are “infrequent,” but he nevertheless he urged common sense in the water, especially for surfers.

“It doesn’t make sense to dress up like a seal and go out in the middle of the food chain,” Fischer said.

Avoid shark feeding grounds by looking for seals or groups of birds diving into the water to feed off shark leftovers.

“The moment you’re 3 feet in the ocean, you’re in the wild, and you’ve taken a risk,” he continued. “It’s the same thing as wandering off into the woods without protection or unprepared during bear season — you might get yourself killed.”