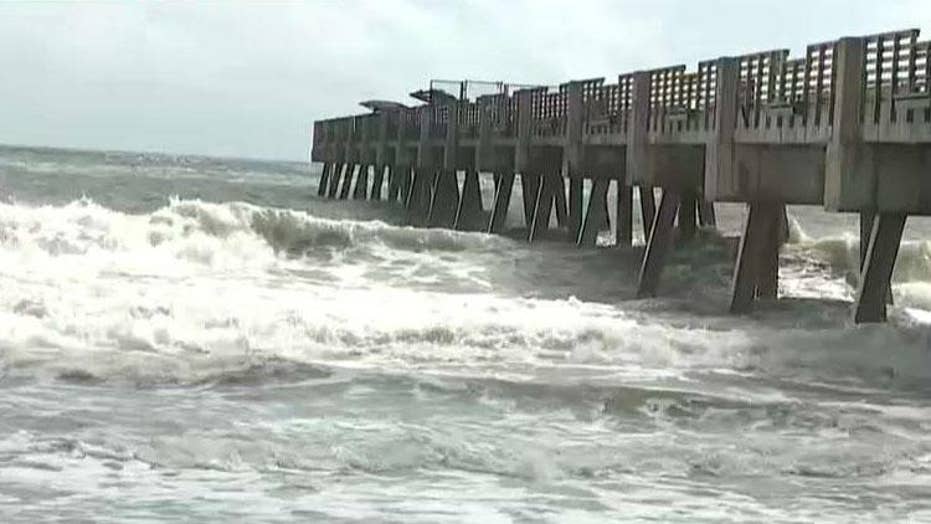 Officials in the Bahamas say they are getting “reports of bodies being seen” Monday as slow-moving Hurricane Dorian continues to wreak havoc on the island nation, forcing first responders and residents to take cover amidst sustained wind gusts of 155 mph.

The Category 4 storm currently is moving across Grand Bahama Island at just 1 mph – and crews hoping to get a better assessment of the “catastrophic damage” reported in regions like the Abacos are still waiting for conditions to clear up, Foreign Minister Darren Henfield told state broadcaster ZNS. 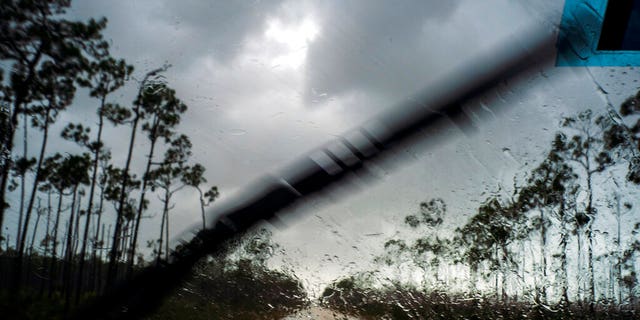 A car returns to the capital under the previous rain before the arrival of Hurricane Dorian in Freeport, Grand Bahama, Bahamas, Sunday Sept. 1, 2019.
(AP)

“We want to say to the citizens here in Abaco, in the impacted area, it is not safe to go outdoors,” Henfield added. “Power lines are down, lamp posts are down, trees are across the street – it is very dangerous to be outdoors if you don’t have to be outdoors. As soon as the weather permits, first responders will go to those areas where we have reports from individuals who were in distress.”

WHAT YOU NEED TO KNOW ABOUT DORIAN'S PATH

The National Hurricane Center downgraded the storm to a Category 4 late Monday morning. As of noon E.T., its eye was located about 25 miles east of Freeport on Grand Bahama Island and 105 miles east of West Palm Beach, Fla.

The NHC says wind gusts of up to 190 mph were reported Monday in Grand Bahama Island, where storm surge is expected to bring water "18 to 23 feet above normal tide levels".

"These hazards will continue over Grand Bahama Island during most of the day, causing extreme destruction on the island" it added.

Over the next day or so, Dorian is expected to make a "slow westward to west-northwestward motion" followed by a "gradual turn toward the northwest and north”, the NHC also says.

"The hurricane will move dangerously close to the Florida east coast tonight through Wednesday evening,” it added, where a number of hurricane warnings and watches remain in effect.

On Sunday, Dorian’s wind gusts in the Bahamas reached speeds of 220 mph – tying the record as the most powerful Atlantic hurricane to make landfall, the Associated Press reported. 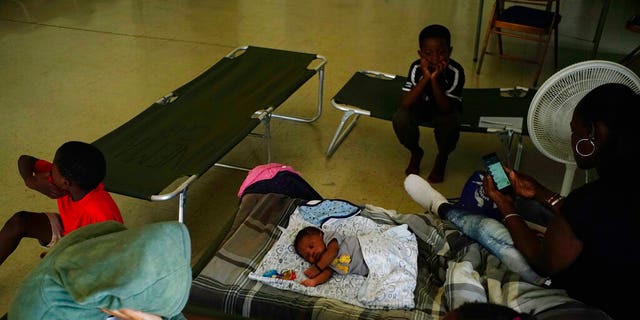 Anastacia Makey, 43, far right, looks at her phone as she and her family sits on cots with other residents inside a church that was opened up as a shelter as they wait out Hurricane Dorian in Freeport on Grand Bahama, Bahamas, Sunday, Sept. 1, 2019. Hurricane Dorian intensified yet again Sunday as it closed in on the northern Bahamas, threatening to batter islands with Category 5-strength winds, pounding waves and torrential rain.
(AP)

Residents there desperate to find out about the status of their loved ones were calling into a ZNS live broadcast Monday, asking the anchors for any information they have heard.

The Eyewitness News station in the Bahamas interviewed a grandmother late Sunday who told them her 8-year-old grandson had died in the Abacos, possibly from drowning.

Videos posted on social media showed cars in the Bahamas submerged in water, homes with roofs torn off and communities inundated with storm surge.

The Associated Press also cited a spokesperson from Bahamas Power and Light as saying that the entire island of New Providence – the country’s most populous and home to the tourist destination of Nassau – was without power and their office in the hard-hit Abacos was torn apart.

But despite the damage, Henfield told ZNS that the citizens of the Bahamas and its government are “holding strong.

“We ask you to continue to pray for us,” he said.