Zay Canters has come out twice to their parents – first as a lesbian at 23 and five years later as gender fluid.

“I didn’t even know when I came out as a lesbian that non-binary was a thing or that gender fluid existed,” says Zay, 32. 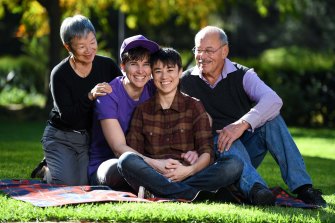 Non-binary is an umbrella term for gender identities that are neither male nor female‍. A gender-fluid person is someone who doesn’t identify with one gender, or their gender may shift over time. Zay uses the gender-neutral pronouns they/them and the honorific Mx, pronounced micks.

Zay’s father, Bill Canters, says it was a relief when Zay told him and mother Clara.

“One of the things that bothered me was that we couldn’t ever get close to Zay. They just wouldn’t open up … there was always this wall, this barrier we couldn’t get through.”

The Canters family is part of a campaign by Respect Victoria, an organisation dedicated to the prevention of family violence, that calls on Victorians to support LGBTIQ+ family members.

Respect Victoria says LGBTIQ+ communities can face specific forms of family violence or discrimination including rejection from family, purposely misgendering or dead-naming a person (using a person’s former name without their consent), refusing access to gender-affirming medication, and faith or religious-motivated abuse.

The campaign highlights stories from families in Victoria who have faced challenges along the way but have chosen to love, respect and support each other.

Zay and their partner, Bowie Stover, run Fearless Movement Collective, a queer and trans-friendly fitness training business that operates out of a studio in the basement of Bill and Clara’s home in Ringwood East. “We probably wouldn’t have been able to get to where we are today if it weren’t for Mum and Dad supporting us, converting downstairs into a place where we could live and a studio where we can train our clients,” Zay says.

The Respect Victoria campaign, “Pride, Respect, Equality”, has run on metropolitan and regional television, radio and press, plus digital and social media. It has also run in Italian, Greek, Hindi and Punjabi on radio.

“I love my children to death because I’m your dad and your gender and sexual identity makes absolutely no difference to me,” Bill tells Zay in a short film that forms part of the campaign.

Bill laughs when asked by The Age if learning about gender diversity has been a steep curve. “Absolutely. At our age, what do you think? We are in our 70s.”

Bill and Clara still ask a lot of questions.

“All this time, we thought there was only homosexuals and lesbians. That was it. There was no in-between,” Clara says.

During our interview, Bill asks the couple if gender fluidity is a transitional phase you go through until you decide how you want to identify.

“It’s its own identity, there’s no phase, there’s no choosing to identify one way or the other,” Bowie explains. “No one chooses, they are just how they are. For some people, their expression of self over time will shift.”

Zay recalls being convinced they were in the wrong body when they were 10 or 11.

“I didn’t talk to anybody about it. When I was a kid, I never saw any representation of trans or gender-diverse people. I just thought that there was something wrong with me. And I thought that I shouldn’t be thinking about it even or God would find out.”

Once, Zay was on the brink of telling their parents they were a boy but at the last minute decided to forget about it. And then puberty hit. “I came to the realisation that, OK, I am definitely a girl and that is not going to change.” 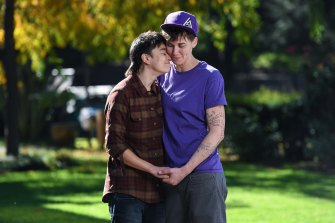 It was not until Zay got together with Bowie, who is also gender diverse, in 2016 that their conversations triggered memories of Zay thinking they were a boy in their childhood.

“I think I was confused when I was a kid because in that moment when I was thinking, ‘Do I tell Mum and Dad?’ the other thought that I had was, ‘What if I change my mind?’ So that’s why I didn’t say anything about it.”

Clara’s first thought when Zay came out was: “Oh no, I am not going to have grandchildren. I was also concerned about their future,” she adds.

Bill was happy to have an answer to some of the behaviour he and his wife hadn’t understood, including that Zay had never had a boyfriend.

But he too worried they wouldn’t have an easy life.

The couple have educated themselves about gender diversity but still struggle with gender pronouns. “We try but we never get it 100 per cent right,” Bill says.

Zay says they know their parents are not trying to be disrespectful. “Whether they gender me correctly or incorrectly is not a reflection of how much they love me and care about me.”

Clara is a member of the Baptist Church. She says she struggles to balance the views of her church with her support for same-sex marriage and Victoria’s ban on gay conversion therapy, which makes it illegal to try to change someone’s sexual orientation or gender identity.

“Having a child who belongs to the LGBTIQ+ community has presented me with many challenges and questions. Among the most difficult is my faith and the role God plays in all of this,” she says.

“Some were moved by the sincerity shown in the video and congratulated us for participating in this important campaign, and others just kept quiet,” she says.

“I suspect the ones who kept quiet may have felt a sense of despair for us, having a gay child.”

Bill says the feedback he has received from the family’s involvement in the campaign has been positive, with several members of his golf club telling him they saw the short film on SBS.

Equality Australia CEO Anna Brown says the campaign – funded by the Victorian government – was a response to the Royal Commission into Family Violence, which recommended targeted education campaigns and services for the LGBTIQ+ community.

“This groundbreaking campaign shows us what that acceptance and validation at home can look like, and just how positive an impact it can have on a young person’s life,” Ms Brown says.

The Victorian government also allocated $45.4 million in the budget to support LGBTIQ+ Victorians, including more than $21 million for the Royal Children’s Hospital and Monash Health’s gender clinics, to support the mental health of trans and gender-diverse young people.

“Since appointing a Minister for Equality, Martin Foley, in 2014, Victoria has developed dedicated services and programs to meet the needs of LGBTIQ+ communities and introduced crucial reform such as banning harmful conversion practices,” Ms Brown says.

“We hope that other governments will follow suit, to ensure that all Australians are supported and celebrated, no matter who they are or whom they love.”

Zay and Bowie have lived with Bill and Clara for five years.

“We’ve had some bumps along the way – you’ll have that in any family living together – but in the main, it’s worked very well,” Bill says. “If our relationship and the way it’s worked out for us is publicised and that helps other families, then I’m all for that.”

24/05/2021 World News Comments Off on ‘I love my children to death’: Campaign celebrates Victorians who support LGBTIQ+ relatives
Lifestyle