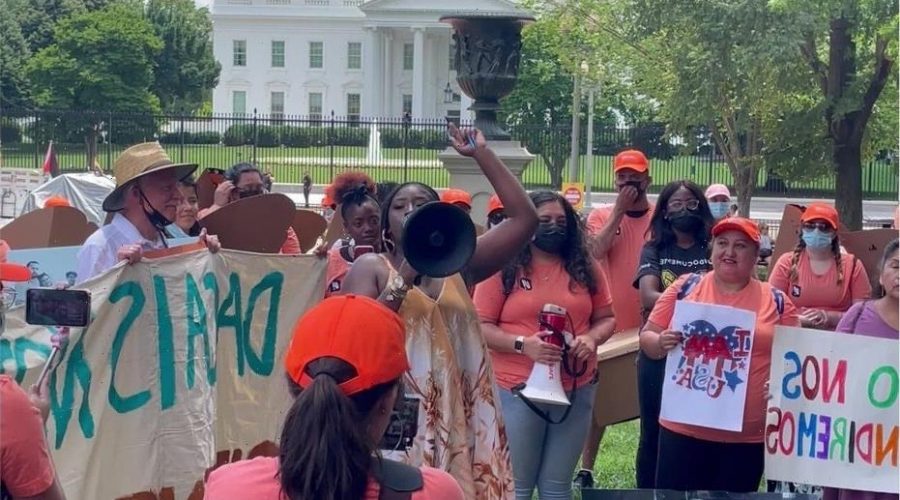 Hundreds rally to demand a pathway to citizenship for undocumented immigrants

On the 9th anniversary of DACA, protestors gathered in Lafayette Square to slam the Biden Administration for inaction on immigration

Over 200 protesters gathered Tuesday afternoon in Lafayette Square across from the White House to demand a pathway to citizenship, also known as amnesty, for the millions of illegal immigrants living in the United States.

Throughout the afternoon rally-goers could be heard across the park shouting chants in both Spanish and English such as “No papers, no fear!” and “What do we want? Citizenship. When do we want it? Now!”

“DACA is the floor, we want a pathway to citizenship,” shouted a young man holding a clipboard who appeared to be emceeing the event, which was hosted by immigrant advocacy group United We Dream.

The same man announced, with police within earshot, that he was living in the United States illegally.

“My whole life I lived in the shadows, not only as an undocumented man, but also as a queer man,” he said.

A woman who identified herself as Joella Roberts told the crowd she was living in the United States “undocumented and unafraid.”

“My name is Joella Roberts. I use she/her pronouns. I was born in Trinidad and Tobago. I am undocumented and unafraid!” shouted Roberts.

The protesters, whose ultimate goal is citizenship for millions of undocumented immigrants, directed much of their ire at President Biden and Vice President Kamala Harris, who they say lied to them.

“President Biden promised to take action within the first 100 days of being elected,” said the man emceeing the event. “What a change of tone, right? When it was just [this] past week when we heard Vice President Kamala Harris say, ‘Do not come. Do not come.’”

Roberts was even more direct, saying Harris “lied” to the immigrant community. “Kamala Harris lied and said she would help us,” shouted Roberts from a megaphone.

“ICE and CBP are the largest funded police agencies in this country,” Roberts said to the crowd, which then responded with “”Shame! Shame! Shame!”

Despite being in the country illegally and not being eligible to vote, Roberts shouted toward the White House in a symbolic gesture to Biden that it was undocumented immigrants who put him in office and that he is “accountable” to them.