Hospitality workers are being offered sign-on bonuses of up to $1000 in a food and drink prices.

The competition is particularly hot in Victoria where venues are reopening after months of lockdown to find a workforce raided by other states and absent of backpackers and skilled visa holders, who were told early in the pandemic to return home and denied access to JobSeeker or JobKeeper payments.

Victorian president of the Australian Hotels Association, David Canny, said the shortage extended from unskilled roles such as dishwashers through to head chefs, and it meant some venues were unable to reopen or were closing for days just to give overworked staff a break. 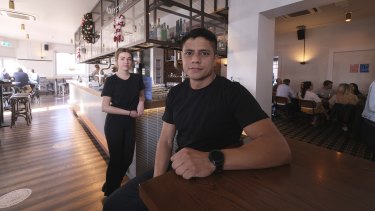 Ruben Rodriquez and Maddie Harvey found it near impossible to find work during the pandemic. Then the pubs opened. Credit:Luis Ascui

Mr Canny described it as the No.1 issue among his membership, which contributes more than $4 billion each year to the state economy, and called on the federal government to begin allowing people on JobSeeker to work shifts in hospitality without their payments diminishing.

"That would incentivise people to get off the couch and come do their 15 or 20 hours a week," he said.

"It’s that top-up staff that no one can seem to find …. which would normally be from that pool of international backpackers and students, and we don’t have any."

As stir-crazy Melburnians rush back to venues and restrictions continue to ease, Mr Canny said industry figures had estimated the demand for staff, particularly chefs and middle management, could drive up some wages by as much as 20 per cent.

"In desperate times, you do desperate things," Mr Canny said. "Some operators will see overpaying as a way of survival, getting through, filling rosters and being able to give people time off.

"Venues wouldn’t be able to absorb that [cost]… you could see prices forced up, absolutely."

Australian Venue Co., which operates more than 150 bars around Australia, has for the first time begun offering sign-on bonuses on a sliding scale up to $1000 in an effort to attract skilled workers.

"There’s only a couple fish swimming around in what is a pretty big pond at the minute," general manager of human resources Rachel Checinski said.

"It was an easy decision because we could lose a lot more by not doing it. It’s a small price to pay for actually being able to open and have the revenue."

Ms Checinski said about a quarter of staff before the pandemic were visa holders. In the absence of JobKeeper, the company has paid more than 60 of these workers from its own pocket to keep them in the country in anticipation of reopening.

A nationwide survey of members from the Restaurant and Catering Industry Association this year showed chefs were the most difficult positions to fill.

Only one in 10 businesses found hiring staff easier this year compared to last year, despite the higher unemployment rate.

"The international labour that restaurants rely on so heavily, probably more so than pubs and clubs, just isn’t there, especially for skilled workers," he said.

Figures provided to The Sunday Age and Sun-Herald by Deloitte Access Economics showed Victoria's hospitality industry employed about 54,000 people, including those on JobKeeper, to September this year. This is down on the 76,000 employed in 2019.

University of Melbourne professor of economics Jeff Borland said the worker shortage would put upward pressure on wages. "And that may not be a bad thing because you’ve got to remember we’ve been through four or five years where we’ve seen a series of major cases of underpayment of workers in accommodation and hospitality, which I think is to do with the fact there has been this big and available supply of workers to employers," Professor Borland said.

According to the Deloitte data, Victoria's hospitality worker shortage is more acute than in the other states and territories.

Job ads for hospitality staff are rising sharply and accounted for more then 2.6 per cent of the total Victorian jobs advertised in October, when onerous restrictions were still in place.

The averaged-out figure for the rest of Australia, where fewer restrictions were in place, was about 2.2 per cent.

The state's fruit and vegetable industry, which leans on foreign workers for picking and packing, is facing a similar labour crisis. The Victorian government has launched an advertising campaign targeting school leavers, international students, migrant communities and "grey nomads" to spend the summer working on farms.

Mr Canny of the AHA said his industry was talking to multiple levels of government about ways to attract people to hospitality. This included opening up faster and easier pathways to permanent residency, he said.

But with international travel off the menu for the foreseeable future, and thousands of Australians on waiting lists to get home, it could be some time before the hospitality sector gets the workers it needs.

"We’re in survival mode," Mr Canny said. "There is still the possibility of them coming in and doing the 14-day quarantine program. We’d like to see that happen sooner rather than later."

Ruben Rodriguez and Maddie Harvey have been working at Harlow bar, Richmond, since graduating from a three-day course about a month ago.

Ms Harvey, 19, who is studying arts at university, had been out of work since finishing high school. Mr Rodriguez, 31, with a degree in computer science, had also found getting a job during the pandemic near impossible.

"I was sitting at my local and the owners there said it was really difficult to find workers because the backpackers aren’t here. When they said that, I thought about getting my RSA [Responsible Service of Alcohol certificate]. Then it was all pretty quick," Mr Rodriguez said.

While they only started weeks ago at the Richmond bar, there are already at least five employees newer than they are.