Incredible images show climate activists storming German coal mine, chaining themselves to railway tracks and clashing with police as they demand an end to fossil fuels

Hundreds of activists broke into a German coal mine at the weekend to demand the country end its reliance on fossil fuels.

The occupation at Garzweiler was among several demonstrations near the mine and adjacent power plants that attracted thousands of people to the village of Hochneukirch and surrounding Rhineland areas on Saturday.

Some demonstrators chained themselves to train tracks leading to the mine while others broke through a police cordon and got into the pit itself. 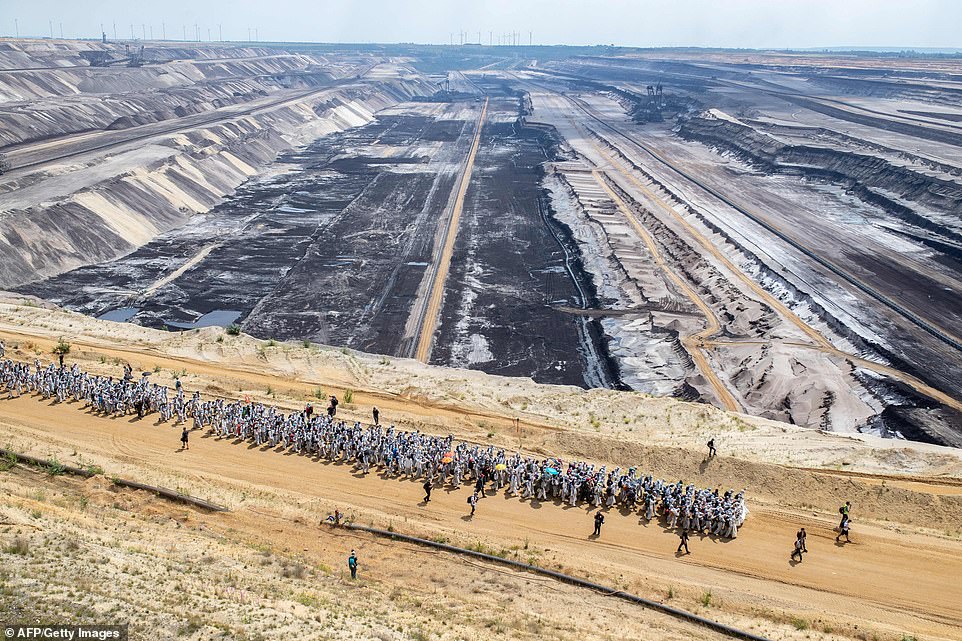 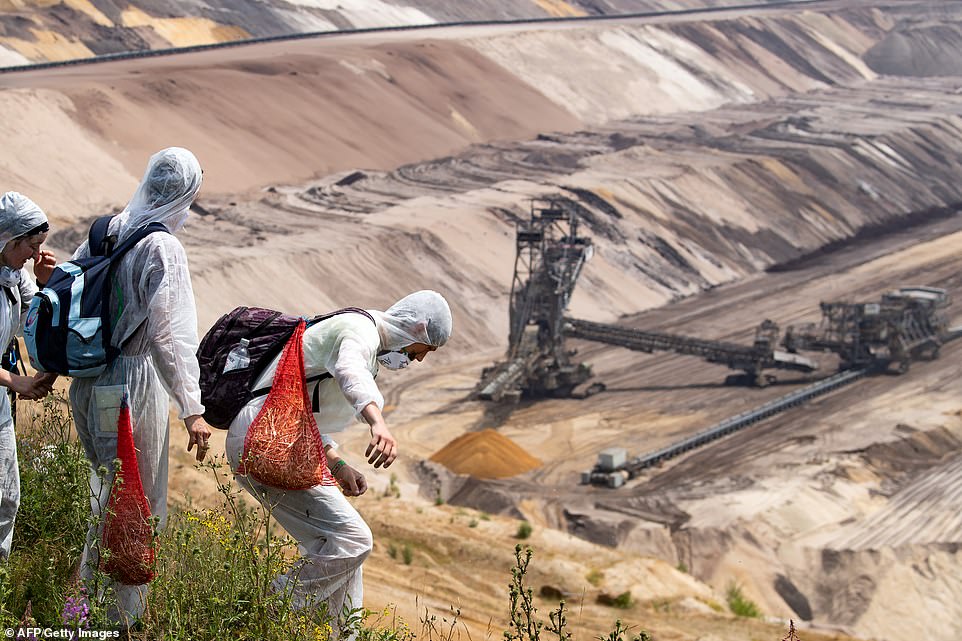 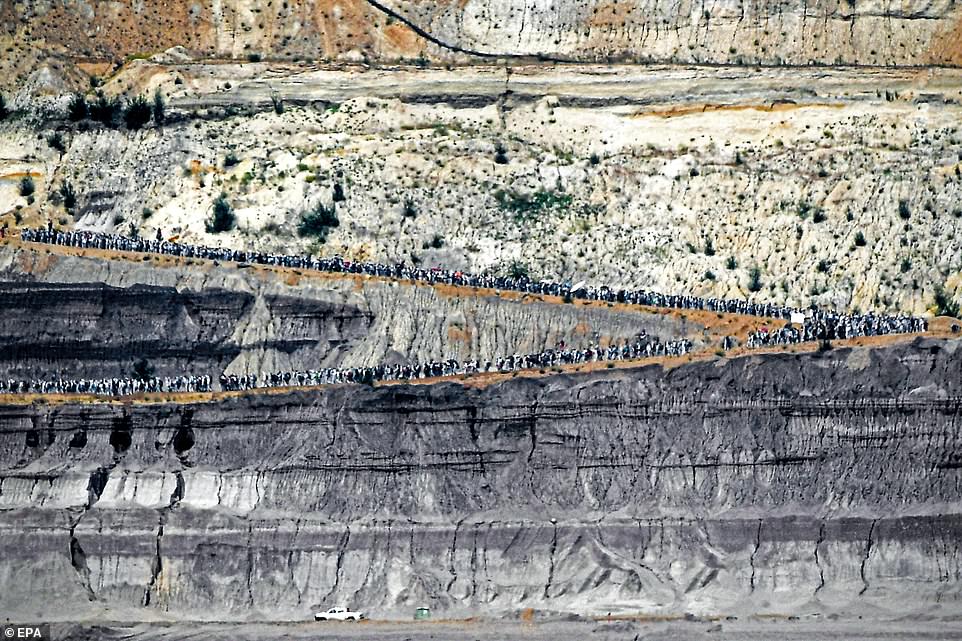 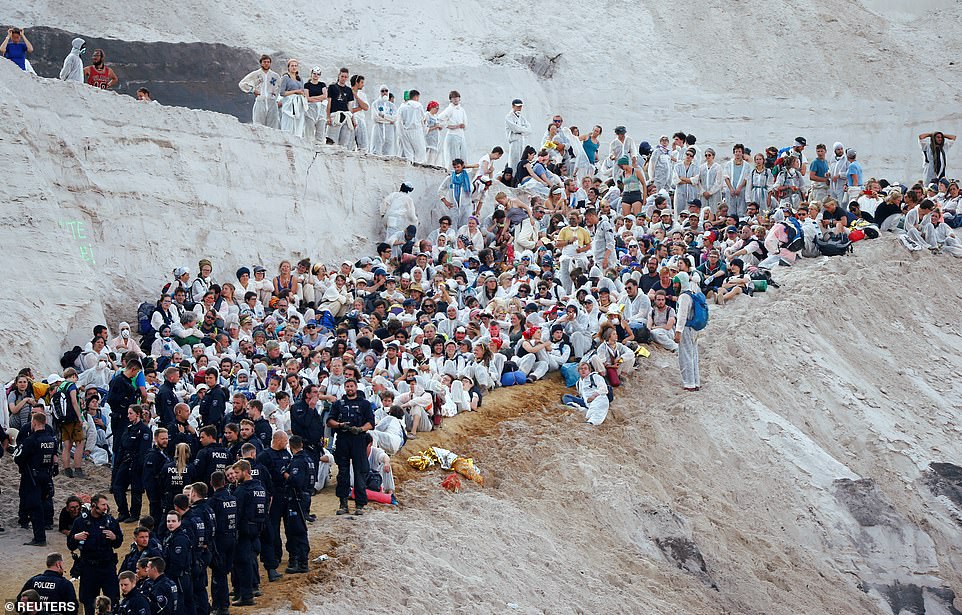 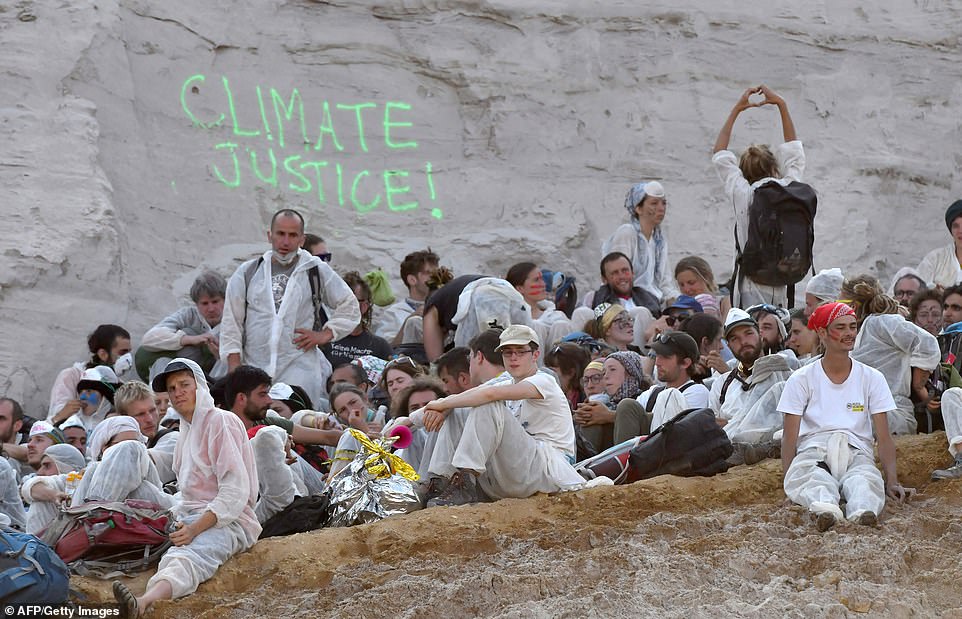 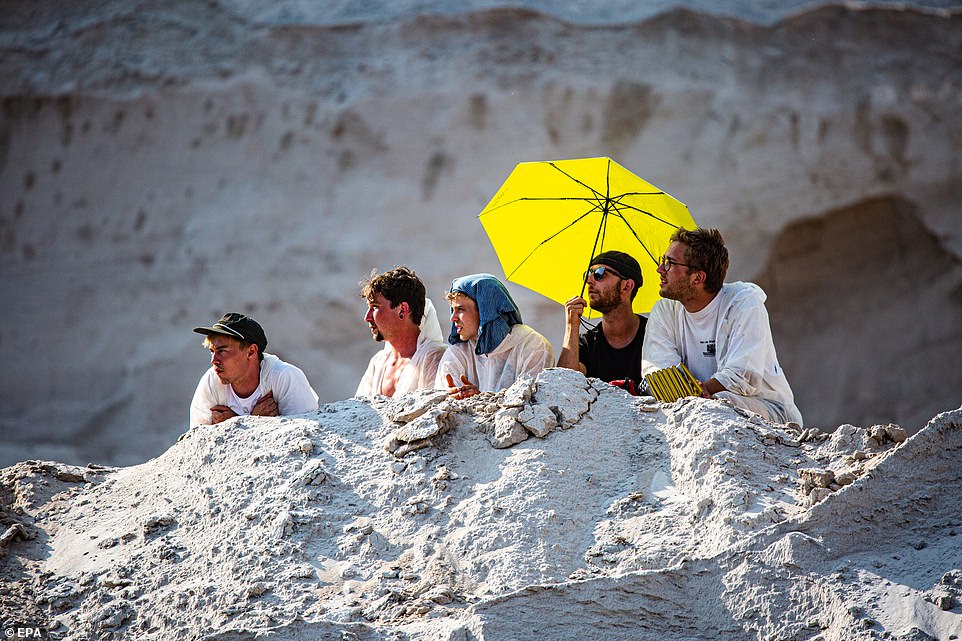 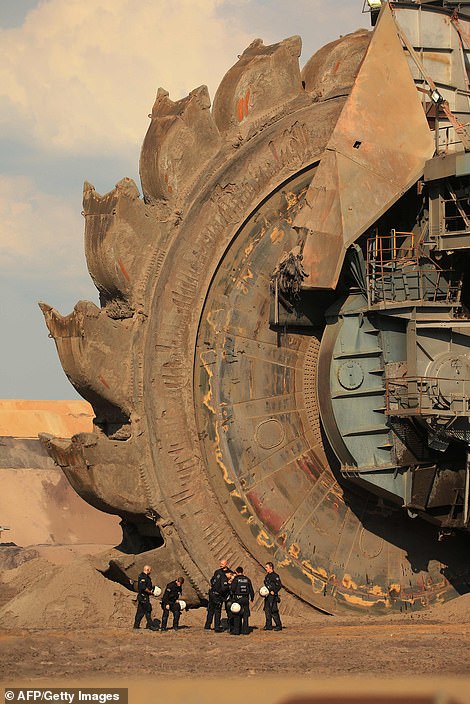 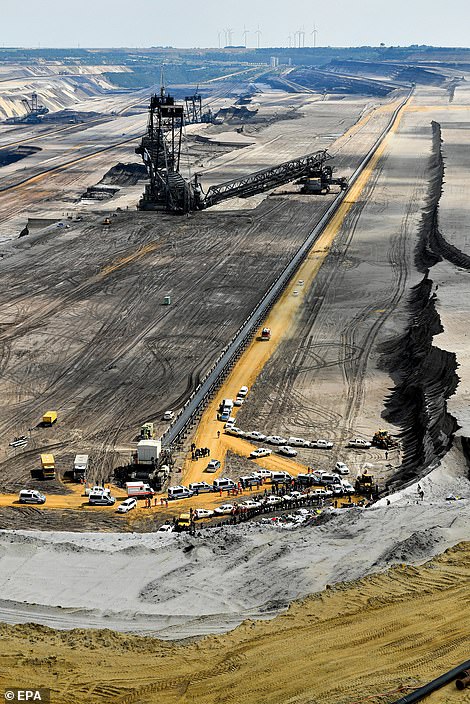 Clashes then broke out between activists and officers, with eight police injured in scuffles, authorities said.

German news agency dpa reported that activists claimed police had denied water and food to those who were temporarily detained. Police denied the allegation.

On Sunday officers moved in with bolt cutters to remove those chained to rail lines, while protesters in the pit were loaded on to buses and driven away.

Activist group End of Story, which had led the protests, put out a statement saying: ‘We wrote climate history this weekend.

The occupation came after 40,000 students gathered to protest in the city of Aachen on Friday to demand faster action to tackle climate change.

The long-planned protests came just hours after European Union leaders failed at a summit to agree on how to make the EU carbon neutral by 2050. 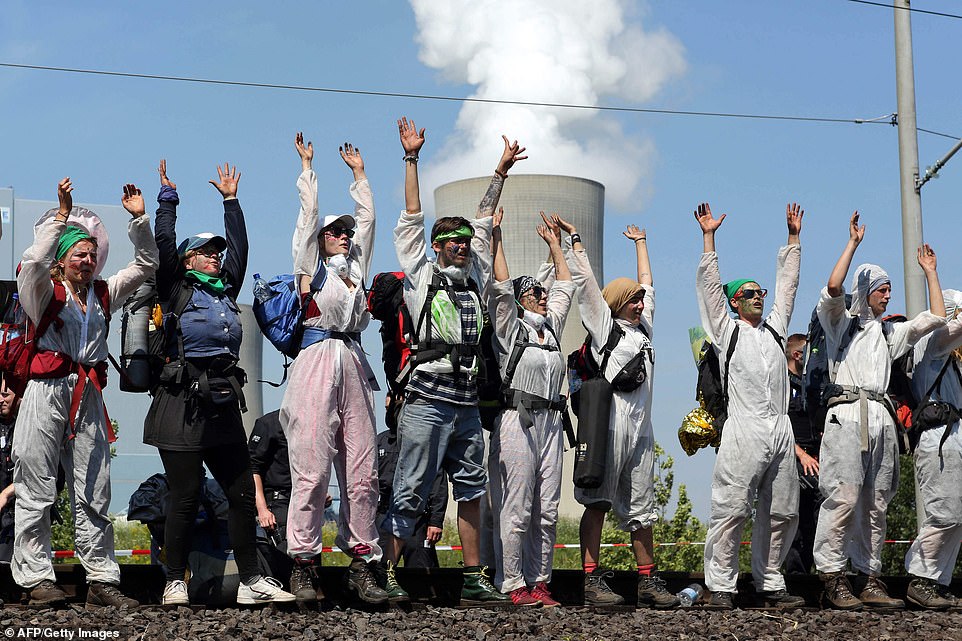 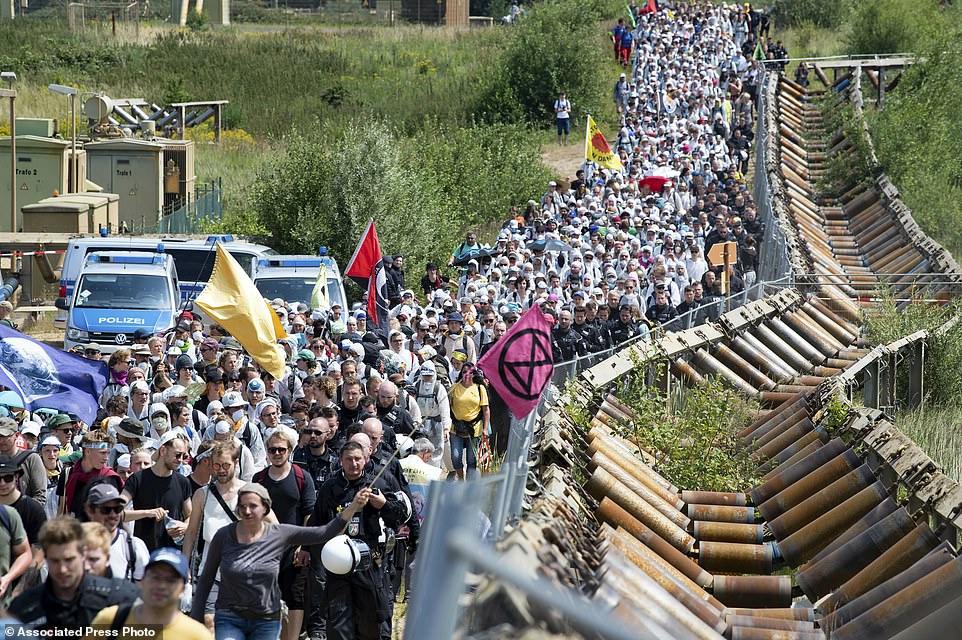 Numerous environmental activists walk on a roadway on the site of the Garzweiler open-cast mine in Garzweiler, Germany, Saturday, June 22, 2019. The protests for more climate protection in the Rhineland continue. (Marcel Kusch/dpa via AP) 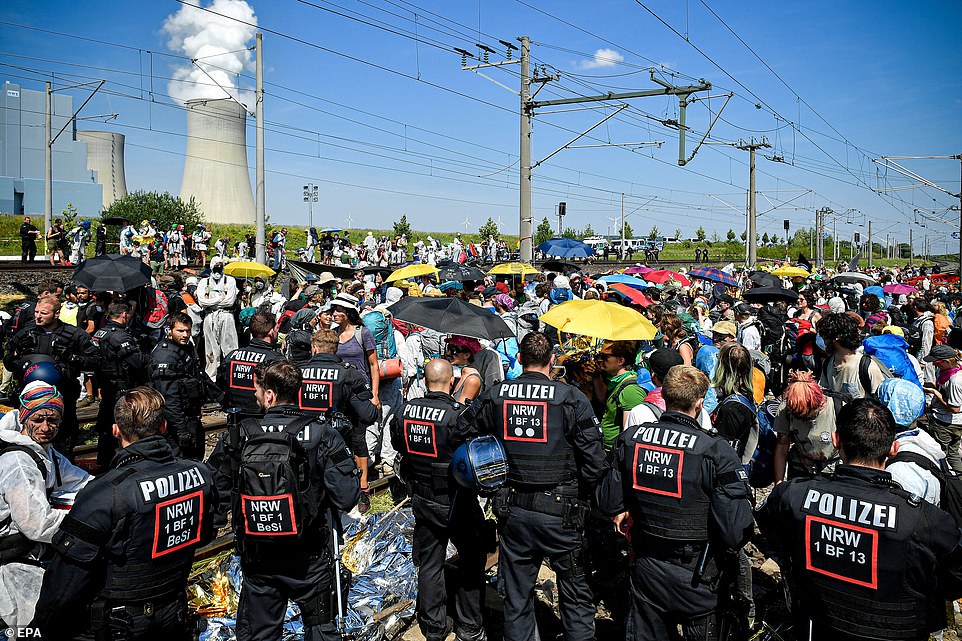 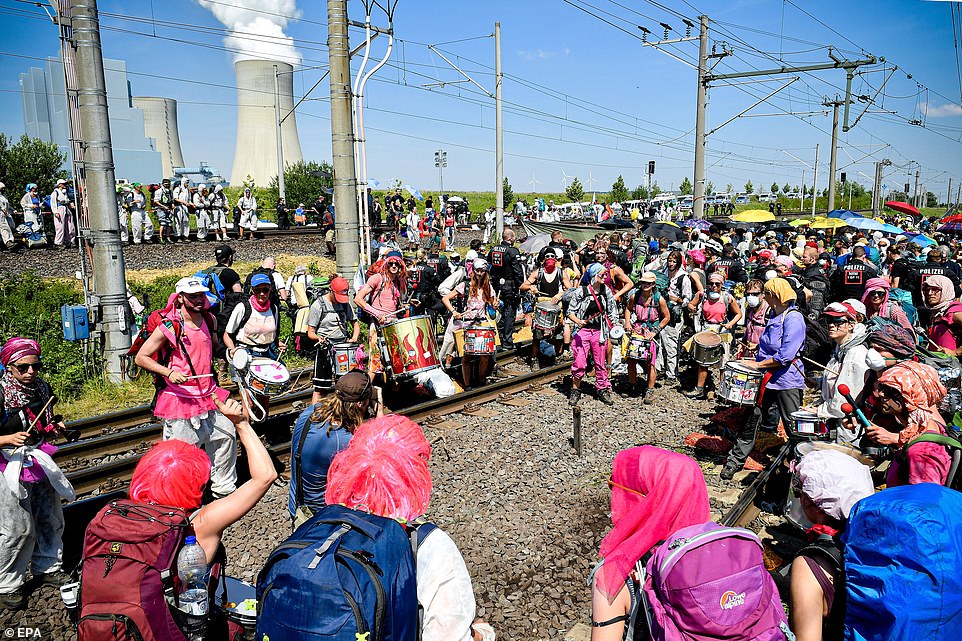 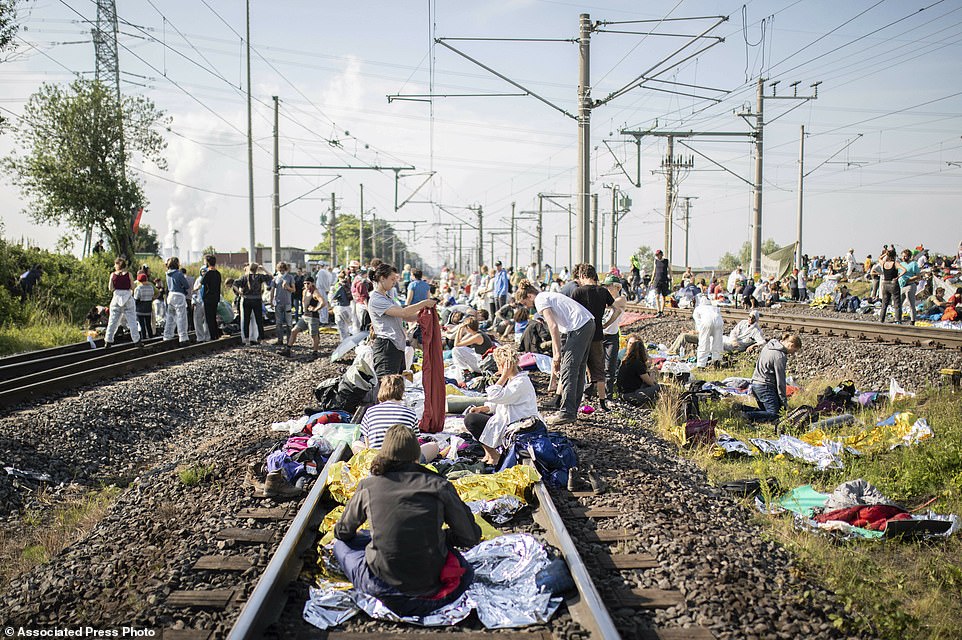 Numerous environmental activists block the tracks of the coal transport railway in Rommerskirchen, Germany, Saturday, June 22, 2019. The protests for more climate protection in the Rhineland continue. Many participants are expected for protests and actions at the Garzweiler opencast mine. Photo by: (Marcel Kusch/dpa via AP) 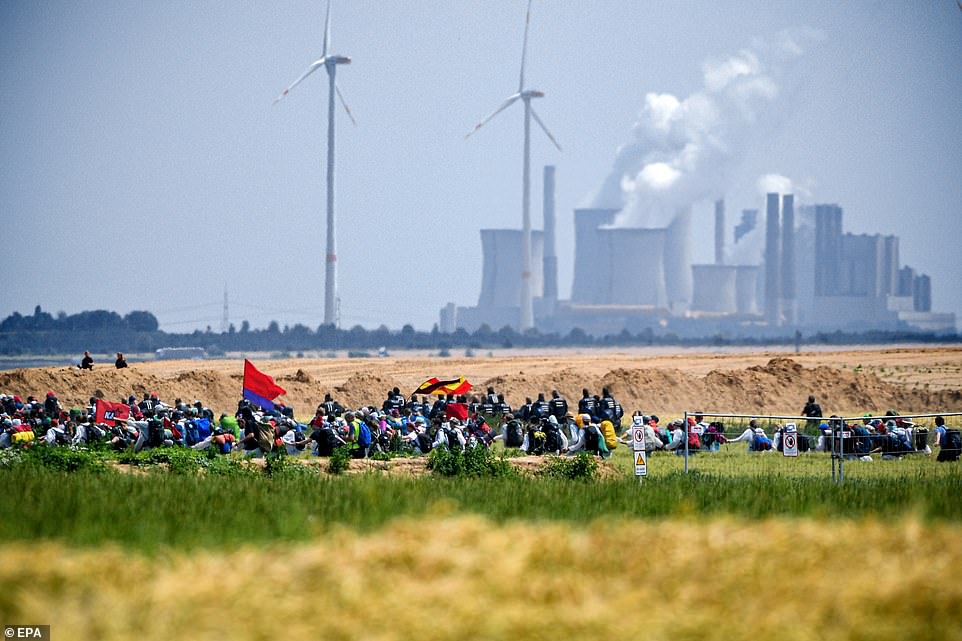 The mine has been the focus of many protests in recent years because the operator, German utility company RWE, planned to cut down a forest to enlarge it.

Later Sunday, Aachen police tweeted that RWE had filed a criminal complaint against those protesters who had locked themselves to the tracks. The utility company had stopped mining during the three days of protests.

Following months of climate protests by students and a sharp rise in the polls for Germany’s Greens party, German Chancellor Angela Merkel recently threw her weight behind the goal of making Germany climate neutral by 2050.

That would mean the country’s economy no longer would add greenhouse gases to the atmosphere.

Scientists say ending fossil fuel use by mid-century is a must if countries want to achieve the 2015 Paris climate accord’s most ambitious goal of keeping global temperatures from rising more than 1.5 degrees Celsius (2.7 degrees Fahrenheit) compared to pre-industrial times. 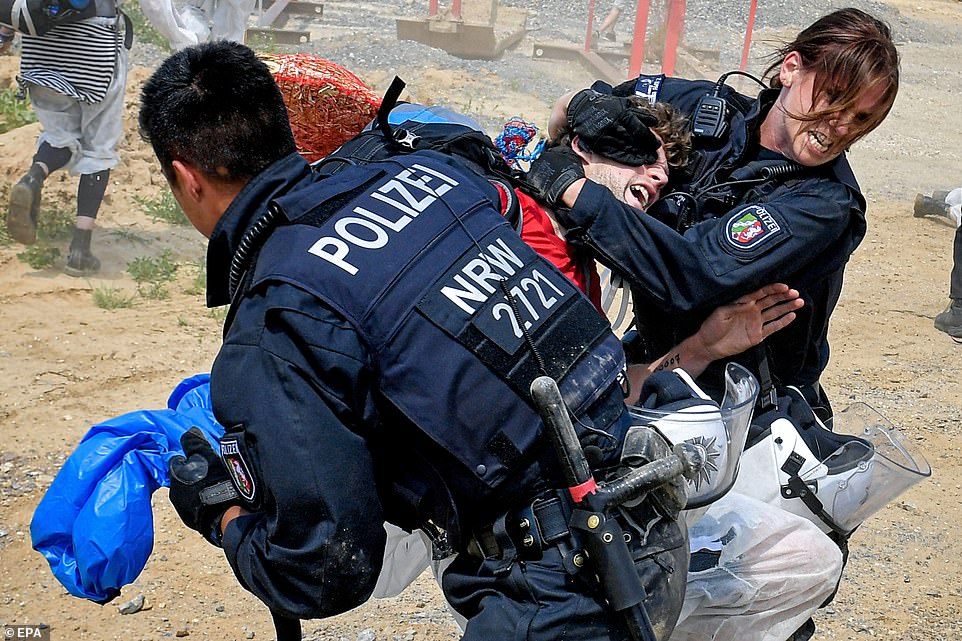 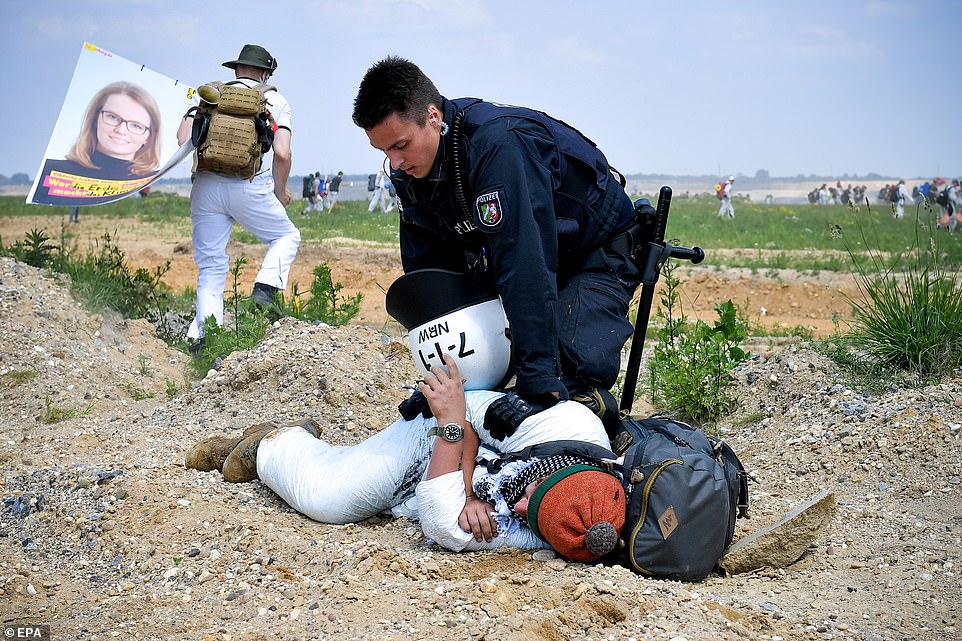 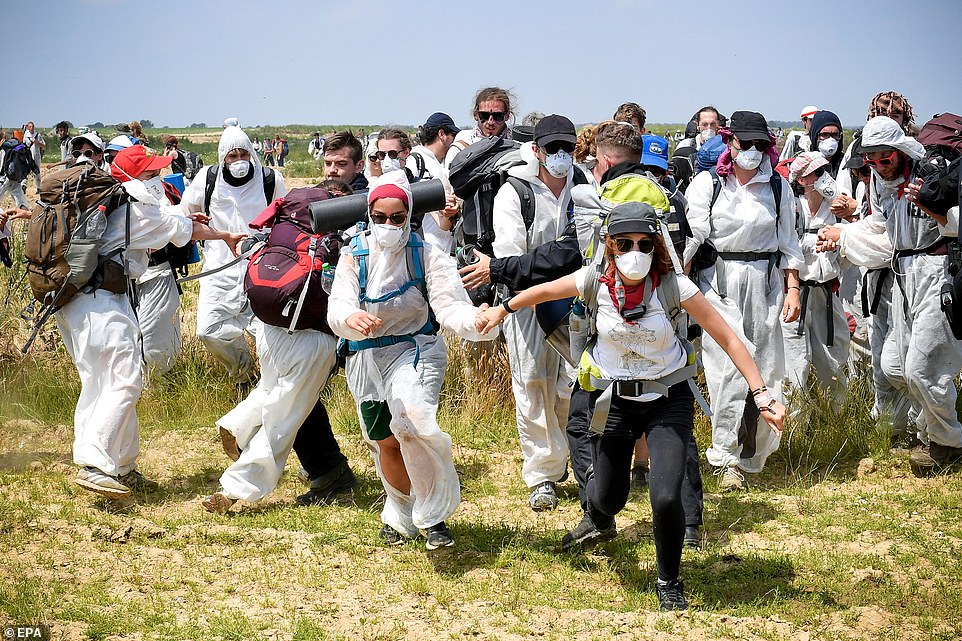 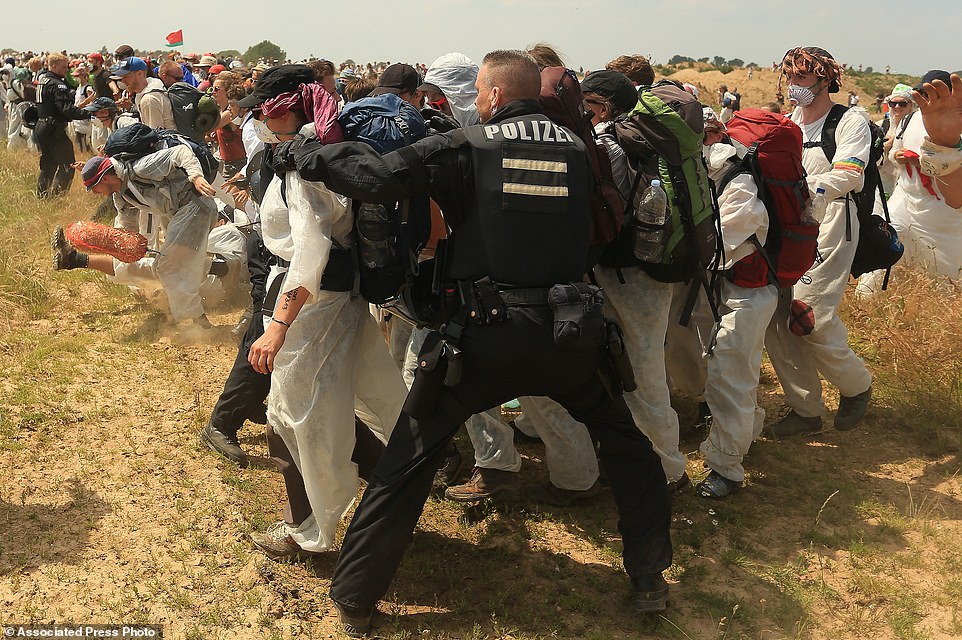 Numerous environmental activists walk on a roadway on the site of the Garzweiler open-cast mine in Garzweiler, Germany, Saturday, June 22, 2019. The protests for more climate protection in the Rhineland continue. (David Young/dpa via AP) 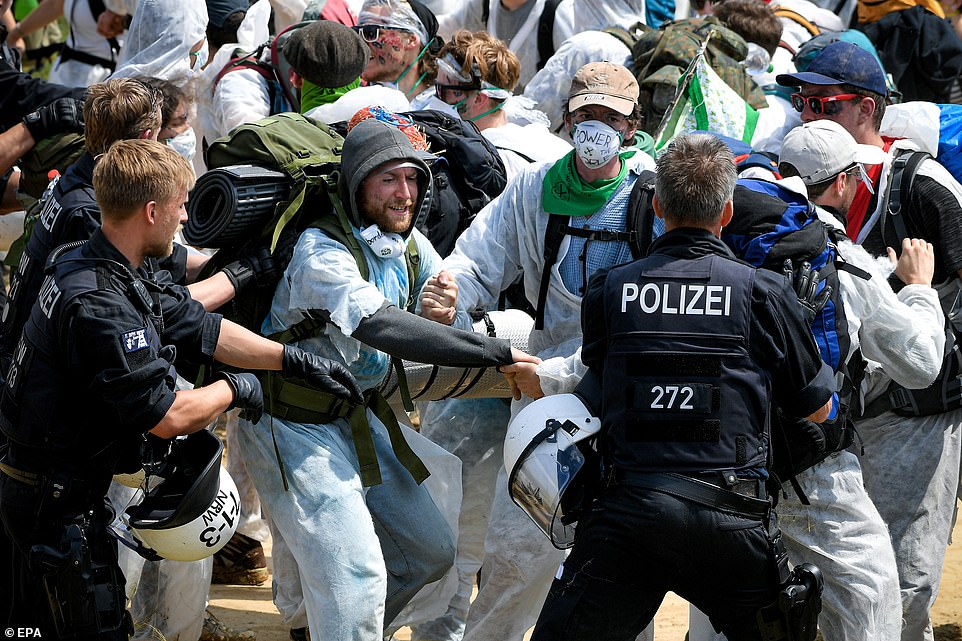 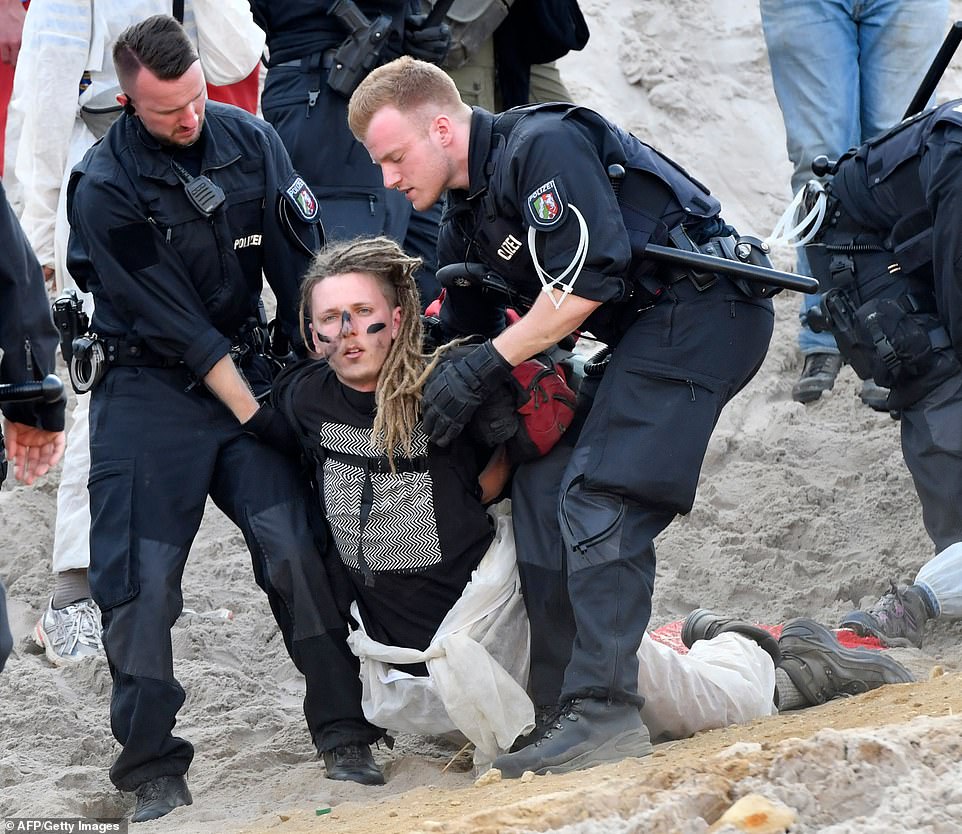 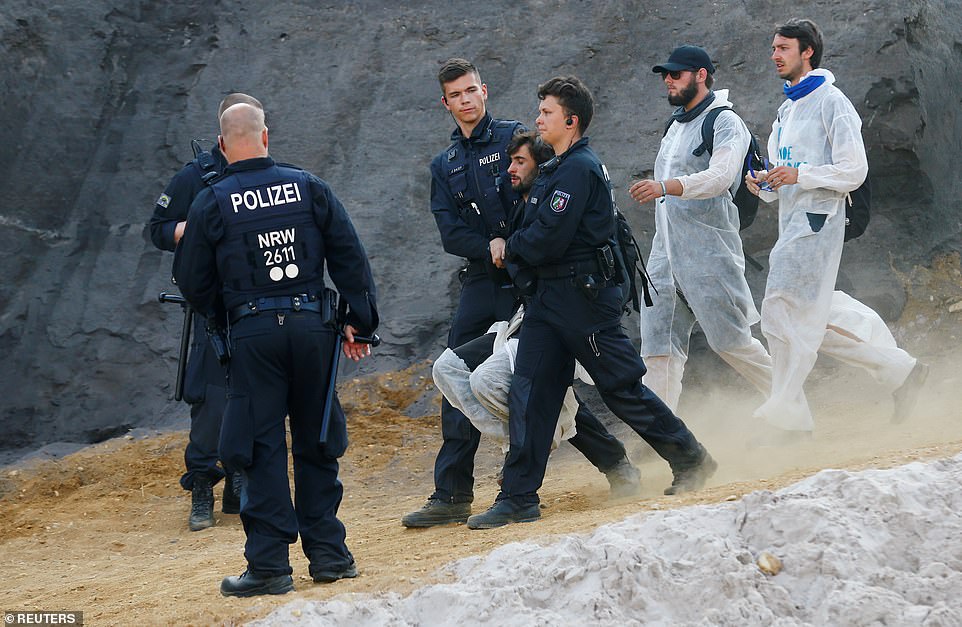 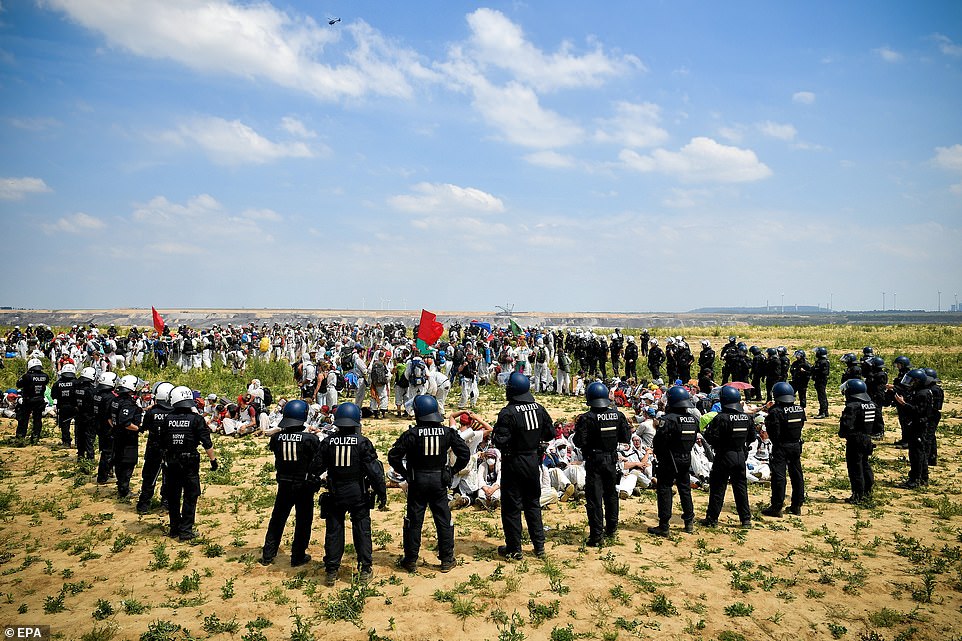