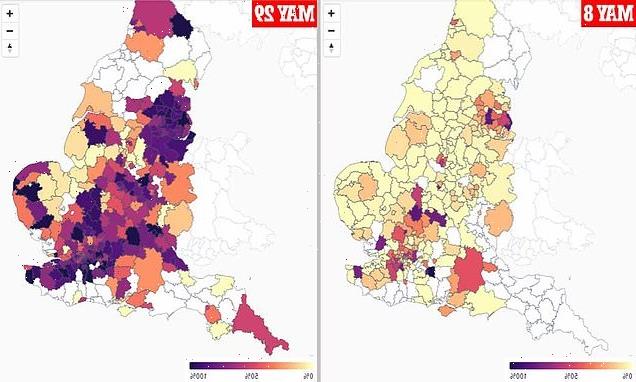 India’s Covid variant is now dominant in 201 authorities in England and has spread to more than 85 per cent of the country, data revealed today as infections started to rise in more parts of Britain than at any point since early January.

Surveillance data showed the mutant strain was responsible for more than half of infections in two thirds of England over the two weeks to May 29, the latest available.

This was double the number from the previous week, when it was the dominant variant in 102 areas, and eight times more than at the start of May when it was the main strain in just 23 areas.

It was behind 10,477 infections over the 14-day period, or almost 75 per cent of cases in the two-week period. Only 3,171 were due to the previously dominant Kent variant, which sparked the second wave in December.

Bolton was battling the biggest outbreak of the strain over the two weeks to May 29, when it detected 1,674 cases. Its neighbour Blackburn with Darwen was suffering the second biggest outbreak, recording 813 cases, followed by Manchester (493 cases) and Bedford (451 cases). Indian variant infections also surged in Birmingham, doubling from the previous week, while in Salford and Bury they tripled.

Separate data today showed nearly three quarters of councils across the UK, or 283 out of 380, saw their Covid infection rates start to rise over the seven days to June 2 amid the spread of the mutant strain.

This was the highest number since January 6, when the country was in the grips of the second wave. Blackburn with Darwen is the nation’s hotspot, with an infection rate at 515.7 cases per 100,000 people.

Matt Hancock yesterday warned the Indian variant may be around 40 per cent more transmissible than the previously dominant Kent variant, but studies show it is still susceptible to vaccine-triggered immunity.

There are mounting fears rising cases could put England’s June 21 ‘Freedom Day’ into jeopardy, but Boris Johnson said today there was still ‘nothing in the data’ to suggest a pause would be needed. No10 sources say no decision on whether to delay the reopening will be made until June 14, a week beforehand.

Britain today recorded another 5,683 Covid cases, up 68 per cent in a week, and one death from the virus. More than 40.4million Britons have received at least one dose of the Covid vaccine, as the drive was today opened to all over-25s across the country.

Mr Johnson’s spokesman said today: ‘There still remains that there is nothing in the data currently to suggest Step Four can’t go ahead at the earliest date. But we do need to look very closely at the data over this coming week.’ 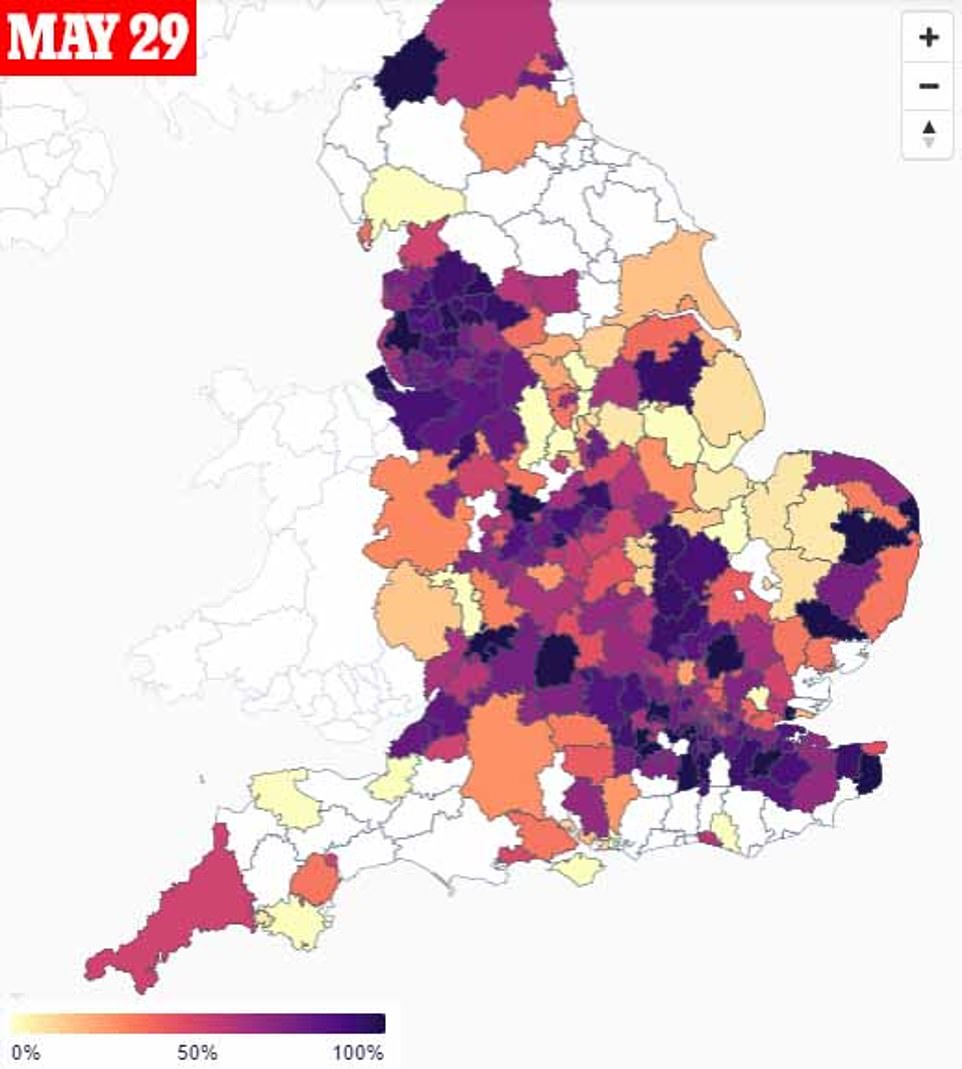 The above map shows the areas of England where the Indian variant of Covid was responsible for more than half of infections (coloured from red to black) over the two weeks to May 29, the latest available. Data showed it was dominant in 201 of 317 local authorities, or two thirds of England 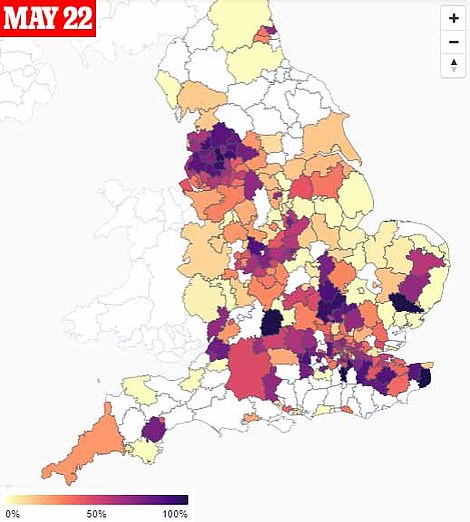 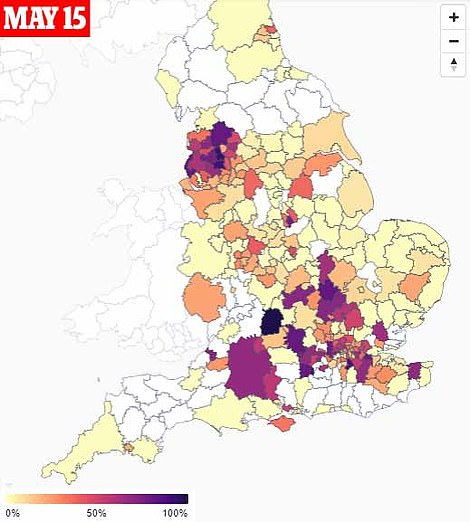 This is more than double the number in the previous two-week period to May 22 (left) when it was dominant in 102 areas, and higher than during the two weeks to May 15 (right) 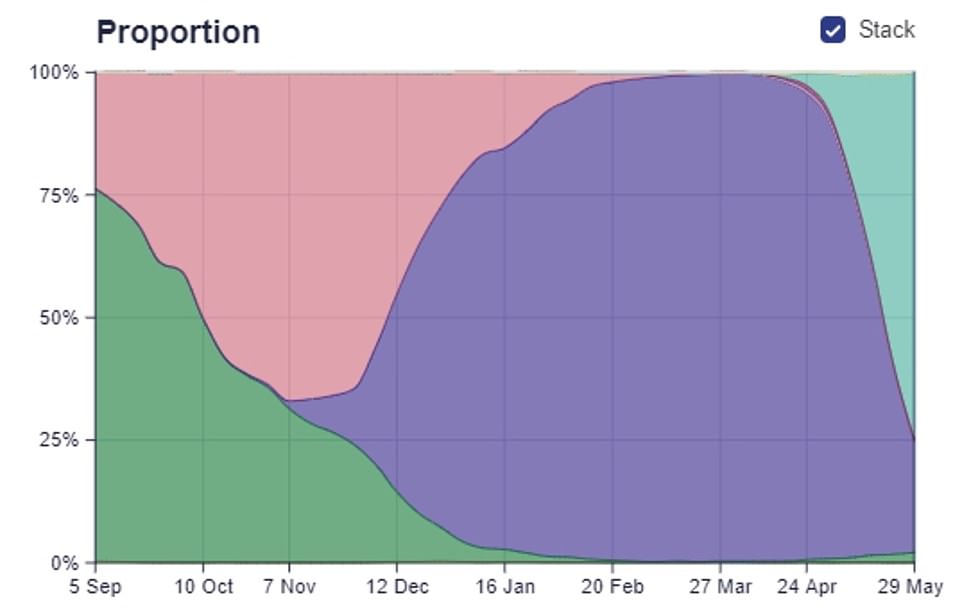 The Indian variant (light green) is now behind around 75 per cent of infections recorded in the UK. It has become the dominant strain, displacing the Kent variant (purple). The green and orange areas represent the original virus 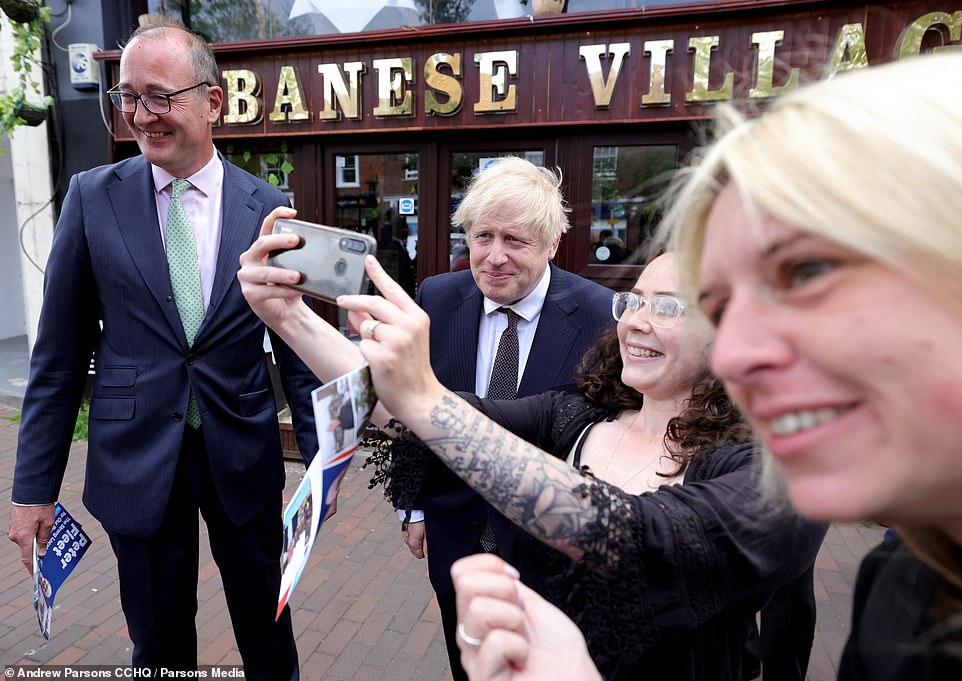 Boris Johnson said today he could still see ‘nothing in the data’ which showed England’s June 21 ‘Freedom Day’ should be delayed. The Prime Minister is pictured today in Chesham campaigning in a by-election

Ministers are watching Covid hospitalisation rates closely in case these rise following new outbreaks but in Bolton — which was first hit by the Indian variant — the number of Covid patients on wards is already falling.

Latest NHS figures show there were 42 people in hospital in the Royal Bolton Hospital with the virus on June 1, last Tuesday, down from 49 at the peak of the new variant scare a week earlier. The same pattern may be unfolding in neighbouring Blackburn with Darwen.

COVID HOSPITAL ADMISSIONS DOWN IN BOLTON

The number of patients needing hospital treatment for Covid is falling Bolton, the first area to be hit hard by the now-dominant Indian variant.

Latest NHS figures show there were 42 people in hospital in the Royal Bolton Hospital with the virus on June 1, last Tuesday, down from 49 at the peak of the new variant scare a week earlier.

The number of people being admitted to hospital each day has tumbled, too, to just three on May 30 compared to 14 five days before. The numbers are trailing a decline in cases which appears to show a spike in new variant cases has come under control.

The same pattern is hopefully beginning to unfold in neighbouring Blackburn, the UK’s current hotspot which has also been hit by the Indian ‘Delta’ strain, where infection numbers among over-60s have started to fall following a rise.

Although the borough’s infection rate was still rising at the end of May, a decline in infections among older people should help officials to keep hospital admissions and deaths under control.

More than 12,000 cases of the B.1.617.2 variant have been spotted so far in the UK and Public Health England last week admitted for the first time that it has become the most common variant in Britain. Almost one in five officially recorded cases – 2,149 – have been in Bolton, with another 724 in Blackburn with Darwen.

But the fact that Bolton has turned the tide of the super-infectious strain suggests it can be successfully controlled without lockdowns, instead using testing, contact tracing and vaccinations. 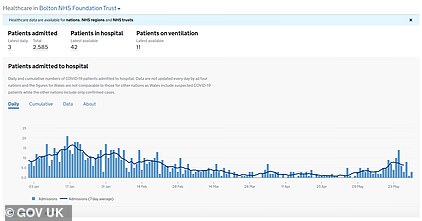 Surveillance data from the Sanger Institute — Britain’s largest centre for monitoring variants — showed the Indian variant was now dominant in more than 200 local authorities in England.

Its figures do not include infections picked up through surge testing or in tests done on perople returning from abroad, meaning they only reflect which strains of the virus are spreading in the community.

The proportions are based on the number of Indian variant cases compared to those from all variants identified over the two weeks to May 29. Local authorities with no cases of the variant either had no cases identified from this particular strain or no data available.

Scientists can find out which variant is behind an infection by analysing a swab in a lab for key mutations.

Among areas that recorded more than 100 infections with the Indian variant in the latest week, Oldham recorded the biggest surge in infections. It registered 128 infections, an almost five-fold increase from 22 in the previous seven-day spell.

It was followed by Cheshire East, where infections with the mutant strain spiked more than four-fold to from 20 cases to 112. Stockport saw the third sharpest rise, after they also jumped four-fold to 171, and Hyndburn saw the fourth biggest rise by more than two-fold to 114 cases.

Separate analysis compiled by the PA news agency showed Covid cases were now rising in more local areas across the UK than since the peak of the second wave.

But although cases ticked up in nearly three-quarters of local authorities, in just under half of these the increase was still in single digits.

A growing number of areas were recording sharp jumps in rates, however, with some of them large enough to push the area above 100 cases per 100,000 people.

Twenty-eight local authorities now have infection rates above this level, compared to none in April.

There are mounting fears rising cases could lead to a slowdown in the roadmap, because of concern they may spark rising hospitalisations.

But the Prime Minister’s official spokesman said today that No10 had ‘always expected’ cases to rise when the main lockdown ended in May – which they did last week, alarming scientists. They added that ministers will ‘look very closely at the data over this coming week’ to check hospitals aren’t being crippled again, before pressing ahead with any decision on June 21.

The spokesman continued that this week ‘will be crucial to decide and really to get a sense of the data, particularly on hospitalisations and whether or not the excellent vaccine rollout programme has sufficiently severed that link between the increase in cases, which we always expected to happen, particularly after Step Three, and that subsequently leading to hospitalisations and deaths’.

Asked if there is evidence of a third wave, the spokesman said: ‘We can see that the cases are rising in the UK, that is both due to the increased transmissibility of the Delta (Indian) variant, and to a certain extent the opening up of measures taken in Step Three.’

Hospitalisations in Bolton have already begun to fall after surge testing turned around a spike in infections.

Covid hospital admissions started rising in Bolton in the first week of May around 10 days after cases began to rise from the third week of April. 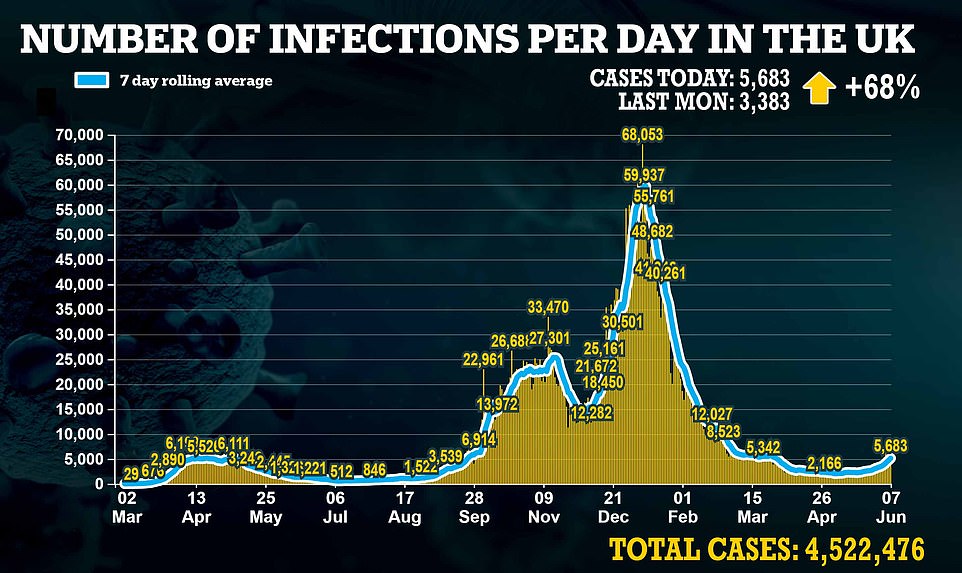 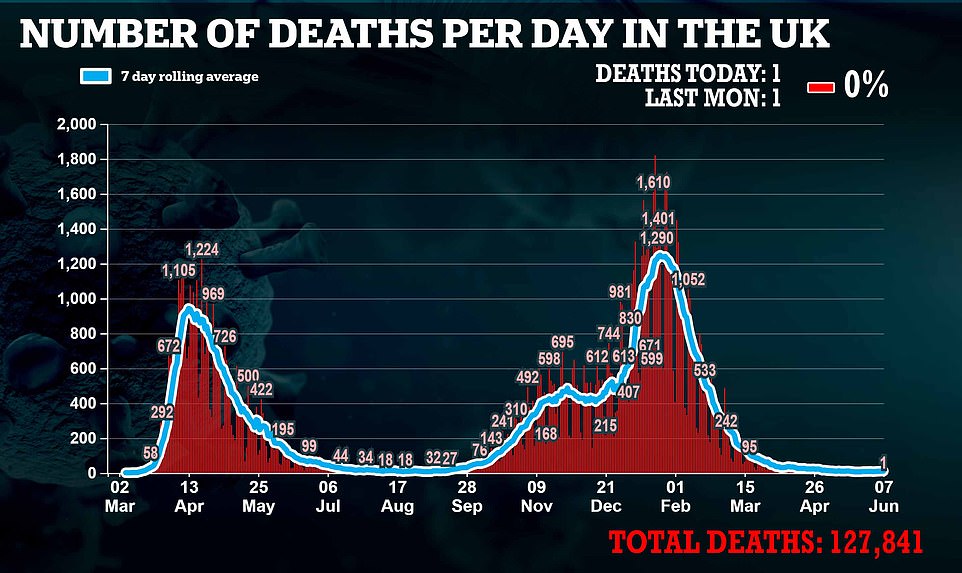 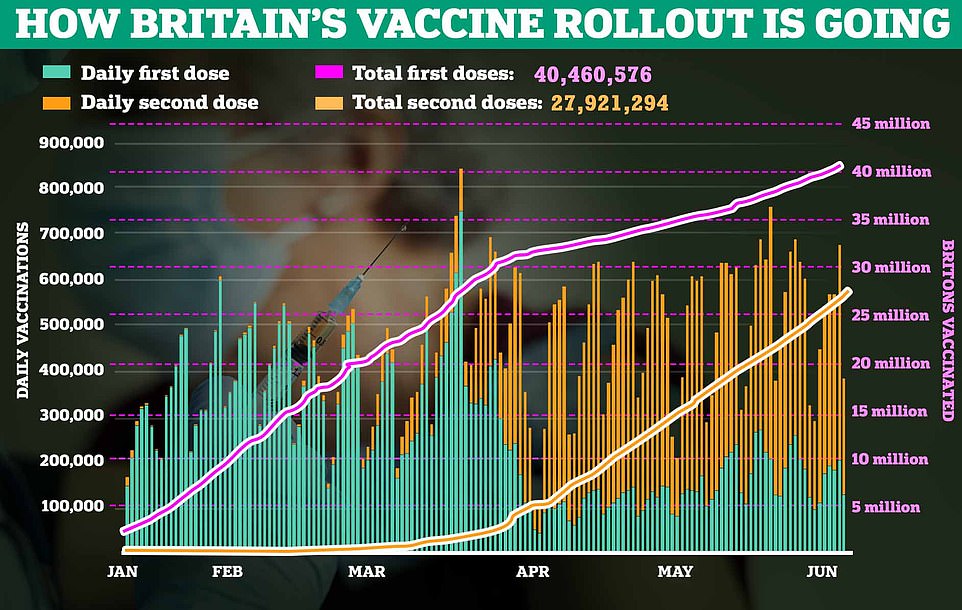 The town, home to around 200,000 people, was the first alarm bell that the Indian variant was taking off in Britain, as cases exploded there and a testing surge discovered hundreds of people infected with the strain.

Cases have been most common in under-55s, who are least likely to have had two doses of a vaccine, but hospital admissions rose in the wake of the rocketing cases.

Health Secretary Matt Hancock last week admitted the link between infections and hospital admissions, which vaccines should separate, has so far been ‘broken but not completely severed’.

Positive tests in Bolton started to come down in mid-May, falling from an average 186 per day on May 18 to 148 by May 29, with signs suggesting they fell even further last week. The most recent infection rate is 355 per 100,000.

The turning point in hospital admissions appeared to come a week later, peaking on May 25 with 14 people taken in to hospital, with the total number in hospital appearing to have started dropping on May 28.

“We are not seeing the same rapid spikes that we have previously, but we can’t rest on that, she said.

Public health chiefs will hope the same trend plays out in Blackburn with Darwen, a nearby borough in Lancashire that is home to around 150,000 people.

Top scientists warned today that Britain’s lockdown easing plan should be delayed ‘right away’ because rising cases of the Indian variant were leading to more people being hospitalised nationally.

Sir David told Sky News Covid hospitalisations were ‘slowly rising’. Department of Health data showed there were 932 people in the UK’s hospitals suffering from Covid on June 3, the latest available. This was up by around 7.5 per cent on the 867 the week before.

The emeritus professor at Cambridge University said: ‘I’m very reluctant to say that we should not go out of lockdown on June 21 but I think the figures are in now, and it will be wise for the Government to announce right away a delay in opening, just so that we can all plan for the post June 21 period.’

Asked for how long, he said: ‘I would give a few weeks’ delay and see how the figures are emerging. So, I don’t know how long. As the Prime Minister has said, it’s data, not dates, that we should be governed by, and that’s response as well.’

Another Government adviser said delaying the June 21 lockdown by a few weeks would be the best way of preventing another full-blown lockdown.

Professor Ravi Gupta, a member of NERVTAG, told BBC Breakfast: ‘I think that to go completely back to normal may not be in everyone’s best interests. We want this to be the last lockdown that we ever go into, and we do not want to go into a reverse situation which would be much more damaging to the economy, people’s businesses and long-term welfare.’

WHERE HAS THE INDIAN VARIANT BEEN SPOTTED?