Masked gunmen in desert camouflage rappelled from a helicopter to the deck of the Stena Impero as British navy frigate HMS Montrose stormed towards the scene, too far away to do anything but issue stern warnings over the radio. 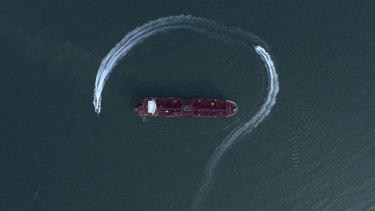 Aerial view of an Iranian Revolutionary Guard speedboat moving around the Stena Impero on July 21.Credit:Tasnim News Agency via AP

Iran intended the hijack as a tit-for-tat for the prior seizure of an Iranian tanker off Gibraltar, allegedly en route to Syria with oil supplies in violation of EU sanctions. But it has drawn Britain further into a fight it really doesn’t want right now.

But that’s what they have. Though there are signs Iran wants to calm the situation down, perhaps with a ship swap, Britain has already committed to a military response. And it threatens to – long before they’re ready – test some of this government’s fundamental beliefs about where they want to stand in the world. Are they Europeans or Team Trump? Are they interventionist and assertive, or soft power specialists?

What does their much-touted slogan, "Global Britain", actually stand for when push comes to shove? 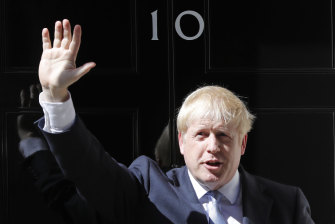 In a statement to the House of Commons on Monday then foreign secretary Jeremy Hunt, unaware (but perhaps suspecting) he had less than 48 hours to go in his job, made a surprise announcement.

“Because freedom of navigation is a vital interest of every nation, we will now seek to put together a European-led maritime protection mission to support safe passage of both crew and cargo in this vital region.”

It was a surprise because the US had already proposed a multinational maritime security force to protect shipping in the strait, to be called Operational Sentinel. The US Department of Defence said Sentinel would have “de-escalation” as a priority.

But this sat uneasily alongside US President Donald Trump’s “maximum pressure” campaign against Iran, and NATO allies were reluctant to engage.

Hunt said the European mission “will not be part of the US maximum pressure policy on Iran, because we remain committed to preserving the Iran nuclear agreement”.

He softened the blow by revealing HMS Montrose had received US logistical support, and they “will seek to coordinate any European efforts on freedom of navigation with anything the US does”, accepting their help in refuelling, communications and intelligence.

But the message was clear. The US was mildly toxic in this arena, and its allies wanted to keep their distance.

Hunt, of course, is now a mere backbencher. Johnson is PM and the man who recently effectively sided with Trump in a diplomatic spat with the UK’s own ambassador.

Much has been made of the relationship between Trump and Johnson, not least by Trump himself, who embarrassed his host Theresa May last year by standing next to her in her own back garden and saying Johnson would make “a great prime minister” (at the same press conference Trump said the US-UK relationship was “the highest level of special”).

One Iranian newspaper had a cartoon of Trump patting his new British butler on the head.

On Johnson’s entry to Number 10, Trump claimed him as the “Britain Trump” – prompting a torrent of Iranian media editorials calling Johnson “Trump’s duplicate” and “Trump’s body double”. One Iranian newspaper published a picture with Johnson casting a Trump-shaped shadow, another had a cartoon of Trump patting his new British butler on the head.

There were immediate echoes of a previous transatlantic relationship with immense implications in the Gulf: that of George W. Bush and Tony Blair. 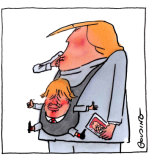 Of course, Iran and Trump could both be wrong. When governments change, policies may or may not change. And international eyes are on this new government for the first clues as to which way it will jump.

Neither Johnson nor Foreign Secretary Dominic Raab made a significant public comment on international affairs in their first 24 hours in office.

Johnson has focused on domestic affairs and Brexit. During his first marathon Q&A in the Commons on Thursday he was asked about the Navy (Britain is underpowered in the Gulf as fully half its diminished fleet is out of action). Johnson replied he had a “strong desire to increase [defence] spending, particularly on shipbuilding”, then turned it into a question about trade.

Of course Johnson was foreign secretary for two years so there are clues as to where he stands (assuming, counter to the claims of some critics, that he consistently stands for anything).

In his 2016 speech to the Conservative Party conference he said it was “partly as a result of [a] lack of Western self-confidence – political, military, economic – that in some material ways the world has got less safe, more dangerous, more worrying”. 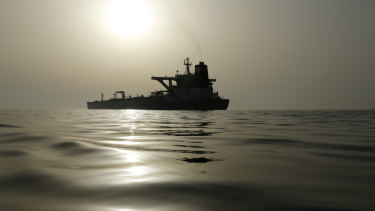 The impounded Iranian crude oil tanker, Grace 1, anchored off the coast of Gibraltar.Credit:Bloomberg

He said “the message of Global Britain to the world” should be as “a campaigner for the values we believe in, a catalyst for change and reform and economic and political freedom”.

Johnson has been a vocal supporter of the Iran nuclear deal – the same one the US under Trump has since rejected – saying it was a “genuine achievement of diplomacy that has helped to make the world a safer place” and urging people to “think of the nightmare that deal has avoided”.

Raab, a Eurosceptic and karate black belt, has left a few breadcrumbs hinting at his instincts. In 2010 he said Britain should “strengthen the transatlantic alliance and cooperate with our European partners – but be tied to the hip of neither”. He also argued for a practical foreign policy grounded in “tangible interests” rather than ideology – and again in 2011 said foreign policy should “put the national interest first”.

After his promotion on Wednesday he was asked about the Iran issue on the steps of the Foreign Office, and answered that he didn’t want to say anything until he’d gone inside and his civil servants had briefed him.

A search of Hansard finds just one mention of Iran during Raab's entire parliamentary career, despite the fact that before entering parliament he spent six years at the foreign office as a lawyer working on the Middle East, war crimes and conflict resolution.

Edward Elliott, founder of the British Foreign Policy Group think tank, says the so-called “special” relationship between Britain and the US is “on shaky ground”, damaged by the low opinion Britons have of Trump and Americans had of May.

“It will be really interesting to see what changes Boris Johnson brings about,” Elliott says. “Clearly he has been positioning himself as a true ally of Donald Trump. For Trump it’s very clear that he enjoys the personal relationship aspect [of international relations]. Any outward, public, visible gestures, even if they are more symbolic, are really important – and that’s something Boris Johnson seems to be very aware of and playing up to.”

Elliott says a key priority for Britain is to find new international allies in security and trade. But getting too close to the US right now would require ditching a lot of principles. 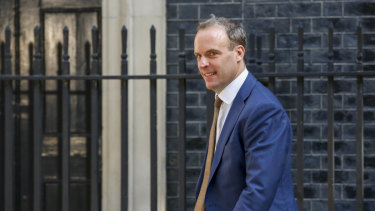 Instead, he says, Britain might use the Iran opportunity to send a message to Europe, that they can get along and cooperate despite Brexit.

“It is important for the UK to be able to show leadership on the European front outside of Brexit, and security issues are one of the key areas for that.”

Thomas Raines, head of the Europe Program at Chatham House, has noticed what he calls “shifting currents” in the Conservative Party, “with some supportive of a harder-nosed, more interest-driven” foreign policy with scepticism about aid, climate change and immigration.

But just at the time Britain is cutting ties with Europe it looks across the Atlantic and finds an agenda it is uncomfortable with, Raines says.

“There’s a fundamental disagreement on Iran policy between the US and Europe,” he says. “Despite Brexit and despite Boris Johnson being foreign secretary, the UK has basically stayed on Europe’s side of that disagreement [over the Iran nuclear deal].”

There is a fear “that involvement with the US in the Gulf creates a risk of escalation," Raines says.

“There is a very good close working relationship between the British and US military but it’s more about concerns about the political direction of the US [being] hawkish and aggressive.”

Iran is not the only issue where Britain has trouble aligning too closely with the US: there is also trade, Ukraine, Russia, China and climate change, in all of which the UK finds itself closer to Europe.

And Raines doesn’t predict a shift of policy to please Trump.

“There’s quite a lot being made of Johnson and Trump being pally,” Raines says. “But I’m struggling to think of anyone who has invested a lot in having a good relationship with Trump and got a lot out of it.”

May made an effort and was rewarded with Trump retweeting British far-right figures and picking a fight with London’s mayor.

Raines says it’s hard to read which way Johnson will jump as PM.

“Was there a clear and distinctive ideological underpinning to what he did [as foreign secretary]? I don’t think so especially. It was similar to his [leadership] campaign – driven by optimism and a sense of British exceptionalism.”

The “Global Britain” idea “started as a slogan then people worked out the content afterwards. It was never clear what it meant," Raines says.

It also conflicted with what the country was actually doing on immigration, on visa policy and international tax avoidance.

“There’s a gap between rhetoric and reality.”

Raines expects a closer alignment between foreign policy and trade after Brexit. And he thinks there will be a push for a “harder-edged” foreign policy for Britain, where it will demand a bit more pro quo for its quid.

But Raines doubts we will learn much detail when Johnson turns up at the G7 in France next month.

There you’ll see the energetic, eccentric Johnson in action.

“He’ll want to show that Britain is here, Britain is back,” he says. “There will be some bilateral meeting between Boris and Trump that will capture attention. I think he’s less afraid of being seen to have a good relationship with Trump.

“And there’s a danger because Trump is so unpredictable and combustible that you can imagine if that meeting doesn’t go well suddenly you get a tweet saying ‘really disappointing meeting with Boris, very anti-US, what a loser. What a weak majority he has. Election coming soon. Vote Farage.’

“That relationship comes with a huge amount of volatility and peril.”