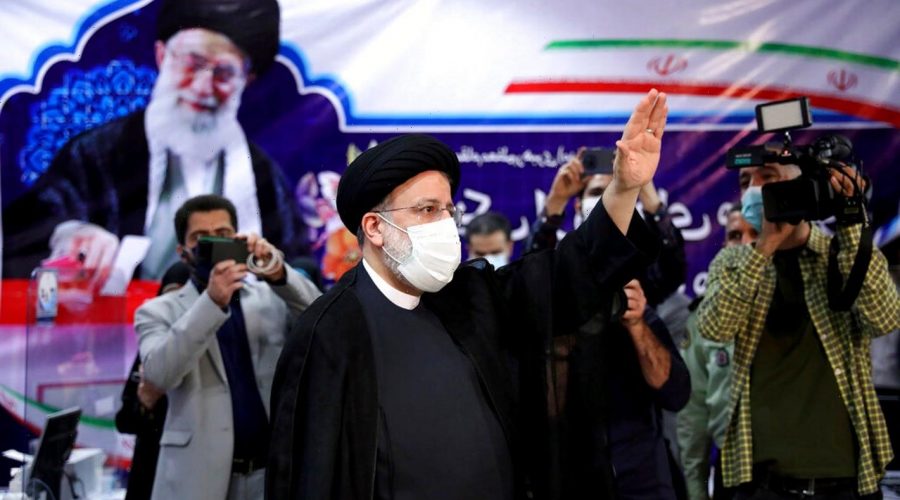 DUBAI, United Arab Emirates  — Iran’s judiciary chief, a hard-line cleric linked to mass executions in 1988, registered on Saturday to run in the Islamic Republic’s presidential election next month, a vote that comes as negotiators struggle to resuscitate Tehran’s nuclear deal with world powers.

The cleric, Ebrahim Raisi, is among the more prominent hopefuls — he garnered nearly 16 million votes in the 2017 election. He lost that race to Iran’s relatively moderate President Hassan Rouhani, whose administration struck the atomic accord.

Raisi’s close ties to Supreme Leader Ayatollah Ali Khamenei and his popularity — due partly to his televised anti-corruption campaign — could make him a favorite in the election. Analysts already believe that hard-liners enjoy an edge as Rouhani is term limited from running again. The public has widely grown disenchanted with Rouhani’s administration after 2018, when then-President Donald Trump unilaterally withdrew America from the nuclear deal.

Raisi, wearing a black turban that identifies him in Shiite tradition as a direct descendant of Islam’s Prophet Muhammad, offered fiery remarks to journalists at the Interior Ministry as he registered. He vowed that if he wins the June 18 vote, corruption will be “dried up.”

The 60-year-old sought to strike a populist note, urging the public to donate to his campaign and “turn their homes into election headquarters” as he wasn’t wealthy.

“We need individuals who believe in change,” he said.

Raisi had been named as a possible successor to Iran’s 82-year-old supreme leader, leading some to suggest he wouldn’t run in the race. His entry immediately saw some hard-liners announce they would withdraw, raising Raisi’s prominence further among the candidates.

What people think of Ebrahim Raisi

A February telephone survey conducted by the Chicago Council on Global Affairs and the Toronto-based organization IranPoll found Raisi with an approval rating of 27%, the highest among likely candidates. The survey found 35% undecided; the poll interviewed 1,006 Iranians and had a margin of error of 3.09%.

“I think he’s someone that the system trusts, particularly Khamenei,” said Sanam Vakil, the deputy director of Chatham House’s Middle East and North Africa Program. “If you look at Raisi’s biography and background, it reads quite similar to that of the supreme leader’s.

“If Khamenei is thinking about his legacy, he would probably be looking for someone who is similar to him and ideologically aligned with him and looking to protect what Khamenei has done over the last 30 years,” Vakil added.

Activists hold a jaded view of Raisi. As the head of the judiciary, he oversees a justice system in Iran that remains one of the world’s top executioners. United Nations experts and others have criticized Iran for detaining dual nationals and those with ties abroad to be used as bargaining chips in negotiations with the West.

Then there’s the 1988 mass executions that came at the end of Iran’s long war with Iraq. After Iran’s then-Supreme Leader Ruhollah Khomeini accepted a U.N.-brokered cease-fire, members of the Iranian opposition group Mujahedeen-e-Khalq, heavily armed by Saddam Hussein, stormed across the Iranian border in a surprise attack.

Iran ultimately blunted their assault, but the attack set the stage for the sham retrials of political prisoners, militants and others that would become known as “death commissions.” Some who appeared were asked to identify themselves. Those who responded “mujahedeen” were sent to their deaths, while others were questioned about their willingness to “clear minefields for the army of the Islamic Republic,” according to  a 1990 Amnesty International report.

International rights groups estimate that as many as 5,000 people were executed, while the Mujahedeen-e-Khalq puts the number at 30,000. Iran has never fully acknowledged the executions, apparently carried out on Khomeini’s orders, though some argue that other top officials were effectively in charge in the months before his 1989 death.

Raisi, then a deputy prosecutor in Tehran, took part in some of the panels at Evin and Gohardasht prisons. A tape of a meeting of Raisi and his boss meeting prominent Grand Ayatollah Hossein Ali Montazeri leaked out in 2016, with Montazeri describing the executions as “the biggest crime in the history of the Islamic Republic.”

Former Iranian parliament speaker Ali Larijani shows his identification document while registering his name as a candidate for the June 18 presidential elections at elections headquarters of the Interior Ministry in Tehran, Iran, on May 15, 2021. (Photo: Ebrahim Noroozi, AP)

Raisi never publicly acknowledged his role in the executions while campaigning for president in 2017. After his loss, Khamenei appointed him as head of the judiciary in 2019.

Raisi previously ran the Imam Reza charity foundation, which manages a vast conglomerate of businesses and endowments in Iran believed to be worth tens of billions of dollars. It is one of many bonyads, or charitable foundations, fueled by donations or assets seized after Iran’s 1979 Islamic Revolution.

Analysts have speculated that Khamenei could be grooming Raisi as a possible candidate to be Iran’s third-ever supreme leader, who has final say on all state matters and serves as the country’s commander-in-chief.

Within Iran, candidates exist on a political spectrum that broadly includes hard-liners who want to expand Iran’s nuclear program, moderates who hold onto the status quo, and reformists who want to change the theocracy from within.

Those calling for radical change find themselves blocked from even running for office by the Guardian Council, a 12-member panel that vets and approves candidates under Khamenei’s watch.

Iranian Vice President Eshaq Jahangiri speaks to media after registering his name as a candidate for the June 18 presidential elections at the elections headquarters of the Interior Ministry in Tehran, Iran on May 15, 2021. (Photo: Ebrahim Noroozi, AP)

Other candidates who registered on Saturday, the last day of the registration, include Ali Larijani, a prominent conservative voice and former parliament speaker who later allied himself with Rouhani. Another hopeful is Mohsen Hashemi Rafsanjani, the eldest son of the late former Iranian President Akbar Hashemi Rafsanjani and a prominent reformist on Tehran’s city council.

Several of the hopefuls have prominent backgrounds in the Revolutionary Guard, a paramilitary force answerable only to Khamenei. Iran’s former hard-line President Mahmoud Ahmadinejad registered Wednesday.

The Guardian Council will announce a final list of candidates by May 27, and a 20-day campaign season begins the following day.