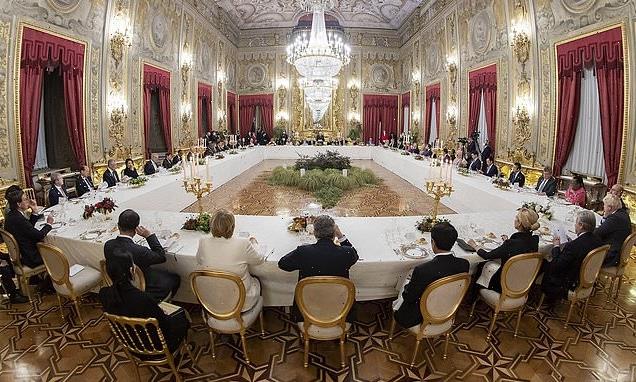 The Italian President held a special gala dinner for G20 leaders in Rome this evening ahead of the Cop26 climate summit in Glasgow that kicks off tomorrow.

Mr Biden was seated next to the Italian President and President of the European Commission Ursula von der Leyen – all at the head of the table with Mattarella.

Mr Macron meanwhile was seated next to Biden’s wife Jill on one side, while Mr Johnson was in one of the far corners from where the Italian President was seated. Mr Johnson’s wife – Carrie – was also in attendance.

Their dinner menu included marinated salmon, risotto with pumpkin and white truffle, and sea bass, with a tangerine cream dessert.

The reception comes amid high tensions between Mr Johnson and Mr Macron as Britain and France continue to clash over post-Brexit fishing licences.

Macron and Jill Biden’s seating arrangement, however, suggests that the US and France have repaired the relationship damage done over a multi-billion-dollar submarine deal that infuriated the French. 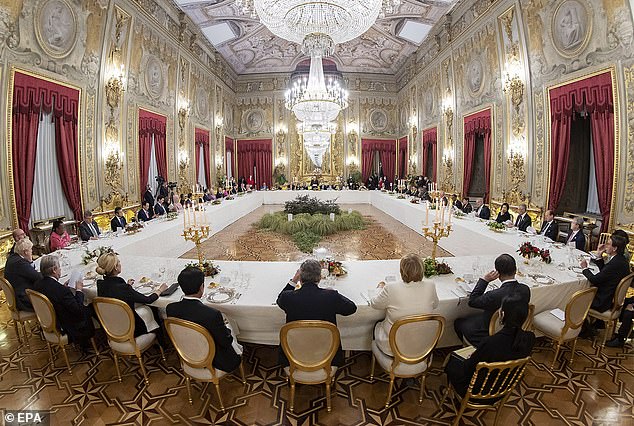 A handout photo made available by the Quirinal Press Office shows Italian President Sergio Mattarella (at the far side of the table) as he delivers a speech during an official dinner on the occasion of the G20, Rome, Italy, 30 October 2021

Earlier on Saturday, Johnson complained to Ms von der Leyen that French threats over fishing were ‘completely unjustified’ as a British minister said London was ‘actively considering’ invoking a Brexit dispute tool for the first time.

For her part, Von Der Leyen tweeted that the European Commission was ‘intensively engaging for finding solutions’ on both the fishing spat and another linked row with Brussels over their divorce pact’s implementation in Northern Ireland.

The simmering feud over fish has already seen a British trawler detained in a French port and Paris’ ambassador in London summoned to the Foreign Office for the type of dressing down usually reserved for hostile states not allies.

France is incensed that Britain and the Channel Islands of Jersey and Guernsey have not issued some French boats licences to fish in their waters post-Brexit.

Paris has vowed that unless licences are approved, it will ban UK boats from unloading their catches at French ports from next Tuesday and impose checks on all products brought to France from Britain.

The dinner came after world’s G20 world’s major economies approved a global minimum tax on the largest companies, but were still haggling over the pressing issue of climate change. 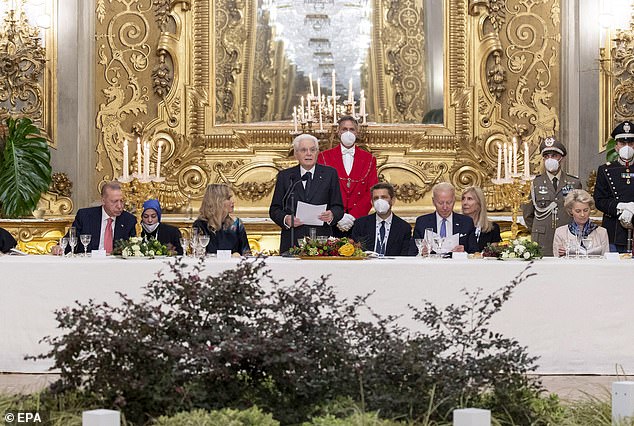 In the first major announcement of the two-day G20 summit in Rome, the bloc endorsed a ‘historic’ agreement that would see multinationals subject to a minimum 15 percent tax, said US Treasury Secretary Janet Yellen, who attended the talks.

The deal would ‘end the damaging race to the bottom on corporate taxation’, she said in a statement.

The reform plan, already backed by almost 140 countries, seeks to end the practice of big corporates such as Apple and Google parent Alphabet of sheltering profits in low-tax countries.

But no consensus had yet emerged on a collective commitment on climate change, on the eve of the crucial Cop26 conference starting in Glasgow on Sunday.

A senior US official said elements of the final G20 statement ‘are still being negotiated’, adding that the Rome summit was about ‘helping build momentum’ before the UN climate talks.

At a gala dinner at his lavish Qurinale palace on Saturday evening, Italian President Sergio Mattarella urged leaders to act for the sake of ‘future generations’.

‘The climate change emergency looms over everything else,’ the 80-year-old said, adding: ‘The eyes of billions of people, of entire peoples, are upon us and the results we will be able to achieve.’

Earlier in the day, thousands of climate protesters, many of them young, gathered in the city centre to demand tougher action.

‘We’re asking G20 leaders to stop playing games among themselves and finally listen to the people and act for the climate, as science has been asking for years,’ Fridays for Future activist Simone Ficicchia told AFP.

Hosts Italy are pushing the G20 to collectively endorse the UN goal of limiting global warming to 1.5 degrees Celsius above pre-industrial levels, one of the aspirations of the landmark 2015 Paris climate accords. 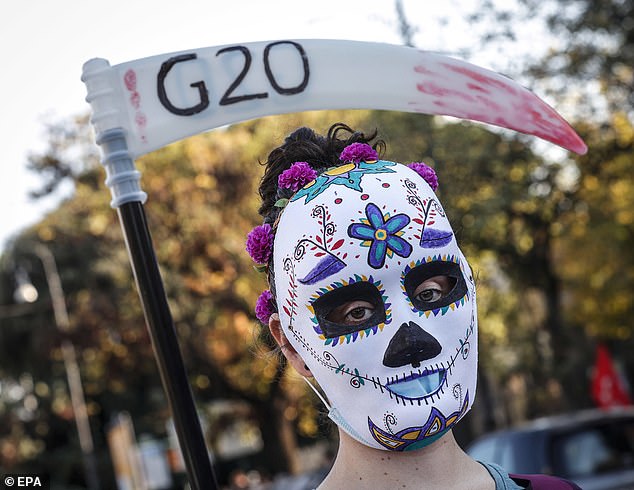 A demonstrator wears a death mask during environmental protests at G20 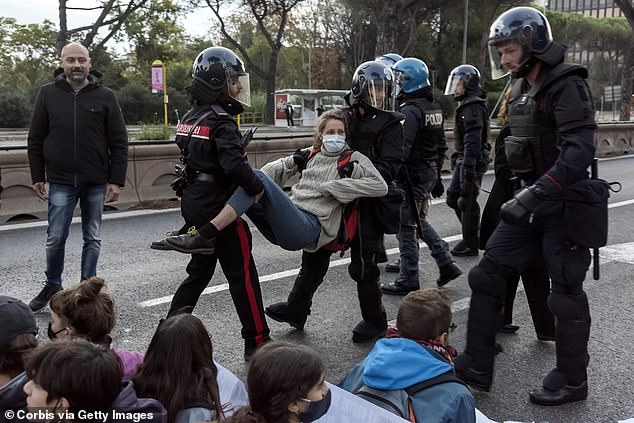 ‘From the pandemic, to climate change, to fair and equitable taxation, going it alone is simply not an option,’ Italian Prime Minister Mario Draghi told leaders ahead of the closed-door talks.

But G20 members, many at different stages of economic development, remain at odds over the other major goal of reducing greenhouse gas emissions to net zero by 2050.

The stakes are high, as the G20 – which includes China, the US, India, the EU and Russia – accounts for 80 percent of global GDP and nearly 80 percent of greenhouse gas emissions.