London: Coronavirus deaths in Italy have skyrocketed to the highest level since the worst days of the country's first outbreak, piling pressure on the government to reimpose a second national lockdown.

Authorities on Tuesday announced 731 new deaths had been recorded over the previous 24 hours – the highest daily figure since early April when the world was shocked by footage of overwhelmed hospitals and military trucks filled with coffins. 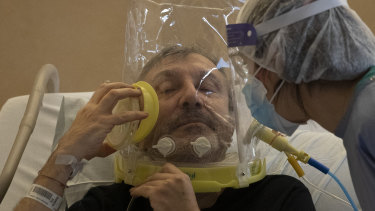 Nazzareno Santilli is treated by Dr Elisabetta Teti in a sub-intensive COVID-19 unit in a Rome hospital.Credit:AP

Prime Minister Giuseppe Conte has resisted imposing the type of national lockdown he ordered in March, opting for a three-tier system based on the severity of a local outbreak.

A series of anti-lockdown demonstrations have been held across Italy's major cities recently as frustration with the economic impact of restrictions grows. Petrol bombs have been thrown at officers in Turin and police had to use tear gas to break up protests in Milan.

A merry-go-round is closed in Piazza della Repubblica Square, in Florence, Italy.Credit:AP

Andrea Crisanti, a professor of microbiology at the University of Padua and expert in molecular parasitology at Imperial College London, has suggested tougher restrictions may be needed.

"Next week we’ll know if the curve has stabilised or has started to come down," he told the ANSA news agency.

"If it does not come down, it will be necessary to do something else.

"The social and emotional price is immense. Some 9000 people have died since the start of the second wave, we must not forget that."

Crisanti told The Sydney Morning Herald and The Age in September that Italy's unique approach to testing over summer explained why it had avoided the worst of a second wave sweeping the rest of Europe.

When a positive case was detected, Italian authorities tested everyone in that person's orbit — including their family, friends, colleagues and neighbours — regardless of whether they were ever exposed.

But Cristanti warned in September that the country might not be spared a major surge of cases, hospitalisations and deaths if testing could not keep pace with new infections.

Elsewhere, Belgium, Austria, Poland, Croatia, Hungary and the Czech Republic are also dealing with a resurgence of cases.

Doctors in Hungary have warned that a lack of medical staff qualified to treat coronavirus patients in intensive care units could soon lead to soaring deaths and a breakdown in the country's fragile health care system. 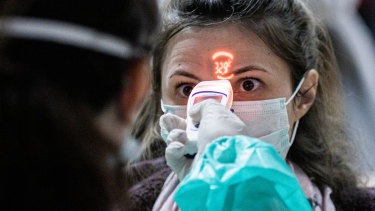 A woman is temperature tested at an airport in Hungary, which is battling a major second wave of coronavirus. Credit:Bloomberg

Prime Minister Viktor Orban last week announced the strictest restrictions to date to combat rapidly rising coronavirus hospitalisations and deaths, predicting that without the measures Hungary's health care system had only a 50 per cent chance of coping with the pandemic.

The government has ordered hospitals to expand ICUs to accommodate the rapid rise in patients and earlier this year purchased 16,000 ventilators at a cost of €842 million ($1.367 million) for the expected winter surge.

But Hungarian Chamber of Doctors has warned that the number of ICU beds and ventilators are overshadowed by a lack of qualified doctors and nurses to treat ICU patients.

"You have the beds, but you don't have the nurses and doctors who can treat [the patient] on the bed, so they just lie there," said Peter Almos, the vice-president of the chamber.

New restrictive measures that took effect last week – including an 8pm to 5am curfew, mandatory mask-wearing in public, a 10-person limit on family gatherings and remote learning for high school and university students – were taken "too late", Almos said.