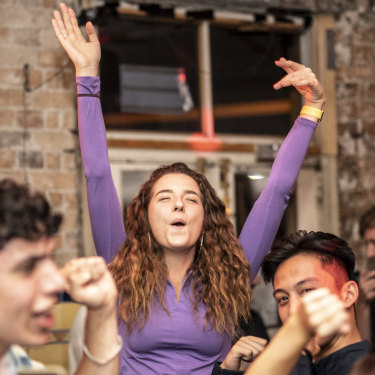 A women in a purple top loses herself in the moment on the dance floor at the Lord Gladstone Hotel.Credit:Cole Bennetts

They were literally climbing the walls to get to the dance floor.

Friday night — the first since a major easing of coronavirus restrictions allowed the return of dancing at nightclubs — marked the revival of Sydney's nightlife. Sort of.

Aspiring dancers were out in force and the late-night venues that could make it work threw open their doors, clearing tables out of the way and hosting scenes unknown since March.

"The feeling is better than it was before COVID," said Isaac, DJing at the Lord Gladstone in Chippendale. 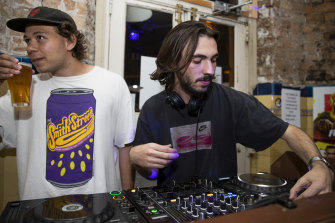 DJs are back in business playing to live dance floors at the Lord Gladstone Hotel.Credit:Cole Bennetts

Before him, the small dance floor was alive. He was exclusively delivering what the people wanted: classic party pleasers. It wasn't a night for hardcore EDM, it was for Rock Your Body by Justin Timberlake, Jump Around by House of Pain, Hollaback Girl by Gwen Stefani.

Outside, stressed but happy publican Ben Johnson scrambled to the back alley where three men were on top of dumpsters, trying to scale the wall to get into the Gladdy's courtyard.

Reviving the venue's beloved dance floor is a massive relief, Johnson said, but there is still stress and uncertainty about managing the new rules and people's enthusiasm.

"They're straight back into it," said Johnson. "The hardest thing I have found tonight … is the general population do not understand the restrictions. They just think dance floors are back." 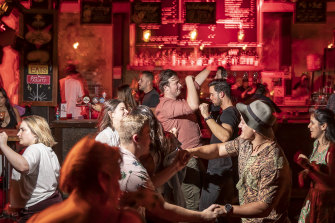 Punters get their chance to finally dance at the The Soda Factory.Credit:Cole Bennetts

A maximum of 50 people — and no drinks — on the dance floor. Nightclubs and dance floors are still subject to the one person per 4 square metre rule, not the 2 square metres now granted at other venues.

As a result, managers and bouncers watch like hawks and jump on any violations. They have to monitor people's movements through different parts, indoor and outdoor, of the venue to stay compliant.

"We are making it up as we go along, within the restrictions," Johnson said.

"It's a constant battle, but the vibes are good."

Realistically, social distancing is out the window. It's back to sweaty bodies rubbing up against each other, people bumping into each other as they navigate their way through the crowd.

Adam from Tamarama (or "Rudy", his persona on the night of his Christmas party) said he was loving the opportunity to show off his questionable dance moves again. 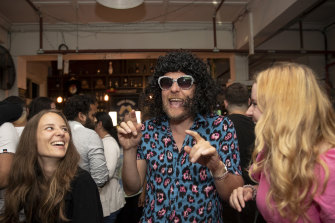 "Rudy" busts some moves at the Lord Gladstone. Credit:Cole Bennetts

"It's great, apart from the no drinks on the dance floor," he said.

At the Soda Factory in Surry Hills, all the usual characters made an appearance. The circle of completely wasted friends, the couple pashing like there's no one around, the guy doing his trusty side-to-side shuffle.

Tanya from Harrington Grove — probably the most experienced partygoer in the place — said she and her friends would go dancing every Friday and Saturday night before the pandemic hit. 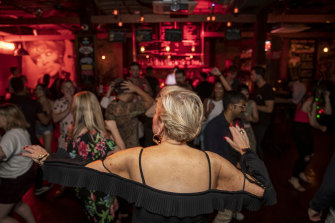 Tanya is 61 and from Harrington Grove. Credit:Cole Bennetts

Glenn, DJing at a bar for the first time in 10 months, said energy was building as restrictions eased. He predicted a glorious summer in Sydney.

"It's a pretty easy vibe to maintain, to be honest. Just give them the bangers," he said. 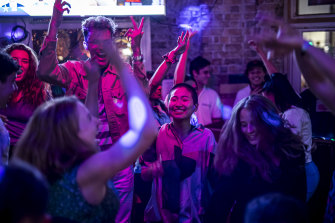 Punters collectively put their hands in the air at the Lord Gladstone Hotel .Credit:Cole Bennetts

Patrick from Brazil said it felt amazing to be out partying properly again.

"I was wanting this for so long," he said, before turning his attention back to grinding with a special new friend.

Things are not quite back to their former glory. Caps on numbers (and the accompanying caution of venues who don't want to be fined) have a restraining effect.

"The vibe is not quite what it was but the energy of people just wanting to dance just carries it through," said Soda Factory owner Graham Cornery.

"What we lose in numbers, we make up for in energy."

Bartender Michaela said people "will take whatever they can get". 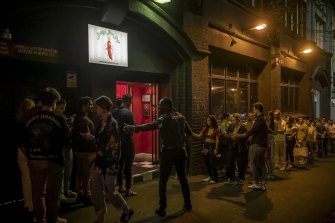 The crowd lines up at the The Soda Factory.Credit:Cole Bennetts

Not all late night venues are confident they've got a handle on the new reality. One Darlinghurst venue – which was said to have a full dance floor on Friday night — didn't want to admit the Herald.

Many of the city's long favoured dancing venues — Arq, the Imperial Hotel, the Prince of York — are yet to ramp up, feeling constrained by the restrictions.

Outside, the streets felt much like the good old days. The long queues, complete with the person angry they are being refused entry and the bouncer on a power trip. The ambulance racing down Oxford St, followed by a Lamborghini. The drunken screaming matches. 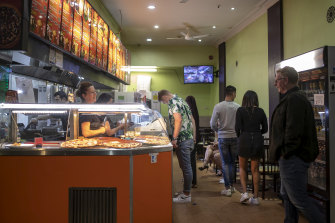 And the end-of-night frustrations were back too. The battle to get a taxi home, or opting for Uber with surge pricing in effect (try $42.67 for a 10-minute ride).

But, even with the ongoing restrictions and the struggle to get home after midnight, are Sydneysiders happy to be out dancing again?

12/12/2020 World News Comments Off on ‘It’s a constant battle, but the vibes are good’: Sydney dancefloors are revived
Lifestyle