Singapore: Stranded amid a worsening COVID-19 outbreak, Australian expats have been left scrambling to get their hands on Thailand’s left-over vaccine doses.

In what has been described as a vaccine lottery, expats received emails from the Australian embassy in Bangkok on the weekend informing them whether or not they had been successful in securing a shot of AstraZeneca from a limited batch.

Defying a ban on gatherings imposed due to the COVID-19 outbreak, protesters run from tear gas fired by riot police in Bangkok on Sunday.Credit:Getty Images

Those selected were given jabs in Bangkok on Sunday as police fired water cannons, tear gas and rubber bullets at demonstrators protesting the handling of the virus by Prime Minister Prayut Chan-o-cha’s Thai government.

While foreigners have access to doses elsewhere in the region such as Singapore, Malaysia and Indonesia, expats haven’t immediately been included in the general vaccination rollout in Thailand, where stocks have run low and less than 5 per cent of the population of 69 million people are fully inoculated.

An undisclosed number of doses were, however, provided by Thailand late last week to some overseas outposts including the Australian embassy but demand far outstripped supply.

“Due to the overwhelming demand and the limited doses available, unfortunately not everyone who applied this time has been successful,” the embassy told expats after registration for the vaccines closed on Saturday. 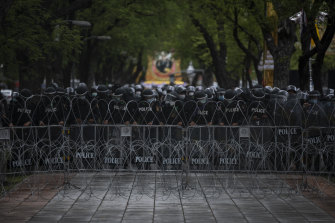 Police form a line behind razor wire in Bangkok.Credit:Getty Images

Australian officials had the previous week called for people whose health was at high risk to register for priority access to vaccines.

But rejected applicants called for transparency about who was chosen, complaining about an apparent “first past the post” selection process as one person put it.

It came as Thailand on Monday announced 11,784 new infections, a record for the fourth day in a row, as well as 81 deaths.

Bangkok is the epicentre of the outbreak but movement restrictions have now been expanded to 13 provinces in an effort to flatten the curve. 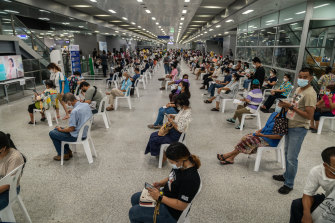 People wait in an observation area after being administered AstraZeneca at a vaccination centre at Bang Sue Grand Station in Bangkok.Credit:Bloomberg

Thailand’s problems have been compounded by AstraZeneca signalling a five-month delay – from December to next May – in completing its shipment of 61 million doses to Thailand to help vaccinate its population of 69 million.

AstraZeneca shots are also being manufactured domestically for Thailand and elsewhere in south-east Asia by Siam Bioscience, a company owned by King Maha Vajiralongkorn’s Crown Property Bureau, but production has fallen short of targets. Deputy Health Minister Sathit Pitutacha indicated last week it would only be able to produce about 6 million doses per month for local distribution, short of the 10 million per month that had been planned.

The shortage of vaccines explains why few have been made available to non-nationals, although it’s now been announced that foreigners over 75 years of age can be inoculated through the general program from Monday.

At least two countries, France and China, are vaccinating their nationals in Thailand themselves, with some of the 1 million Sinovac doses donated by the Chinese set aside for their 150,000 citizens there.

Thai-based Australian journalist Alan Morison said he couldn’t begrudge people seeking vaccines but he had opted to not to register for the “life-or-death lottery for expats” via the embassy.

“There are millions of Thais who need it more than I do – old Thais, disabled Thais, people who are obliged to keep working just to survive,” he said.

“The talk in the fish soup breakfast diner this morning was all about the local hospitals cancelling inoculations … these people will be angry when they learn expats are jumping the long, long queue.

“I hope the anger is directed where it should be – at their government.”

Under-fire Health Minister Anutin Charnvirakul has discussed temporarily limiting exports of Thai-made AstraZeneca, a suggestion met with alarm by the drug maker, which said it “is of critical importance” to neighbouring countries.

Thailand last week announced plans to provide AstraZeneca as a second shot for those who have had one dose of Sinovac in order to raise protection.

Determined to administer 10 million shots a month as promised, senior health official Opas Karnkawinpong said an agreement with Pfizer for 20 million doses of the American vaccine was being finalised on Monday and another 50 million may be ordered.

Sluggish vaccination jeopardises Prayut’s ambitions of opening the country to foreign tourists by October, having already welcomed them back to Phuket this month under the experimental “sandbox” model.

19/07/2021 World News Comments Off on Jab or no jab: Australians in Thailand in vaccine leftovers ‘lottery’
Lifestyle