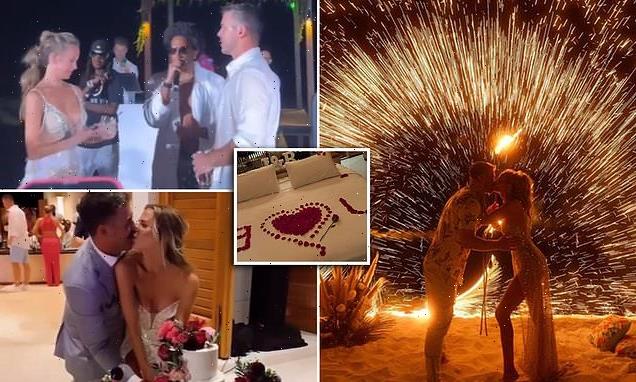 Par for the course! Golfer Brooks Koepka and model Jena Sims say ‘I do’ in stunning Turks and Caicos wedding before after-party on the beach where rapper Ludacris starred

Professional golfer Brooks Koepka and model Jena Sims were pictured partying it up following their wedding ceremony in Turks and Caicos on Saturday.

There were no photos from the ceremony itself, as Koepka, 32, and Sims, 33, requested no cellphones be used as they tied the knot on Providenciales island – but photos posted to Sims’ Instagram afterward showed her dancing next to her new husband in a short, frilly white dress as rapper Ludacris performed.

The couple was also seen jumping into a swimming pool together and cutting their wedding cake, as Sims showed off her glittery, strapless bridal gown.

The bed was decorated with a heart made of rose petals and the initials of their first names ‘J & B,’ which had also been carved into coconut drinks when family and friends first arrived on the island Thursday.

Sims also wore ‘J&B’ earrings for that event, while hanging out with friend and Sports Illustrated model Summer Wilson. 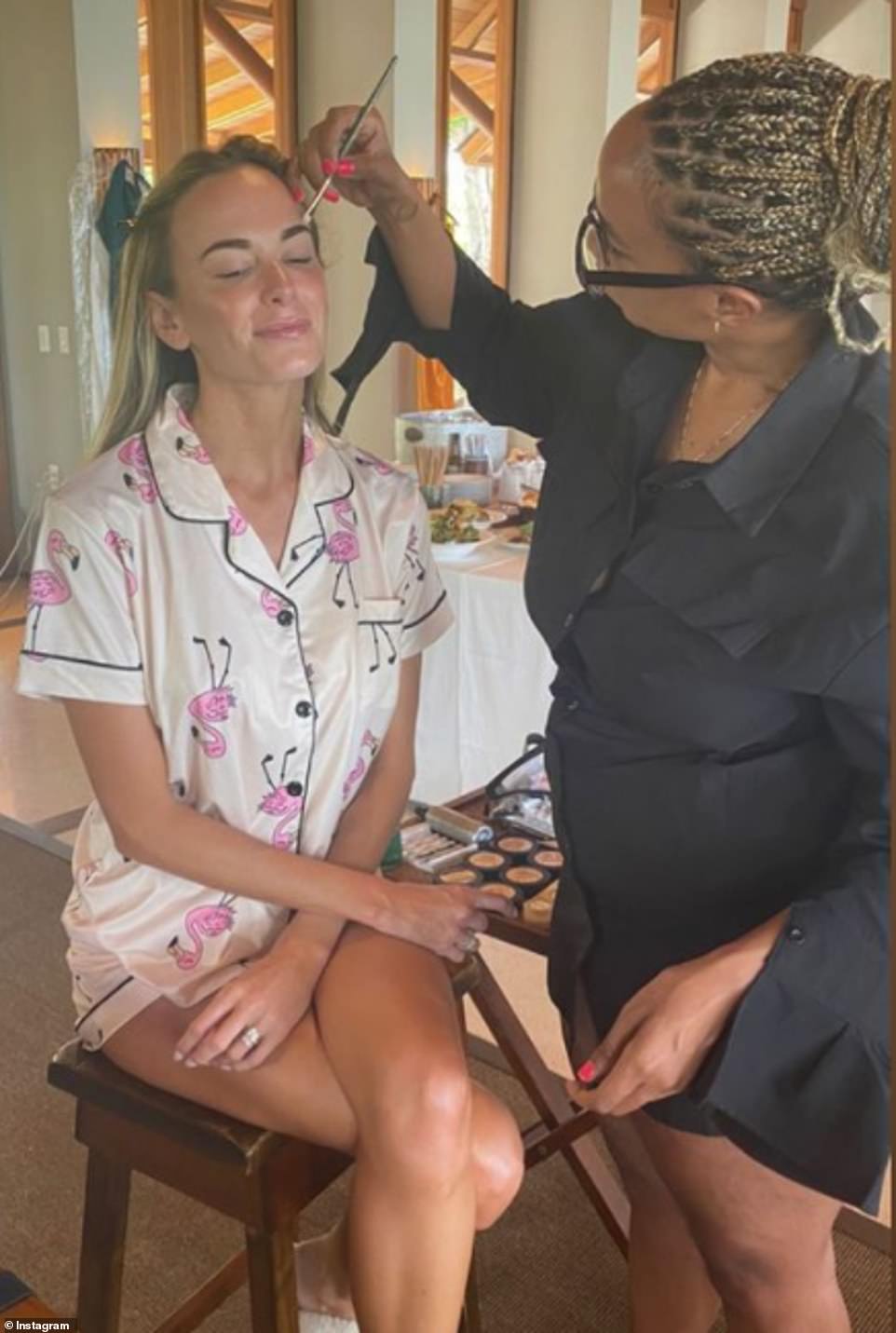 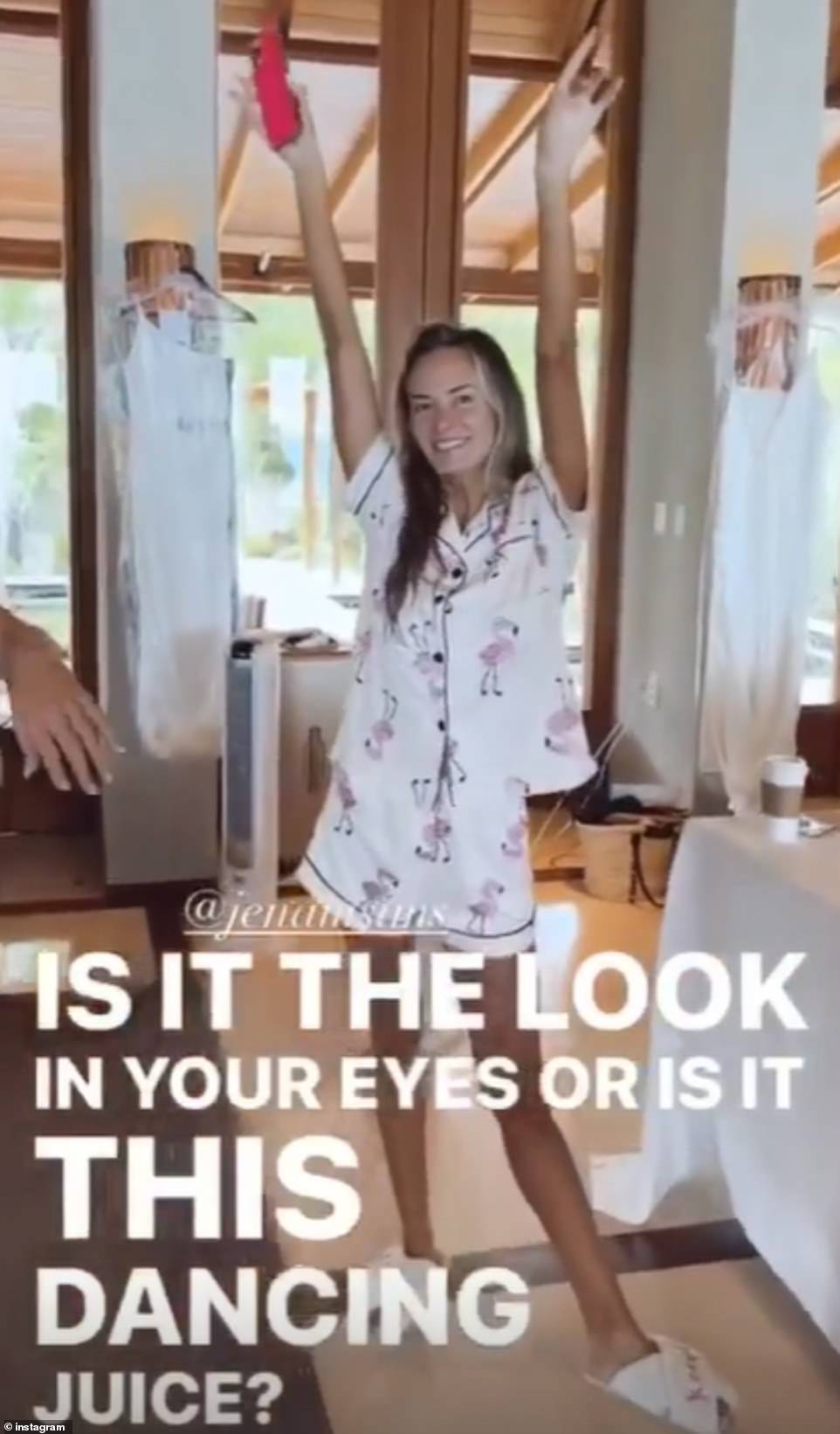 Sims seemed to have changed for the after-party on the beach, wearing a short, frilly white dress 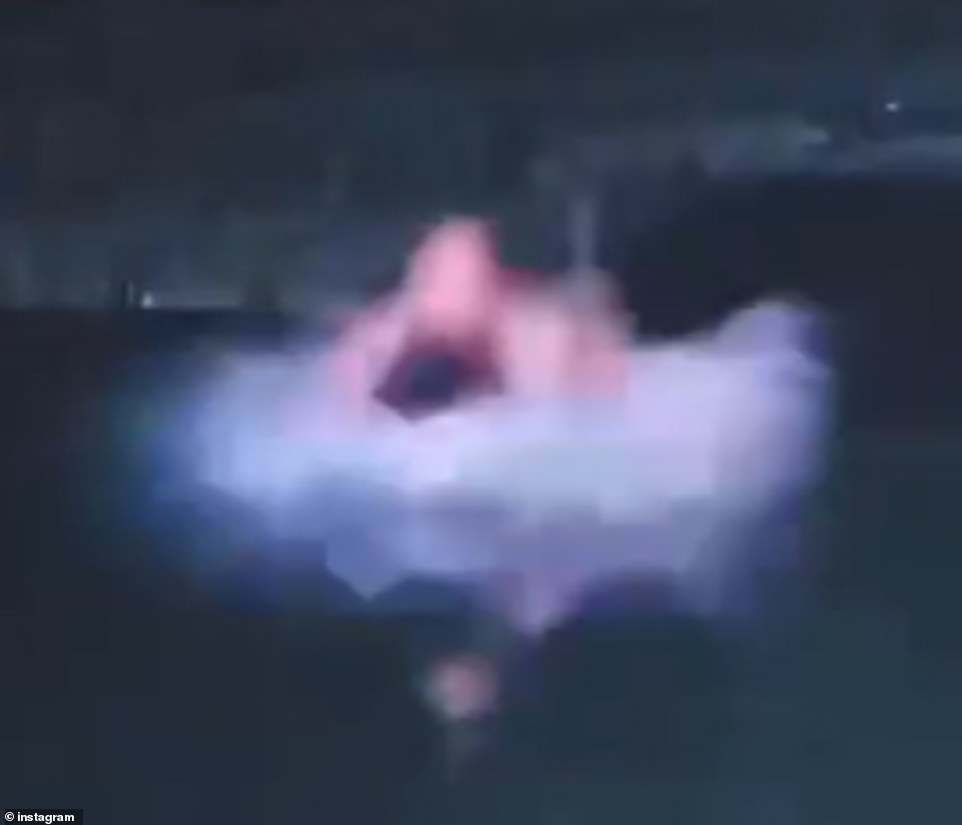 At one point in the night, the newly weds were pictured jumping into a swimming pool on the island

She made quite the entrance at Thursday’s bash wearing a glittering gold strapless gown by Berta, which featured a corset bodice, a slit that went all the way up to her hip and a sheer skirt.

She also donned strappy heels – which she soon ditched when she hit the sand – and wore her highlighted blonde hair up in a flouncy ponytail, revealing her customized earrings.

Her soon-to-be husband, meanwhile, opted to wear a yellow Hawaiian shirt and khaki pants to set himself apart from the other guests who had on all-white outfits.

Jena and Brooks had planned the beach bash with the help of the luxury event design company Sarah Renee Events, which was tagged in several photos.

Guests were treated to a coconut and rum bar upon their arrival and drank out of coconuts that were branded with ‘J&B’ in honor of the bride and groom.

The beach was decorated with string lights, lanterns, and wooden teepee frames adorned with fresh flowers. There were pillows, blankets, and floor tables for anyone who wanted to relax on the sand.

After the sunset, a fire dancer came out and put on an incredible show with the help of Jena and Brooks. A number of friends captured the moment the couple shared a kiss in front of the performer as embers from the fire lit up the sky like fireworks.

Sims shared a photo from the event to her social media that night, writing: ‘You set my soul on fire, Brooks Koepka. See ya at the alter in a few.’

Earlier in the day, the couple hosted a five-station lunch for guests with their own custom cocktails, including BK’s Booze and Jean and Juice — a nod to Jena.

They also had a DJ and massages at the main pool for people to enjoy.

It was beach attire, and Jena stunned in a white floor-length coverup with flowers that featured high slits on both of her legs, revealing her white bikini bottoms underneath.

She accessorized the look with dangly pearl earrings, white cork wedges, and a straw clutch, but it was her groom’s outfit that stole the show.

Brooks, who is sporting blond tips, wore a blue short-sleeve button-up and matching shorts that featured a custom print made up of sketches of their faces.

Jena noted in her Instagram Stories that they designed the shirt and short set with the North Carolina-based swim trunk brand Schwimmer.

Guests were given some down time in between the lunch and the beach party to hang out at their villas, swim in the pool, and relax. 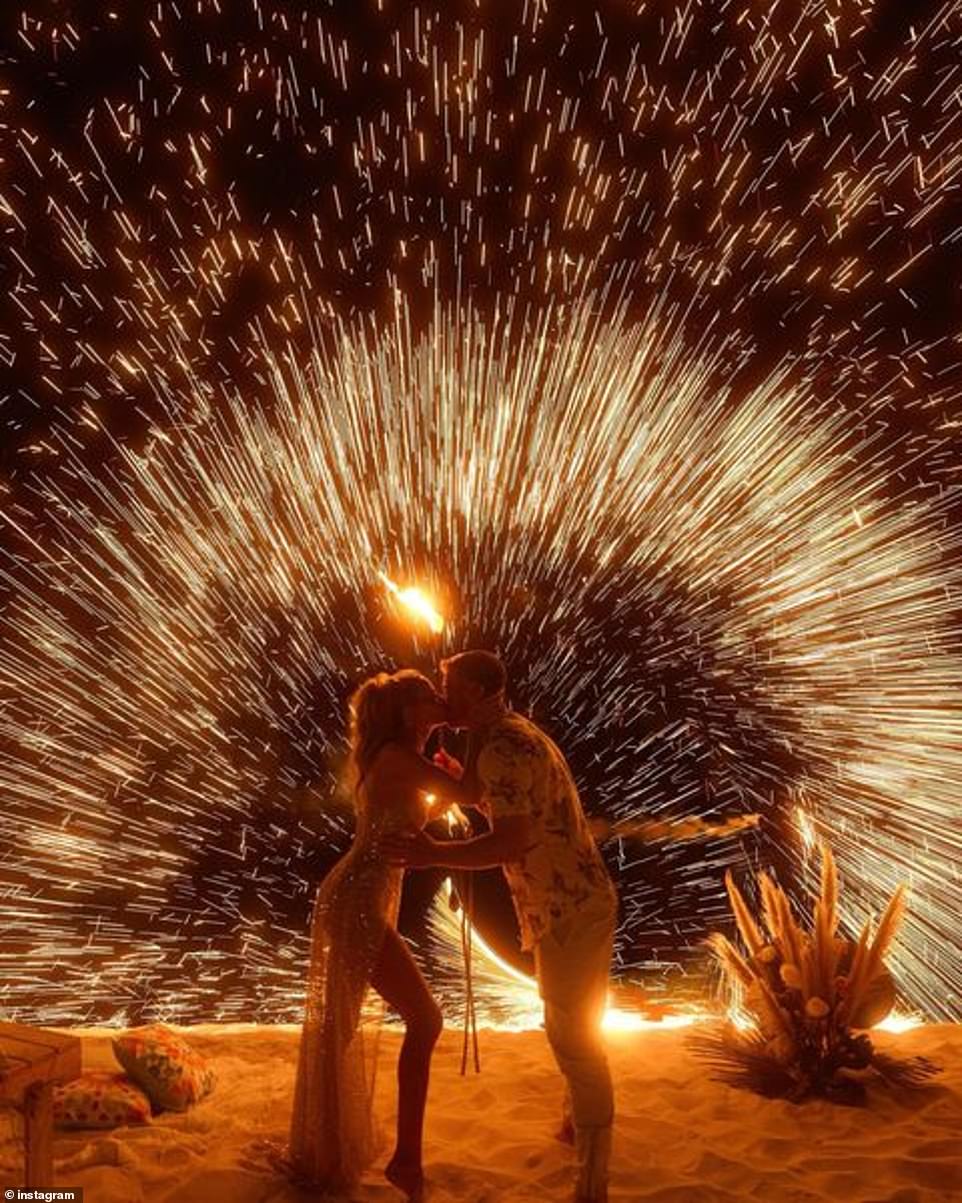 After the su, a fire dancer came out and put on an incredible show with the help of Jena and Brooks. A number of friends captured the moment the couple shared a kiss in front of the performer as embers from the fire lit up the sky like fireworks 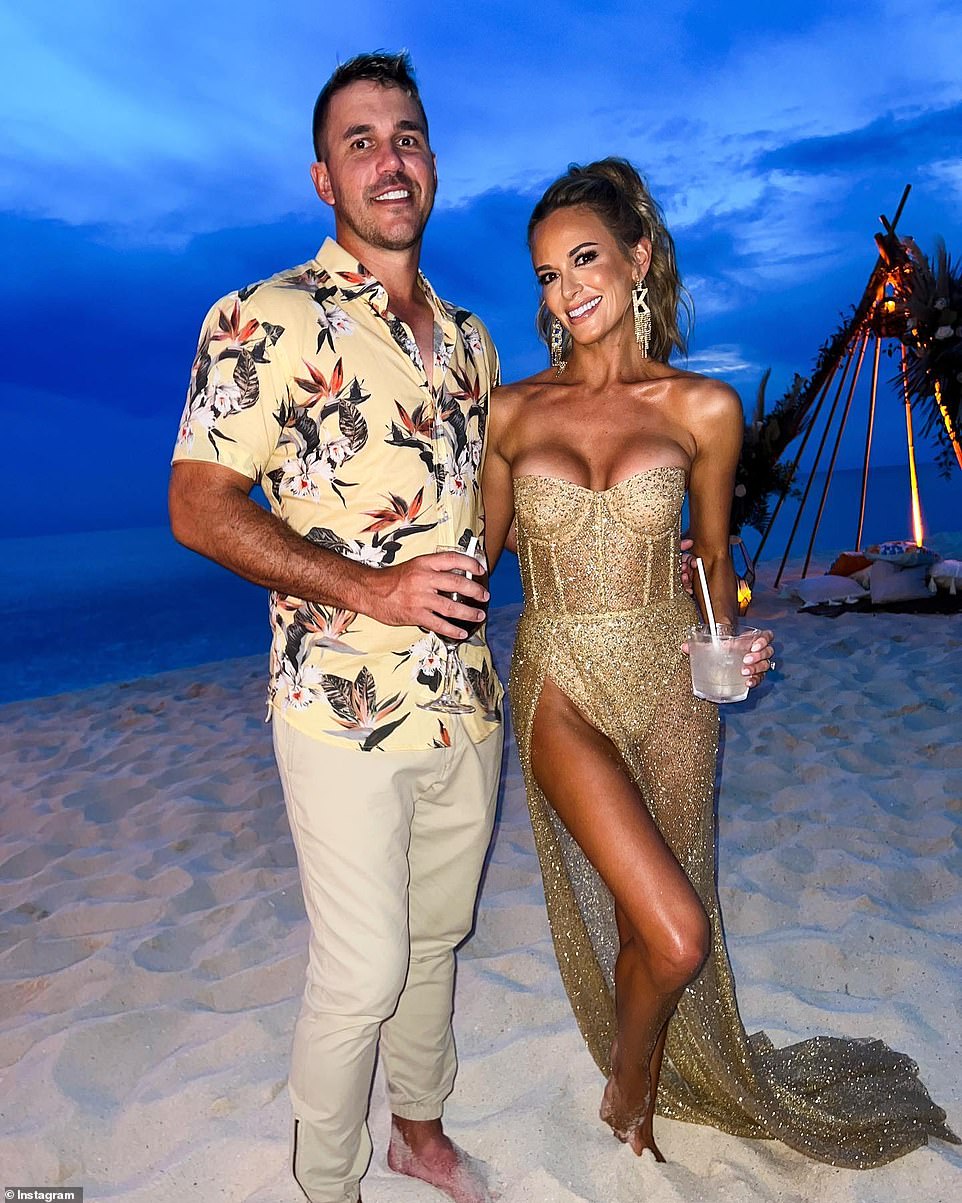 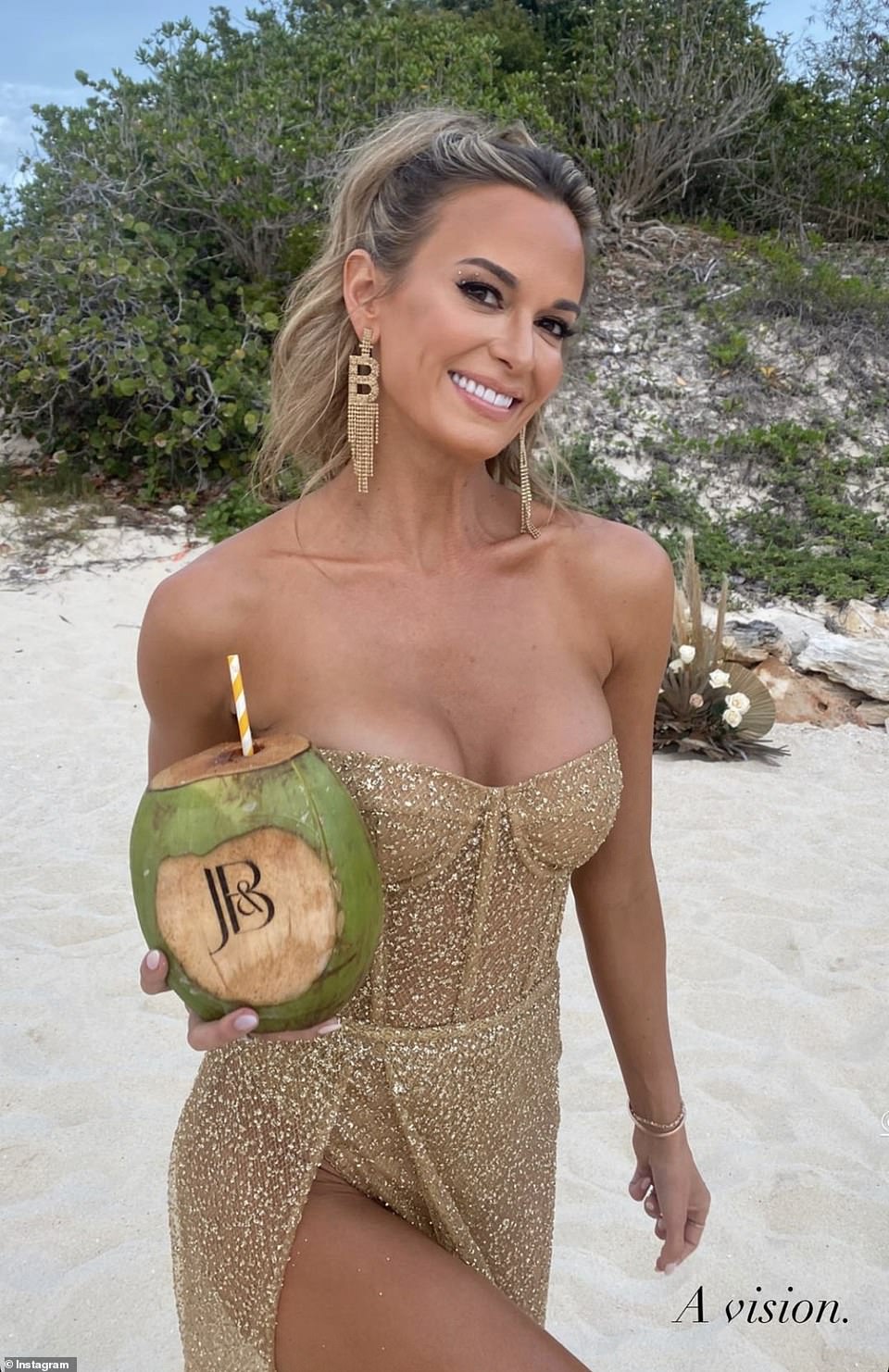 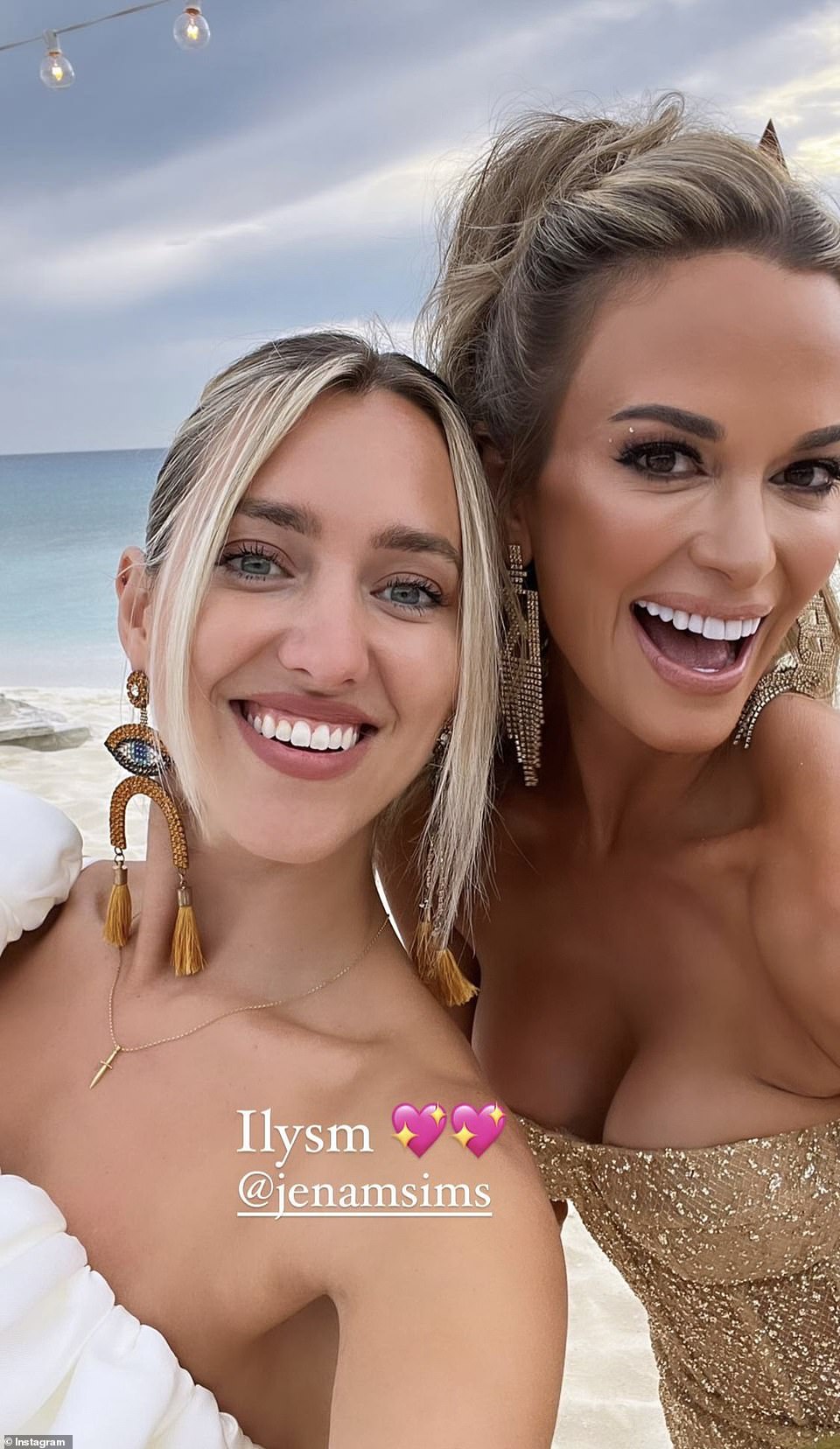 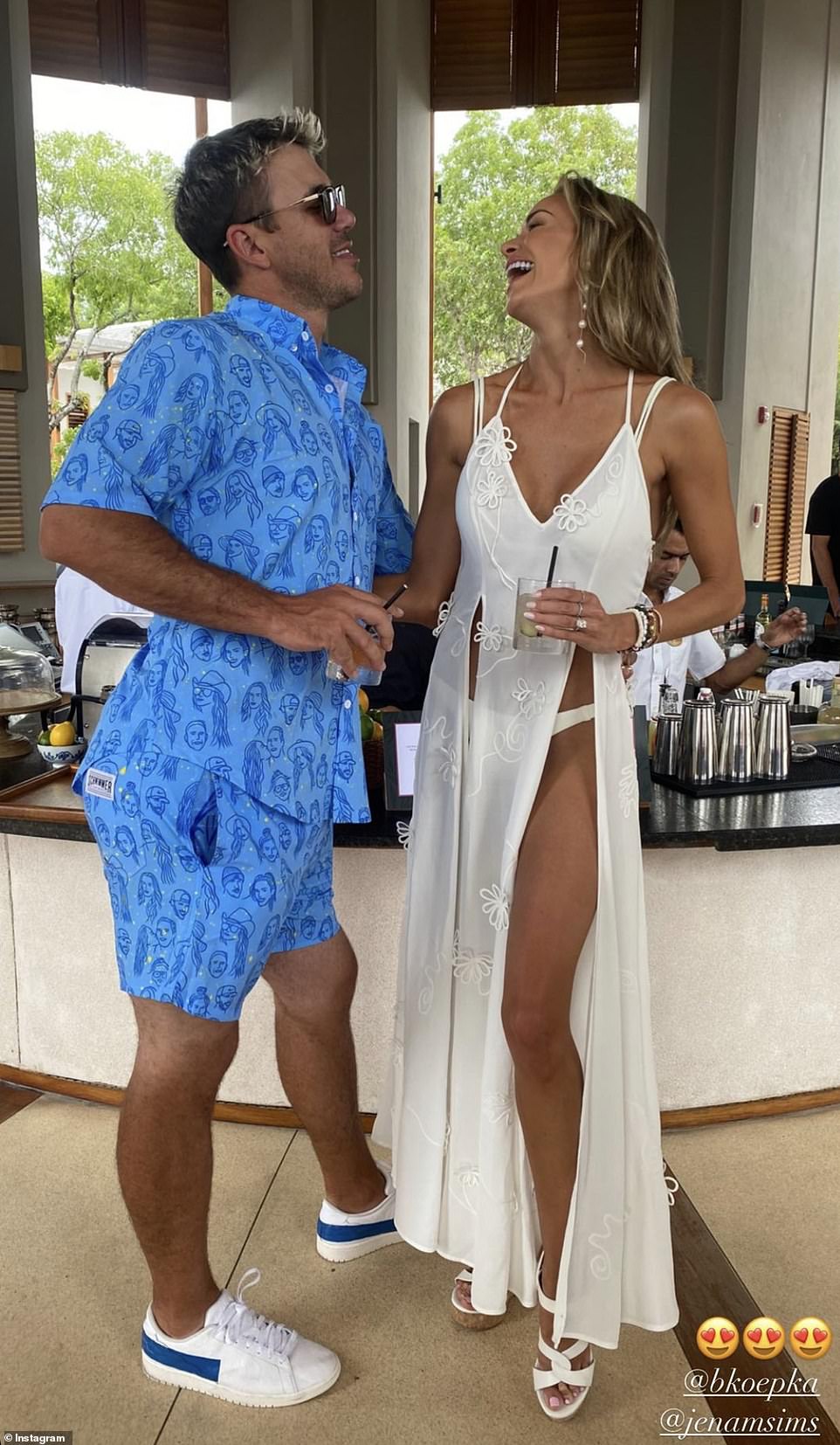 Earlier in the day, Jena and Brooks hosted a lavish lunch for guests who had already arrived

On Friday, the day of Jena and Brooks’ rehearsal dinner, she woke up and threw on a black crop top and matching bike shorts.

She shared a mirror selfie on her Instagram Stories, joking, ‘Black to mourn my last day as a single lady.’ She also showed off her Shades Club sunglasses, which had ‘Turks & Koepkas 06.06.22’ written on the side in gold.

The sneakers came in a custom floral box that had ‘J&B’ written in gold.

Brooks proposed to Jena in Florida in March 2021 after four years together.

The couple met seven years ago at the Masters tournament in Augusta, Georgia, which Jena told Golf Digest in 2019 was fitting because she is a Georgia native.

‘We met at the 2015 Masters. And that’s so special because I’m from Georgia, so it’s perfect,’ she said. ‘We were on Hole 7, which I don’t even remember, but he’s like, ‘Oh, I remember what you were wearing, where we were standing, everything.”

‘It was cool,’ she added. ‘We hadn’t dated since then. We were just friends at that point.’