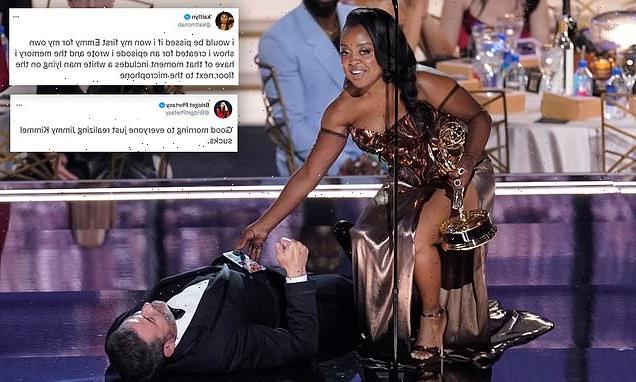 Jimmy Kimmel has been accused of utilizing white privilege after refusing to leave the stage during Quinta Brunson’s victory speech at the 2022 Emmys.

The late-night host laid on the ground beside the microphone onstage at the event as Brunson accepted the Emmy for Outstanding Writing for a Comedy Series. He is visible as the comedy writer and actress accepts the award.

After Brunson’s speech aired, Kimmel began to trend on social media as many believed he should have left the stage to honor Brunson’s performance.

‘White bro literally won’t move out of the damn way to let the black woman have her moment alone,’ one user wrote on Twitter.

Will Arnett played off the sketch that Kimmel had lost an earlier Emmy, went backstage and had several ‘skinny margaritas.’ Arnett is seen dragging Kimmel to the stage before announcing Brunson as the award-winner.

As the Abbott Elementary star walked onto the stage, Arnett moved Kimmel slightly out of the way so that Brunson could give her speech. 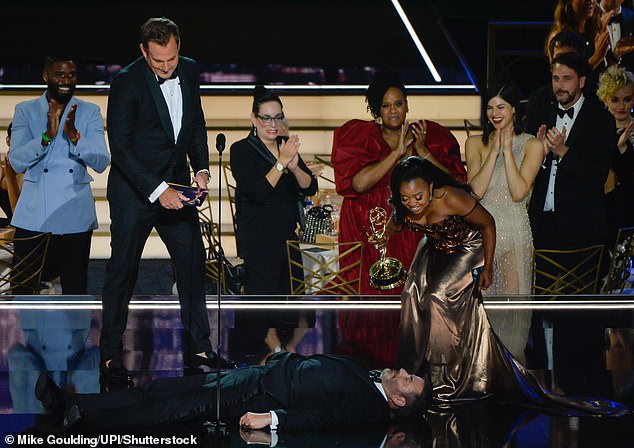 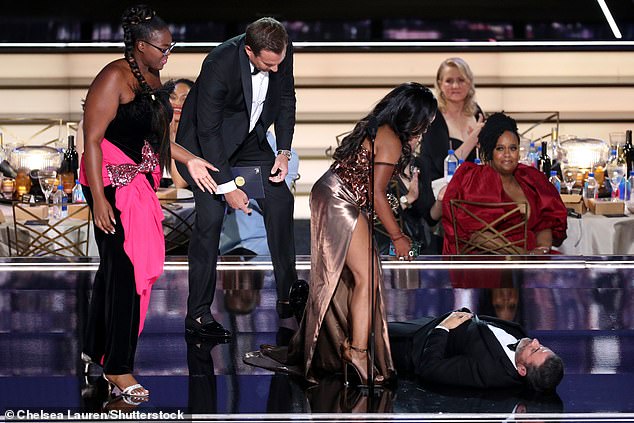 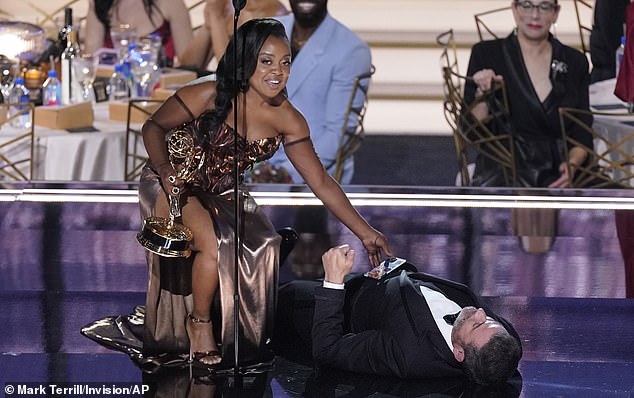 Brunson attempted to play off the sketch by trying to motion Kimmel to move: ”Jimmy, wake up. I won’ 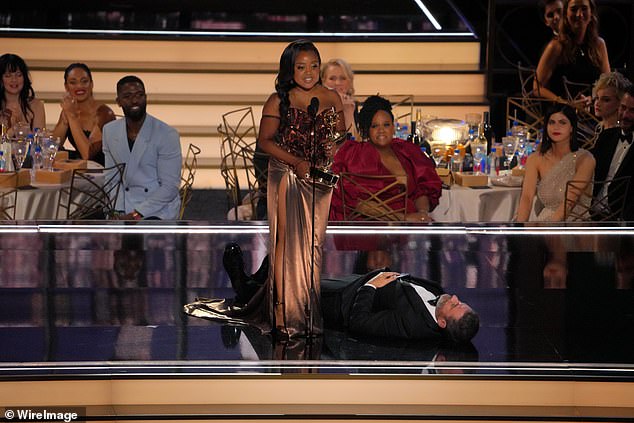 After giving Brunson a thumbs-up, he returned to a motionless state on the ground next to her. He can be seen at all times during her acceptance speech

Kimmel is seen giving a thumbs-up to Brunson before returning to his motionless state.

‘I know Jimmy Kimmel and I don’t know,’ Brunson said. ‘I felt like the bit didn’t bother me that much. I don’t know what the internet thinks, but I don’t know.

She noted that Kimmel has routinely given her praise for her role in the production of Abbott Elementary, adding that Kimmel said he thought the show would become ‘one of the greatest comedies of all time.’

‘I think in that moment, I was just really happy that it was Jimmy up there,’ she said.

‘I kind of consider him one of the comedy godfathers. I’m a huge fan of Will Arnett, so I was wrapped up in the moment.

‘Tomorrow, maybe I’ll be mad at him. I’m gonna be on his show on Wednesday, so I might punch him in the face. We’ll see what happens.’ 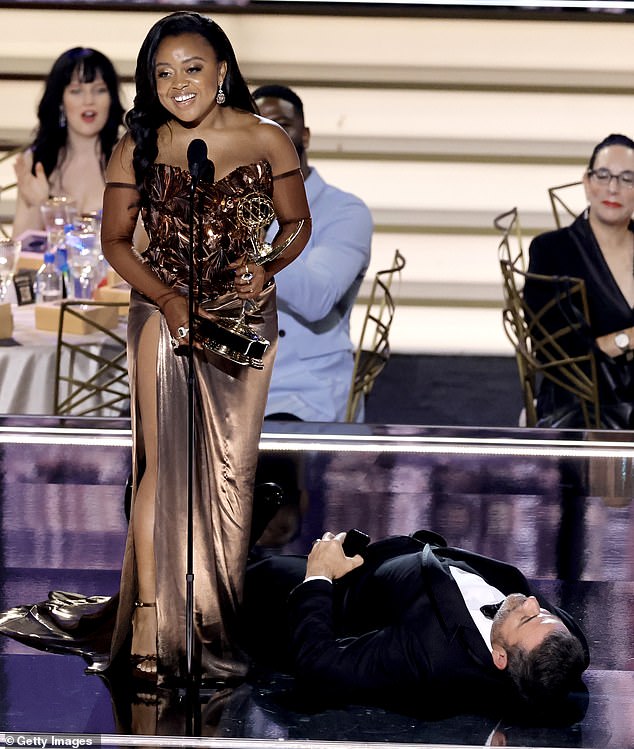 Brunson, who will appear on Kimmel’s show on September 14, said she ‘might punch him in the face’

Though Brunson took the time to make jokes and even show appreciation toward Kimmel, Twitter went on the offensive against the late-night host.

Entertainment news editor for Teen Vogue Kaitlyn McNab was among those users: ‘I would be pissed if I won my first Emmy for my own show I created for an episode I wrote and the memory I have of that moment includes a white man lying on the floor next to the microphone.’

Another user named Connor Perrett added: ‘Jimmy Kimmel laying on the floor while Quinta has her moment is extremely irritating.’

Other tweets emphasized Brunson’s first-ever Emmy, including one which read: ‘Quinta Brunson deserved better than giving her acceptance over Jimmy Kimmel’s ‘dead’ body.’

The users that weren’t celebrating Brunson’s performance took to lashing out against Kimmel altogether, including some who expressed confusion over the bit.

‘Why was Jimmy Kimmel still lying on the stage during Quinta’s acceptance speech?’ one user questioned. ‘It was weird, the whole skit, weird.’

‘Y’all dragging Jimmy Kimmel and it’s what he deserves,’ another said.

To complement her first Emmy, Brunson later returned to the stage to accept another Emmy for Best Lead Actress in a Comedy Series. 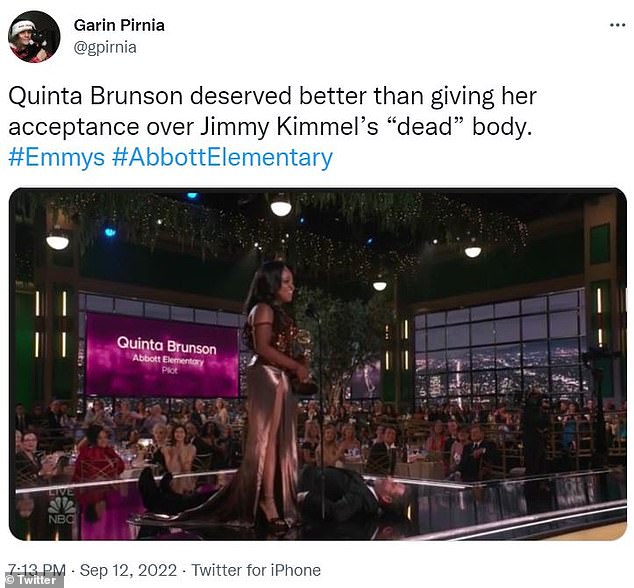