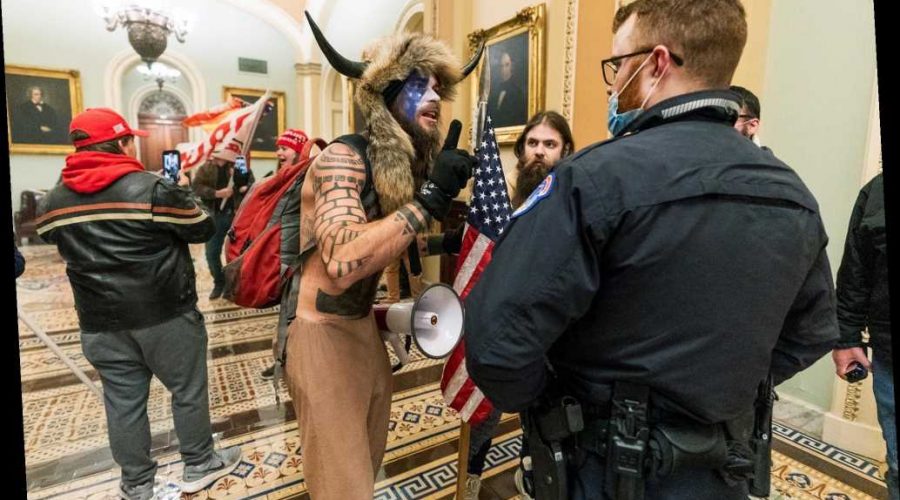 Slain Capitol Police officer always dreamed of being a cop

Donald Trump Jr.: ‘We are living Orwell’s 1984’ after dad outed from Twitter

Justice Department officials announced the arrests Saturday of three of the highest-profile accused rioters from last week’s Capitol siege — including the shirtless, fur-wearing, horn-hatted invader who went viral after turning the Senate dais into a personal throne worthy of Conan the Barbarian.

Jacob Anthony Chansley called the FBI’s Washington office Thursday and later turned himself in to police, the feds said.

“Chansley said that he came as part of a group effort with other ‘patriots’ from Arizona, at the request of the President that all ‘patriots’ come to DC on January 6, 2021, the DOJ said.

Chansley, 33, who calls himself the “QAnon Shaman,” was only the most outlandish-looking of the many hundreds of pro-Trump extremists who breached the Capitol on Wednesday, and who are now being rounded up in arrests across the country.

The feds also announced the arrests of Adam Christian Johnson, 36, seen in a viral video allegedly carrying off House Speaker Nancy Pelosi’s lectern, and of a West Virginian lawmaker who had helpfully — for investigators — livestreamed himself shouting, “Derrick Evans is in the Capitol!”

Thanks in large part to images passed around by the rioters themselves that day, and which now flood the Internet, by Saturday prosecutors had filed at least 17 cases against named suspects in federal district court, alleging such serious crimes as violent entry and assaulting federal officers. At least 40 other cases in the District of Columbia Superior Court allege lesser charges, including curfew violations and non-violent gun crimes. They face a variety of offenses, including assaulting police officers, entering restricted areas of the U.S. Capitol, stealing federal property and threatening lawmakers.

Prosecutors said additional cases remained under seal. Mark Warner, a Democrat who is the incoming Chairman of the Senate Intelligence Committee, on Saturday called on mobile carriers to preserve social media content related to the insurrection, which left five people dead, including a Capitol policeman.

Johnson, the Parrish, Fla. man allegedly depicted in a viral photo carrying off Pelosi’s lectern, was busted in his home state on Friday, and is being held in Pinellas County Jail on a federal warrant after US Marshals picked him up, ABC News reported.

He was charged with one count of knowingly entering or remaining in any restricted building or grounds without lawful authority; one count of theft of government property; and one count of violent entry and disorderly conduct on Capitol grounds, the feds said.

Johnson is a stay-at-home-dad who lives with his wife and their five children, The Bradenton Herald reported.

The lectern was found the day after the siege, in a corridor of the Senate wing, off the rotunda, the feds said. It has a value of “more than $1,000,” according to authorities, who cited the House of Representatives’ curator. Evans, 35, of West Virginia, a freshman member of the West Virginia House of Delegates. He allegedly streamed himself entering the Capitol, with the mob, on his Facebook page, shouting as he crossed the threshold, “We’re in, we’re in! Derrick Evans is in the Capitol!”

Charged with knowingly entering or remaining in a restricted building, violent entry, and disorderly conduct, he stepped down from the House of Delegates on Saturday.

“I hope it helps to begin the healing process,” he said in a letter of resignation, “so we can all move forward and come together as ‘One Nation, Under God.” His lawyer has insisted he was “not part of the main body” of rioters and did nothing wrong during the breach.

Among those whose arrests were announced Saturday, the horned crown for outlandishness still belongs to Chansley.

“This individual carried a spear, approximately 6 feet in length, with an American flag tied just below the blade,” the feds said of Chansley, 33, also known as Jake Angeli, who was busted Saturday.

Chansley is an avid Trump supporter wears the same horned getup while spouting conspiracy theories at the state capitol in Phoenix, according to the Arizona Republic.Rousing QAnon supporters at a February 2020 Trump rally in Phoenix, Chansley told the crowd “The snowball has been rolling, and it’s only getting bigger. We’re the mainstream now,” the outlet reported.

He was charged with knowingly entering or remaining in any restricted building or grounds without lawful authority, and with violent entry and disorderly conduct on Capitol grounds.

“The fact that we had a bunch of our traitors in office hunker down, put on their gas masks and retreat into their underground bunker, I consider that a win,” Chansley, identified as Angeli, had told NBC News after the riot.

He has said his beliefs are based on Internet research of groups he believes control the world, such as the Illuminati.

“At a certain point, it all clicked in a way,” he told the Republic. “Oh, my God. I see now the reality of what’s going on.” Also Saturday, the mayor of Gravette, Arkansas issued a public statement after one-time resident Richard Barnett was busted after being snapped sitting in Nancy Pelosi’s office, his dirty work boot atop her desk. “It’s a shame something like this is what puts you in the public eye,” Mayor Kurt Maddox told local Fox24. “This is not the city of Gravette, this one person is not who Gravette is and not who the people are.”

Resident Joseph Cowan told the station: “We are a bunch of good people [and] we just had that one spoiled egg I guess who caused a lot of trouble for Gravette now.”