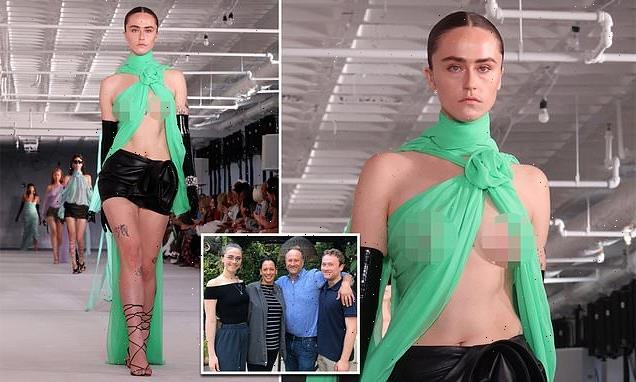 Emhoff, who is the daughter of US second gentleman Doug Emhoff and first wife, Kerstin Emhoff, wore a barely-there mint blouse and a black leather lambskin miniskirt with black gloves for the outing.

The outfit appeared to be a deliberate choice, and there’s no suggestion the bared boobs were a wardrobe malfunction.

Along with the 23-year-old, Gurung sent models to show off his outfits in the shadow of the United Nations wearing an explosion of sheers and colors as an ode to the misfits of the world who are ‘often watched and monitored, scrutinized but unseen.’

The designer told The Associated Press he discovered an industrial space in the former home of the Japanese consulate while on a bike ride on Manhattan’s East Side. He turned it into a white runway that made his revealing metallics, bondage looks, and neon brights pop.

‘I wanted to create a space for this particular show where we felt what we are feeling in the culture itself: Kind of unsure politically, culturally, but we still want to be hopeful, want to be optimistic,’ he said. ‘I needed to be near the reminder of the UN that our job in fashion is not done until we are alert and vigilant.’ 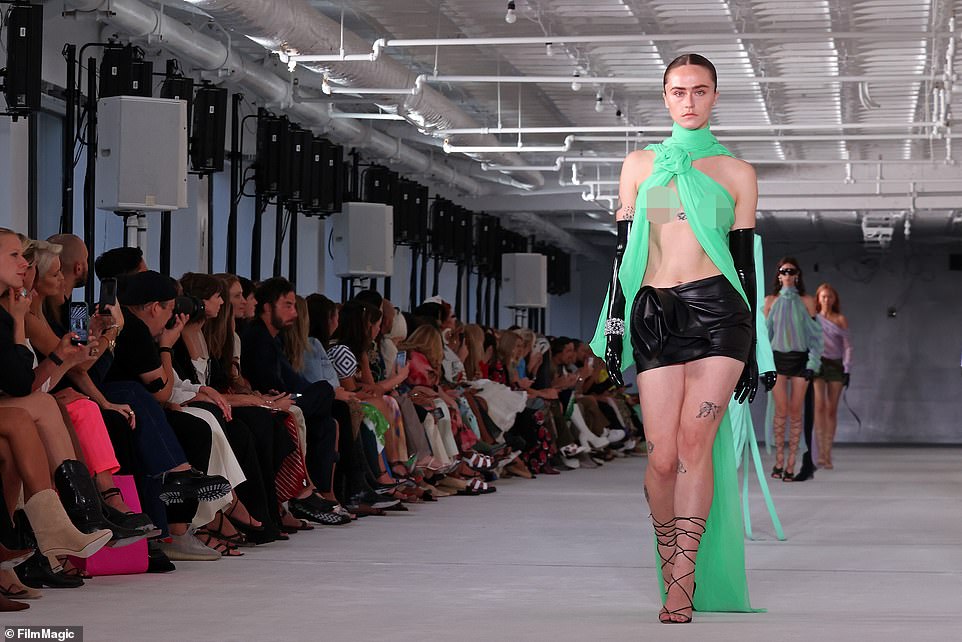 WHO LEFT THE NIP’ OUT: Ella Emhoff – the stepdaughter of US Vice President Kamala Harris – suffered a nip slip while walking the runway during the S/S 2022 Prabal Gurung fashion show during New York Fashion Week on September 10, 2022 in New York 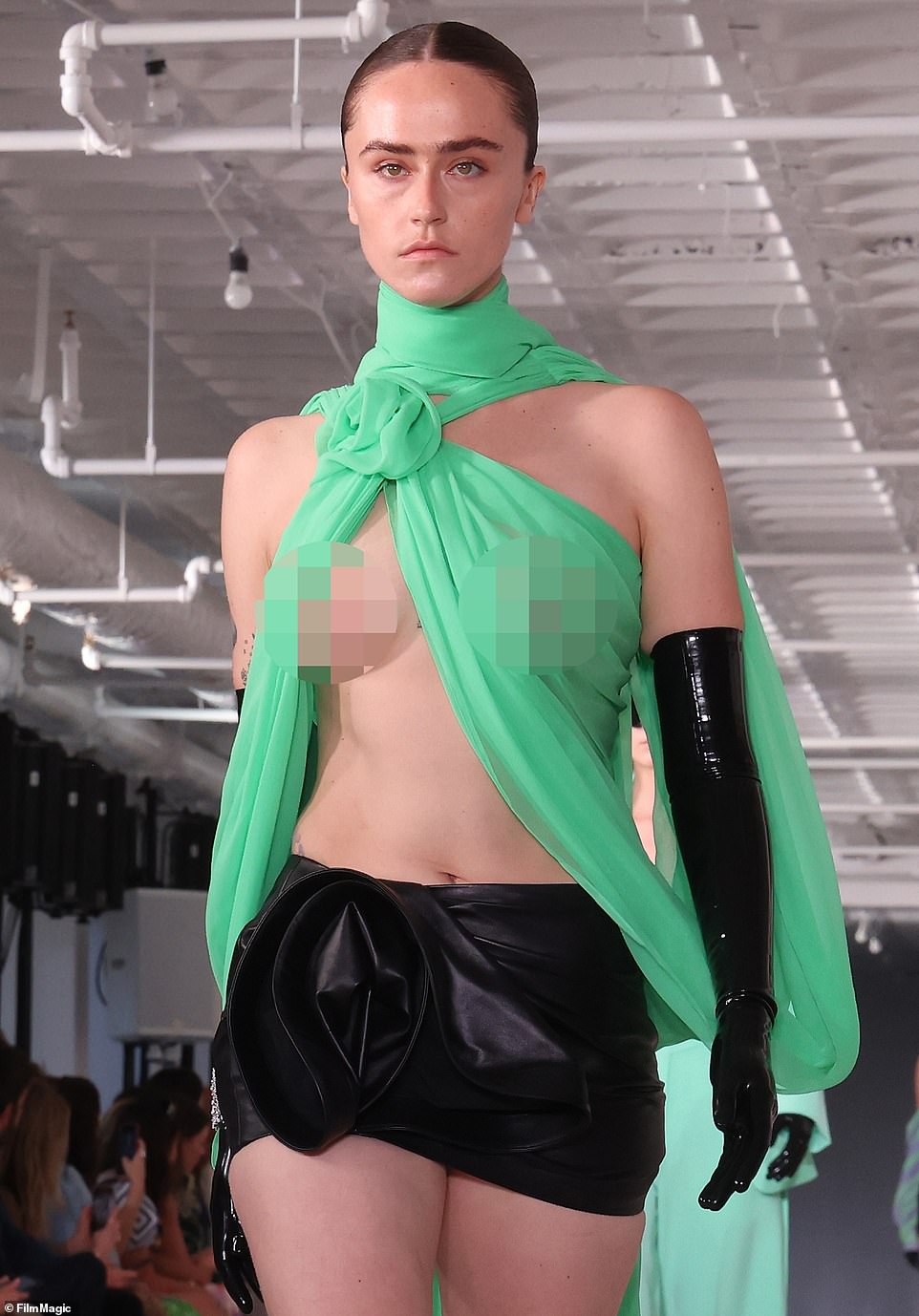 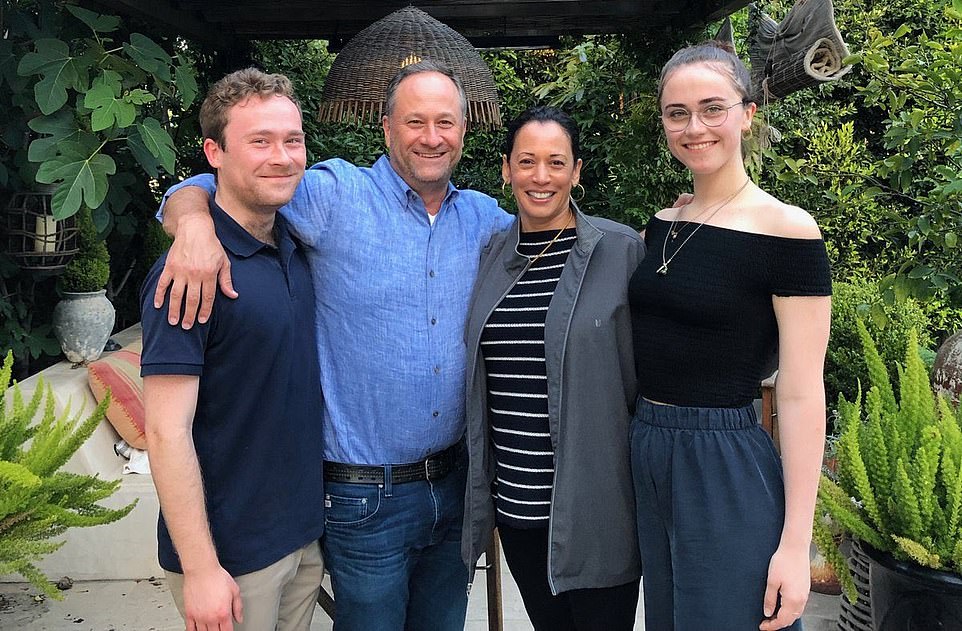 Ella is the daughter of US Second Gentleman Dough Emhoff, who is married to VP Harris. Pictured from left to right: Cole Emhoff (Ella’s brother), Doug Emhoff, Kamala Harris and Ella Emhoff 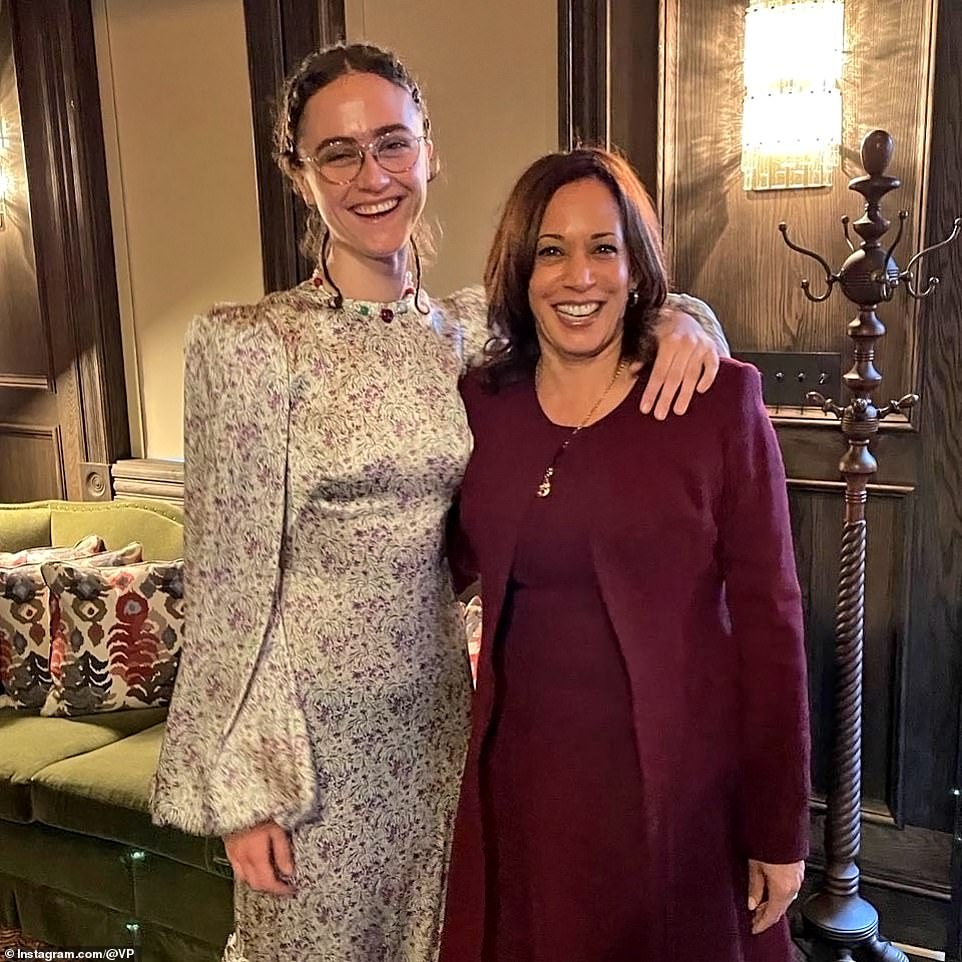 Ella is a graduate of the Parsons School of Designs and was signed as an IMGS Models in January 2021. Pictured in May 2021 with stepmother and VP, Kamala Harris 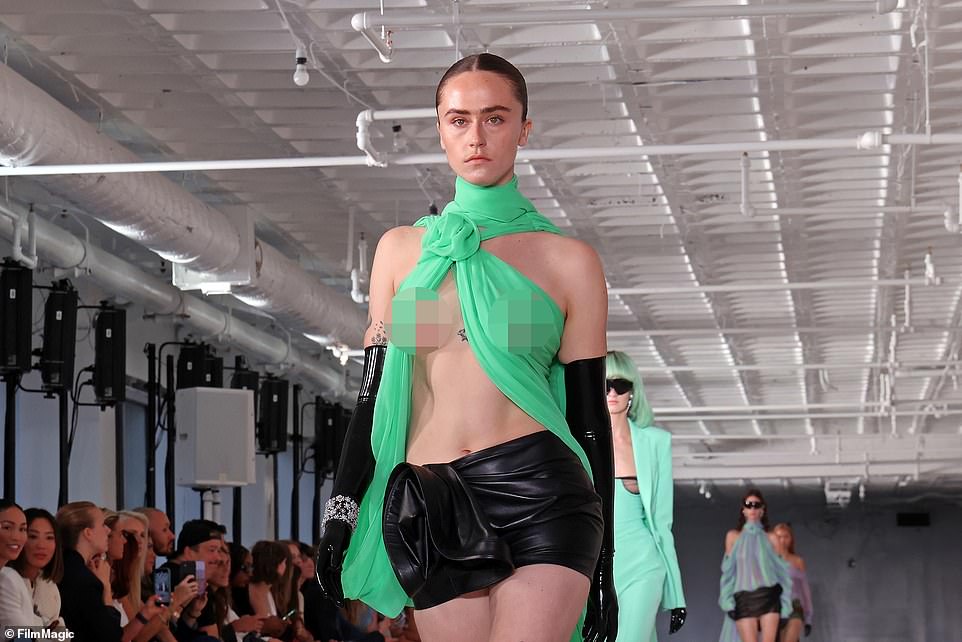 Ella’s fashion malfunction was noticeable during Gurung runaway in the shadow of the United Nations, where models wore an explosion of sheers and colors as an ode to the misfits of the world who are ‘often watched and monitored, scrutinized but unseen’ 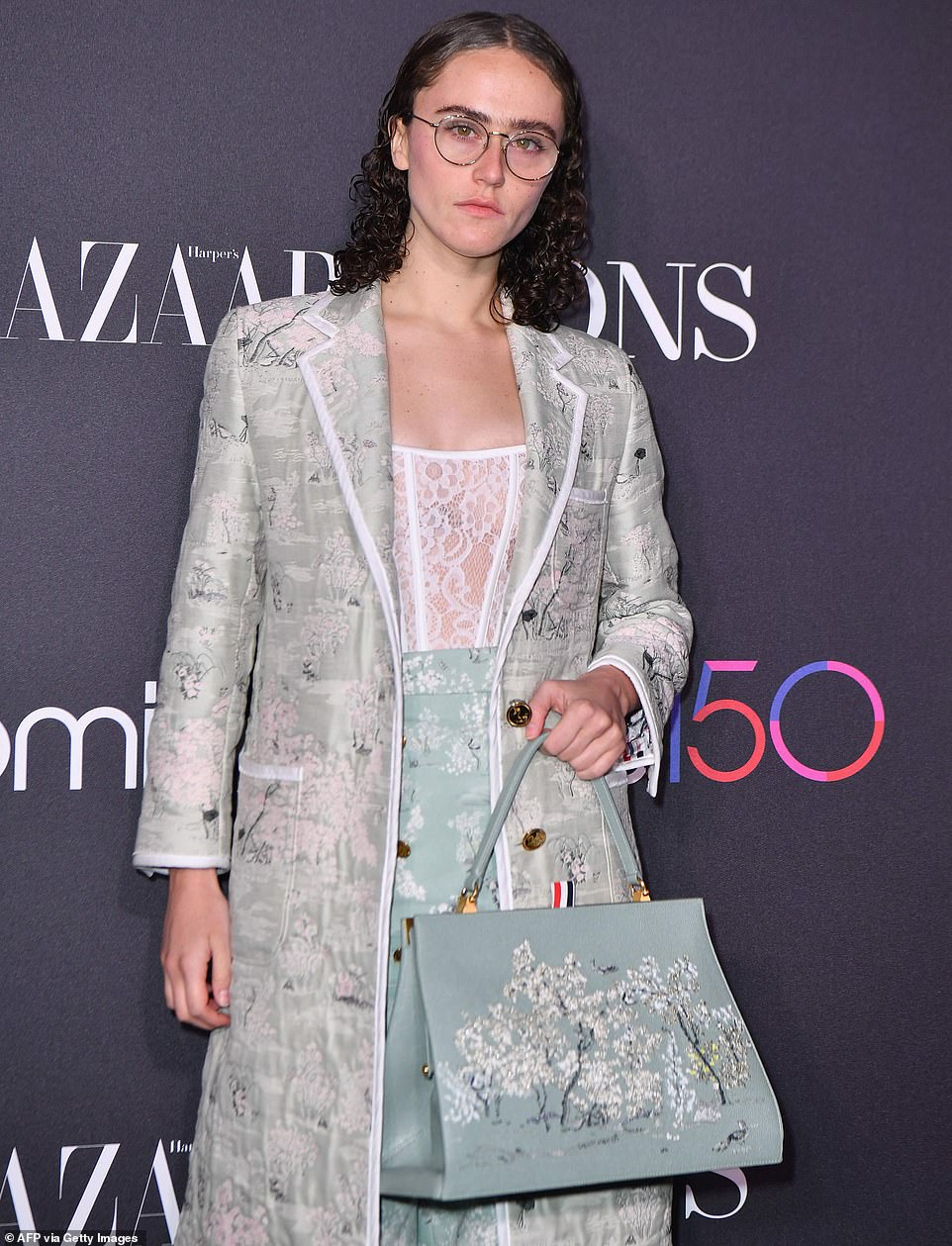 Meanwhile, Ella, 22, skyrocketed into fashion fame when she wore a Miu Miu tartan coat with crystal-encrusted shoulders and a wide collar over a burgundy Batsheva dress during President Joe Biden’s inauguration in January 2021.

She then made her runway debut at the Proenza Schouler show during New York Fashion Week in early 2021, after signing with modeling agency IMG.

At the time, IMG president Ivan Bart gushed that she represented ‘authenticity,’ telling the New York Times, ‘Ella communicates this moment in time. There’s a cheekiness and a joy she exudes.’

Later that year, Ella also released her own knitwear collaboration with Batsheva, which sold out in minutes.

She also starred in her first Vogue shoot, celebrated her graduation from Parsons School of Design, and walked in Balenciaga’s show in Paris throughout 2021.

Ella has gained a lot of attention online for not shaving her armpit hair, previously posing for crochet brand Memorial Day while showing off her unshaved pits. 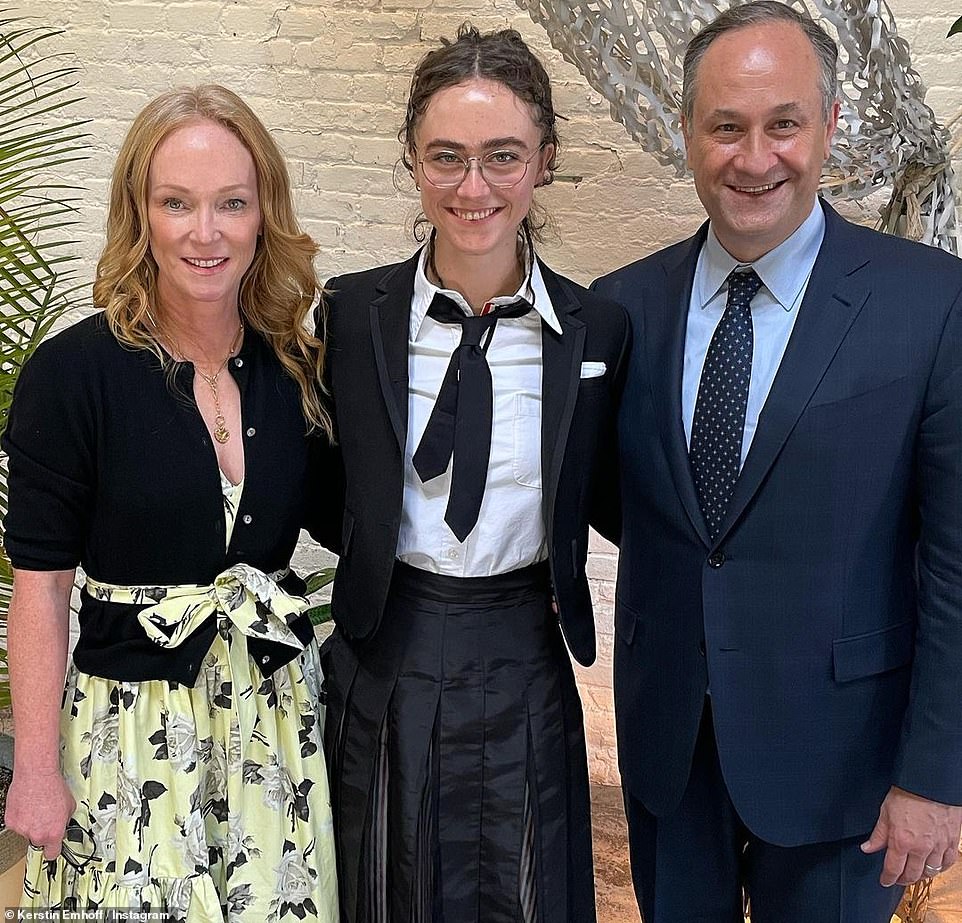 Ella, who has already featured in a Vogue shoot in the past and featured in Balenciaga’s show in Paris in 2021, is the daughter of Dough Emhoff’s first marriage with Kerstin Emhoff before the couple divorced in 2008

The first gentleman’s daughter grew up in Los Angeles, California, but after heading to New York for school, she fell in love with the Big Apple.

‘I wasn’t expecting to stay after college, but after creating a really strong community and life here, I couldn’t leave,’ she told Vogue Runway.

‘What initially drew me to New York was the freedom that I felt people had here, especially in the way people dress and present themselves.

‘I always felt a little embarrassed in LA expressing myself in the way that I wanted. Except for when I was in middle school. I really went for it then.

‘There’s so many amazing people doing really cool things [in the city]. It’s hard to not want to surround yourself with it at all times.’