Flying for the holidays in the next few days or weeks? You’re not alone.

According to data from the online booking platform Hopper, about 54 million people are expected to catch flights between Dec. 18 and Jan. 3.

The data also shows that Thursday and Friday this week, and the next two Mondays (Dec. 26 and Jan. 3), will be among the busiest travel days of the season.

Here’s what you can expect as you head to the airport, and tips for how to make your travel experience smoother. Keep in mind: weather is probably going to be a big factor this week as record-cold temperatures and strong storms sweep across much of the country.

Flight delayed or canceled? What you need to know and what airlines owe travelers.

If your flight is delayed, you may be eligible for compensation from your airline

Which airports will be busiest for the holidays?

According to Hopper, these will be the busiest airports to fly through between now and the early days of 2023:

Historically, many of these airports also tend to suffer a relatively high share of delayed flights around the holidays, according to a USA TODAY analysis.

A greener way to travel: Understanding how sustainable aviation fuel can help airlines be more eco-friendly 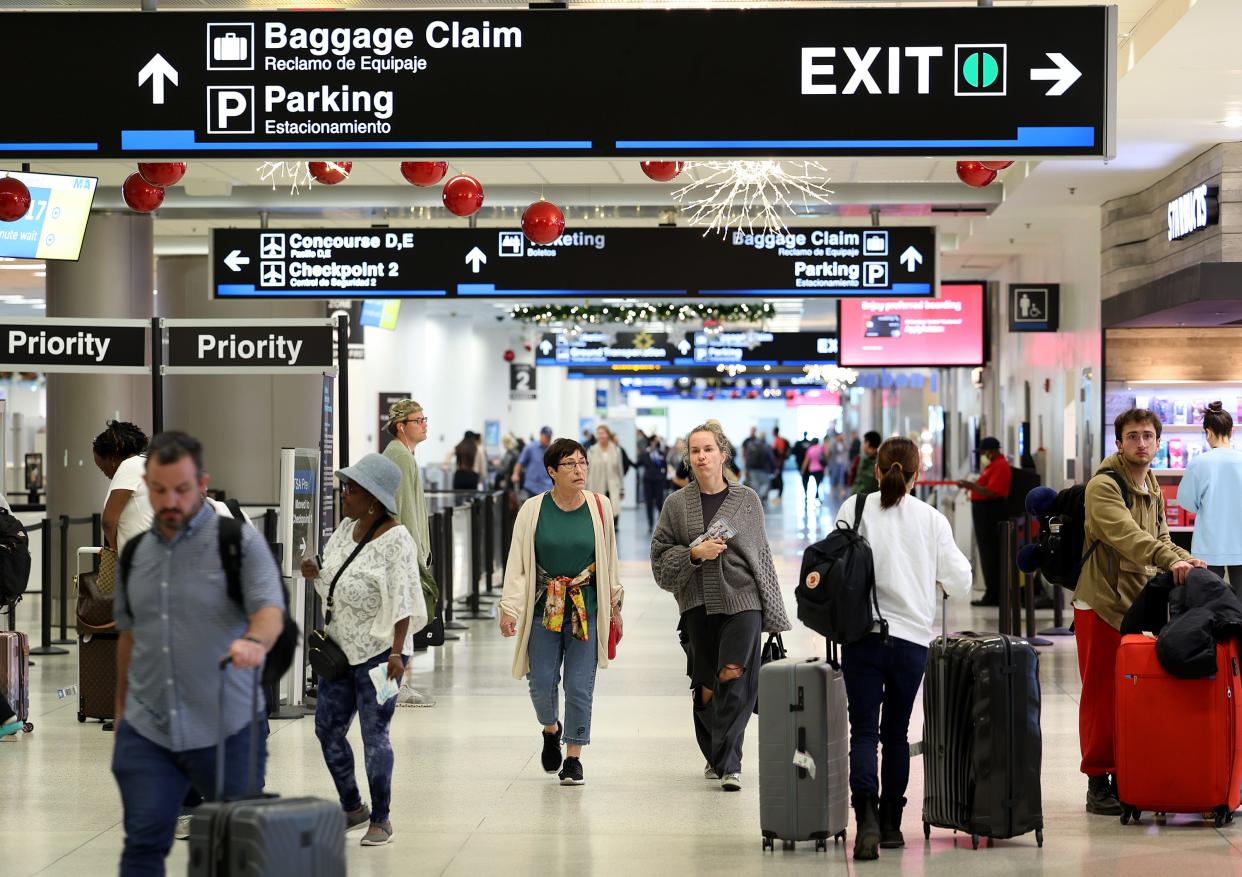 When will my airport be busy?

Different airports load their departures at different times, so lines will ebb and flow throughout the day. According to Hopper, 8 a.m. to 12 p.m. is busiest at some airports, while 4 p.m. to 8 p.m. is the peak at others.

Real ID update: Implementation deadline delayed (again). You can keep traveling with an old ID until 2025.

Here’s what the data shows:

No matter when you’re traveling, it’s a good idea to leave yourself extra time to get to the airport and clear security. If you’re traveling during your airport’s peak demand period, you won’t want to cut it too close.

What’s the weather supposed to be like for holiday travel?

This week is expected to see some severe weather across much of the country, and snow and frigid temperatures are forecast in many places starting Wednesday through the end of the week. That could result in flight delays and cancellations, depending on when and where the most extreme weather hits.

If you’re planning to fly later in the week, it’s a good idea to sign up for alerts from your airline in case there are any changes to your flight.

If your travel plans are at all flexible, it might be worth considering flying out sooner, before the worst of the weather hits.

Getting through airport security quickly: What is TSA PreCheck and how much it costs

Hopper suggests that travelers buy trip insurance, especially this time of year, when weather can cause disruption.

Experts also say it’s a good idea to research alternatives in advance in case something does go wrong with the itinerary you originally booked.

Airplane mode: Experts say it’s safer to leave your cell reception off when you fly

And as always: Pack your patience. The airports promise to be crowded this season, but if you leave yourself enough time and are friendly to those who are trying to help you along your journey, you won’t have as much reason to stress.

21/12/2022 World News Comments Off on Keep an eye on your Christmas flight: Here's what flyers should expect this week
Lifestyle