LOUISVILLE, Ky. — In the continuing fallout from the death of Breonna Taylor, shot by police during a late-night raid on her apartment in Louisville, the office of Kentucky attorney general Daniel Cameron said Monday his office would release grand jury transcripts related to the case, after one of the grand jurors petitioned a judge to allow the records to be made public. Cameron also said his office would not object to the juror speaking publicly about the deliberations.

Last week, Cameron announced that the grand jury had declined to bring charges for Taylor’s death against any of the three officers involved in the raid last March. One of the three was indicted on charges of “wanton endangerment” for allegedly firing into an adjacent apartment.

The unidentified juror said Cameron, whose office elected to take over the case directly, used the grand jury “as a shield to deflect accountability and responsibility” for the controversial finding, which outraged Taylor’s family and has led to widespread protests and unrest in the city of just over 600,000 residents. They said his statements sowed “more seeds of doubt in the process.” They asked that other members of the grand jury be allowed to speak if they choose so that “the truth may prevail.”

Reports have emerged in the past week that have cast doubt about Cameron’s handling of the proceedings. One of these concerned the bullet that struck Sgt. Jonathan Mattingly in the leg during the raid, which Cameron said was fired by Taylor’s boyfriend, Kenneth Walker. Walker said he fired one round from his licensed handgun as a warning shot, believing that the “no-knock” raid was actually a home invasion robbery. The initial ballistics report from Kentucky State Police on the Taylor shooting failed to prove that the shot that wounded Mattingly came from Walker’s weapon, according to records obtained by Vice News. This revelation contradicts statements made by Cameron last Wednesday. 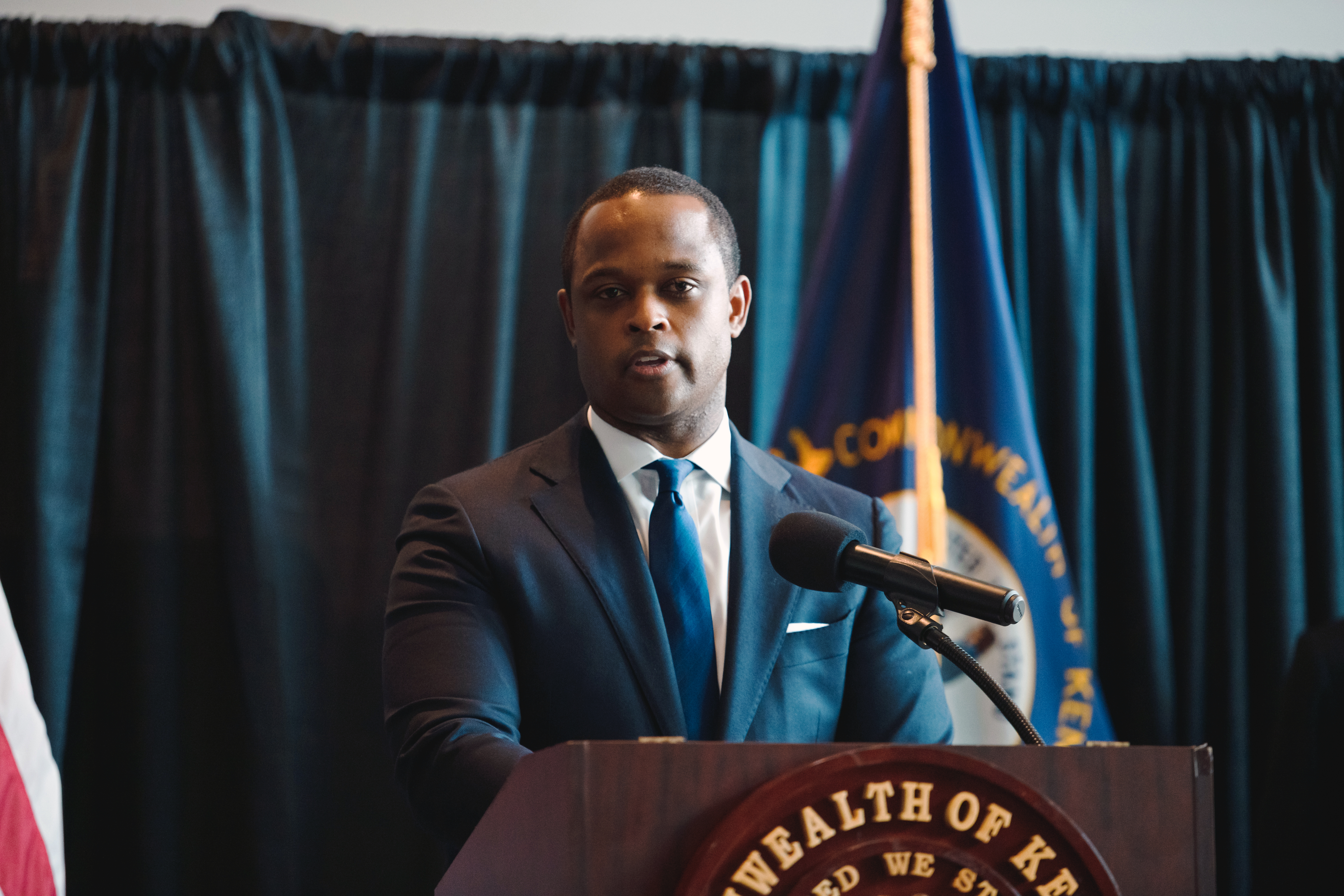 The report was included in the investigative file provided to the attorney general’s office by the Louisville Metro Police Department. The fact that Walker fired first appeared to have weighed heavily in the grand jury decision not to indict Mattingly, Officer Myles Cosgrove or former police officer Brett Hankison in the death of Taylor.

Steve Romines, one of the attorneys for Walker, said “the Kentucky State Police’s own ballistics report could not determine that Kenny’s shot is who hit Officer [Jonathan] Mattingly,” according to ABC News. While Walker, a licensed gun owner, admitted to firing a bullet, it may not have been the one that hit Mattingly.

Walker was initially charged with attempted murder of a police officer and held in jail for two weeks on a $250,000 bond, but those charges have since been dropped.

Hankison was indicted last week on three felony counts of wanton endangerment for firing shots into Taylor’s apartment that penetrated a wall of a neighbor’s residence.

At last week’s press conference, Cameron declined to provide details about the grand jury proceeding, telling reporters that the proceedings are done in secret. Attorney Benjamin Crump, who represents Taylor’s family, demanded the grand jury transcripts be released so the public could judge Cameron’s presentation of the case.

“Did he present any evidence on Breonna Taylor’s behalf?” Crump asked. “Or did he make a unilateral decision to put his thumb on the scales of justice to try to exonerate and justify the killing of Breonna Taylor by these police officers?”

Cameron, who was elected in 2019 with 55.3 percent of the vote, is a Republican who spoke at this year’s Republican National Convention on behalf of President Trump.

In the days since Cameron’s announcement, video evidence has been leaked online that raises more questions about the investigation into Taylor’s death. Video clips show what appear to be procedural violations that could have compromised the integrity of the investigation.

In a clip posted to VICE News, Hankison is seen entering Taylor’s apartment while investigators are inside working the scene after her death. The former officer’s presence at the crime scene would violate LMPD policies intended to keep officers involved in a shooting away from an active investigation. Additionally, none of the officers present for the raid are separated or paired with an escort, as required under LMPD policy.

More video from alleged body camera footage from the night Taylor was killed has popped up on Twitter and Facebook. In one, an unidentified officer walks to the door of Taylor’s apartment and asks, “Is anybody here dead?”

An LMPD official told Yahoo News in an email that they have no comment on the integrity of the case. “This file has not been released by the department at this time,” spokeswoman Jessie Halladay wrote. “Our internal review of this case is ongoing.”

Most evidence from the Taylor case has been kept under wraps. The family’s $12 million settlement of a wrongful-death suit with the city of Louisville included a stipulation that video evidence in possession of the Taylor family attorneys be destroyed.

But Black residents of Louisville overwhelmingly appear to view Cameron as an obstacle to justice in the case.

Taylor joined a growing list of Black people killed by law enforcement in the U.S., an issue that erupted into national consciousness when video was posted of a Minneapolis police officer kneeling on the neck of a non-violent, unarmed suspect, George Floyd, who died in custody. Since then, hundreds of thousands of Americans nationwide have taken to the streets to protest racial injustice and police brutality.

During this same time Cameron, a vocal Black supporter of Trump, has become a favorite in conservative circles. The former University of Louisville football player gave a glowing endorsement speech of the president at this year’s RNC and at one point was on the administration’s short list of potential Supreme Court nominees. Seen by many as a possible successor to Kentucky Sen. Mitch McConnell, Cameron has been slowly building his brand as the outspoken Black Republican ally of many top GOP politicians. At a time when Trump has politicized race relations, pointedly denouncing “Democrat” cities and states for failing to crack down on Black Lives Matter protests, Cameron’s politics have led some prominent Black leaders to charge he does not care about the Black lives of those who don’t share his political affiliation.

Tamika Mallory, a co-founder of the Women’s March, on Friday in Louisville called Cameron a “sell out” for not charging any officers in Taylor’s killing.

“Daniel Cameron is no different than the sell-out Negroes that sold our people into slavery and helped white men capture our people to abuse them and to traffic them,” she said. “That is who you are Daniel Cameron. You are a sell-out and … we have no respect for you, no respect for your black skin because all of our skinfolk ain’t our kinfolk and you do not belong to Black people at all.”

Yahoo News reached out to Cameron to be interviewed and he declined.

Many residents of Louisville interviewed by Yahoo News agreed with Mallory.

Karen Johnson of Louisville attended a protest for Taylor Saturday evening at Injustice Square in the downtown part of the city wearing a “Daniel Cameron is a sellout” shirt. “He’s a Black man first and he did not do right by a Black woman,” she said. “That’s why we are saying, we don’t like Daniel Cameron.”

“I know there are some undercover people who actually voted for this man, and they are humiliated and embarrassed to admit that they voted because of the color of his skin,” Louisville resident Felicia Garr said. She knows of many Black Kentucky voters who are embarrassed that they voted for Cameron just out of ethnic identity. (His opponent, State Senator Wil Schroder, is a white man.) “You reap what you sow. Now, we are lying in the bed that we voted for as a community.”

Christopher 2X, a local Louisville activist and executive director of Game Changers, an organization that promotes educational advancement for Black children, however, welcomes the opportunity to engage with Cameron.

“Someone’s got to have dialogue with him about issues,” 2X said. “And I don’t want to miss that opportunity if I can have it.”

2X is one of the leading forces in pushing to the FBI to continue looking into a federal probe into the Taylor case. He believes that this is one of the last possibilities for justice.

“People have been totally crushed by that [Taylor] decision, but the next step is an FBI investigation to look into whether Breonna Taylor’s civil rights were violated,” beginning with the request for a warrant to search her apartment, 2X said. “This starts from the starting point of putting together a warrant to take to a judge, to getting an execution on the raid to the time that she lost her life on the early morning of March 13th and in the aftermath.”

It’s a probe that 2X believes if pursued thoroughly and fairly has the best chance of being successful. 2X has been in communication with FBI officials who, he says, intend to press forward with the probe.

In the meantime, many Kentucky residents are anxious about what the outcome in this case means for the future of all races. To them, the change starts with justice for Breonna Taylor.

“We’re part of showing up for racial justice,” said Chris Crass, who is the father of two young white boys. “[We] are joining the movement for Black lives to say that we want a better future for all of our babies, for all of our communities, and justice for Breonna Taylor is a crucial part of that.”