Mr Farage’s movement claimed 33 per cent of the vote in the country, more than 10 points ahead of their nearest rivals.

The result marks an improvement for the Eurosceptic leader over his performance in 2014, when he came second to Labour as leader of UKIP.

Nationalist party Plaid Cymru were second in Wales last night, winning 20 per cent, comfortably ahead of Labour on 15 per cent. 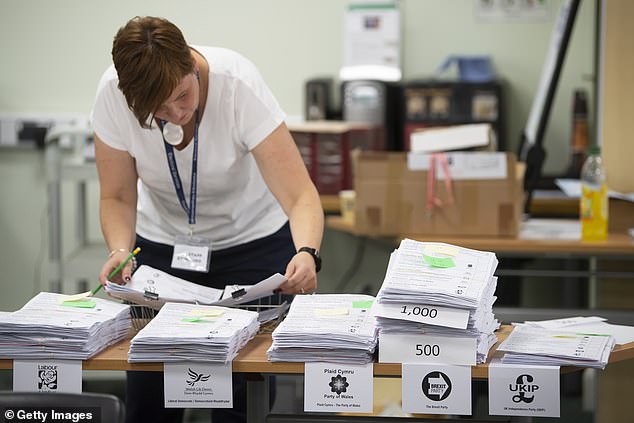 Ballot papers are counted at the Pembrokeshire Archives building in Prendergast, Wales. The Brexit Party won the European election in Wales with Labour third

The results mean the Brexit Party wins two out of four Welsh seats, Plaid one and Labour one.

Labour’s third-place finish is a humiliation for a party which usually dominates Welsh politics.

It has come first in every Welsh Assembly election since the body was founded and holds the most Welsh seats at Westminster.

In 2017 it won almost half of Wales’s votes at the general election, winning half a million more votes than the nationalists they have now fallen behind.

However, the country voted Leave in the 2016 referendum and now appears to have signalled its fury at Labour’s much-derided position on Brexit.

‘I will never forget that you voted to leave, even though those in Westminster have tried to silence your vote.

‘Along with James Wells I will be your voice in the European Parliament and we will get our Brexit.’

He added: ‘Wales voted to LEAVE! We knew what we were voting for and we still want to LEAVE. @brexitparty-uk is the only party committed to respecting the vote of the people of Wales.’ 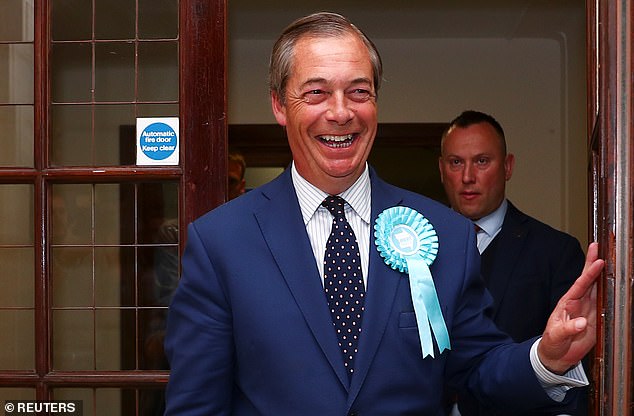 The result in Wales marks an improvement for Nigel Farage (pictured) over his performance in 2014, when he came second to Labour as leader of UKIP

The Liberal Democrats were fourth in Wales with just under 14 per cent of the vote.

The Conservatives were also embarrassed, dropping from third to fifth and gathering just 6.5 per cent of ballots.

UKIP, who were second with 28 per cent five years ago, dropped to only three per cent this time around.

The SNP topped the poll in the first four council areas to declare their voting figures – East Ayrshire, West Dunbartonshire, Renfrewshire and the Scottish Borders.

The Brexit Party pushed Labour into third in Renfrewshire, with Nigel Farage’s party securing 13.6 per cent, just ahead of Labour’s 13.2 per cent.

At the last European elections in 2014, the SNP secured 28.9 per cent of votes across Scotland, winning two MEPS.

Scotland was also strongly pro-Remain in 2016.

Some pro-independence politicians have argued for a new referendum on Scotland leaving the UK, saying they were misled in the 2014 vote into thinking they would stay in the EU.