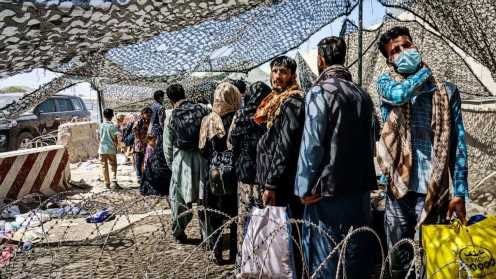 Bombings, death, and uncertainty — life in Afghanistan has become a nightmare for many Afghans looking to escape the country they call home.

Waheed Arian, a doctor and ex-refugee from Afghanistan, was born into war in 1983. He told ABC News that he didn’t know what “normal” life was as a child — and says he became numb to the daily rockets and bombs during the Soviet-Afghan war.

When he returned to Afghanistan, the civil war broke out in the early 1990s, bringing back harsh memories of his childhood.

“I became detached from reality,” said Arian, who now lives in the U.K. “I lost my appetite. I couldn’t sleep well and, on reflection, they were the signs of depression.”

The recent unrest back in Afghanistan has left many refugees and immigrants like Arian across the globe shaken, as they relive trauma from past violence in the country and experience renewed terror in the present.

Nightmares, stress and sweats continue to plague Arian, as he perpetually awaits news that his family is safe back home.

However, since the Taliban seized the Afghan capital of Kabul on Aug. 14, tens of thousands of people have fled the country. U.S. troops and other Americans in the country are continuing to withdraw as the Aug. 31 deadline appears.

Living in a war zone can have severe, long-term impact on civilians’ mental health, experts say.

“Everyone [in Afghanistan] is exposed to chronic fear and chronic vulnerability and deprivation,” said Kenneth Miller, psychologist and researcher at the advocacy organization War Child Holland. “It keeps people in a state of high alert perpetually. That wears down our bodies, our minds, and it leaves us vulnerable to getting sick and developing anxiety disorders and depression.”

Mashal Rahmati, a Hazara-Afghan immigrant in the U.S., said her family and friends back home live in constant fear. Rahmati said they can’t sleep — worried about rumors of random home searches and memories of past attacks on Hazara people.

The Hazara ethnic minority group has been a target of Islamic State attacks in the past, and there’s growing international concern for the small population’s survival as the Taliban takes control of the nation.

At least 1,200 Hazaras have been killed and 2,300 have been injured since 2015, according to Kabul-based Human Rights and Eradication of Violence organization.

“It’s incredibly re-traumatizing to the degree that I don’t think anyone really quite could understand,” Rahmati said. “For a lot of Afghans, this is the apocalypse. Our world has ended. Every single Afghan family knows someone killed by the Taliban.”

One in three asylum seekers and refugees experience high rates of depression, anxiety or post-traumatic stress disorder, according to research in the International Journal of Mental Health Systems.

Arian said that as a young adult, amid the civil war, he was given sedatives to treat his mental health issues, but said he had to stop taking them: “I couldn’t be sleepy — I had to be on my feet. I had to be alert.”

There are more than 26 million refugees across the globe — according to the United Nations High Commissioner for Refugees, an advocacy group for refugees — more than 2 million of which are from Afghanistan.

According to UNHCR, the Taliban’s takeover has caused up to 515,000 new refugees to flee, citing the Taliban’s history of brutal punishments, oppressive treatment of women and potential for retaliation against U.S and Afghan government allies.

Left untreated, these mental health conditions can have many long-term effects, according to Miller, like the deterioration of one’s physical health, violence against others, inability to work, focus or eat, and more.

But the issue of mental health isn’t over once refugees have been settled, researchers say.

“The people that live in Afghanistan love their country — they want to see Afghanistan prosper,” Rahmati said. “For the past 40 years, they’ve dedicated their blood, sweat and tears into building the country with international support … but right now it’s life or death for them.”

Refugee camps aren’t always safe either — as a refugee in Pakistan, Arian was living in a tent with his family — where illnesses spread quickly and he fell ill with tuberculosis.

Compounded with xenophobia and Islamophobia, refugees face many barriers to success.

Refugee children, in particular, are at a high risk of developing “psychological disturbances,” experiencing constant instability and danger from a war zone to their new country, according to research from the University of Oxford.

Ventevogel said its up to resettlement services and agencies to make sure refugees have culturally competent and accessible health services. Mental health care and mental illness is stigmatized in some cultures, he said, and these services have to account for hesitation or resistance.

“It is much easier for an Afghan woman to go somewhere to talk and have tea with another woman rather than to be referred to mental health specialists in a hospital,” Ventevogel said. “Providing counseling in logical places of access, ideally with people who understand their culture and background and know the language.”

Ventevogel said refugees aren’t always set up with jobs, secure housing or language learning services — but these kinds of services can help them build stability in their new life, in their new country.

“The most important things are to give people the chance to develop their life as much as possible in the way they would like, a feeling of autonomy,” Ventevogel said.

For now, Afghans around the world are left awaiting solutions to the ongoing chaos.

“We feel like the world is silent,” Rahmati said. “These are not just anonymous crowds, these are our family members.”