Four out of five London companies want flexible rail season tickets for their staff so part-time commuting can be made more cost effective, a survey has revealed.

Information collected from more than 500 companies in the UK capital found half had staff working from home to enable social distancing.

One in five has different groups working in offices on different days of the week, while two out of five introduced flexible shifts, according to the Chamber of Commerce poll.

It comes after the government’s plan for flexible season tickets to help part-time workers were paused over fears of the impact of a second wave of coronavirus. 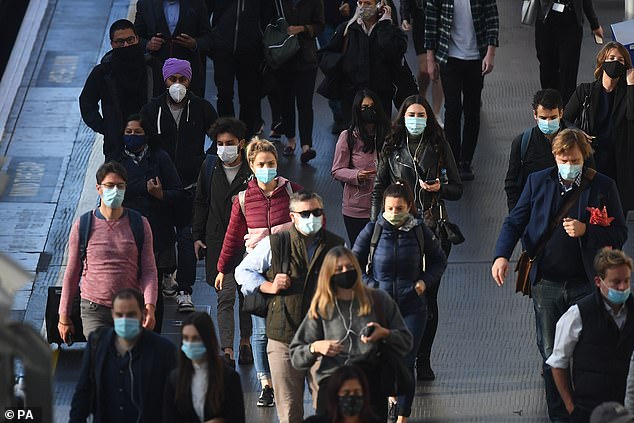 Commuters at Waterloo Station in London at 8.45am on Thursday, September 24. Information collected from more than 500 companies in the UK capital found half had staff working from home to enable social distancing

Richard Burge, chief executive of the London Chamber of Commerce, said: ‘Our polling shows businesses being creative and flexible in their approach to managing Covid-19 workplace restrictions, and they want to see the same when it comes to rail season ticket options for their employees.

‘We believe the wider introduction of carnet or part-time rail tickets for use across the Transport for London and London suburban rail networks is important during these times of a mix of office and home-working.’

The survey also found that just over a third of business leaders make their staff wear face masks in offices, while a similar number said they no longer have an office. 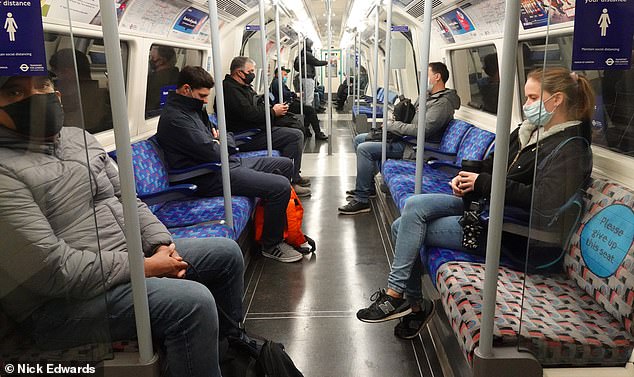 Passengers on a Jubilee line train on London underground network on October 2. It comes after the government’s plan for flexible season tickets to help part-time workers were paused over fears of the impact of a second wave of coronavirus

Speaking during a Commons adjournment debate last week, Conservative MP Greg Clark said a train ticket tailored to the needs of part-time and flexible workers should be introduced without delay.

Season ticket farce: Why it is cheaper to commute five days a week rather than three

He said it was ‘ludicrous’ that workers from his Tunbridge Wells constituency are still being subjected to the same fare structure since the 1950s.

And said commuters who pay daily fares of £39.90 to go into London three days a week must pay £5,626 – £700 more than those with season tickets who can travel five days a week.

Robert Nisbet, Director of Nations and Regions for the Rail Delivery Group, said: ‘The pandemic has been rocket fuel to already changing working patterns with fewer people than ever expected to return to the standard nine to five in the office.

‘We are working with government on short term solutions to encourage people back onto trains when the time is right but we firmly believe that only wholesale fares reform will deliver the kind of change passengers want and ensure they don’t need a crystal ball when buying a season ticket.’

Mr Clark urged ministers to allow for a more flexible system in response to the changing working patterns created by the coronavirus crisis.

‘The Covid pandemic, unknown to the world nine months ago, has required businesses, people and government to make huge and rapid changes to the way we live our lives with a speed that was unthinkable before coronavirus struck,’ said Mr Clark.

However Rail minister Chris Heaton-Harris said the Government is looking at the option of flexible ticketing in the future, but they need to observe the pandemic’s impact on commuting behaviour first.

‘For all of the tragedies and the privations of the last few months, it has been a time of agility and innovation in the way that we do things.

‘Yet through this period of the most tumultuous change that any of us have experienced during our lifetimes, one thing that has proved impervious to alteration, a monument to inflexibility, is the railway season ticket.’

‘He continued: ‘My constituents in Tunbridge Wells, High Brooms and Paddock Wood, if they take a Southeastern train to work in London face the same bill of fare that they’ve had since the 1950s.

‘They either have to buy a seven-day-a-week season ticket from Southeastern or they have to buy daily tickets at the highest fare for the journey with no discount for frequent and regular travellers.’

A spokesman for Great Western Railway told MailOnline: ‘Through the Rail Delivery Group (RDG) we (and the wider rail industry) have put forward proposals to the DfT to introduce flexible season tickets – a proposition discussed in parliament last week, and it is being considered by the Department.’

Mr Clark explained that travellers are currently faced with paying more to make journeys on fewer days of the week. 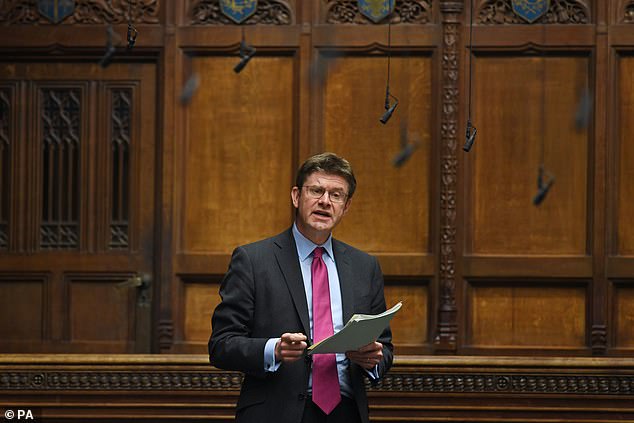 He told MPs: ‘The price of a daily standard peak return ticket is £39.90. This means that someone travelling three days a week to London for 47 weeks of the year must pay £5,626.

‘In other words, it costs over £700 more to travel three days a week than five days a week or even seven days a week. This is a ludicrous anachronism and an outrageous injustice that we have had the same fare structure for workers as we did in 1950.’

Mr Clark added: ‘It’s time now to make this change. It doesn’t have to be this way. If we can bring in a job retention scheme within days of the need being identified, if we can invent a scheme in July to help thousands of restaurants attract back millions of customers in August.

‘If businesses can switch to conducting meetings online virtually overnight, then surely we’re more than capable of introducing without further procrastination a train ticket to meet the needs of part-time and flexible workers.’

Chris Fowler, Customer Services Director for Southern said: ‘Flexible season tickets would, we know, be welcomed by many passengers, in particular those considering working from home for some of the week.

‘Even before the pandemic, we were in discussion with the Department for Transport about trialling a flexible season ticket on the Southern network, which was announced by the DfT at the beginning of the year.

‘Recently we have proposed a number of different technology options to the DfT that would help people wishing to travel only a few days a week, including smartcard and e-ticket solutions and we are awaiting a decision.’

Rail minister Chris Heaton-Harris confirmed the Government are looking at the option of flexible ticketing in the future but said they need to observe the pandemic’s impact on commuting behaviour first.

‘We are all well aware that improving our rail network is at the heart of the Governments plans to build back better and to boost Britain’s economy coming out of the pandemic.

‘Looking forward to the post-Covid recovery, we need to build a railwork which is fit for the future.

‘To deliver this, we are placing some focus on punctuality and performance, investing massively on infrastructure to level up the country and indeed considering how we can provide simpler, more flexible ticketing to deliver a better deal for passengers that works in the new environment that they will be travelling in. 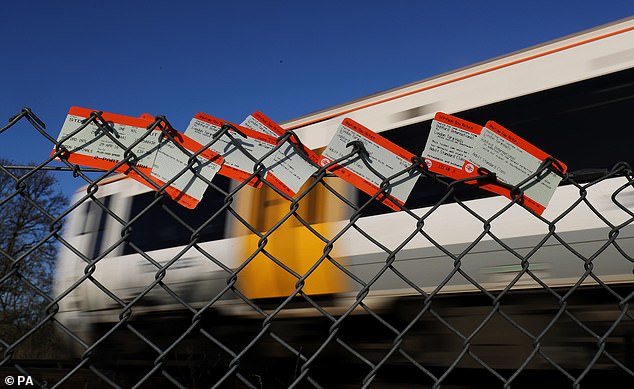 Someone travelling three days a week to London for 47 weeks of the year must pay £5,626

‘Flexible season tickets has long been an ambition of this Government, progress has been made with many train operators around the country having launched flexible products that can provide passengers who work or commute part-time with a better deal.

‘I appreciate how the lack of availability of flexible season tickets might be frustrating for some passengers.

‘The pandemic has led to a lot fewer journeys being made.

‘The Government recognises that the pandemic is likely to cause a fundamental change in the commuting patterns in the future and this is very likely to have long-term effects on commuter behaviour.

‘I think it’s quite difficult to judge now what would be the right product to tempt commuters back in our railways before we actually know how we are going to extract ourselves from a second peak in the pandemic’.

‘We can’t say at this stage what the long term impacts of the Covid-19 pandemic will be on commuter behaviour and we need to ensure any steps we take can flex and adapt to changing circumstances. ‘